This summer, the law returns to comic book stores — and it’s got something to say.

Writer Mark Russell is behind a relaunch of IDW Publishing’s Judge Dredd series, beginning with the four-part storyline “Under Siege,” which will see Dredd deal with trouble in a particular city block on the edge of the monolithic Mega-City One. For the writer, the series offers a chance to step into the role of sci-fi social commentator.

“Judge Dredd, like Dirty Harry before him, is a sort of referendum on the world of the moment,” Russell told Heat Vision when asked about what drew him to the long-running sci-fi character. “In the first Dirty Harry movie, the villain was a Manson-esque hippie protected by a liberal political system obsessed with civil rights. In the next movie, the villains were right-wing cops abusing the law to eliminate radicals. Dredd has been deployed with the same sort of ideological flexibility, but he inhabits Mega-City One, which, by any standards, is a much cooler setting than San Francisco.”

That’s especially true of Russell’s take on the futuristic city, which displays as much dark satire in its world-building as one might expect from the critically acclaimed writer of DC’s The Flintstones and Exit Stage Left: The Snagglepuss Chronicles.

“The bulk of the story takes place in Patrick Swayze Block, on the outskirts of Mega-City One, which, like many of our own tenements and housing projects, was built with the dream of providing decent low-cost housing, but without the political will to sustain it, it descended into the realm of living nightmare for its residents,” he revealed. “The urban planning aspect of Mega-City One has always fascinated me and it was definitely something I wanted to explore in this series. Also, the changing moods of society in terms of what should and shouldn’t be illegal: In my version of Mega City-One, the sport of football has been criminalized, but it’s perfectly legal to sell your organs on the open market. In fact, there’s a Kidney Hut in every mall and poor neighborhood.”

The new Judge Dredd series continues IDW’s relationship with Rebellion, the U.K.-based publisher of 2000 AD, the anthology series Dredd has called home since his debut in 1977. IDW has been publishing original content, in addition to occasional 2000 AD reprint collections, for the U.S. market since 2012, most recently the Judge Dredd: The Blessed Earth series.

The four-issue series, which has art from Micronauts and Slash and Burn’s Max Dunbar, has been in the works for some time, Russell explained. “Nobody knew who I was when I pitched it, and I’m only slightly less obscure now,” he joked. “There was a lot of revision and back and forth. We were like two middle-aged dudes haggling over a lawnmower. The whole process from pitch to approval took about a year.”

The result, the writer teased, is something that is as much about today as it is the America of the 22nd century.

“I’m not really interested in writing (or reading) comics that just riff on other comics or rehash their own tropes and mythology. To me, an art form is only interesting if it’s a conduit to your thoughts and feelings on the world and your place in it,” he said. “As such, I’m drawn to titles I think would make an interesting prism for my thoughts on the state of the world, the future of the human race and how our institutions are failing us. And if you’re going to watch the world burn, the futuristic decay of Mega-City One is a pretty ideal vantage point.”

Judge Dredd No. 1 will be available digitally and in comic book stores this May. Above is the main cover by Max Dunbar; below is the alternate cover by Alan Quah. 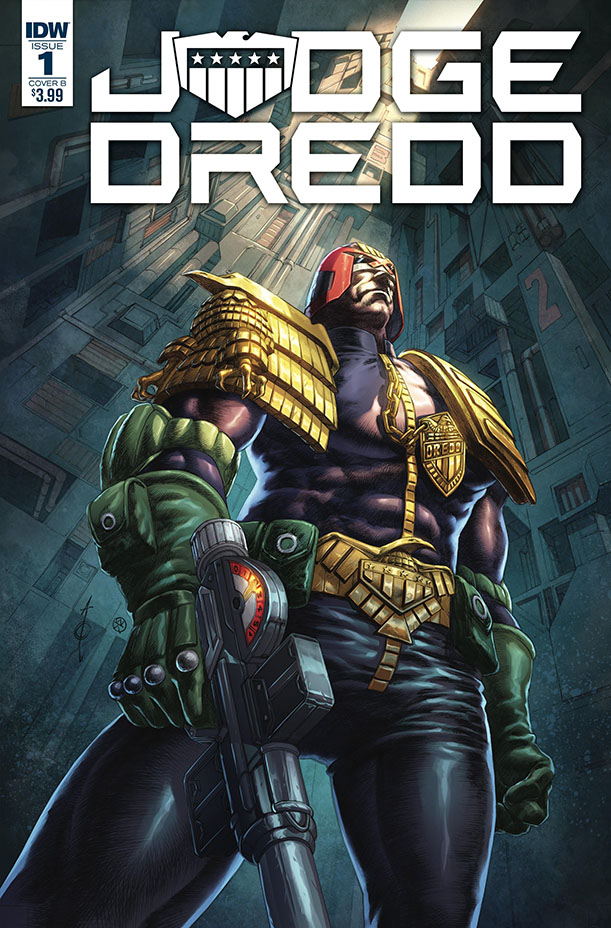