A small nose prosthetic is carefully applied, a brunette wig is fitted into place, a set of teeth are popped in, and before you know it, Renée Zellweger has made a remarkable transformation into iconic screen legend Judy Garland.

Zellweger plays Garland in her later years in Rupert Goold’s biopic Judy, a role that has earned her praise and frontrunner status in the best actress Oscar race.

For makeup and hair designer Jeremy Woodhead, less was more, he says, “to let Renée shine in her performance and not detract from it by overloading her with prosthetics.”

Judy, out Oct. 4 from LD Entertainment and Roadside Attractions, dramatizes the life of an aging Garland in 1968, a year before her death at age 47, as she arrives in London for a sold-out run at Talk of the Town nightclub. There was no shortage of references for Garland’s look, from photographs to onscreen performances and interviews, but Zellweger, 50, still required some meticulous work from Woodhead, whose credits include Stan & Ollie and Doctor Strange.

Renee Zellweger in NBC's 'The Thing About Pam': TV Review

The designer explains that Zellweger wore a small nose prosthetic and dental retainers that not only would alter the shape of her teeth to match Garland’s but also modify the way her jaw sat. The dental work was the trickiest, Woodhead says, because by 1968, Garland’s teeth were “quite gnarly.” He explains, “Had we been absolutely accurate, it would have been very distracting.” Zellweger needed to wear the teeth not only to act but to sing. 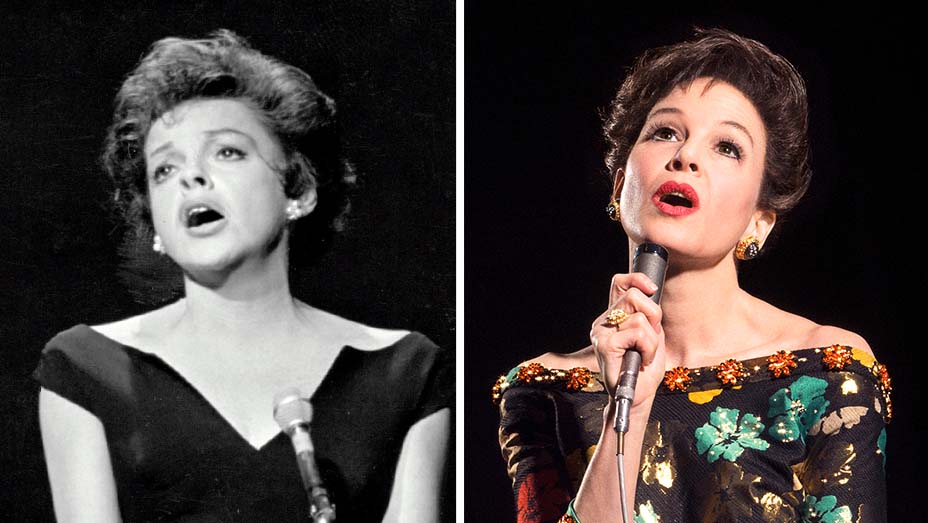 “Renée had a set of teeth that she could rehearse with,” Woodhead says. “She spent several weeks with these teeth and by the time we came to film, she was completely used to wearing them, so it didn’t impede her.”

He used shading techniques to further transform Zellweger, for instance giving her Judy’s cheekbones. “Most of the shading was trying to age Renée’s beautiful, flawless face into [Garland’s] more ravaged look,” Woodhead adds. “There’s lots of shading around the jawline to suggest that her face has dropped somewhat, and [we added] eye bags and creasing around the eyes.”

Woodhead designed makeup that would give the actress a stage look and a day look, both of which also would show Garland’s changing appearance. “Judy was of an age where she probably wouldn’t have gone out of the house without her lashes, eyeliner and lipstick,” he says. “There are always false lashes, eyeliner and lipstick, but when she is onstage, everything is heightened. The lashes are thicker, longer. The eyeliner is more dramatic, and the lips are a brighter red.” Additionally, the blue-eyed Zellweger wore brown contact lenses, and her eyebrows were reshaped to look “theatrical, and [it] also opened up Renée’s eyes to match Judy’s,” Woodhead says.

A wig of short-cropped dark brown hair wrapped up the transformation, which took 75 to 90 minutes to complete each day.

“She was a dream to work with,” Woodhead says of Zellweger. “She always [arrived] with a smile, and everyone got a hug. … I hope in some way my small additions helped her performance.”