[Warning: This story contains spoilers from Jumanji: Welcome to the Jungle.]

Nick Jonas joins forces in the jungle with Dwayne Johnson, Jack Black, Kevin Hart and Karen Gillan in Jumanji: Welcome to the Jungle — and it’s safe to say offscreen, the actor and singer is also having one wild year.

Jonas has gone from his usual routine of touring around the world with sold-out performances packed with the usual screaming fans, to filming Chaos Walking alongside Tom Holland and Daisy Ridley, and now transforming into a comedic action star with Jumanji.

He’s also most recently added Golden Globe nominee to his résumé after being nominated for his song “Home,” from the animated flick Ferdinand. The 25-year-old continues to have everybody talking. Hey, even Jack Black falls in love with him (onscreen).

Below, Heat Vision dialed up the actor to talk about said busy year, his role in Jumanji and what’s next. 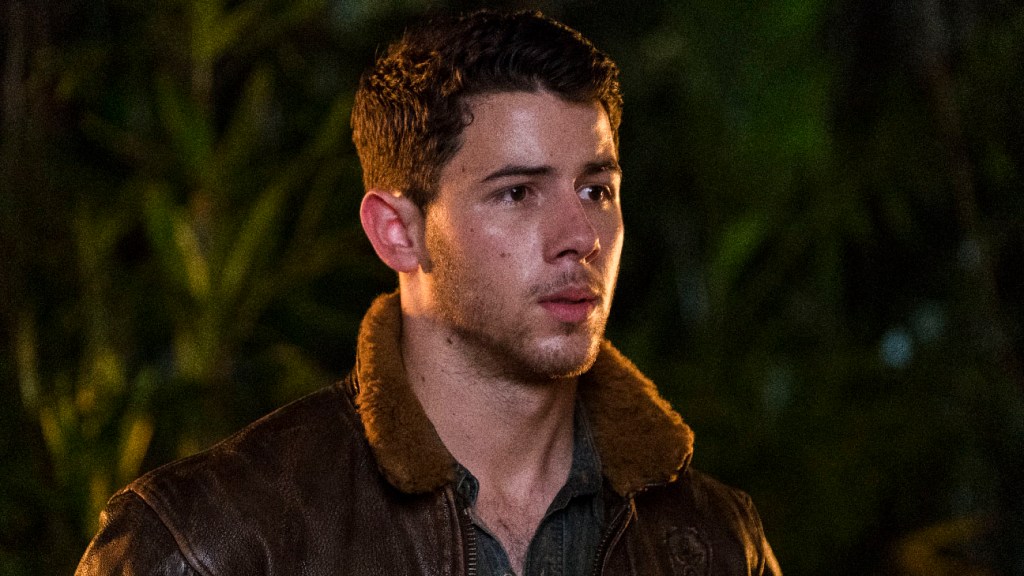 Thank you so much.

Have you been getting that a lot?

I have, but it doesn’t get old! It’s an incredible feeling.

What is the best thing about being a Golden Globe nominee?

Sort of the validation. As a songwriter, it feels like this is such an important moment just to sit back and say, “All right, of the 12 years of writing music and working on how to craft a song, this is a really nice validation and mark in that sense.”

The Oscars are obviously next. Have you been thinking about that at all?

A little bit. But I’m not stressed about it because it would amazing if it happens, but if not, it’s all good. And I guess the best way to approach it is to stay sane. (Laughs.)

Who are you looking forward to running into this awards season?

I was at the Met Gala this year with Armie Hammer, we sat at the same table and had a great time. Hanging with him again will be a good time, especially as we’re both in the mix in the way we are. It’s a cool thing.

Jumping in to Jumanji, what was your reaction to seeing the original when you were younger?

I was about 5 or 6 when I first watched it. I rented it at this place called the Blockbuster. (Laughs.) It freaked me out when I first saw it, like it did for a lot of people. And you fall in love with it and it became a huge part of my childhood. When I read the script I was blown away with the approach they were taking and the idea of this body swap. Being sucked into the game this time was a really fresh take and you get to work with these incredible actors. It was a dream scenario.

Did it make you nervous because of how much it will be compared to the original? What were the different pressures of that?

Once I found out that it was a reimagining and a new Jumanji adventure, that alleviated some of the pressure, because it’s about just telling your own story. There’s no way to compete with the original. It’s a beloved film by so many, and Robin Williams’ performance is truly brilliant. So for all of us it was about, “How do we take this beloved title and give it a fresh take and find a way to pay homage to Robin Williams’ character, Alan Parrish and his performance as a whole?” And I think we did that.

Which nods to the original film stood out for you?

When I first watched the film, when Alan Parrish as a young boy gets sucked in to the game, the way in which he gets sucked in was visually iconic. I liked that they kept that in this as well and did their own version of it in that element. And of course in the big tree house scene, the nod to Alan Parrish and the fact that he’s a guiding light for all of these characters and helps them along their journey is a really cool element.

What stood out for you about this project?

The best part was getting to work with these incredible actors. And spending time in Hawaii was not bad. Can’t complain about that! In addition to that, the challenging parts were that like any big-scale film like this. There’s a lot of moving parts and we had to get in every day and get as much done as possible. There were a lot of pieces to the puzzle, and thankfully it was all hands on deck and there was a lot of care. Everyone wanted to make the best movie possible.

You’ve been actively promoting the film on social media. There seems to be quite the dynamic between you, Kevin Hart and The Rock. Any fun stories from the press tour?

They have incredible chemistry that goes back quite a long time so finding my place within that on this press tour was both a challenge, but also really fun. They were awesome and said, “It’s probably really intense to jump in and find your vibe within this chemistry that we have, but you did it well and you’re a complement to what we do.”

What did your vibe end up being?

I took on the peace-maker approach. There needs to be a middle man between those guys! There’s a lot of bickering, and if you leave them alone for too long, it could turn ugly. I’m kidding. (Laughs.) 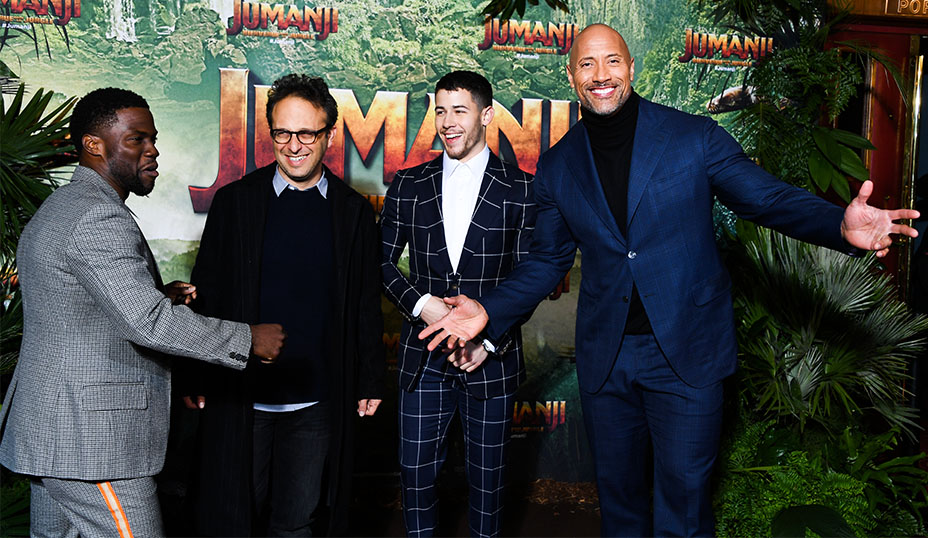 The four teenagers who get stuck in the game all represent different social groups. Growing up in your teen years, which of those characters would you say you identified with the most?

Martha, she’s a character that Karen Gillian becomes and is really in her head a little bit. She had a pretty bold worldview, and I was that way growing up. I’ve come into my own now as an adult, but you definitely carry some of that teenager with you.

You told me at the premiere that you’d love to switch lives with The Rock. Why is that?

It goes beyond just the work he does onscreen. He really applies himself in every aspect and has done an incredible job of making every environment on set, the press tours, whatever it is, something where everyone feels important and valued. That goes a long way with people. In addition to that, he’s incredibly charismatic. With this role in particular, you believe the whole time that he is this 17-year-old kid. He has these little nuances within the performance that really shine through and help tell the story in a subtle way in moments, but then brings it to the bigger scale of everything too. He stays completely true.

'Jumanji' Premiere: Why Everyone Wants to Be The Rock

You and Jack Black’s character have a little bit of a love story in the movie. What was it like having Jack Black fall in love with you?

Jack is very convincing (laughs), which is very funny. It’s one of his stand-out roles of his career. Playing opposite him was difficult actually because I was trying not to laugh the whole time. Our chemistry offscreen made it that much more fun.

Fans are talking about the CPR scene.

It was CPR! That’s all it was. It’s not a kiss. But it was awkward in moments. We both wanted to make sure our breath was OK. I think it was. It also felt like they did many more takes of that scene than any other scene in the movie.

What’s next for you and what roles are you looking to pursue?

I have a lot I want to accomplish and thankfully there’s some really good momentum at the moment on both the actor side of things and the music. I just finished another movie called Chaos Walking, which is a Doug Liman film with Tom Holland and Daisy Ridley. In addition to that, it’s more music in the beginning of next year, touring with Bruno Mars down in Mexico and just staying busy, finding great projects and enjoying this crazy ride I’m on at the moment.