[Warning: This story contains spoilers for Jumanji: Welcome to the Jungle.]

An interesting high concept motivates the plot and thematic concerns of lame kiddie action-adventure Jumanji: Welcome to the Jungle that’s not even in Jumanji, the spotty but adequate 1995 adaptation of Chris Van Allsburg’s picture book. Welcome to the Jungle‘s main source of novelty is its deviation from its source material’s central premise. While the first film — and Van Allsburg’s book — followed children who play a deadly board game that introduces jungle animals and natural elements into the “real” world, Welcome to the Jungle concerns an evil video game that transports reluctant teenagers into an imaginary jungle. While inside Welcome to the Jungle‘s version of the game, players inhabit the bodies of characters like Dwayne Johnson’s charismatic adventurer Smolder Bravestone and Kevin Hart’s whiny zoologist Franklin “Moose” Finbar.

Unfortunately, the makers of Welcome to the Jungle don’t do anything thoughtful or even clever with this fun body-swap premise. One should arguably not expect great warmth or delicacy from a kids’ film with a Guns N’ Roses song in its title. But this film struggles as much as it does because its creators rely implicitly on coming-of-age cliches and teenage stereotypes. This is the kind of movie that frequently tells you, through otherwise endearingly cornball dialogue, what it’s about — kids: you can become your best self even if you don’t like who you are now! — while practically endorsing another set of values entirely (kids: you can only feel good about yourself by role-playing as superficially attractive characters whose only positive qualities are skin-deep!). By trying to teach kids how to feel good about themselves, Welcome to the Jungle winds up making the original 1995 film look good simply for being a modestly successful Amblin-style Spielberg clone.

To understand why Welcome to the Jungle is as obnoxious as it is, you first have to look at the way its four hormonal characters are introduced. All four teens are lectured by their high school principal (Marc Evan Jackson) before they even enter the game world of Jumanji (also the name of the video game’s jungle). Bentley, Jackson’s preachy character, tells our heroes that they each need to think about who they really are, since they only have one life to live, etc. Bentley’s charges initially roll their eyes, like any good adolescents should. But as they get more involved in game play, they turn over what their principal said, and find the ostensible truth in his hackneyed words. Maybe he’s right: Maybe they should start making decisions that will make them more like the young adults they aspire to be rather than the immature pre-persons they currently are. Never mind that these kids aren’t even in college yet. They should get serious about their respective futures now, before they even have a chance to experiment with sex, drugs, and Slavoj Zizek!

Such is the general character arc prescribed to the film’s quartet of barely developed stock characters. The two teens who are defined exclusively by broad negative stereotypes must, of course, be humbled by serving as foils to their relatively less vain counterparts. Self-absorbed jock Fridge (Ser’Darius Blain) must learn to appreciate his estranged, nebbish ex-BFF Spencer (Alex Wolff). And snotty popular girl Bethany (Madison Iseman) has to take cues from misanthropic, uh, outcast Martha (Morgan Turner). There’s presumably some manner of reciprocity at play here, but it’s ultimately unclear what Martha gains from Bethany’s tips on how to flirt with boys or what Spencer learns from Fridge…at any time.

Still, let’s play along and see how these characters learn how to feel better in their own skins. Fridge’s big moment of clarity comes when he, in character, de-fangs a snake using Finbar’s innate zoological knowledge. Realistically, he saves somebody simply because he has the presence of mind to worry about other people. This would be impressive if the Crocodile Dundee-level animal care he displays were not just a temporary attribute magically bestowed on him by a haunted video game. 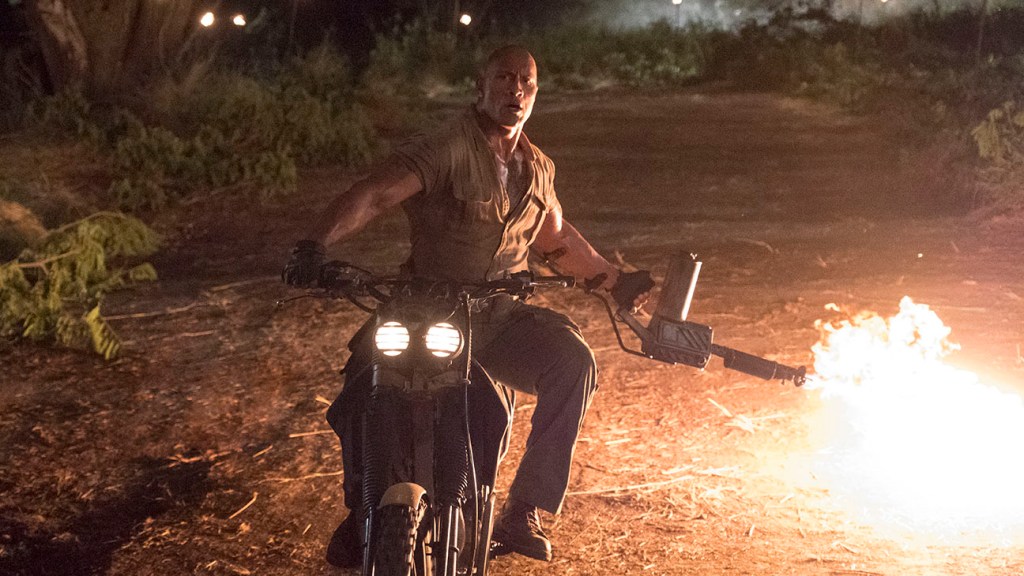 It would be even more impressive if Spencer, the main character that Fridge is used to prop up, weren’t such a bore. Spencer, playing as Johnson’s Bravestone, is supposed to be the emotional glue that holds the team together. But he’s rather aimless as far as moral compasses go. At one point, Spencer/Bravestone throws Finbar/Fridge under the bus — or helicopter, in this case — by forcing him to distract a herd of man-eating rhinos while he retrieves a precious jewel. This scene is especially dumb because it takes place after Fridge’s supposedly game-changing epiphany. Fridge hasn’t learned anything, so why should Spencer, a character whose big lesson seems to be, “Stop living in your friend’s shadow and ask a girl to date you”?

No, seriously, Spencer’s lack of self-confidence is cured simply by asking out Martha, a girl who, at the beginning of the film, he only seems attracted to because she mildly tells off her gym teacher.

At this point, we run head-long into a standard problem with brain-dead coming-of-age stories: weird-ness is considered to be an inherent value, while self-confidence is often considered an expression of vanity and self-absorption. Never mind that Spencer could probably learn a thing or two from Fridge about how to talk to Martha, or how to behave in a way that will make him feel so good about himself that he doesn’t need to date a girl to like himself. No, what really rankles here is that Martha’s defining pre-Jumanji attribute is her gentle leaning toward non-conformity. What do we even know about this kid other than she hates gym and thinks popular kids are dumb? Isn’t that basically every kid? 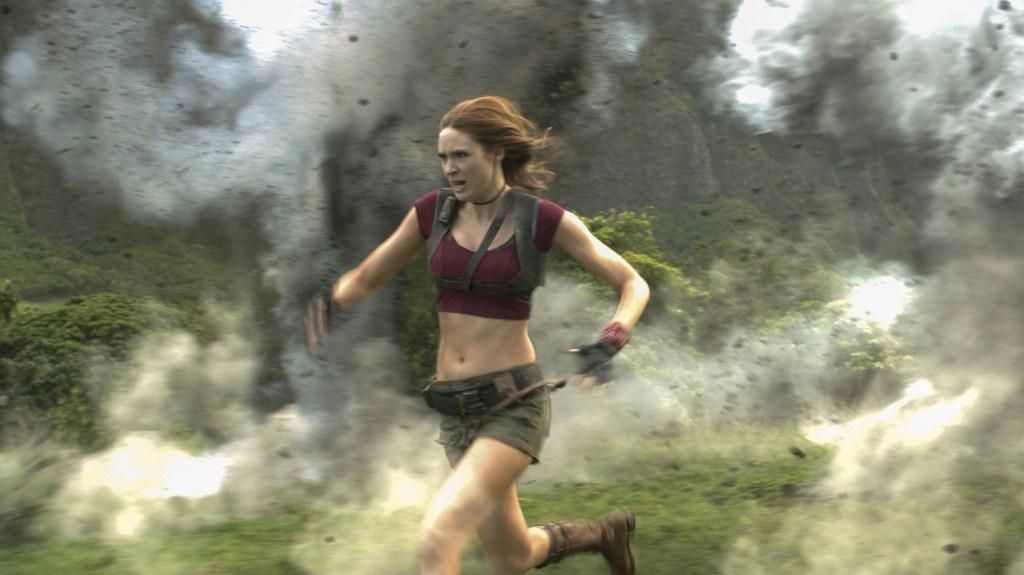 More specifically: Martha pre-emptively pushes people away because she doesn’t like herself, as Bethany diagnoses in one scene. So apparently the cure for what ails her is to assume the identity of generic lady badass Ruby Roundhouse (Karen Gillan) and “dance-fight” her way out of situations. Again, this is a cop-out solution, since the idea here is that, at film’s end, Martha feels empowered by abilities that she does not naturally possess. Which self is Martha supposed to believe in: the scantily-clad, karate-chopping stereotype that reeks of unexamined sexist values or the sassy teen girl whose character flaws are magically fixed as soon as she accepts milquetoast Spencer’s generous offer to date him?

Speaking of sassy teen girls: how about that Bethany, an annoyingly shrill form of comic relief who only exists to give Jack Black, playing overweeningly book-smart cartographer Professor Shelly Oberon, an opportunity to lisp and mince his way through a bunch of bad jokes about Instagram and mash-note-innocent crushes? Get this: some teen girls are, like, totally into their phones! And, like, they sound exactly like the Valley Girl stereotypes that were tired back when Frank Zappa batted at them in his aptly named 1982 broadside “Valley Girl.” Also, apparently, having a fat male comedian beg for help and lust after boys is instant comedy gold, as is evidenced by the way Welcome to the Jungle‘s writers keep running that particular joke into the ground.

Anyway, Bethany doesn’t learn how to be humble, she just mysteriously decides that she wants to…go on more hikes?

You may find Welcome to the Jungle‘s game cast charming enough to keep you interested for a little while. But eventually, the film runs out of fumes to coast on, and all you’re left with is a lot of desperate mugging for the camera. Again, one shouldn’t expect too much from a reboot of a 20-plus-year-old kids’ film. But the makers of this new Jumanji are so bad at following through on their only interesting idea that one can’t help but wish they were a touch less sanctimonious about believing in yourself, living your best life and all that jazz. Kids: don’t find yourselves in a retro video game! Go online and make some friends who you actually have to be responsible enough to be good to! Screw around, do what feels right for you and stop measuring your status with your hormone spikes! You’re great as you are, promise!

Karen Gillan Trained Even Harder for 'Jumanji' Than Her Marvel Movies

Karen Gillan Trained Even Harder for 'Jumanji' Than Her Marvel Movies