Jurassic World: Fallen Kingdom took the franchise out of the park and moved the story forward more significantly than any of the sequels to 1993’s Jurassic Park and has already grossed more than $700 million globally. So what’s next in Jurassic World 3?

First a quick refresher on what audiences just saw. Fallen Kingdom builds upon an idea introduced in 2015’s Jurassic World — that dinosaurs could be weaponized. The film sees shady characters from all over the world bid on dangerous dinosaurs, with most of those dinosaurs escaping into the northern California wild after the auction turns disastrous. As Jeff Goldblum’s Ian Malcolm says in the final moments of the film, the Earth truly has become Jurassic World — a planet where dinosaurs and humans will now be forced to interact. A post-credits scene also see pterodactyls flying around a re-creation of Eiffel Tower on the Las Vegas strip, so it’s clear some of the swimming and flying dinosaurs from the island made it to other parts of the world as well.

Jurassic World director Colin Trevorrow, who wrote Fallen Kingdom with writing partner Derek Connolly, will return to the director’s chair for the third installment hitting theaters June 11, 2021. This time around, the franchise is getting a female perspective, with Pacific Rim: Uprising screenwriter Emily Charmichael penning the script with Trevorrow. Dr. Malcolm’s worrying designation of a new Jurassic World maybe shouldn’t be taken literally; the Earth is not about to be overrun by dinosaurs, considering only about a dozen of them escaped, all of them different species, and all of them female, so they likely aren’t going to be mating to produce more dinosaurs that will suddenly overrun the world. Don’t expect Jurassic World 3 to be a post-apocalyptic adventure. 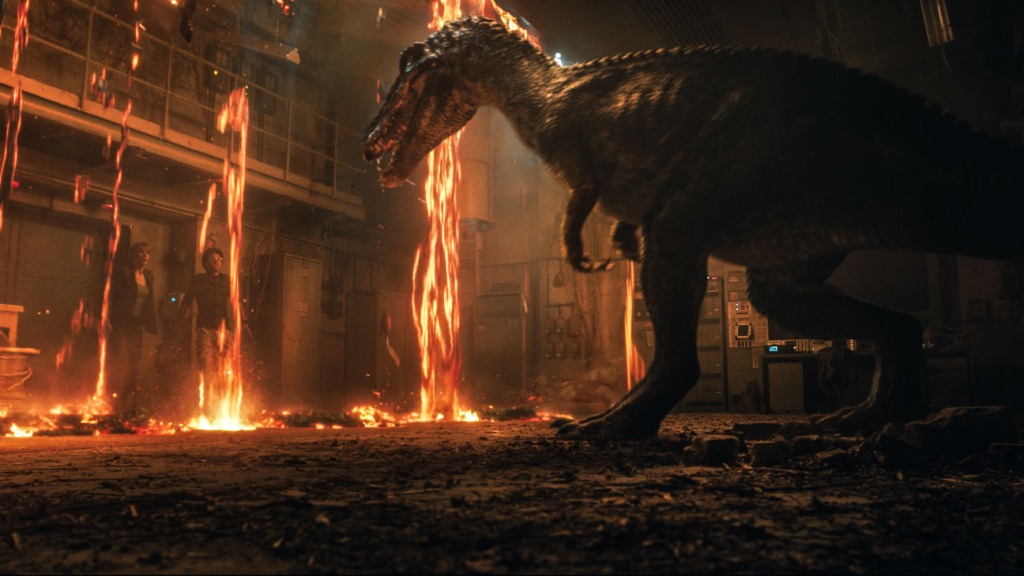 It seems more likely that Jurassic World 3 will further explore the notion that Dr. Malcolm suggests: the wars of the future will be fought with genetic weapons. Pandora’s box has been opened, and the technologies that made dinosaur resurrection popular may spark an arms race that fundamentally changes the world. We also saw that it’s not just dinosaurs that are being genetically engineered, as the character of Maisie (Isabella Sermon) is actually a clone of Benjamin Lockwood’s (James Cromwell). The franchise could even expand to ask questions of human resurrection, as well as dinosaur resurrection.

Dr. Henry Wu (BD Wong) escaped the film with untold amounts of knowledge — and will undoubtedly be using it to create more genetically enhanced dinosaurs like the Indominus Rex of the first Jurassic World and the Indoraptor. It’s almost guaranteed a third hybrid dinosaur will be introduced in the next installment.

There’s also an intriguing opportunity for Jurassic World 3 to take a play out of the recent Planet of the Apes trilogy, in which the apes actually became the protagonists, not humans. Fallen Kingdom establishes Blue as perhaps the most valuable living organism on the planet. She could be exploited and forced to raise and lead an army of dinosaurs, but perhaps she could also be used to help usher in a society of peace-loving velociraptor’s, similar to how Andy Serkis’ Caesar shows the apes their true potential.

Fallen Kingdom made the audience empathize with its dinosaurs in a way not seen since Steven Spielberg’s Jurassic Park made audiences tear up with a sick triceratops. Director J.A. Boyena explored Blue’s adorable upbringing — and her empathy — and also highlighted the pathos of what a second dinosaur extinction would mean with a shot of a Brachiosaurus waiting for its death on the dock as our heroes sped away on the final boat off Isla Nublar. Continuing to emphasize the unexpected humanity of dinosaurs would be a way to keep the third installment fresh.

Goldblum’s Malcolm asks an unintentionally meta question at the end of Jurassic World: Fallen Kingdom: How many times must we see what happens when humans play god with dinosaurs? Indeed, after five movies, audiences may be asking themselves the same question.  Fallen Kingdom took concrete steps to move the story forward, something few other Jurassic titles have done, and the third installment — if it plays out on a more global scale — may have something new to say after all.

For more Jurassic World 3 theories, watch the latest episode of Heat Vision Breakdown at the top of the post, with a special appearance from some of Mattel’s new Jurassic World: Fallen Kingdom gear.

How 'Jurassic World' Made Claire Its Most Evolved Character