The nude heels that Bryce Dallas Howard’s Claire Dearing wore throughout 2015’s Jurassic World launched dozens of essays about how impractical and inane — if not sexist — they were. And her footwear in Jurassic World: Fallen Kingdom — high heels in civilization and combat boots in the jungle —is drawing a lot of focus.

But that narrow view overlooks that Claire, the park’s former operations manager turned animal rights advocate, is one of the most evolved humans in this franchise. Unlike a lot of the other characters, she adapts to her circumstances and learns from her mistakes.

The Jurassic Park films overall don’t evolve as much as the audience does. They posit questions about the ethics of genetic engineering and our impact on the world, but the setup always is the same: Characters behave stupidly, and dinosaurs run amok, doing what they do best. It’s a grand spectacle that rewards anyone who ever stared in awe at fossils and tried to fathom these creatures roaming the Earth.

Laura Dern’s Ellie Sattler is the strongest female character in the series (other than the dinosaurs). Ellie barely had any depth in the Michael Crichton’s best-selling book, but in 1993’s Jurassic Park, she rolls up her sleeves and gets down to business. She searches through a mound of Triceratops poop to find what’s making a dinosaur ill. She volunteers to look for the adults and children stuck in the wild once the park’s test weekend goes south, and she steps up to accompany the game warden to a maintenance shed to restore power.

Everyone remembers how she scolds park owner John Hammond (Richard Attenborough) for his “sexism in survival situations,” but the whole park is built on a sexist note. All the genetically engineered dinosaurs are female.

“There’s no unauthorized breeding in Jurassic Park,” explains geneticist Henry Wu (BD Wong), who turns up yet again in Jurassic World and Fallen Kingdom, inexplicably having learned nothing about the perils of messing with nature. 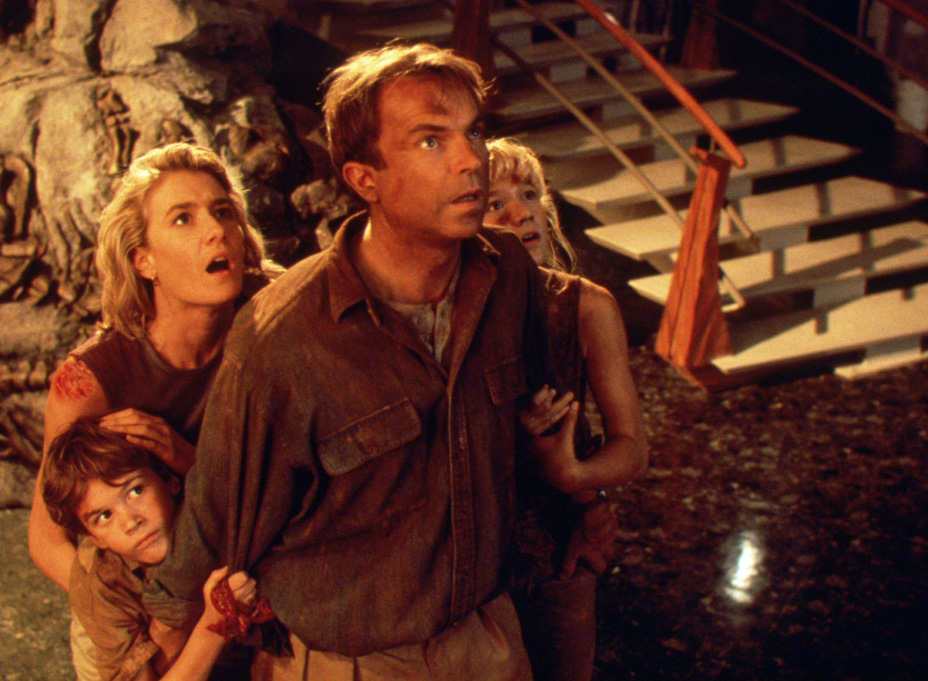 None of the female characters in The Lost World: Jurassic Park (1997) or Jurassic Park III (2001) made as strong an impression as Claire, first seen in Jurassic World in a pan up from those pesky heels. Dressed in a white skirt and blouse with a blunt-cut bob, she exuded authority. Despite the criticism online, the heels made sense for someone who ran the place and met with corporate sponsors about different exhibits.

Claire takes off the blouse — she has a purple tank top underneath — and her hair becomes unruly as the film progresses, but she never ditches the shoes, even when outrunning a T. Rex. Director Colin Trevorrow recently told Uproxx that he’s thought a lot about imagery and messaging since that film’s release because of the criticism. Yet he also pointed out that he was respecting Howard’s choices about the character. 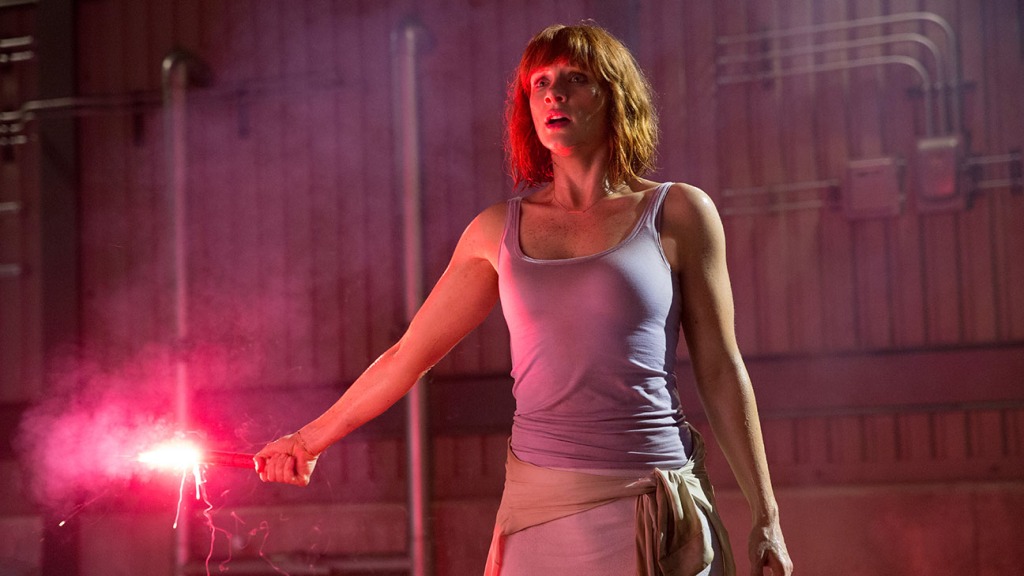 Rather than the heels, the real problem is all the carping the first Jurassic World throws Claire’s way. Her sister (Judy Greer) foists her nephews (Ty Simpkins and Nick Robinson) on her to get them out of town during divorce proceedings, then tells Claire she’ll understand once she has kids. Her boss (Irrfan Khan), the park’s owner, tells her to loosen up while he shows off his helicopter-piloting skills. But who’s running the place while he’s taking lessons? Even Chris Pratt’s dino wrangler and love interest Owen Grady, who clashed with her on their first and only date, comments about how she’s controlling and makes hand gestures for getting it on.

Maybe those heels were worn out of spite.

“She doesn’t have to be in menswear and flats in order to outrun a T. Rex. That’s what women can do,” Howard told Cosmo.

Even so, Howard welcomed the comments about Claire, calling them feminist, noting that “people are seeing that there is a kind of lower tolerance for vapid, meaningless, only functional female characters …. We want the real world and the realities of the real world reflected in movies that we see, and audiences are not tolerating anything other than that.”

Jurassic World: Fallen Kingdom reintroduces Claire with her footwear first — black heels, a bit of the old Claire’s personality (and perhaps a jibe at the criticism). This time she wears jeans and a trench coat, her longer hair pulled back in a ponytail.

Three years after the events of the previous film, the corporation that owned the park has paid out millions in damages to guests, and animal activists picket Capitol Hill about dinosaurs’ rights. In a poor bit of planning, the theme park was built on an island near a volcano that’s about to erupt, which will kill the dinosaurs.

Claire works with a group lobbying Congress to help relocate the creatures. Meanwhile, Jeff Goldblum’s Dr. Ian Malcolm, the chaos theorist from the original film, testifies against this. “We altered the course of natural history. This is a correction,” he says. Congress rejects a rescue, but Claire finds a sympathetic ear in Benjamin Lockwood (James Cromwell), a long-ago friend and business partner of Hammond’s. He provides his own team, trucks, and other resources to relocate eleven species to another island as a sanctuary.

Letting these creatures live in peace was “all John Hammond’s dream,” Lockwood says in a bit of revisionist history. (In Jurassic Park, Hammond made money by showing children mechanized rides in a flea circus. He called the dinosaurs “attractions” unlike anything the world had ever seen.)

In any case, Claire seeks out Owen, who had trained a squad of female raptors and has a special rapport with Blue, one of those he’d raised from a hatchling. By this point, Claire and Owen have tried and failed at a relationship. (She ignores his jibes about whom she’s dating and laughs heartily at his thinking of their breakup as his idea.) She urges him to tap into his paternal feelings for Blue. “You’re a better man than you think you are,” she says.

Claire’s persuasion works, and soon they’re in the jungle again. She wears combat boots and cargo pants. She’s as bright as ever, tapping codes into long-dormant computer systems and climbing through hatchways, again handy with a gun, and even helps Owen draw blood from a sedated T. Rex.

Of course, the relocation isn’t all as it seems. Lockwood’s underling Eli Mills (Rafe Spall) wants to auction off the dinosaurs for billions, as well as turn some into weapons that can be controlled. Eli sneers at Owen for never realizing his gee-whiz wonder over training raptors could have another use. He also mocks Claire. “You authorized the creation of the Indominus Rex,” the previous film’s hybrid dinosaur. “You exploited a living thing for money. How is that different?”

Claire doesn’t disagree, though Owen tells her not to take all the blame. “I showed them the way,” he said.

In a film short on overall character development — there’s the surprise of a cloned person in the third act — Claire’s efforts to make amends ring true. Having gotten close to creatures she once thought of in terms of focus groups and park attendance, she feels responsible for her actions and their lives.

Late in the film, faced with a situation that will kill the rescued dinosaurs, Claire’s first instinct is to release them. Then she hesitates. Our world isn’t an island unto itself. Maybe dinosaurs and people aren’t meant to coexist after all. Maybe they’re better off alive in the imagination.

It’s a rare moment in these films when someone thinks of the consequences.