The franchise had lain dormant for more than a decade, but the 2015 film roared back with a new set of characters and a new park. The story largely ignored both 1997’s Lost World: Jurassic Park and 2011’s Jurassic Park III, instead setting up a situation where the public had embraced the genetically modified dinosaurs that inhabited an island theme park. Now, Chris Pratt and Bryce Dallas Howard are back for even more dino-mayhem.

To sell this year’s Jurassic World: Fallen Kingdom, Universal has engineered a campaign that combines much of what made the 2015 series revival a hit with audiences. The new movie has already received a mixed 57 percent score on Rotten Tomatoes but is expected to bring in $130 million-plus this weekend, which would make it the third-biggest opener of 2018 behind Avengers: Infinity War and Black Panther. The title has already grossed $372 million overseas, where it opened early in order to avoid direct competition with the World Cup soccer tournament.

The first teaser poster was revealed almost a year ago in July 2017, announcing the subtitle of the movie at the same time. As with all the Jurassic movies, it used the familiar logo with the T-Rex skeleton. This time the rest of the poster is filled with embers falling all around it, indicating that chaos was in some manner ensuing. Using “Life finds a way” as the copy point also hinted at the return of Jeff Goldblum as Dr. Ian Malcolm, who hasn’t appeared in the series since 1995’s Lost World: Jurassic Park.

The next couple posters took us right into the action. One featured a wide shot of the T-Rex roaring as the volcano erupted behind it and other dinosaurs ran away around it. The other zooms in for a close up of Howard and Pratt huddling behind one of the rover balls for safety amidst that chaos. Both declare “The park is gone.”

An IMAX-exclusive poster showed a T-Rex holding one end of a ladder that’s been lowered from a helicopter, with an unidentifiable human being stuck in the middle of that tug-of-war and trying desperately to hang on. On the Real 3D poster the leads are seen looking at something off-camera to help remind people of what is really the core relationship in this series. For Dolby Cinemas the same pair is shown but this time Claire is added, the camera positioned inside the open mouth of a dinosaur apparently hunting them.

The real champion of the posters, though, is the eye-popping, over-the-top Fandango poster, which assembles a whole group of dinosaurs like they’re the Avengers, the exploding volcano in the background and the movie’s title treatment in front of them.

Howard’s Claire and Pratt’s Owen are reuniting as the Dec. 7 first trailer (54 million views on YouTube) opens, quickly establishing that their romance at the end of the first movie didn’t last. They’re still sparring verbally but she needs him to come with her back to the island because a volcano is about to explode and the dinosaurs need to be rescued. “Life … finds a way” we hear as it ends.

Universal released a number of teasers to build anticipation for that trailer, using new footage and clip complications from the earlier films in the series. Some took a more meta approach, showing Pratt and Howard reviewing marketing materials before things get weird. Some were more along the lines of a behind-the-scenes featurette.

The second trailer (27 million views on YouTube) on Feb. 4 was actually run as an extended TV spot during the Super Bowl. It starts out with a dinosaur encroaching on a small child who huddles in bed, afraid of what’s coming. Cut to Claire asking if Owen remembers the first time he saw a dinosaur and the feeling of awe he had.

The final trailer (21 million views on YouTube) on April 18, once again preceded by a number of teasers like this, offers much more of the story. Claire is convinced to return to the island by someone claiming they just want to rescue the dinosaurs remaining on the island, enlisting Owen because they want to save raptor Blue as well. It turns out that was all a cover story for a bunch of greedy capitalists who want to sell them off as weapons or use them for their own purposes.

Universal rolled out a website, complete with promotional video, for the Dinosaur Protection Group, an organization founded by Claire to educate the public about dinosaurs and preserving them for future generations, quite the 180 from her mindset in the first movie. The group also had its own social profiles and email newsletter for those that wanted to stay informed. A later video encouraged viewers to support the program by adopting a dinosaur just like zoos and other institutions do. The organization also felt the need to release a video refuting some of the concerns people might have had about the dangers of keeping dinosaurs alive.

The studio also partnered with game developer Ludia to create Jurassic World: Alive, a mobile AR game that has people hunting dinosaurs in the real world and engaging in their own genetic experiments to accumulate points and gain more abilities. A Jurassic World: Blue VR series was announced during Facebook’s F8 developer conference, with the trailer for that series showing off what players/audiences could expect.

The collection of TV spots, which were also used as social media and online ads, present slightly different aspects of the story in order to make unique appeals to the audience. Some emphasize the dangers of unleashing genetically-modified dinosaurs upon the world or the mission to save Blue. Another plays – at least in its first half – like an old-school thriller with just the threat of danger before the dinosaurs start rampaging.

The biggest of the cross-promotional stunts engaged in for the movie involved a partnership between Universal, Amazon and Jeep.It was teased in late May with a promotional video from Amazon featuring a Prime worker discovering a package with some very unusual contents. As later photos showed, the package featured an Amazon “SmileCode” that, when scanned with the Amazon app, took viewers to a landing page with a variety of Jurassic movies and products to buy. Jeep and Amazon then drove a flatbed truck with the same kind of massive package on it around Los Angeles.

The contents of the package, a massive T-Rex model, were then revealed a week or so later at an early-June event featuring Pratt and Howard. Throughout the effort the “#AmazonFindsAWay” hashtag was used to focus updates and nod toward the famous line from the original movie.

A bit before that, in late May, the T-Rex in a box idea was used in London as the massive model was floated down the Thames.

In addition to that, partners included:

? Amazon Alexa, which let users ask about the movie and hear a promotion for “Jurassic World Revealed,” short audio series.

? Jeep, which started out by running its own commercial during the Super Bowl.

? Doritos, which launched a campaign involving Dr. Wu, played by B.D. Wong, trying to create a massive chip that also included a hashtag-based sweepstakes giving the winner one of the monstrous snack chips.

? Comcast, which enabled ticket-buying through its X1 set-top box via Fandango, which it owns along with Universal Pictures. It also offered exclusive clips and other content in its Xfinity On Demand service. 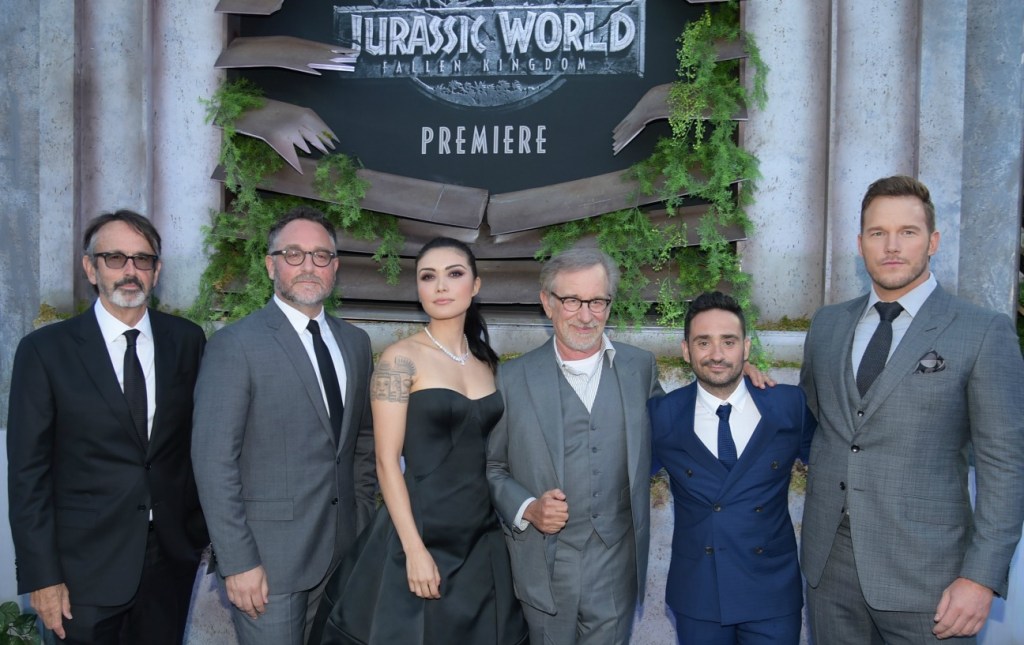 To encourage the audience to see the movie on the biggest of screens, promotional spots and interviews were created exclusively for IMAX. There was a continuous beat of featurettes and other behind the scenes videos like this one that offered some of the filmmaker and talent talking about the history of the Jurassic franchise and what this movie is doing differently to help present it to the audience and explain the story a bit more clearly. A whole series of “Jurassic Journals” featured Chris Pratt taking viewers behind the scenes to show some of the technical aspects of making the movie.

The studio kept up a steady beat of featurettes like this one, which teased how there were going to be more dinosaurs than in any previous Jurassic movie. Pratt and Howard filmed a short “Funny Or Die” video as a different version of their characters trying to take Blue aboard a plane as a service animal, something that doesn’t go well. Along the same lines, Goldblum appeared as himself in a “don’t talk during the movie” video for the popular Alamo Drafthouse theater.

Universal noted on May 10 that the popular Jurassic Park ride at Universal Studios Hollywood would be shutting down, teasing its replacement by a Jurassic World version that would presumably feature updated thrills that bring in elements from the new movies.

Even more so than it did for the 2015 revival, Universal has leaned into the history of the Jurassic franchise to help sell this latest installment. A number of technology-based tactics, particularly the AR games and more, combined with big stunts like the Amazon/Jeep campaign, have been designed to keep audiences engaged with the brand right up to release.