The first trailer for Jurassic World: Fallen Kingdom has sparked quite a reaction online. Dinosaur enthusiasts are both cautiously optimistic that the sequel can live up to 2015’s Jurassic World, which was so successful that it still stands as the No. 4 movie of all time worldwide. Others are feeling, well, less optimistic. The team at Heat Vision has assembled to take a closer look.

Graeme McMillan: I know this wasn’t meant to be my takeaway from the trailer, but opening on Bryce Dallas Howard and Chris Pratt fighting again just made me think, “Wow, you two shouldn’t be the primary romantic couple of this series if you keep breaking up between movies.” Is it a bad idea to open your first trailer with two people who have no discernible chemistry fighting? Is it supposed to make us look forward to seeing the dinosaurs?

Ryan Parker: Oh, wow. I kind of liked that opening, actually. It was different and it set a tone I wasn’t expecting. That said, as soon as Pratt said the island was “exploding,” I checked out. I mean, come on, what an eye-roll plot device. He even says the line like he knows it is lame.

Patrick Shanley: In the movie’s defense, the plots for Jurassic Park sequels always involve an improbable demand. Why would anyone without a Tyrannosaurus-sized death wish ever willingly return to an island full of dinosaurs after barely escaping from that island in the first place? The premise itself is flawed, so why not have an exploding island.

Abid Rahman: Full disclosure, I’m a Jurassic Park fanatic (I even have a fondness for JP3) but I’m with Graeme a little on the opening. The film’s strapline is the now iconic “life finds a way,” but judging by the first 20 seconds, it feels more like “strife finds a way” as we see more of the rather annoying bickering between Pratt and Howard. Stop trying to make these two happen. But, then again, you have dinosaurs and Jeff Goldblum so Universal can take my money now.

Lee: Okay, yes, the trailer seems to be drawing mixed-to-negative reactions here, but let’s celebrate its objective win: Bryce Dallas Howard’s heels have been sensibly swapped for below-the-knee boots, perfect for gallivanting across a muddy island with deadly dinosaurs! 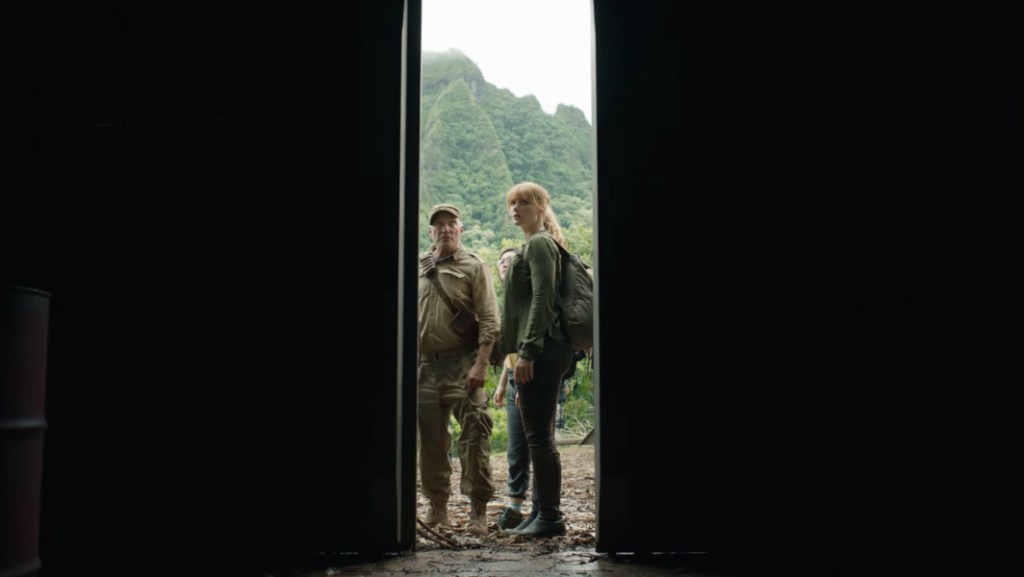 McMillan: While you have to give the franchise points for consistency, was I the only one who had a sense of “Eh, seen it” about this trailer? It felt like everything was a rehash of things we’d seen before, which seems especially odd considering the premise of the movie being something different? I would’ve been far more interested in seeing more about the rescue mission than watching a T-Rex roar again, or having another Chris Pratt-goes-Crocodile-Dundee-on-a-Raptor moment. (Although, sentimentalist that I am, I’m glad Blue’s still around.)

Parker: I, too, was so underwhelmed with this trailer. I was a kid when I saw the original Jurassic Park in the theater three times and it was mind-blowing. We are so spoiled now with the quality of special effects, it is hard to be impressed. So, there needs to really be a kick-butt story to go along with the visuals. Seeing the dinosaurs running around and flying, and the T-Rex roar was just “meh” for me, too.

Lee: I didn’t grow up with the original Jurassic Park and actually liked Jurassic World quite a bit, and I’m also left with a “been there, done that” impression. However, there must be more than what’s here. I have faith in J.A. Bayona, who directed the heck out of Liam Neeson as a tree in A Monster Calls, one of last year’s most beautiful and technically ambitious movies. He vowed to make the dinosaurs using a stealthy combination of animatronics and CGI, versus the CG-centric dinos of Jurassic World. Gotta say, Fallen Kingdom‘s creatures have won me over (hello, triceratops!)

Rahman: Look, let’s be frank, you go to see a Jurassic Park franchise film for the dinosaurs, and they’ve spared no expense on the effects. In these cynical seen-it-all-before times, the effects may not elicit the giddy excitement they once did in those halcyon pre-Reddit times when we were all so young, so innocent and so not ready to hate on everything, but come on! Dinosaur-on-dinosaur action! Let’s all dream again.

Shanley: Pratt can pull off a vest in ways most of us men can only dream of, but you’re right, he and Howard aren’t the main draws, the scary dinosaurs are. This trailer packed so many dinos into its two-minute run time I honestly felt like I was watching a “live-action” Land Before Time remake. If I have to explain how that’s a good thing, then you clearly have no business seeing this film.

McMillan: The highlight of the trailer for me was certainly Jeff Goldblum, who might just have been repeating lines from earlier movies — or so it seemed, but I’ll bow to anyone who knows better — but had more of a presence than any other human onscreen. It did look like he was entirely surplus to the primary plot, but I hope the footage we saw is seconds before he gets in a helicopter and flies to the island so he can talk down a volcano. This is what I want, Jurassic World: Fallen Kingdom. Don’t let me down.

Lee: I’m very into the sparse but strong Jeff Goldblum moments. I also would watch a whole movie of Dr. Ian Malcolm on the stand.

Parker: OK, I disagree here. I was so disappointed with how they are using Goldblum. I was THRILLED when I heard he was returning to the franchise. But to see him just talking to a committee… Ugh! I wanted him to return to the action! I wanted the aged, wise, but still smartass sage leading them through the adventure! Perhaps he will do more in the film, but that trailer totally killed my Goldblum buzz. And there is nothing better than a good Goldblum buzz!

Lauren Huff: I have to agree with this; my reactions went something like this: “Yes! Jeff Goldblum!!!” “Wait, is that the only way they’re going to use him?” Obviously, it’s hard to say from just one trailer, and Goldblum may have more to do. But something tells me I am going to walk away from this film wishing they had utilized him more. I could sit through a whole movie of just Ian Malcolm. How about that for a spinoff, Hollywood?

Shanley: I’m not sure when it happened, but Goldblum seems to have become a caricature of himself in recent film roles and what fans seem to be forgetting is that Dr. Malcolm was an insanely gifted mathematician, a seasoned ass-kicker of dinosaurs and perhaps the single most qualified person to speak on this subject of anyone on the planet not named Dr. Grant. I think the best way to re-introduce his character, without revealing too much in a short trailer, is for him to be speaking to a committee. Save the juicy Malcolm-isms for the actual film. Just a little Goldlbum is enough to getcha into theaters! 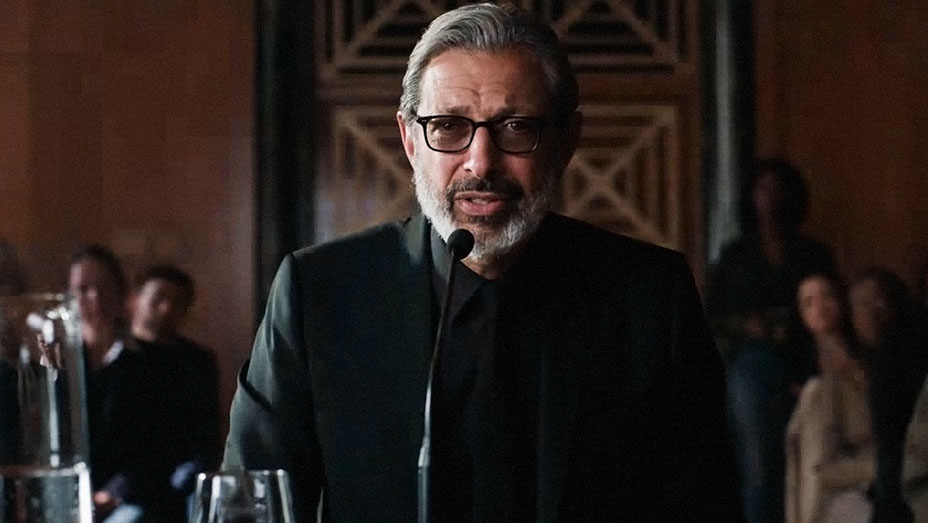 Lee: The worst kind of trailer is the one that makes you feel like you already saw the entire movie within those two minutes. This might seem like one of those, but I honestly believe that Bayona has much more in store, and this is just what’s palatable to show the viewer right now. And come June, we might all be singing a different tune.

Huff: It’s funny you say that, because my immediate thought after watching this trailer was, “Well, now I don’t have to see the movie.” I feel like the best things the movie has to offer — Jeff Goldblum returning, epic dino-on-dino action, Bryce Dallas Howard finally getting rid of her heels — can all be seen in the trailer. This is actually my gripe with the state of trailers in the industry now in general, but that’s a conversation for a different day.

Rahman: It’s the first trailer, so there’s plenty more to come, but the big pluses for me were obviously Goldblum’s Dr. Ian Malcolm making an appearance, the score and just re-entering a world where dinosaurs exist. The only major gripe I have is with Pratt’s clothing choices, no really, it’s bothering me. The leather vest top, and the matching leather arm guard with huge buckles? And don’t get me started on people who wear their watches with the dial facing inwards. Sort it out, Pratt.