The Justice League — Batman, Superman, Wonder Woman, Aquaman, the Flash, Green Lantern. They’re the greatest heroes DC Comics has to offer, but for the past several years, a key element has been MIA. Wednesday’s release of Justice League No. 1, the series relaunch by acclaimed writer Scott Snyder and superstar artist Jim Cheung, reinserts that missing piece. J’onn J’onzz, the Martian Manhunter, who was one of the founding members of the Justice League of America in The Brave and the Bold No. 28 (1960), has rejoined the team in a major way.

Despite the character’s long-standing history with the team, the Martian Manhunter has not been a member of the league proper for seven years. 2011’s New 52 relaunch saw his spot on the team taken by Cyborg (who thankfully still remains a key member in the relaunch), while the Martian was shuffled off to other series and his connection to the JL became one of strained awareness. His position in the DC Universe was made less crucial during this time, despite a short-lived solo series. While the Martian Manhunter enjoyed prominence on television thanks to the streaming availability of Cartoon Network’s Justice League animated series, and his live-action portrayal by David Harewood on The CW’s Supergirl, he faded from sight within comic books.

The character was reinstated in the DC’s current Rebirth era, which established a new continuity from the pieces of the old. Earlier this year, in Snyder’s event series Dark Knights: Metal, the Martian Manhunter returns, promising untold secrets and a new outlook on his place in DC’s multiverse. In Snyder’s hands, the Martian Manhunter is more interesting than ever and he’s the crucial ingredient to why Justice League is one of comic’s most successful relaunches.

Justice League No. 1 spins out of the pages of Justice League: No Justice, the miniseries co-written by Snyder, Joshua Williamson and James Tynion IV, which bridges the gap between Metal and the current Justice League series. In the aftermath of Metal and No Justice, the league has been forced to change its approach, not only in terms of the team lineup but also how the group fits in the broader universe. The Source Wall, which marked the end of the known universe has been broken open, unleashing the unknown into the charted DC Universe. The Justice League is tasked with exploring what it has unleashed, and it’s the Martian Manhunter who holds them together.

Snyder positions J’onn J’onzz as the heart of the series, the emotional anchor that connects the team. Oh, and then there’s the fact that he has him turn into a giant space dragon to destroy Earth’s compromised moon. As the Justice League’s newly elected chairman, the Martian best represents the team’s notions of justice. He reiterates this point to the team when he says, “If I am to be your chairman, perhaps my job must be not just to connect you to each other… but to remind you of who you are: the ones who inspire us to be better than we should be. Myself included.” Snyder gives him an emotional openness and vulnerability that has long been absent from one of the most powerful individuals in the DC Universe.

J’onn J’onzz, the last of his kind, has frequently been used as a straight man at best, and a void at worst. With catch-all powers that include telepathy, telekinesis, flight, invisibility, intangibility and shape-shifting, there has been a sense, in modern comics at least, that many writers don’t know what to do with the character. His power set, and weakness to fire, have proved to be a challenge in terms of what to do with him. As a result, he was often left to reside in the Justice League’s satellite base, the Watchtower, on monitor duty. While present, the Martian Manhunter was too often cast to the background in favor of more popular characters. This isn’t to say that the character hasn’t been used effectively — as he notably was in Grant Morrison’s JLA. But without a long-running solo series, a well-established rogues’ gallery, or a rich life and love story as his alter ego John Jones, the Martian Manhunter has mostly been characterized as a tragic figure with uncharted powers – a question mark hovering in the sky. 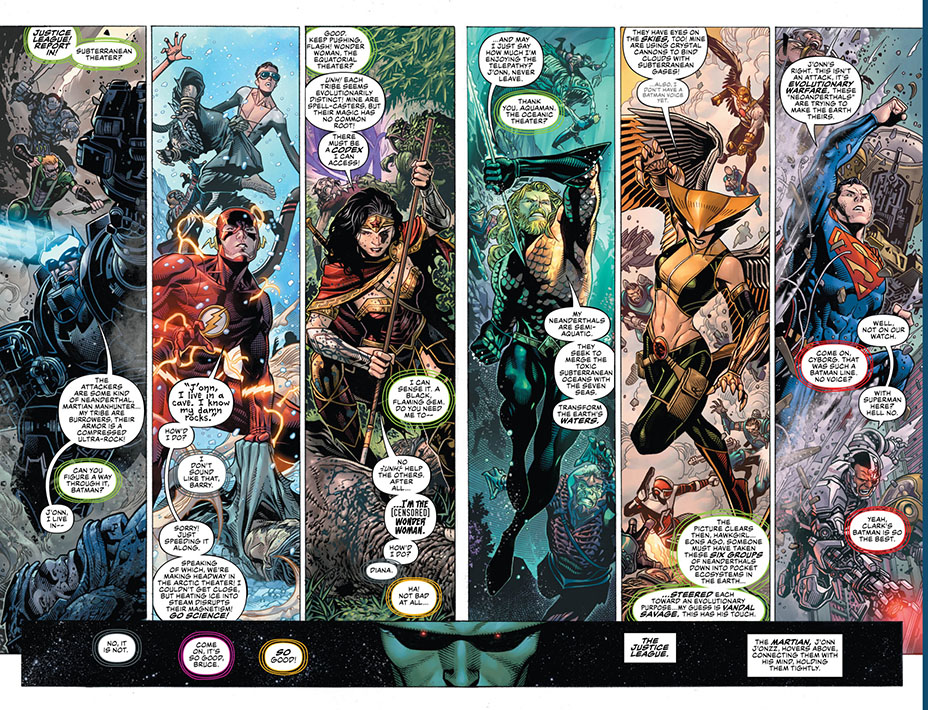 HIs status as an eternal question has now shifted as he’s the one who provides the team with answers through a better sense of themselves. The issue opens with the Justice League, split into pairs, facing off against the proto-human hordes of the immortal villain Vandal Savage. J’onzz connects the superhero team to each other telepathically, allowing them to give each other situation reports, while enabling them to converse and banter with each other across spatial divisions. Thus, each character, yes even Batman, becomes emotionally open through the Martian Manhunter. This makes for an engaging read as it not only shows off the league’s strategic skills, but their friendships as well — an angle sometimes lost in the ever-present sense of crisis.

Snyder has also introduced the Martian’s unique ability to create a psychic boardroom, a mental meeting place where the team can weigh in on decisions during a break in the action. It is here where J’onzz truly steps up, weighing the possibility and cost of whether or not to destroy an object, “the totality” that is hurtling from outside the barrier of the known universe into their world. Snyder places the weight of the universe, the multiverse, on the Martian Manhunter, and doesn’t promise he’ll always make the right decision, but the just one. Within this new series, justice is more than good versus evil. Justice is compromise; it’s cost; and it’s sometimes losing in an effort to become better. Finally, after all these years, J’onn J’onzz is at the center of the Justice League, forced to make the hard choices as his counterparts have done over the years. No longer a static character, he is set up to be just as varied and complex as his power set would suggest. Batman, Superman and Wonder Woman may be receiving all the attention as a result of their solo books, but the future of the DC Universe resides with the Martian Manhunter — a decision not only brave, but bold.

'Justice League': Behind the Comic Book Origins Of The Universe-Changing 'No Justice'

Eric Bana Says He Had No Interest in Reprising 'Hulk' Character