[This story contains spoilers for Justice League Dark No. 1]

Magic is taking a turn toward horror, and even DC’s greatest heroes are out of their depth. This is one of the central conceits of writer James Tynion IV and artist Alvaro Martinez Bueno’s Justice League Dark, the first issue of which hits comic shops and digital platforms Wednesday. Justice League Dark, created by Peter Milligan and born out of DC’s New 52 initiative in 2011, is a relatively new concept in the DC Universe. Comprised of a number of DC’s magic-based and horror characters, Justice League Dark tackles issues of the DC Universe outside of the purview of the traditional Justice League.

The original series ended in 2015, but Tynion IV, who previously tackled the Bat-Family in Detective Comics, relaunches the series in the midst of a reinvention of Justice League’s publication line. The previously discussed Justice League from Scott Snyder, which sees Martian Manhunter lead the team against the Legion of Doom, is the central book in DC’s Justice League line. But that series’ newly minted Hall of Justice acts as the headquarters for several other teams including Justice League Dark, and the members of the upcoming Justice League Odyssey, allowing the heroes to tackle the dangers of the universe on a more holistic level.

One of a number of series relaunches to debut this summer from DC Comics, Justice League Dark is one of the strongest new arrivals, with a clear hook that confidently secures its place of distinction among DC’s line. The team, led by Wonder Woman and comprised of cult-favorite characters such as Zatanna, Detective Chimp, Man-Bat and Swamp Thing, investigates the corruption of magic when its owners, entities from beyond the cosmos, come looking to collect. Justice League Dark sees Tynion IV and Martinez Bueno re-team after their Zatanna centric arc in Detective Comics. Just as he infused each member of the Bat-Family with distinct personalities and personal struggles, Tynion IV is doing the same for each member of Justice League Dark, stripping them of some of the mystique and mythical status attached to their names. While his voice is distinctly modern and inclusive, there’s an element of Stan Lee and Jack Kirby’s Fantastic Four in his style, one that manages to make casual conversations just as interesting as action scenes, while simultaneously introducing new concepts on an almost issue-by-issue basis. With Martinez Bueno’s widescreen artwork, which emphasizes body language and the depth of shadows, Justice League Dark is an immediately investing work that seems primed to launch these characters to greater heights. 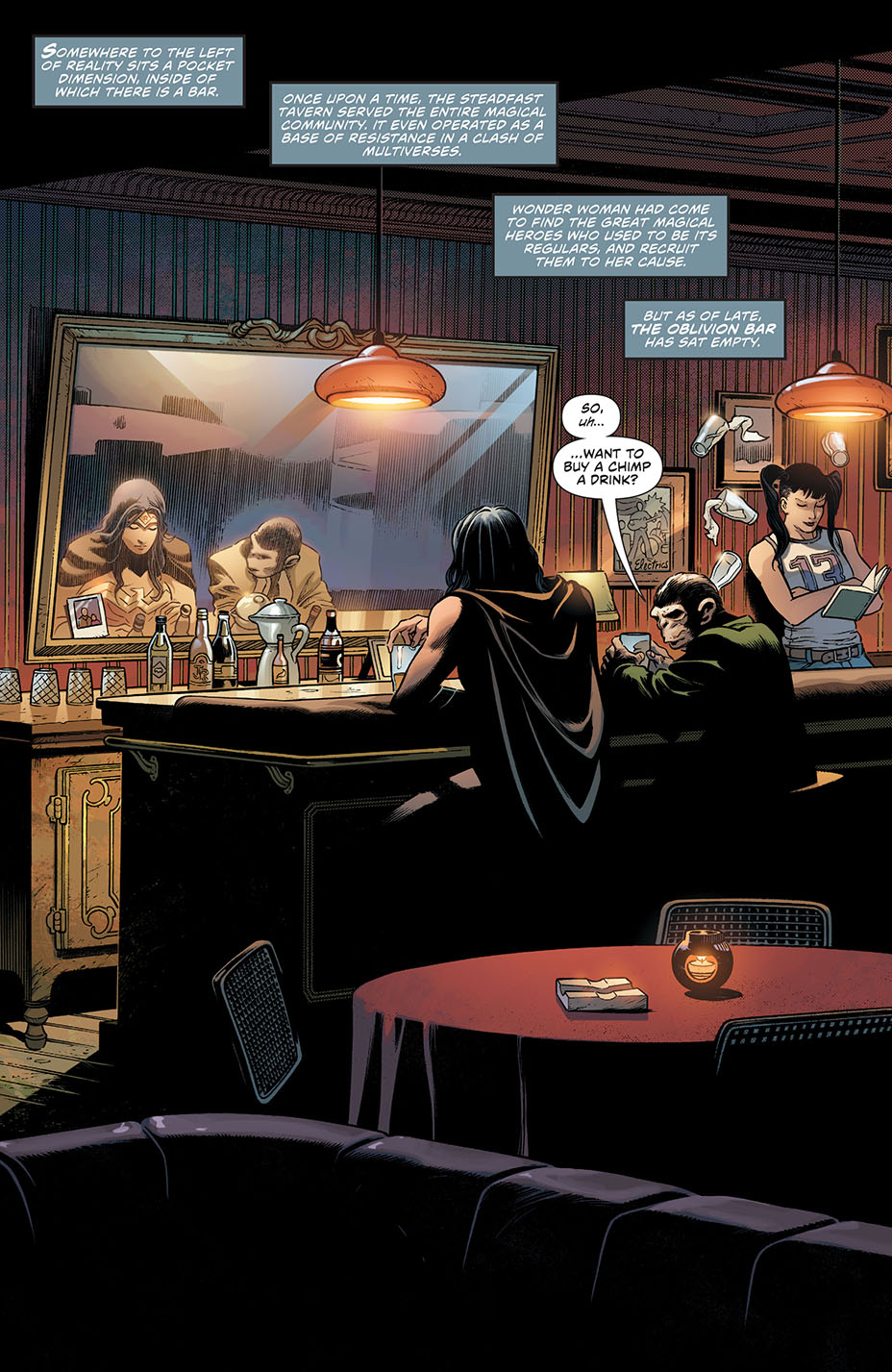 A number of DC’s magic and horror-based characters featured in Justice League Dark rose to prominence in the pages of Vertigo, a mature publication side of DC Comics that notably hosted the talents of Alan Moore, Jamie Delano and Neil Gaiman in the pages of Swamp Thing, Hellblazer and The Sandman. Justice League Dark pulls as much from Vertigo’s classic library as it does from DC’s modern superhero books, erasing the divide between the characters and tonal distinctions, making it seem perfectly natural to see Wonder Woman share a panel with Detective Chimp and Traci 13, while Constantine talks to Zatanna mere pages away. While Justice League Dark is rewarding for those familiar with these characters, with events from Alan Moore’s Swamp Thing referenced and recreated, the book makes good on one of the greatest thrills of reading comics: creating an invitation for newcomers to search through the back-catalogue of stories that defined these characters and made them who they are in these pages.

Perhaps the greatest success of this first issue is that it shows why characters many might not be familiar with, or who haven’t had their own series in quite a while, potentially may be able to rise to an A-list status alongside Wonder Woman. While DC Comics is largely dominated by the familiar faces of top-selling heroes, Justice League Dark is a breath of fresh air that reminds us why we fell in love with comics in the first place — not to simply grow comfortable with the characters and concepts we know, but to be taken on a journey to discover the ones we don’t.

DC’s cinematic universe seems to be rising to a similar cause, stepping away from Batman and Superman movies for the moment and focusing on Aquaman, Shazam! and Wonder Woman. All three of those properties share the common factor of magic, a universe that DC has shown an inclination to enter for some time, and touched on slightly in Suicide Squad (2016). With the relaunch of Justice League Dark, the growing popularity of Wonder Woman, and cinematic interest in breaking away from tropes and pushing superhero movies into other genres, there seems like no better time for Warner Bros. to finally move ahead with a cinematic adaptation of the horror-fantasy team. 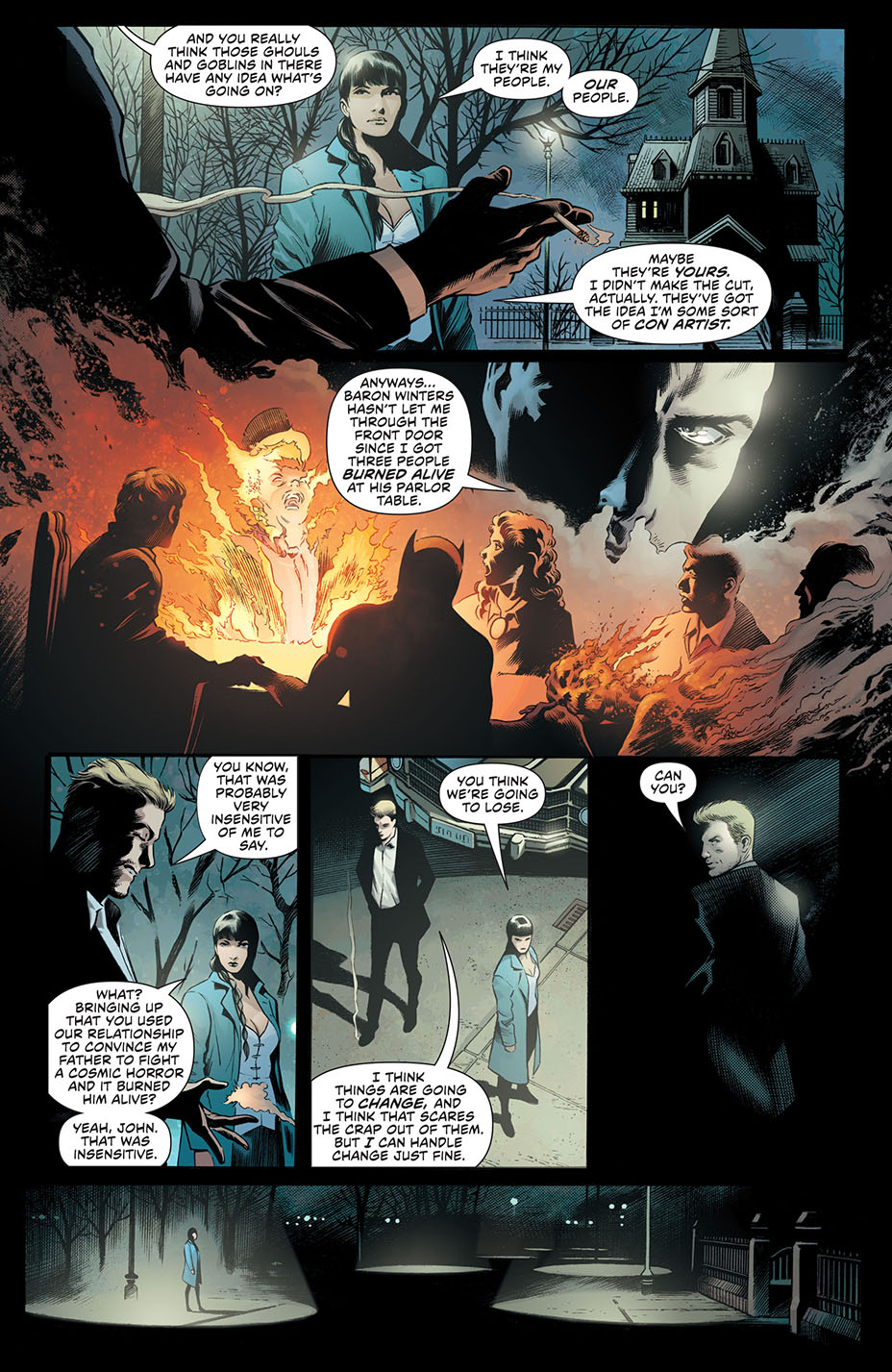 A film based on Justice League Dark has been caught up in the early stages of development for a few years now. Shortly after Justice League Dark’s comic book debut in 2011, rumors circulated that Guillermo del Toro was working on a similarly themed project entitled Heaven Sent, which would feature Deadman, Zatanna, Swamp Thing, Spectre, Constantine, Madame Xandu and Zatara. Del Toro confirmed his work on the project in 2013 and was said to begin production after he completed Crimson Peak (2015). With the script completed in 2014, it seemed the film was a go. But Del Toro dropped out of the project in 2015, and the film, retitled Dark Universe, was picked up by Doug Liman in 2016. Liman left the project in May 2017, and the last we’ve heard of Justice League Dark was during Warner Bros. 2017 San Diego Comic-Con panel where the title was shown along with other upcoming DC films. But with the recent developments of Warner Bros. restructuring, it’s time to bring Justice League Dark back into the light.

While Del Toro returning to the project would, of course, be a best-case scenario, the busy director has so many projects lined up that chances of him entering the DC Universe anytime soon seem slim. What might be most effective in terms of bringing the property to life would be if Warner Bros. capitalized on the new series, and used Wonder Woman’s popularity to get the project moving. Although Justice League, as a film brand, is a loaded entity following the disappointment of last year’s film, the concept of heroes teaming up seems too good to pass up.

While the depiction of other members of the Justice League has been debated ad nauseam, Wonder Woman has been wholly embraced. Audiences certainly wouldn’t turn their noses up at seeing more of Gal Gadot as the Amazon warrior, and her leading a team of some of DC’s lesser known mystical characters seems like a perfect match. There are plenty of DC’s defining past works to pull from, but like Aquaman and Shazam! are doing, hopefully successfully, recent comics may hold the best answers for film adaptations. Tynion IV and Martinez Bueno’s Justice League Dark is the perfect evolution of a concept, one that seems geared toward cinema and enticing to fans both new and old.