Those leaving Justice League and wondering what Steppenwolf actually wanted, what the deal was with the Mother Boxes, and what about that weird teleportation tube — it’s OK. While the movie was less than forthcoming about the backstory of the villain beyond, “He’s a bad guy and he’s doing bad stuff,” there’s a lot more information to be found in DC’s comic book mythology, and it can help you understand some of the ambiguous stuff in the movie.

Steppenwolf first appeared in 1972’s New Gods No. 7, a creation of legendary artist Jack Kirby. It wasn’t necessarily the most auspicious of debuts, in that he dies in the very same issue. Nevertheless, before his death (at the hands of Highfather, whose wife Steppenwolf murdered earlier in the story), he comes across as a bloodthirsty, violent leader of the military forces of the planet called Apokolips, given to declaring things like, “He’s my kill!! I’ll hang his skull in my trophy hall!” in the midst of battle, which just so happens to be his favorite place to be.

Most importantly for the purposes of Kirby’s Fourth World — the overall title given to the majority of the creator’s 1970s output for DC, which includes the New Gods, Forever People and Mister Miracle series — Steppenwolf is the uncle to Darkseid, the fascistic arch villain of the entire comic book mythology. This would turn out to be important when, after his death, Darkseid would prove to be surprisingly sentimental and resurrect Steppenwolf as a more loyal, although no less fierce, commander of his army and central figure in his ruling elite. It’s in this role that Steppenwolf would lead invasion forces in Darkseid’s name, cementing his nephew’s power base and searching for the “Anti-Life Equation” that’s central to Darkseid’s ambitions. 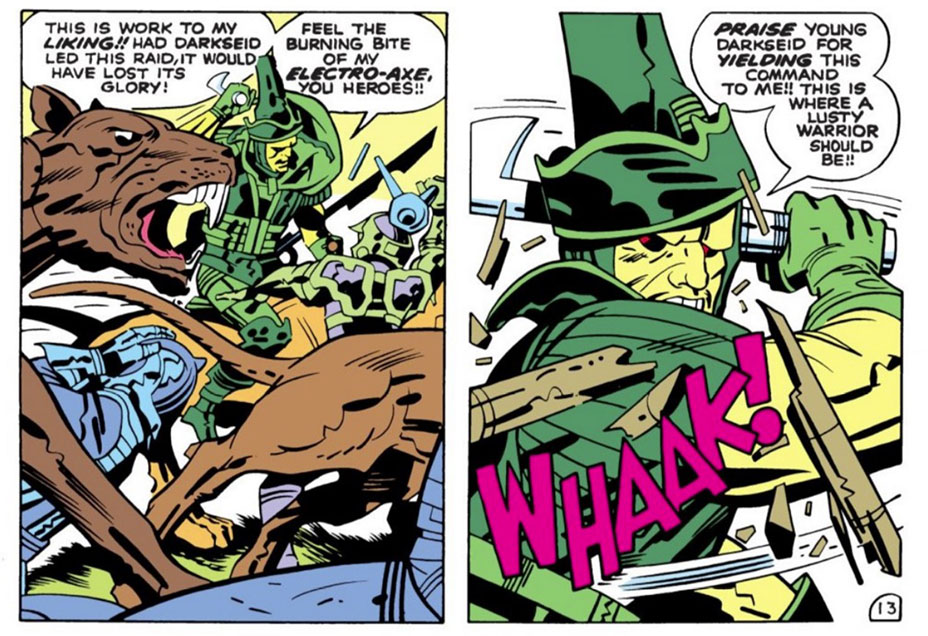 The Anti-Life Equation, to all intents and purposes, is a Macguffin that Kirby rarely explained any details of, but essentially it was something that would allow anyone who possessed it to eradicate all free will in the universe. It’s worth noting that, while the planet Apokolips itself goes unnamed in Justice League the movie — although Steppenwolf’s home world is described as “apocalyptic” in passing — Darkseid is mentioned by Steppenwolf himself at one point, suggesting that he is, indeed, out there somewhere.

In Warner Bros.’ DC movies, Darkseid has been hinted at as the “big bad” — someone akin to the Marvel Cinematic Universe’s Thanos. Though in Justice League, Darkseid was only briefly mentioned, and it’s unclear if Warners still plans on introducing him in a future movie. Justice League‘s use of Parademons would suggest that there’s an eventual Darkseid reveal in the franchise’s future, or at least the possibility thereof; Parademons, according to comic book mythology, are Darkseid’s troops, although they’re far more straightforward in their origins than the “regular people, twisted by Steppenwolf” explanation given in the movie.

Like both Steppenwolf and the Parademons, the Mother Boxes are part of the Fourth World comic book mythology, although the comic versions are utterly unlike their cinematic counterparts in anything but name. Rather than being a third of a destructive machine that could turn Earth into a hellscape, the original conception of a Mother Box was a living computer favored by the New Gods — in other words, the good guys — that could nurture and heal its users, communicating through a series of pings that are somehow understood by whoever it’s talking to at the time. Described, at times, as both mystical and technological, the Mother Boxes of the comics are essentially magical mystery boxes that allowed heroes and writers alike to skip over problematic elements and keep the story moving. 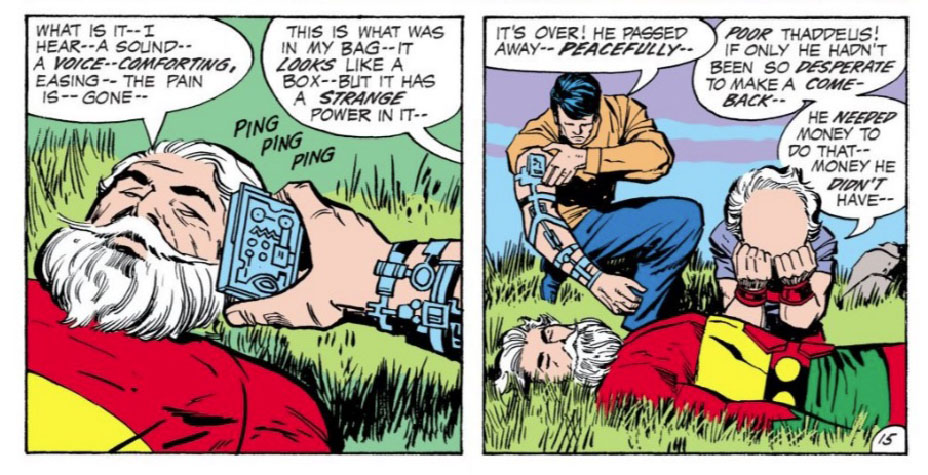 The Mother Boxes of the movie are closer to the comic book mythology’s Father Boxes, the bad guys’ version of a Mother Box. If this seems to be stretching the naming convention a little bit too far, be aware that Granny Boxes and Orphan Boxes have also shown up throughout the decades of comic series touching on the worlds Kirby created for DC.

The final piece of Justice League‘s inspiration from Jack Kirby’s work relates to Steppenwolf’s preferred mode of transport in the movie. Although it’s never named, the villain is unmistakably using Boom Tubes — a teleportation method from the comic books that’s so named for the sound it makes when it disappears, allowing travel between two locations via a glowing tunnel of some sort. The science behind it has never been fully explained, and indeed, could be best described by a cover blurb appearing on 1971’s Superman’s Pal, Jimmy Olsen No. 171: “Kirby says: ‘Don’t ask! Just buy it!'”

All told, Justice League pulls heavily from the Fourth World of DC’s comic book lore, while oddly not referring to it directly. Perhaps doing so would have made the movie feel overstuffed with new concepts, or maybe even silly — are movie audiences ready to hear the words “Boom Tube” spoken with a straight face? — but whatever the reason, it’s a loss that can make the threat at the heart of the feature feel empty and ill-considered. The truth is somewhat different, but it’s difficult to make that case without reading Kirby’s work first. Perhaps DC should have released its planned Fourth World Omnibus a few weeks earlier.