“The Kaiju Score is a Quentin Tarantino film taking place in some corner of a Godzilla movie,” writer James Patrick said in a statement about the fall title. “You have this giant canvas of a kaiju attack occurring, and as it happens there’s this more personal story going on. And after that setup, it explores how these four characters, who are in just the worst situation in their lives, believe the only way out is to do this impossible thing. This crazy crime. It’s about that desperation.”

Beyond the obvious inspiration of old kaiju movies, the roots of this book lie in an unexpected source.

“It started with Donald Westlake books like the Parker series. I wanted to do something contemporary like those,” Patrick explained. “But when Rem [Broo, co-creator and artist] came aboard, I knew it felt more Oceans 11 and I adjusted. And Elmore Leonard stories when it came to the characters, and Tarantino when it came to the dialogue. I didn’t say ‘I’m going to write this dialogue like Tarantino and ape him’ — I just mean that in a more organic sense [of] I love all of those people and their work, and my own work probably echoes them.”

Visually, the series also draws from crime fiction — and some of Broo’s own earlier work.

“James told me from the beginning that what made him take me into consideration as the artist for this project was a specific splash page from a former comic of mine, Terminal Protocol,” the artist said. “The image was of a character with a cool attitude drawn with extreme perspective angles. Connecting that image with the heist theme, I knew exactly in what direction I should go with the art style. But I wanted to highlight the heist theme in the story, so I decided to go with a clean, limited color palette, and a vintage illustrated poster-like style for the retrospective or descriptive pages of the comic, a style that can be seen in the cover art as well.”

The Kaiju Score will debut Nov. 25. Look below for an exclusive preview of Broo’s artwork for the first issue. 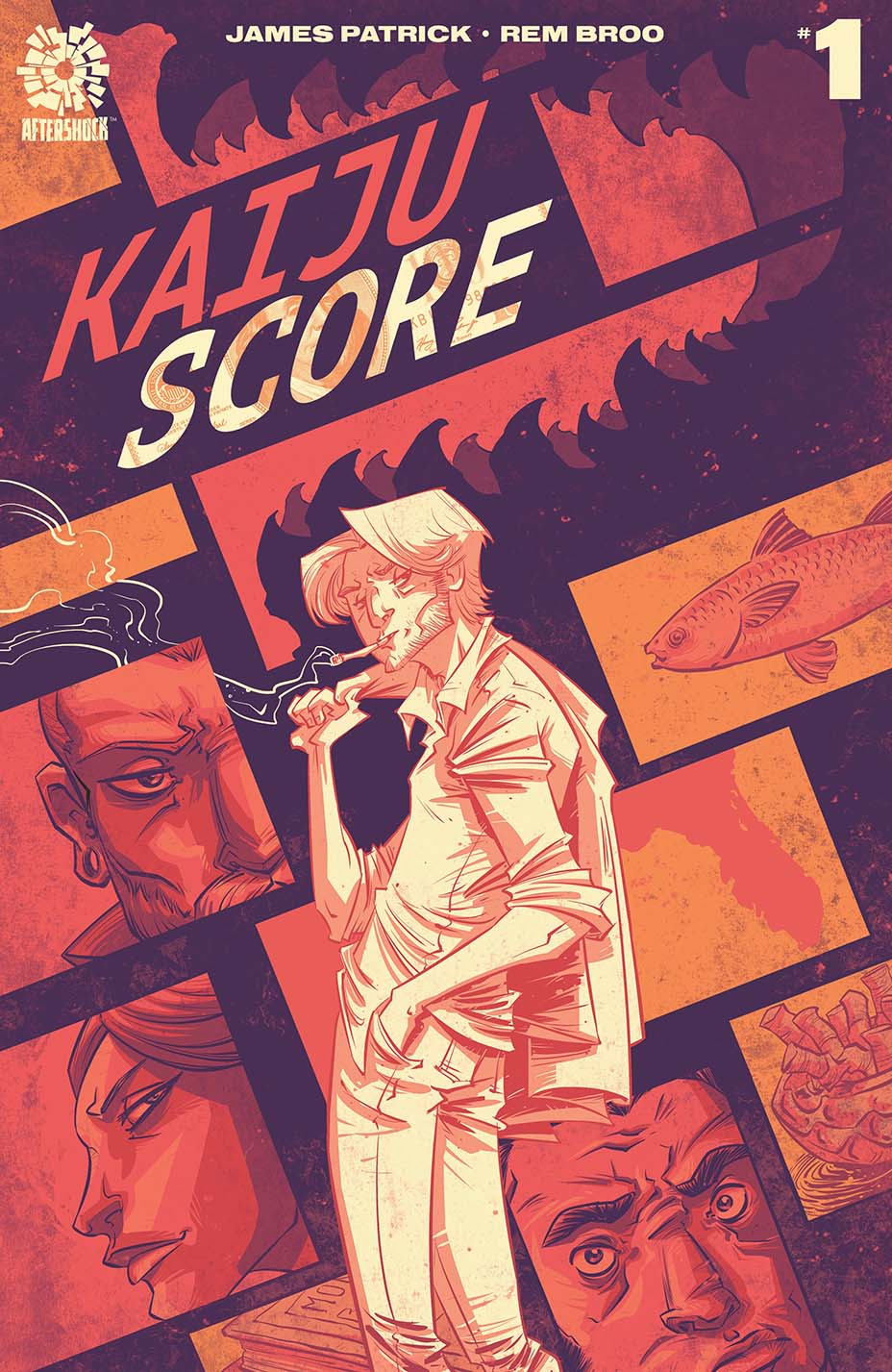 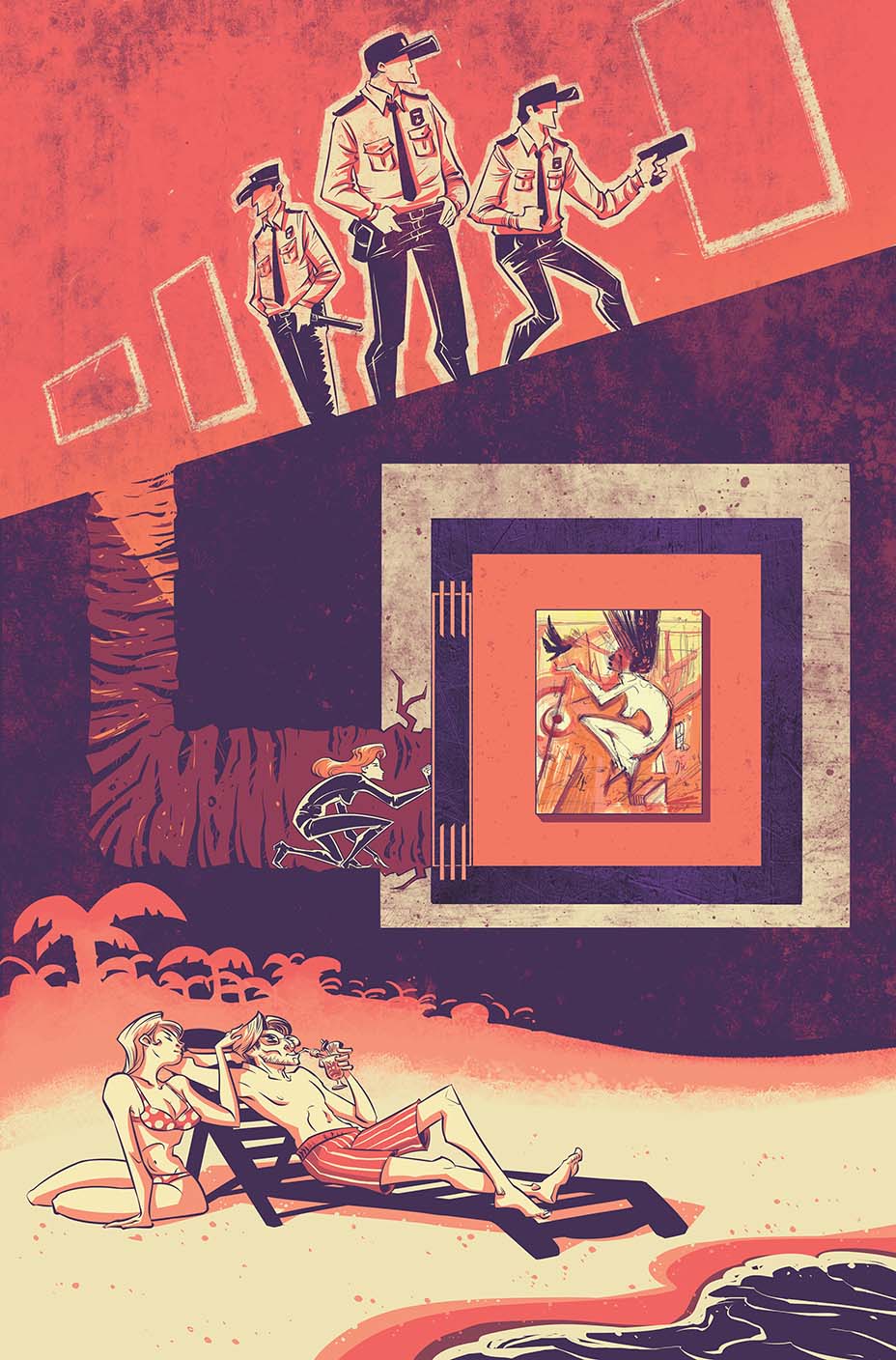 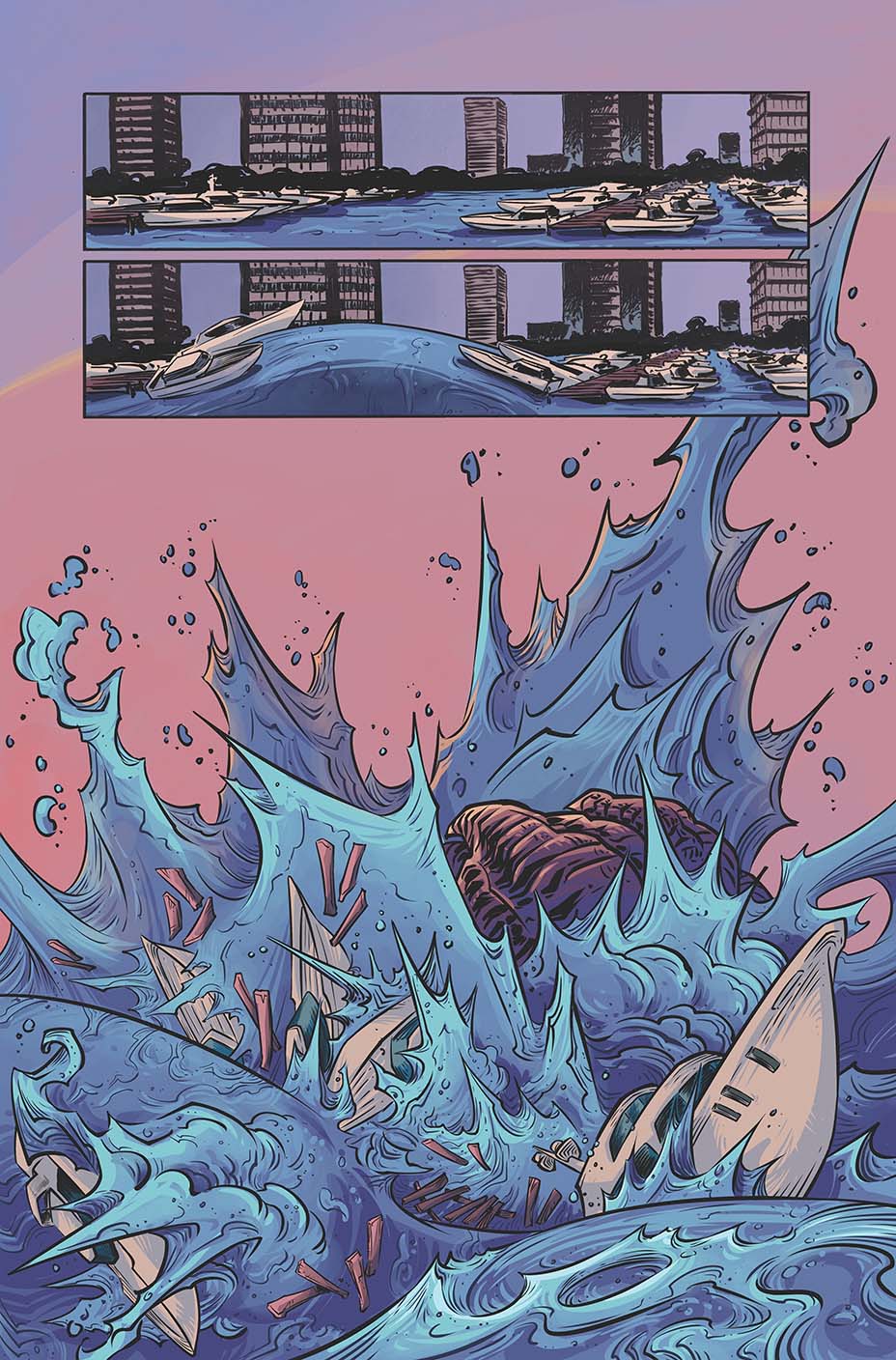 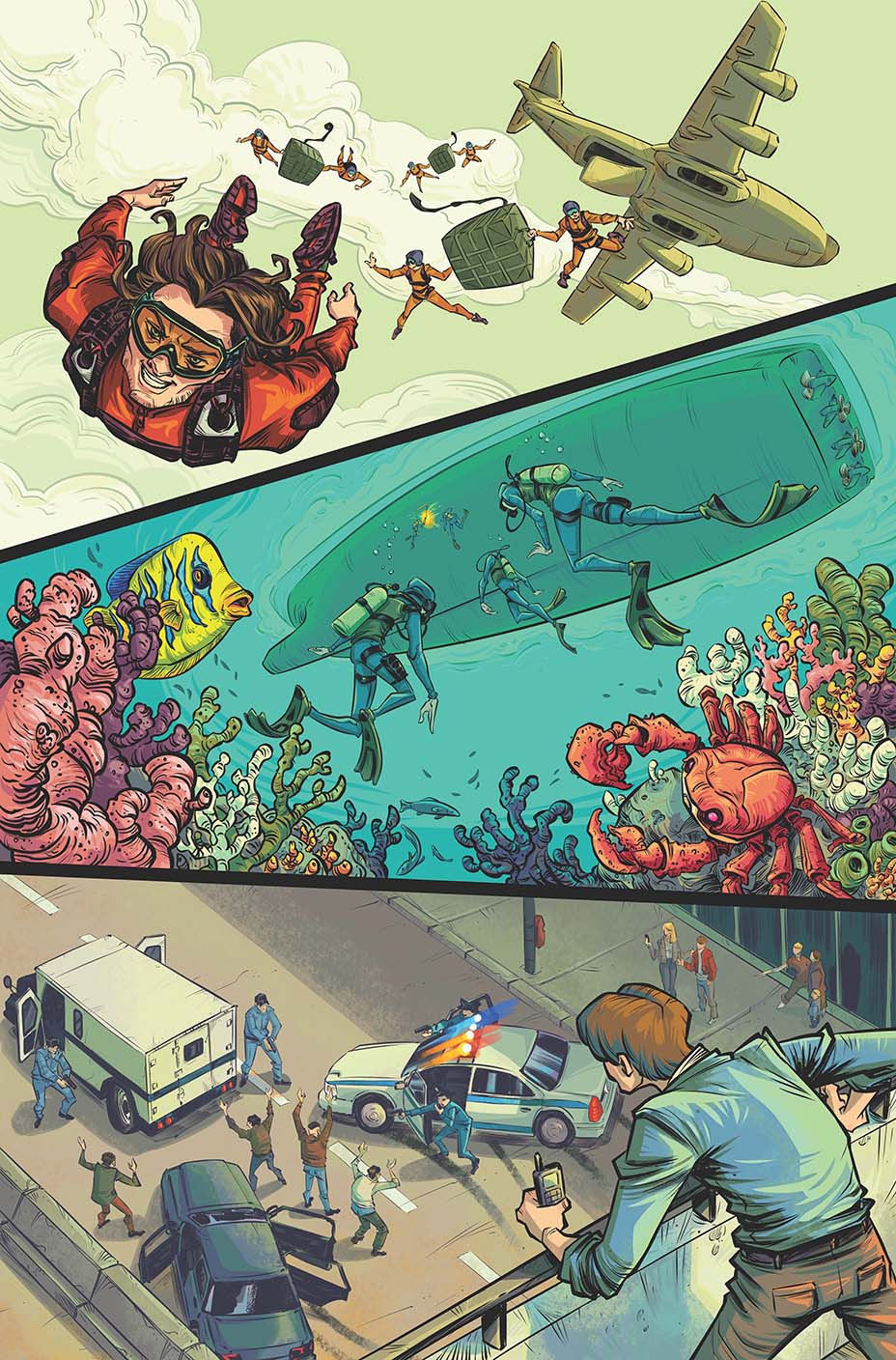 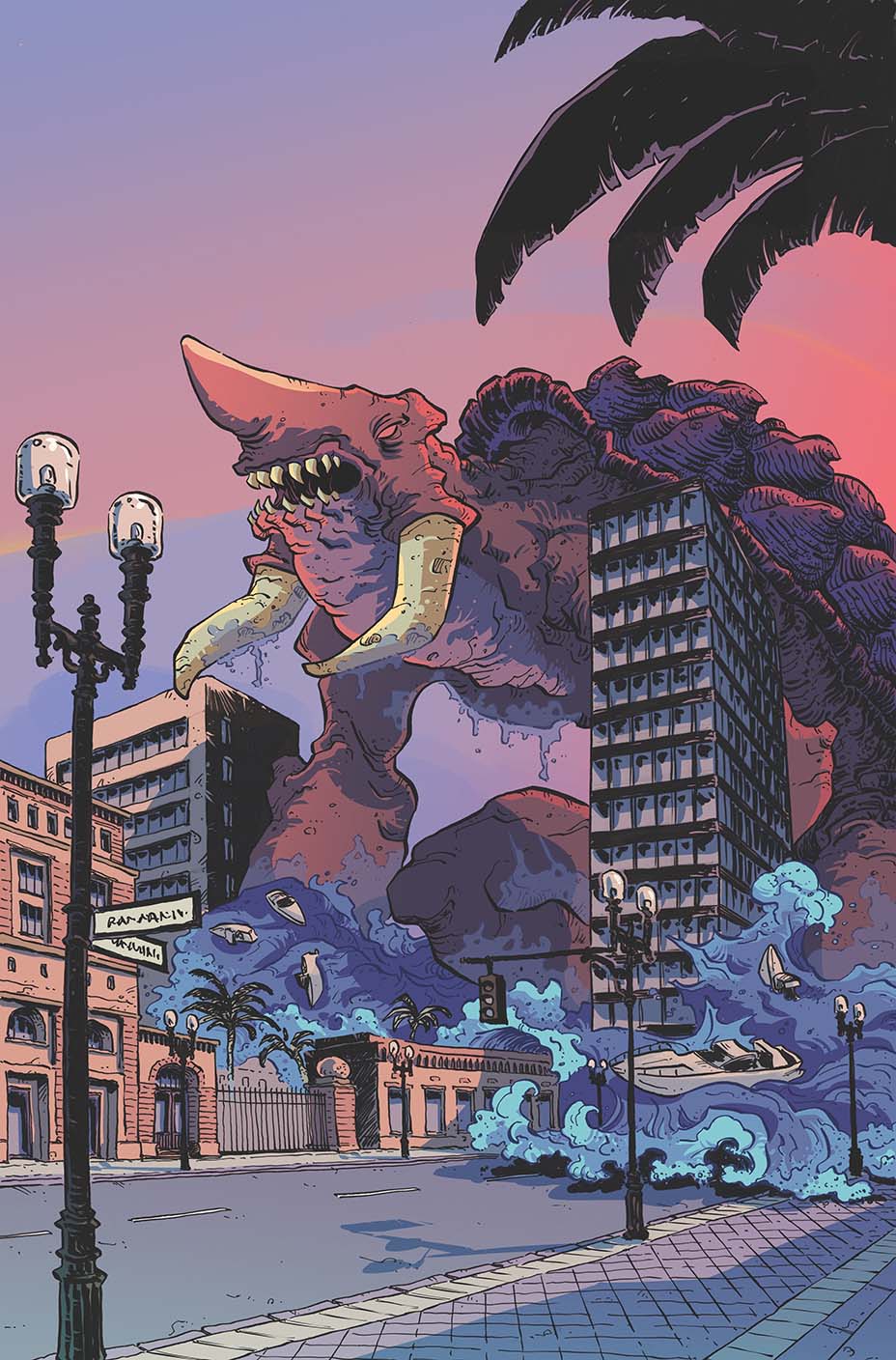 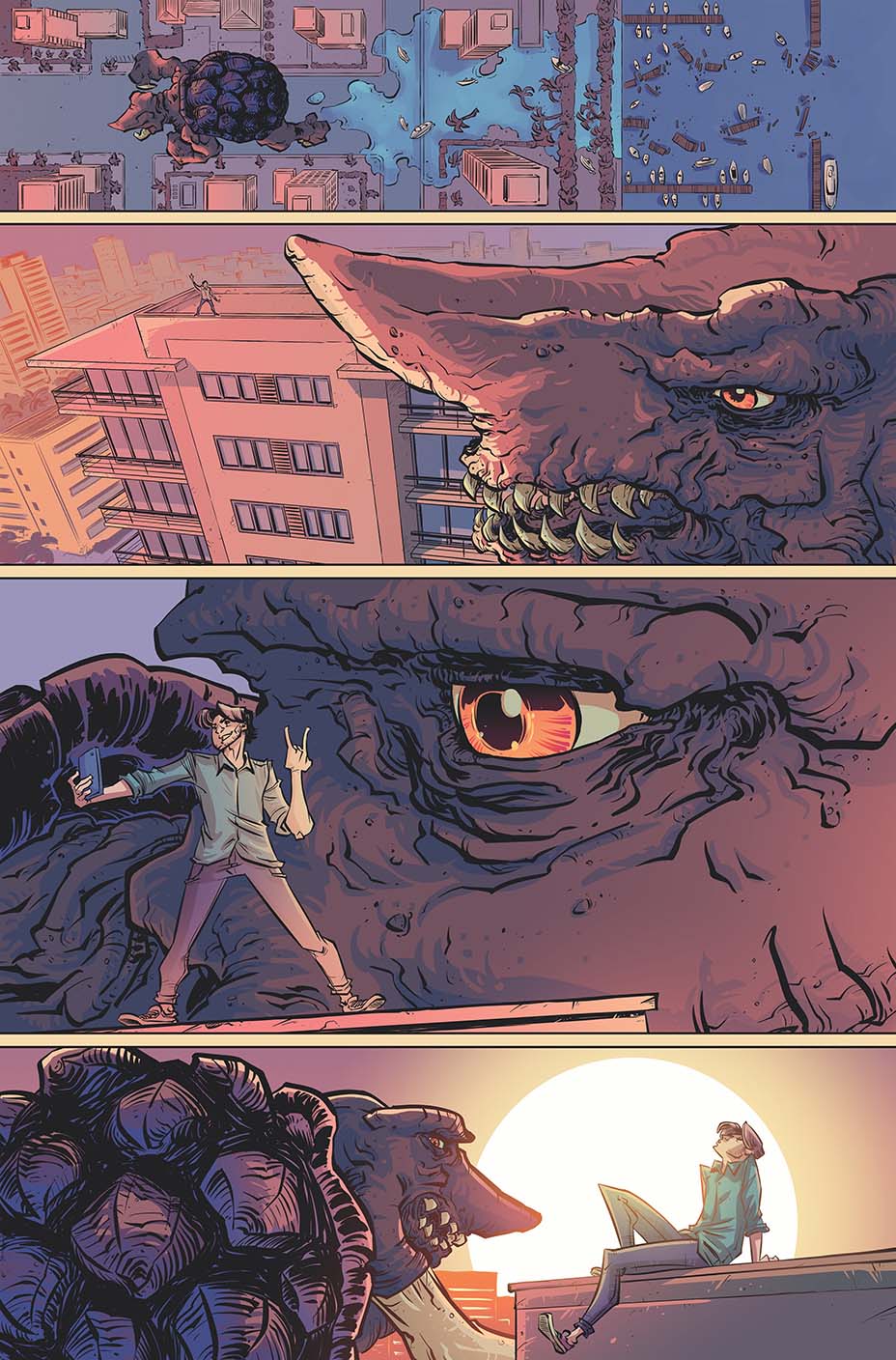