Katherine Langford has yet to miss in her young career.

The Australian actor already has a mighty impressive resume that includes two hit Netflix series, 13 Reasons Why and Cursed, as well as two esteemed films in Knives Out and Love, Simon. In her latest return to the screen, Langford stars in Brian Duffield’s Spontaneous, a high-concept sci-fi comedy that is currently registering a 97% score among Rotten Tomatoes critics.

Spontaneous focuses on Langford’s Mara and her budding relationship with Charlie Plummer’s Dylan. The catch is that their love story begins amid a rising pandemic involving spontaneously exploding teenagers at their high school. Even though the film was shot in early 2018, the film has direct parallels to the novel coronavirus pandemic, something none of the creatives could have seen coming.

'Werewolf by Night' Director Michael Giacchino Thought the Marvel Special Would be Rated TV-MA, Not TV-14

“In terms of the relevancy, no one could’ve imagined how this would hit when we made it three years ago,” Langford tells The Hollywood Reporter. “The thing about this, again, is that it’s satirical comedy with really beautiful, grounded moments in it, and it definitely has that ‘becoming an adult’ learning curve. But the world is a very different place now in terms of the film’s relevancy, and no one expected how close to home it would hit.”

If one was pressed to name a single setback for Langford, it would be her deleted scene in Avengers: Endgame, the highest-grossing film of all time, but thanks to the advent of Disney+, as well as home entertainment, the scene has still been viewed by millions of Marvel fans. In the way station-set scene, Langford plays a grown-up Morgan Stark who reunites with Robert Downey Jr.’s Tony Stark following his ultimate sacrifice, and Morgan reassures her father that he made the right choice. To prepare for the scene, Langford reveals that she and Downey Jr. watched dailies of his Endgame scenes with Lexi Rabe, the young actor who played 5-year-old Morgan Stark.

“Maybe the day before or on set, RDJ [Robert Downey Jr.] had a couple of dailies and we watched a few just for context. But, yeah, it was really cool to just be on that set and see a little bit of what had been filmed before the rest of the world saw it.”

In a recent conversation with THR, Langford also discusses her streak of successful projects and the “Carrie-esque” moment she had while shooting Spontaneous.

Spontaneous is already getting great reviews. You also have two hit Netflix series under your belt, 13 Reasons Why and Cursed, as well as two beloved films in Knives Out and Love, Simon. Have you been able to wrap your head around this amazing run that you’re on?

Firstly, thank you. That’s very kind of you to say. I feel just very lucky to have been a part of the projects I’ve been in so far, and I had an amazing first opportunity. I’m always so grateful to have been able to showcase and have an opportunity to do good work that I’m proud of. And to be able to work with other fabulous people, it’s just a very surreal feeling and something that I’m always grateful for. I’m still very young, and I have a lot to learn and a lot more to do. So I just look forward to being able to continue to learn from good people. 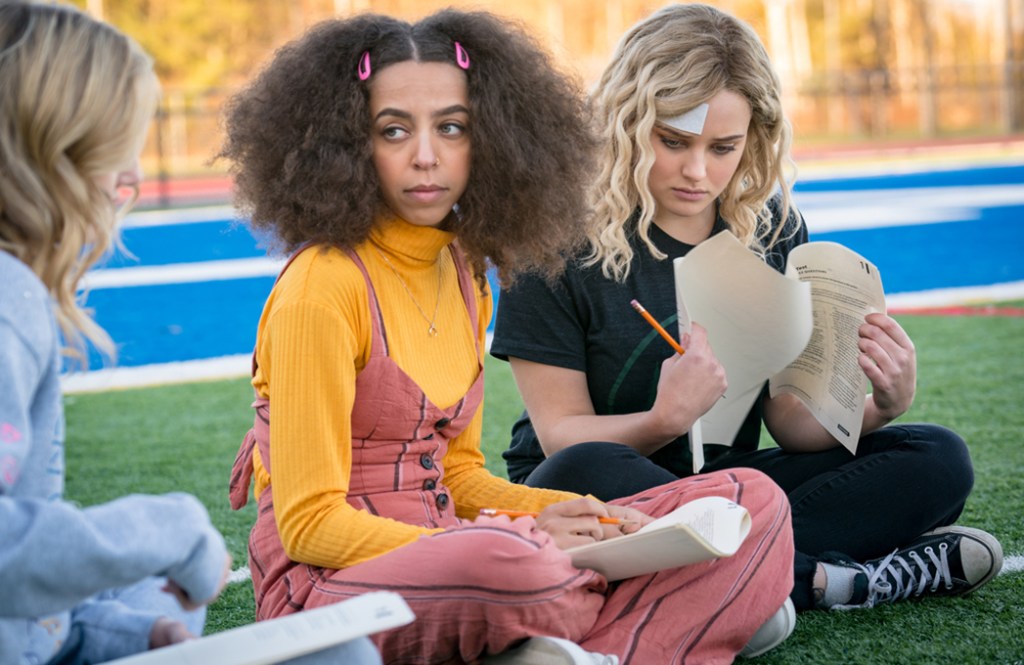 So I’m curious about the circumstances in which you were first told the premise of Spontaneous. What was your initial reaction to hearing or reading that the student sitting in front of your character, Mara, would spontaneously combust within the opening seconds of the movie?

(Laughs.) Well, I wasn’t expecting it. That’s the first thing that jumps to mind. The second thing, we filmed this almost three years ago, and when I first read it, the world was a very different place to what it is now, particularly this moment that we’re all living in. To me, it had this existential flavor, like premature existentialism, but also incredible satire. And I thought that this felt like something that was so unique but also had some really heartfelt and genuine moments. But for the most part, it was just satirical comedy, only now it hits a lot closer to home. Hopefully, some of those moments are still there, and I think it still ends on a feeling of hope. 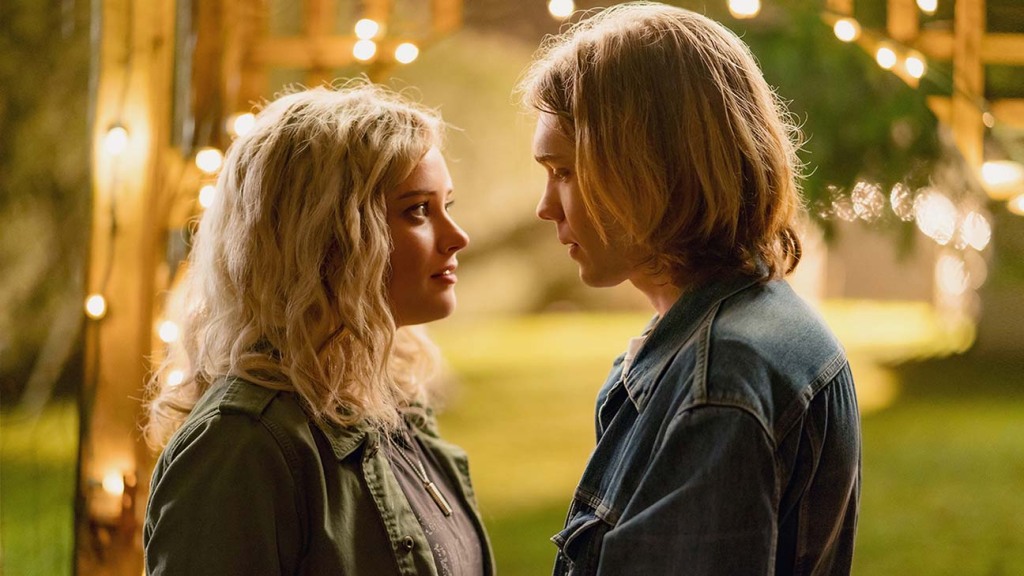 This movie has a bunch of match cuts where Mara will be doing something in one scene and that motion will carry over into a different location. Were those moments scripted?

Yeah, everything we did was scripted, but Brian Duffield really let us play in the more dialogue-heavy scenes between characters and their relationships. There’s actually a really beautiful scene between Mara and Tess (Hayley Law) which is almost completely improvised, and that’s just the two of us playing. As for everything else, this is through and through Brian Duffield. He wrote it, he directed it and for the most part, he was able to execute his vision for how he wanted to see it.

Despite the high concept of exploding teenagers, the film still feels rather grounded as it deals with some heavy subject matters and themes. While I’d understand why some actors would be tempted to heighten their performance to match the high concept, did Brian ever make the point that the high concept shouldn’t change how you’d normally approach dramatic or comedic material?

I don’t know if he specifically pointed it out. Maybe he didn’t have to — at least from my perspective when I was reading it and when we rehearsed it. I’m going to keep saying all the good things about Brian Duffield because he really is such an incredible writer and director, and the way that he wrote this, you do get those moments of satire and heightened worry that is somewhat caricature-ish. It’s also balanced really beautifully with sentimental moments and moments that needed to be more grounded in reality. I think that just came down to the writing and the script he wrote which does have that balance in there innately. I would also credit the actors and the dynamics and relationships between actors. That’s something that I’m really proud of, and I’m so grateful to casting. Mara is quite restless and energetic; she’s sort of like a little firefly in a jar. The dynamics between both Mara and Dylan (Charlie Plummer) balance it out really beautifully, and it also works as a three when Tess, Dylan and Mara are together. So, it was more of a balance, and Brian didn’t need to calm it down because it was present in the work.

For reasons that can be surmised, I have a feeling that a popular meme could emerge from that moment. I know you don’t purposefully make “meme-able” moments, but did the thought enter the back of your mind at the very least?

In terms of the relevancy, no one could’ve imagined how this would hit when we made it three years ago. The thing about this, again, is that it’s satirical comedy with really beautiful, grounded moments in it, and it definitely has that “becoming an adult” learning curve. But the world is a very different place now in terms of the film’s relevancy, and no one expected how close to home it would hit. 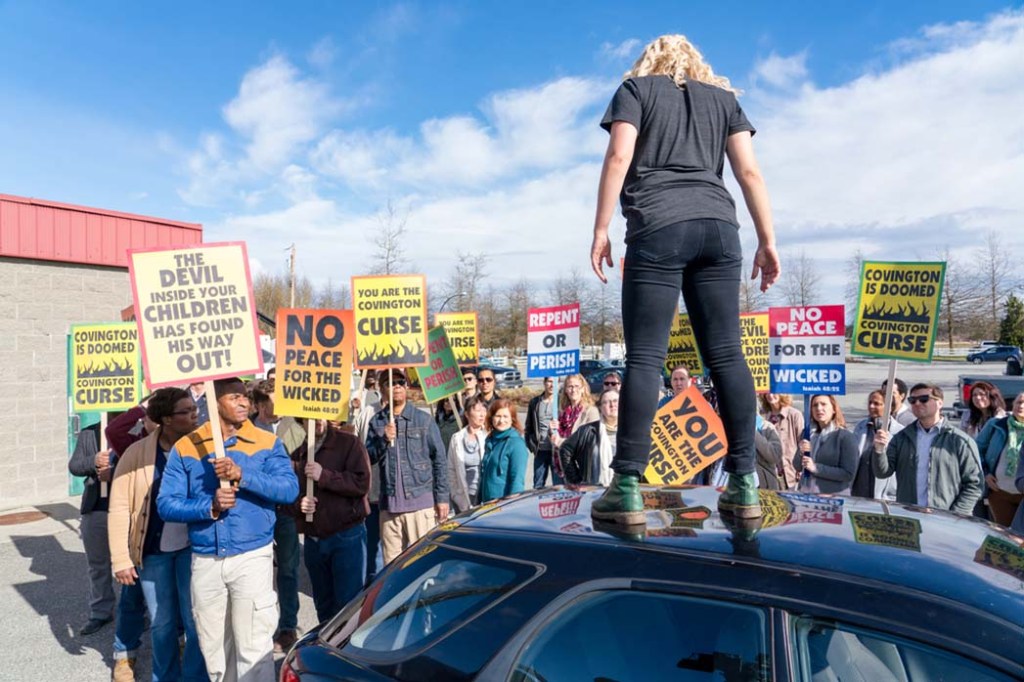 How many takes did you need to break the rear windshield of that car with a bottle?

You know what? I’m a pretty good thrower. I think I have a pretty good arm on me, so I don’t think it was that many takes. I think we only had three bottles that would break as well. All of those liquor bottles were made out of sugar glass, and one of them broke. So I think it was only two takes, but it’s one of my favorite lighter moments in the film.

And what did they use for the bloody goo? Is it still corn syrup and something else?

Yeah, it’s a delightful mixture of corn syrup, food dye and something else. I have to give props to our prop department because they created different kinds and consistencies of blood syrup. Part of that came down to Brian too since we use explosions in a number of ways in this film. I think there was a lot of research into how things spray, and they had to go through different tests whether it was sprayed, cannoned or whatever. So they had an array of bloods, and there’s one scene where it just came from a bucket. I don’t think I was supposed to, but I did cop probably an entire bucket of blood in a very Carrie-esque moment. So let’s just say it was a very messy cleanup and a very messy shoot.

Out of curiosity, did you watch dailies of Lexi Rabe, the young actor who played 5-year-old Morgan Stark, as you prepared your grown-up version of the character in Avengers: Endgame?

Wow, that’s taking me back a little bit, but maybe the day before or on set, RDJ [Robert Downey Jr.] had a couple of dailies and we watched a few just for context. But, yeah, it was really cool to just be on that set and see a little bit of what had been filmed before the rest of the world saw it. 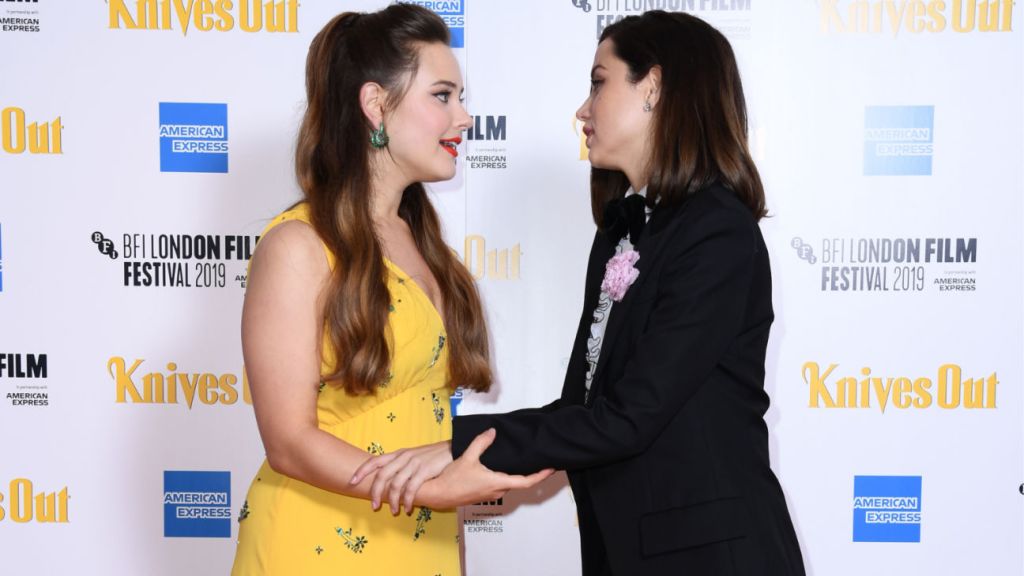 I’m pretty much out of time, but I love the phone call scene between you and Ana de Armas in Knives Out. She and I talked about the call and how valuable it was to have you present, out of frame, during her side of the call. She also did the same for your side, and you can just tell that such generosity between actors led to an even better scene.

Oh, that makes me so happy to hear. I had so much fun working on that. Ana, Jamie Lee Curtis, Chris Evans, Daniel Craig — they were all incredible. It was a really special film to be on, as was this one.

***
Spontaneous is now available on demand and digital.