Marvel Studios boss Kevin Feige counts himself fortunate to have spent years working with Stan Lee, the comic book writer who became world famous thanks to cameos in films based on Marvel creations.

But Feige regrets never meeting Jack Kirby, the legendary artist whose work included Captain America, X-Men, the Hulk, Fantastic Four and many more. Eternals is Kirby’s latest creation to come to the big screen, with filmmaker Chloé Zhao adapting the cosmic tale the writer-artist introduced in the 1970s.

“The whole movie is a love letter to what one man was able to do with a pencil, sitting at a little desk on the East Coast,” Feige told The Hollywood Reporter at the Eternals premiere in Hollywood Monday.

The legacy of Kirby, who died in 1994, was top of mind at the Eternals premiere, where Deadpool creator Rob Liefeld walked the red carpet with the copy of Eternals No. 1 he bought at his local store as a kid.

“The other day I was like, ‘How cool that I live in the timeline where William Shatner went to space in real life? One of the bummers, you could argue there are many, of the current timeline that we live in, is that Jack Kirby passed before he got to see any of this,” said Feige.

The Eternals arrives in the midst of Marvel Studios’ busiest year ever, which has seen it launch three films (with a fourth on the way) and dive into streaming for the first time on Disney+. It also comes amid a big moment for Andy Serkis, a member of the Marvel family who appeared as the villain Ulysses Klaue in Avengers: Age of Ultron (2015) and Black Panther (2018).

Serkis stepped behind the camera for Venom: Let There Be Carnage, which not only was a pandemic-era hit, but also featured a post-credits scene that shocked fans.

[Warning: the below contains spoilers for Venom: Let There Be Carnage.]

In the final moments of Let There Be Carnage, Eddie Brock/Venom (Tom Hardy) find themselves transported to the Marvel Cinematic Universe, where J. Jonah Jameson (J.K. Simmons) appears on television railing against Peter Parker/Spider-Man (Tom Holland). It was a major move, as the Venom universe, which is controlled by Sony, has been separate from the Disney-owned MCU. It sets the stage for a potential meeting between comic book rivals Venom and Spider-Man in a future film, though it’s unclear when that may happen. Peter Parker next appears in Sony and Marvel’s Spider-Man: No Way Home, which opens Dec. 17.

Asked how that scene came together, Feige noted it took a lot of coordination between Sony and Marvel.

“There was a lot of coordination — and if you don’t know all the coordination yet, I’m not going to be the one to tell you — but yes, between Sony and Marvel and the Venom team and the No Way Home team,” said Feige. “We worked together on it.”

Serkis will move to yet another comic book universe in March, when he will be seen as Alfred in The Batman for Warner Bros. and DC. A new trailer dropped Saturday, and Feige was among those who checked it out.

“I thought it was great, and I thought [Serkis] was great and everybody was great. And Jeffrey Wright, our Watcher, is great,” said Feige, referencing Wright’s roles of Commissioner Gordon in DC’s The Batman and the narrator in the Marvel series What If…? “I am beginning to think it’s Jeffrey Wright’s world and we live in it.”

As for Eternals, Feige acknowledges it’s a big swing bringing a lesser-known property to the screen with a big-budget movie.

Said Feige: “We are very, very proud of it. Yes, it’s 10 characters nobody has heard of. But it is the heart and soul of what Jack Kirby brought to our universe.”

Eternals arrives in theaters on Nov. 5. 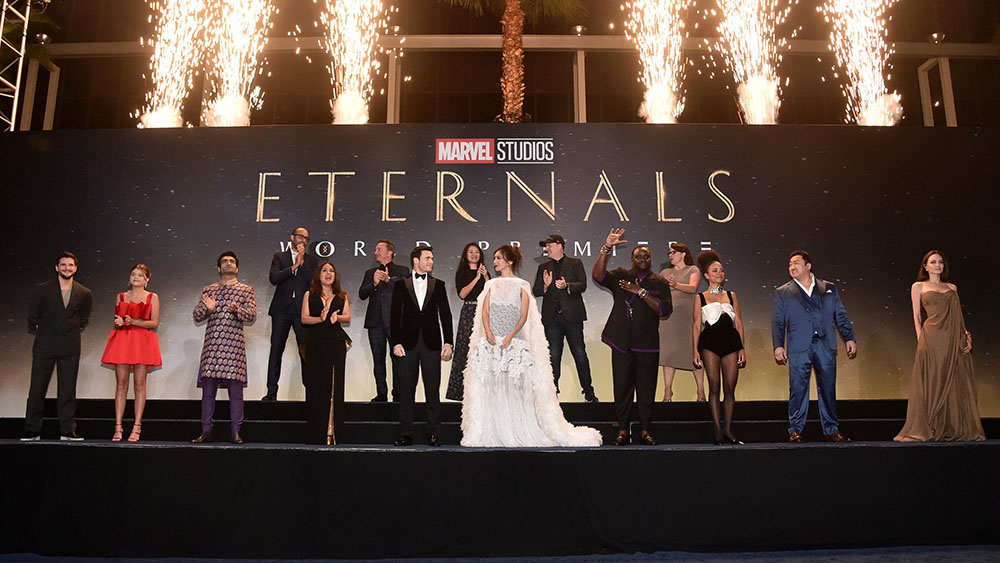