Three years ago, Kirill Serebrennikov, Russia’s most celebrated theater director and the helmer of several films — the most recent being the 2018 rock musical Leto, in competition for the Palme d’Or at Cannes — woke up to find himself in a nightmare straight out of a Franz Kafka novel. His apartment and the offices of his Gogol Center, a state-funded theater, were raided by investigators who claimed he’d embezzled several million dollars in public funds.

Thousands of supporters from Moscow’s tight-knit arts community and around the world rallied to his side, saying he’d been set up by the Russian government and Orthodox Church — two powerful institutions that were less than pleased with his provocative theater pieces, which openly criticized Russian President Vladimir Putin’s policies, such as the 2014 annexation of Crimea and the state’s criminalization of LGBT people via homophobic propaganda laws.

The trial forced Serebrennikov, 50, into house arrest for two years, where he sat even as one of his splashiest productions — the 2017 ballet Nureyev, which explored gay themes in telling the life of Russian ballet great Rudolf Nureyev — premiered to international acclaim.

On June 26, three years into the ordeal, Serebrennikov was finally found guilty, due in part to the testimony of Nina Maslyayava, a former accountant who pleaded guilty to diverting funds. (Her sentencing comes June 30.) The verdict, which was denounced by Human Rights Watch, came with a suspended sentence of three years and a 800,000 ruble fine ($11,400).

Serebrennikov spoke to the The Hollywood Reporter from his country home outside Moscow in his first major interview since his sentencing.

Hello, Kirill. First of all, I’m grateful you are doing this and allowing us to bring your story to our audience.

I have no plan to tell my full story because it’s not the point, I think. It’s still too close to all this fucking terrible business. Let’s talk about cinema, about movies, about something else.

You don’t want to talk about the trial?

I have nothing to tell. I could tell you only that it’s a terrible thing, and of course I can’t agree with what they say about me. They called me a thief and other bad words, a scammer. I’m not a thief, I’m not a scammer. I reject it, of course. I’m sure that some day when the circumstances change, an acquittal decision will be made. But it’s a question of time.

I have to ask, the prosecutor was asking for six years in an internment camp, and you got what amounts to a three-year probation. You must have been scared. How did you feel when you found out your sentence?

For me it’s all the same. Of course, prison is not really good — but I was quite ready for everything because I obviously knew that they want blood. They wanted to make me guilty of every fucking thing. They had no [evidence] in the case. The case is just ridiculous. Money normally is the last thing I ask about. [It’s been] three years of lies, three years of adventures, three years of new experience and, by the way, three years of new friends. I’m so happy that a lot of people who have worked with me said from day one to the very last moment of this process that, “Kirill, we are with you, we know everything about you, we are the witnesses of the platform of your projects, and we will support you in any case.”

Among your many supporters were Cate Blanchett and Lars von Trier, who signed an open letter demanding your exoneration.

What has your life been like the past three years?

I was under house arrest for almost two years. But the last year I was quite free. There were two trials: The first ended with the chairman of the court closing the case, saying there was no evidence, that it’s rubbish. Then suddenly they started it again and made a second trial. The second trial was much wilder and weirder and it was clear that they wanted everything to lead to a guilty verdict. 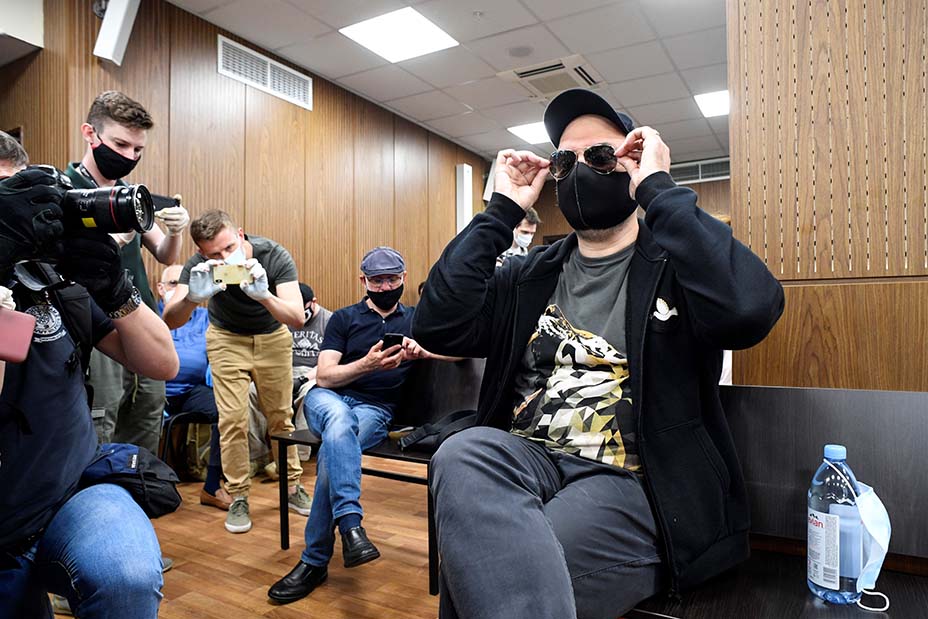 When you say “they,” is there a particular person or people in government leading the charge on this?

No, no, no, no. I don’t want to even talk in these terms. When I say “they,” it means “not me.” Not we, who are fighting for the truth and for our not-guiltyness. To mount 340 theatrical events in three years, [as we did], it’s quite a lot. They told us it’s not theater, it’s a “criminal community.” They refused to consider any evidence we showed them. All these projects were captured on video, everything was filmed. It was quite easy to see where the money went. But they didn’t want to.

So you are now free to move about and continue making theater?

I live in Moscow. I can leave Moscow for any place in Russia, but I can’t leave the country until I pay a lot of money to the Ministry of Culture, which I definitely don’t have. People from all over the world — Germany, Austria, France, theater people, actually — have been writing me telling me they are starting to collect money to “buy you out.”

How many rubles is the court demanding you pay?

But in the millions?

I was in a little bit of a foggy state when they said it, but I’m told it’s almost $2 million.

I assume now you are very famous when you walk down the street.

I’m not sure that all people in Russia are so fascinated with theater. I’m well known among people who are interested in theater in Moscow, of course. But for people who watch propaganda on TV, I’m just a strange, controversial person who steals money and who makes terrible shows with contemporary art which is obviously terrible and provoking and controversial and so forth. “All these faggots from contemporary theater should be sentenced — not to death, of course, but to something.”

When you walk around Moscow, what is the reaction to you?

A lot of people just come up and shake my hand.

That must be nice.

Of course, but I’m not a person who is collecting reactions. I’m in the countryside right now,  just sitting in my house. I don’t want to be in town because it’s very hot. Next to the lake and the forest, it’s easier. I want just to refresh my mind and to work a bit on writing and reading and watching films. I’m trying to refocus myself.

I understand you are half-Jewish.

Do you talk about your personal life? Are you in a relationship?

Look, I am single. I’m in a relationship with my work. The last year was very productive for me. I wrote three film scripts and two plays.

You mentioned before how the general public thinks of your group as “faggots.” You hear a lot about the rise of homophobia in Russia. And of course its long history of anti-Semitism. How bad is the situation now for vulnerable minority groups like those?

Gogol Center, which I have run for almost eight years, is a state theater and it’s funded by the state. You don’t have the same in the U.S. You even don’t have the minister of fucking culture, but we have it. So yeah, we are funded by the Moscow Ministry of Culture. These are not the people who sued me, it’s other people. But anyway, we see ourselves as a kind of island of freedom. The troupe is really young and very, very cool. Very gifted people.

I saw a documentary about gay bashing in Russia and there was all kinds of chaos when they attempted to launch an LGBT film festival in Moscow. Many of your works are very gay-positive, like the biographical ballet Nureyev. Did you face similar threats over those works?

Look, I’m gay-positive because the rights of gay people are under [attack]. We have terrible laws about the propaganda of homosexuality. It’s sometimes really a danger to be openly gay. At the same time, we have a very gay scene here — people in TV, in pop music — and nobody says anything. I think Russian people are not homophobic. They don’t care. Sometimes journalists ask of me, “Why you do so much work about gay topics?” I’m always saying, “Look, if gay people are under pressure, then art and particular theater should be on their side.” If there is trauma somewhere that’s where we should be — with theater, with art, with everything, right?

What was it like to be locked up at home when Nureyev premiered in 2017?

I was under house arrest and at the same moment the fucking minister of culture and a lot of officials were applauding this ballet in Bolshoi Theater. I was sitting at home and they were applauding my work. It was quite a strange moment for me.

They said, “I have nothing against him as an artist, we are just opposed to his financial tricks.” But there are no financial tricks and I never, ever dealt with the financial department. I understand nothing about fucking money. All my career, I tried to be as far as possible from all this fucking money — and now I’m in a trial about money. What a fucking hell.

Like any true artist, finance is not your forte.