The Hulu rom-com, co-written and directed by DuVall, follows Harper (played by Mackenzie Davis) who brings her girlfriend (Stewart) home to her family for the holidays without revealing that she has not yet come out to her parents. Mary Steenburgen and Victor Garber play Harper’s conservative mother and father, with Brie, Plaza and Dan Levy also co-starring.

At the premiere, held on the rooftop of The Grove’s parking structure, a masked DuVall told the crowd of cars, “You get so used to not seeing yourself represented in films, and then realizing that you can just make the movie that you’ve always wanted to see was incredibly special.” Bringing her cast up onstage under the large projection screen, she thanked those from the film not at the event and added, “I’m so excited for everyone to be able to watch this movie safely at home after the year we’ve all had, it just means a tremendous amount.”

Amid a wave of honks (which have replaced applause in the drive-in era), Stewart spoke to the gay love story’s significance to her as well, saying, “I wish I had something similar to this movie as I was a younger person watching Christmas movies — I’d love a gay Christmas movie, it’s synonymous with fun and happy. Also if I saw this movie and I wasn’t in it, and I saw Clea doing this with other people, I’d be beside myself, so thank God I’m in it. Thank you for putting me in this movie.”

Continuing down the cast line, Brie played hype man, asking the cars to “honk if you can hear me!” and Plaza celebrating that “we’re watching this on a big-ass screen.” Co-writer Mary Holland also joined the cast onstage, noting it was “the most fun production to work on” as Stewart chimed in, “So fun, fucking fun!”

Natasha Lyonne and Abbi Jacobson were also in attendance, showing support for close friend DuVall from the crowd.

Upon arrival at the rooftop, guests were given snack boxes and cups of hot apple cider, and were also asked to bring donations of winter coats, blankets and socks to benefit the Los Angeles LGBT Center’s youth. Ahead of the film, the screen also showed a message asking for support of the center to “help us make it the Happiest Season for everyone in need.” 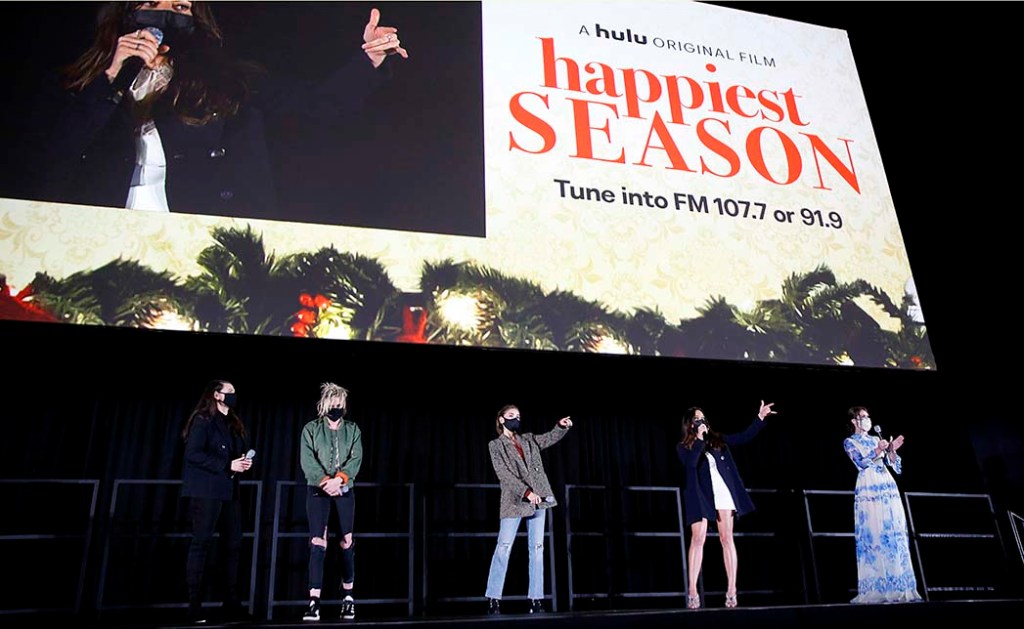