With 2020 officially underway, Fox is bringing the Kristen Stewart-starring thriller Underwater to theaters on Jan. 10, hoping to catch audiences that have already seen Star Wars: Rise of Skywalker or other holiday releases and are looking for something new.

Stewart stars as Norah, one of a team of researchers sent to a deep-water facility, cut off from the surface world for long stretches of time. One day the lab is disturbed by an earthquake and while things seem fine at first, it soon becomes clear that something dangerous was unleashed by the quake. With no support available, the team has to scramble for survival while investigating the mystery of what’s out there.

In selling the film, one of several horror movies coming out this season, Disney’s 20th Century Fox marketing campaign has focused on using the confined spaces and sense of isolation to create a sense of dread while keeping whatever danger the characters face carefully hidden. (Currently the film has a mixed 47 percent rating on critic aggregator Rotten Tomatoes.) 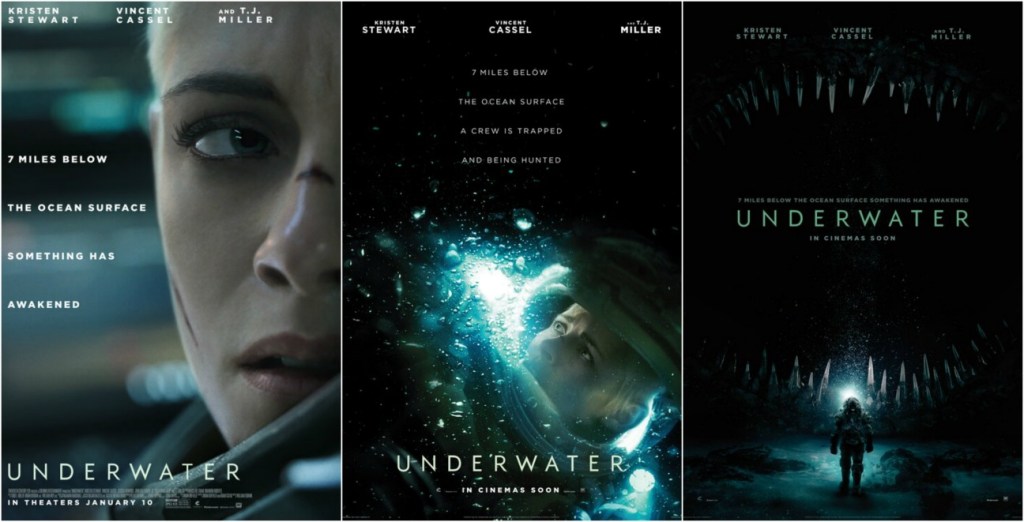 Copy along the side of the first and only domestic poster (by marketing agency LA), released in August, lays out the setting of the story so the audience understands the pressure faced by the characters. Norah’s half-obscured face is shown looking slightly battered by whatever she’s already faced. Additional posters, seen above, show designs for markets outside the U.S.

As soon as the first trailer (4.8 million views on YouTube) from August starts we get the setting of the story, that a group of researchers has gone to the bottom of the ocean on a long-term research mission.

In the clip, some kind of earthquake or impact causes damage to the station they’re on, forcing the team to struggle for survival, taking extraordinary measures just to get from one minute to the next. They try to get to a nearby backup facility, but don’t have the tools to do so safely and there may be something out in the water that’s trying to eat them.

It’s a tense thriller being sold here, taking advantage of the story’s setting in a confined and dangerous space.

A TV spot released in December skips most of the setup of the story to focus on the danger those on the underwater base face as strange things begin occurring.

That same approach was taken on subsequent spots that took a very literal approach when highlighting the dangers faced by the characters. One commercial had the camera narrowing to showed the walls closing in on the action. Another had cracks forming on the camera lens as we hear about the tremendous pressure at the bottom of the ocean.

Just before Christmas a “Happy Holidays” video came out that juxtaposes a jolly, upbeat version of “Deck the Halls” being sung with footage of the facility’s crew facing death around every corner.

The first clip came out at the end of December showing the team of researchers planning the only escape from the failing facility that’s available to them. The next clip seems to pick up shortly after that, showing just how real those dangers are and how thin the line is between survival and death.

A “making of” featurette released in early January had the cast and crew talking about the tension created by the story as well as the physical endurance they had to have while working with heavy equipment on a mammoth set.

One final TV spot released earlier this week uses previously seen footage to show the threats faced by the crew and the pressure they’re operating under. 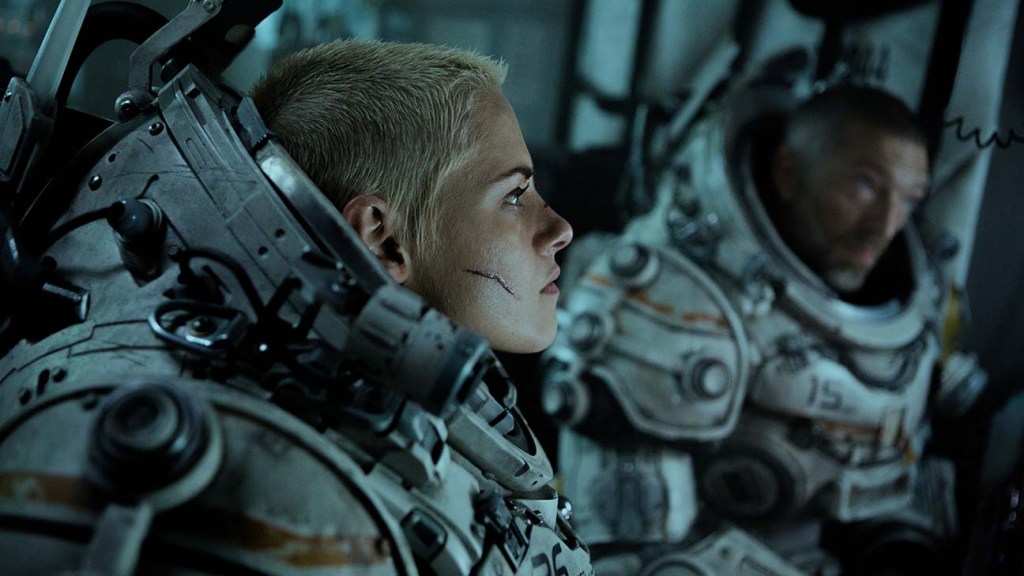 The movie, as presented in the marketing, seems to be as a science-fiction thriller with a serious tone. But it’s also not presented, in tone, as something akin to, say, James Cameron’s The Abyss, which pondered big ideas of our place in the world. On the other hand, Underwater‘s marketing isn’t trying to be overtly ludicrous as something like 2018’s The Meg, which was just about big monsters and big action.

What’s interesting is how the campaign seems to encapsulate how marketing tactics that emerged with the rise of genre-targeted films, especially 2008’s Cloverfield, have become pervasive.

It’s not until viewers get to some of the recent TV commercials that audiences are given any real look at the monsters that are terrorizing the story’s protagonists, and even then they’re mostly in the shadows. Keeping those monsters hidden is designed to increase the sense of danger, building up more jump scares in the theater when people finally get to see them in full. Fox seems to be counting on that kind of anticipation to build up excitement for the movie.