The day after the deadly arson attack on Japan’s Kyoto Animation, police are waiting to question the 41-year-old suspect they just named as Shinji Aoba, while fans and mourners laid flowers and prayed outside the studio.

The narrow streets of the Rokujizo district of Fushimi Ward in Kyoto are usually quiet and peaceful. That peace was shattered on Thursday morning by Aoba, who poured 11 gallons (40 liters) of gasoline around the entrance and first floor of the popular anime studio, dousing staff members and starting a deadly fire.

The suspect also managed to set fire to himself during the attack, severely injuring his legs, chest, face and burning his hair off by the time police found him a few hundred feet from the studio, Hiroyuki Sakai, deputy chief at the local Fushimi Police Station, told The Hollywood Reporter.

“He’s been anesthetized and can’t talk. We’re waiting for word from the doctors on when we can question him,” added Sakai.

Fushimi Ward is a quiet district on the outskirts of Japan’s ancient capital and is unused to dealing with major crime, let alone mass killings.

“We had no murders last year, though unfortunately we did have one in March when a woman stabbed a man,” said Sakai.

A special headquarters has been set up in the gym at the city’s police training college, where around 100 detectives and medical personnel are working on the case, including carrying out autopsies. Five were carried out on Friday, and more are expected to be completed in the coming days. The condition of the bodies varied considerably depending on where they had been found, said Sakai, who added that one was so badly burned that their gender couldn’t be determined.

Once all the victims have been identified and families informed, their names will be released, likely sometime next week.

“This isn’t one of those crime dramas where everything gets resolved in an hour,” said Sakai.

The suspect hasn’t yet been arrested or charged. If and when the case finally comes to trial, prosecutors will undoubtedly seek the death penalty, which in Japan is reserved for multiple murders, robbery-murders and rape-murders.

On the road near the burned-out anime studio, fans were paying their respects. 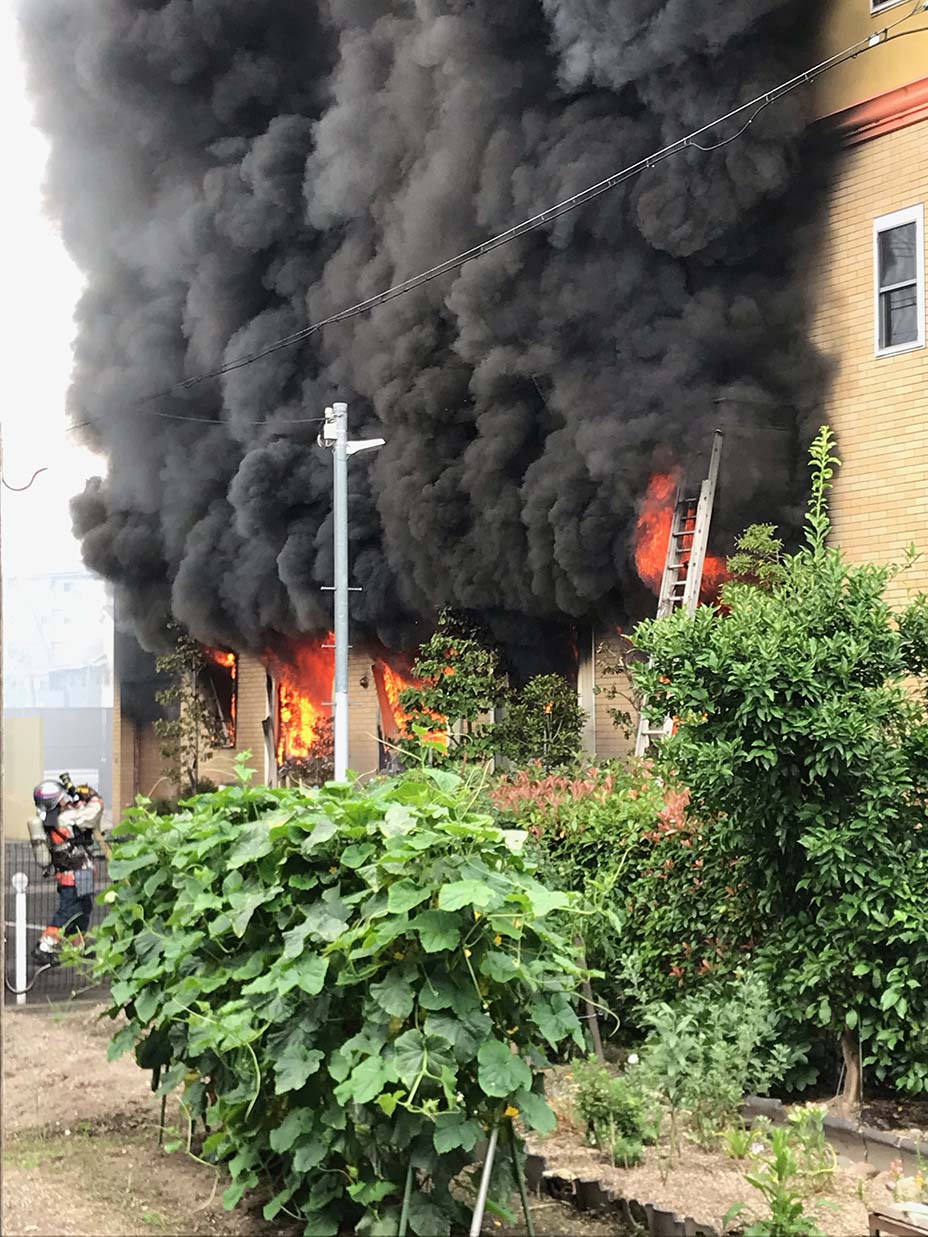 Two visitors from China, who were holidaying in Kyoto, laid yellow flowers, adding to a growing mini-shrine to those who perished.

“I’m a big fan of Kyoto Animation, and felt heartbroken when I heard the news. It’s a totally horrible thing,” said a 24-year-old high school teacher from Zhe Jiang who said she goes by the name Jo in English.

Many just clasped their hands together, bowed their heads and prayed silently in the direction of the charred structure which on Thursday morning had been full of artists who create anime that has won fans from far and wide.

23-year-old Erlend Nordli from Norway is studying manga at Kyoto’s Seika University and has been a fan of KyoAni, as it is often referred to, since high school.

“They make really high-quality anime series. I feel sad and angry, but mostly angry. The reason the guy gave that he thinks they copied his ideas is so stupid,” said Nordli.  “Some people who have graduated from my university went to work at that studio. I just came to pay my respects.”