It takes a village to make a movie. And, in some instances, it takes an entire city.

The Last Black Man in San Francisco, the feature from childhood friends Joe Talbot and Jimmie Fails, acts simultaneously as a love letter and eulogy to its eponymous city. Shot entirely on location, the film relied on the city’s distinctive personality and idiosyncratic characters to create a story that has traveled far beyond the Bay Area.

Based on Fails’ own family story, Last Black Man follows Jimmie (played by Fails) who along with his empathetic best friend, Montgomery, attempts to reclaim the Victorian home his grandfather built in the heart of a rapidly changing San Francisco.

Talbot, 29, and Fails, 25, first met in grade school and became close friends as teenagers, bonding over their love of movies, skateboarding and their multigenerational connection to the city. When living together after high school, it was Talbot who first convinced Fails that his family’s story was something worthy of a 90-minute-plus run time.

“I had a good team that helped me believe that this [was a] story that people wanted to hear, because I didn’t really think anyone would care,” says Fails of the personal narrative. Once he was ready to bring his own intimate story to the screen, the filmmakers had to surmount another obstacle, says Fails: “We had never really written a script before.”

As they began to form an outline and the foundation for the feature, Talbot and fellow co-writer Rob Richert would ask Fails to recount stories from his childhood, including his time living in the family’s Victorian home in the Fillmore District and then being forced out when he was 6 years old. And Talbot would organize the occasional “writers’ retreats,” with the team taking refuge in cabins in places like Big Sur and Nevada City, California. Fails says earlier drafts were filled with more anger. “We were younger and the gentrification was more fresh.”

The screenplay took five years to fully take shape. One thing that never changed? The title. “Oddly, that’s one of the few things that stuck,” Talbot says with a laugh. 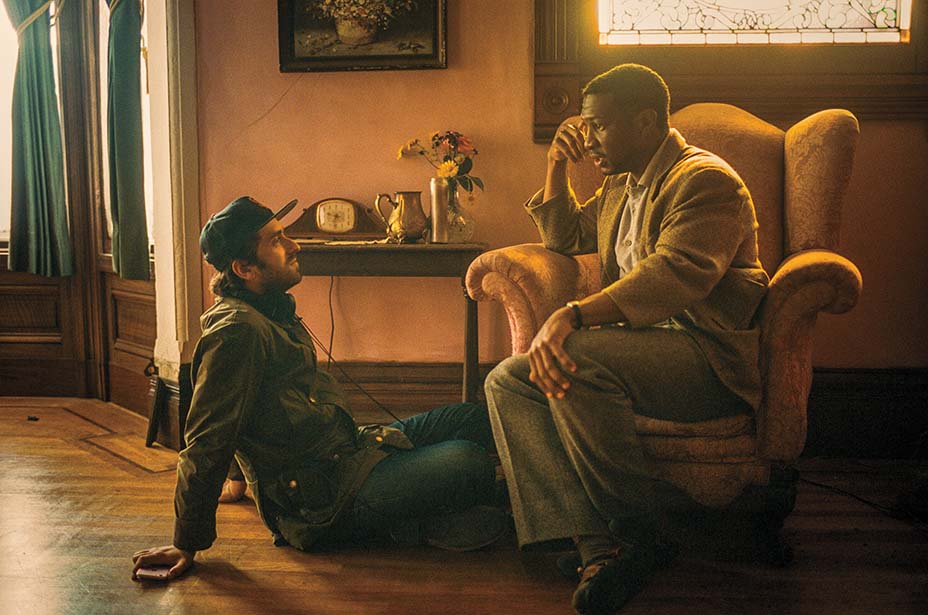 When the screenplay was finished, the Last Black Man team exhausted all of the normal avenues indie filmmakers seek for funding — the project was accepted into the Sundance Screenwriters Lab, grants were applied for, a concept trailer shot and a Kickstarter campaign was created. In the years they spent developing the movie, several independent production companies and financiers had shown varying degrees of interest, but the money never materialized.

“I think at the core people were, rightfully, skeptical of a first-time director and his best friend, who had never acted in a feature film before helming this movie,” admits Talbot.

They then set their sights smaller, settling for a short film. While it didn’t follow the exact beats of Last Black Man, the 18-minute film American Paradise acted as part proof of concept to potential producers, and part personal proof to Talbot and Fails that they could make a movie about San Francisco in the city itself.

American Paradise did the festival rounds, including a 2017 showing at Sundance. It was in Park City that a talent agent sent the film to Christina Oh, an exec at production banner Plan B, along with the tip that Talbot and Fails had a feature screenplay ready to go. “He said, ‘It’s called The Last Black Man in San Francisco.’ I was like, how can you not be intrigued by a title like that?” says Oh with a laugh, adding, “Then I got the script and I had read nothing like it before.”

After a couple of months developing the story with Oh, Talbot and fellow San Francisco-based producer Khaliah Neal, who had worked on American Paradise, went to meet with Plan B principals Dede Gardner and Jeremy Kleiner, who at the time were working from the set of James Gray’s Ad Astra. (“Somewhere off in the distance Brad Pitt was probably hanging from a greenscreen,” jokes Talbot.) Walking in unsure of what to expect, the filmmakers received a production commitment from Gardner and Kleiner, who said they would be bringing in the industry’s hottest indie studio, A24. At the time, the two companies were coming off a best picture win for Barry Jenkins‘ Moonlight.

“I left and cried,” remembers Talbot, who also directed the film. “And then we were in production three months later.” 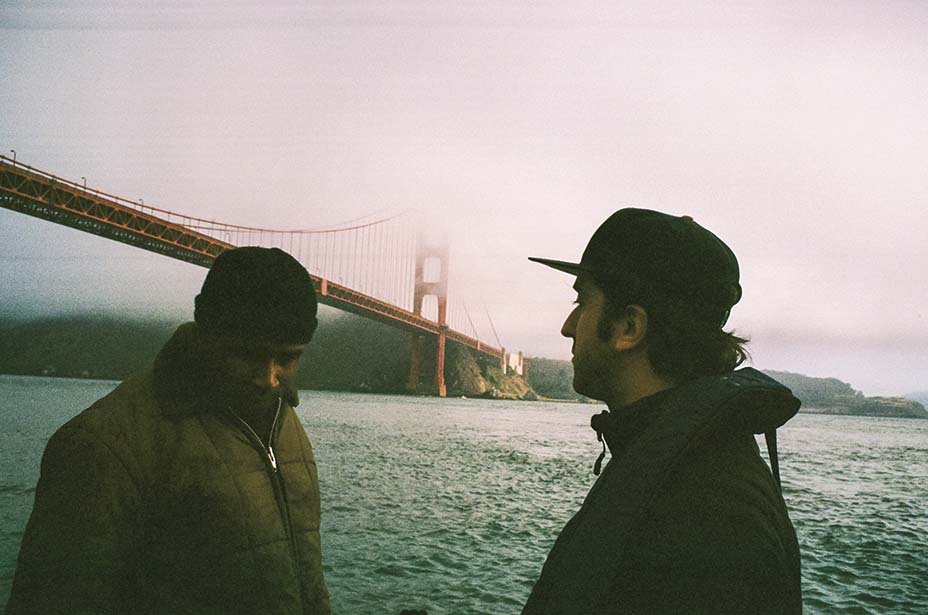 From Vertigo to Dirty Harry to 48 Hours, filming in the Bay area has a long history — one that the city wholeheartedly embraces. The residents may be very different, but they are united when it comes to films that capture their city, like, say, Mrs. Doubtfire. “You can’t say a bad word about it in San Francisco because Robin Williams was like the second dad to a lot of us,” says Talbot of the 1993 San Francisco-set comedy.

But the crew behind Last Black Man quickly discovered that producing an independent feature in the city can be filled with red tape and a hefty price tag. “Most of the movies that shoot here are either tiny films that can sneak in under the radar — like less than $500,000 films — or they are massive Marvel movies that are blowing up the Golden Gate Bridge,” notes Talbot. Last Black Man fell somewhere in between.

So the production relied on local talent to populate its onscreen city. Willie Hen, a musician whom Talbot says “everyone here grows up listening to,” was cast as the movie’s prophetic street preacher, and Jamal Trulove, a well-known aspiring performer who won a $13.1 million wrongful conviction settlement after he was framed for murder by the San Francisco Police Department, also took a role in the film. A Segway-riding tour guide is played by former Dead Kennedys frontman Jello Biafra, a legend from the city’s punk scene.

Even Last Black Man‘s veteran performers held significant ties to the city. Danny Glover, who plays Montgomery’s grandfather, is a native and famously was one of the organizers of the San Francisco State student strike that led to the creation of the nation’s first university-backed black studies program.

Although they had been developing the project for half a decade, in the run-up to their 25-day shoot, the filmmakers found themselves in a frantic race to tie up loose ends. Cinematographer Adam Newport-Berra came on board only 10 days before production began, while co-star Jonathan Majors was officially brought in to play Montgomery only two weeks before cameras started rolling. Says Majors of first reading the screenplay, “I got half a page through, which was all screen direction, and I was floored by the specificity of the world that was being built.”

One city native that was hard to pin down, which would play a silent but nonetheless integral role, was the movie’s centerpiece: a Victorian home. Quintessential San Franciscan Victorians dot postcards and calendars in tchotchke shops that line the streets surrounding the city’s tourist destinations, like Fisherman’s Wharf. And while the facades of the houses, mostly built in the 1800s, remain prized and, consequently, impeccably maintained, their interiors have been altered to suit more modern sensibilities. With production designer Jona Tochet, Talbot knocked on heavy wooden doors attempting to find a home that had maintained some semblance of originality. 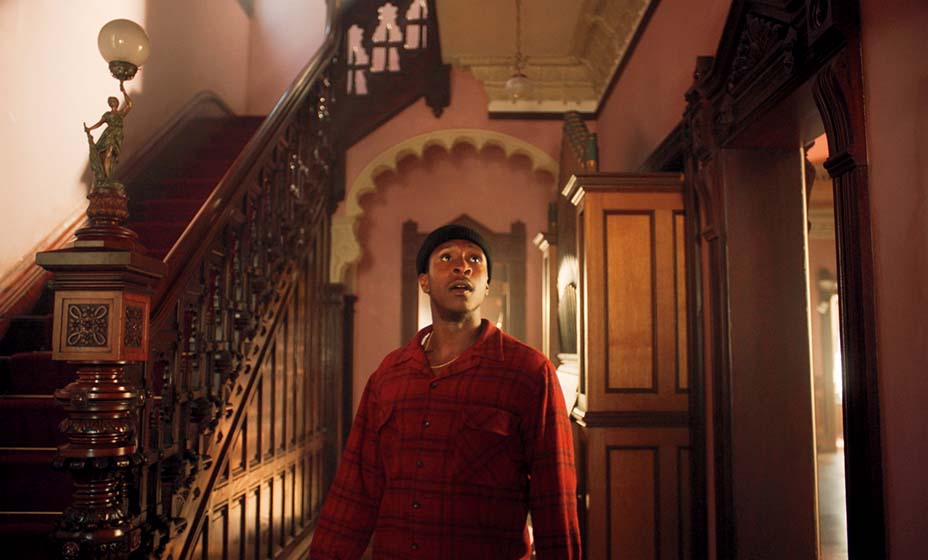 “All these beautiful houses have had their guts replaced by open floor plans,” says Talbot. “It’s poetic because [San Francisco] is a city that seems liberal on the outside, but on the inside it’s perhaps not as liberal as it would like to think it is. That’s what those Victorians feel like.”

Talbot and Tochet were walking in the Shotwell Historic District, passing a Queen Anne home that Talbot recognized from his childhood. “I used to drive by with my mom and my brother on the way to school,” says the director, who approached the house and was greeted by its longtime owner, Jim Tyler. As Talbot describes him, Tyler is the “preeminent organ repairman on the West Coast” and has spent decades restoring and maintaining the house himself, adding a secret passageway between rooms, an alcove for his beloved organ (which Fails can be seen playing in the movie) and replacing the witches hat roof.

“He felt Jimmie-like in that way,” says Talbot. “A man that has put all of this life into this property.” Tyler never seemed deterred by any damage his house might incur from the production, the possible wear of having 50-plus people trodding up and down the stairs holding the ornamental banister or careening around the mahogany built-ins. “I think he saw it as a celebration of his life’s work,” says the director. “He was like a fairy godfather.”

Last Black Man‘s other locations are, essentially, a walking map of Talbot’s and Fails’ childhoods. “We’re pulling from a collective lifetime spent walking our streets,” says Talbot. They filmed in the Tenderloin, Fillmore, and Hunters Point neighborhoods, from the unfathomably steep streets they used to bomb on skateboards to the parks where they would pass time.

Majors specifically remembers scaling the hill in Bernal Heights for a shot. “From the top of it, you can see the vista of San Francisco,” he says. “It’s the type of shot you would only do if you lived there, because you knew it was there.”

Two years after their short screened, Talbot and Fails were back at Sundance, sitting in the Eccles Theater for their feature film debut. “We had just finished editing the last cut the day before it premiered,” remembers Fails. But it was their hometown screening in the Castro District that stands out for the duo. “People were weeping in the introduction to the film,” says Talbot. “It was audible.”

In a San Francisco where Slouching Towards Bethlehem has given way to Salesforce Tower, Last Black Man is a reminder of the bohemia and activism the city once fostered. Explains Talbot, “The story taps into this nostalgia that a lot of us have who remember old San Francisco and remember art in San Francisco and what that felt like to be a part of that scene.”

With their debut, Fails and Talbot have joined the cinematic wave of contemporary Bay Area filmmakers whose projects provide commentary on issues plaguing the city, from gentrification to racial tensions. The list includes Ryan Coogler, who made his feature debut with Fruitvale Station, as well as Blindspotting team Rafael Casal and Daveed Diggs, and Boots Riley, who wowed at Sundance the previous year with his directorial debut Sorry to Bother You, and Jenkins with his early entry Medicine for Melancholy.

“We always felt like we were in isolation up in San Francisco,” says Talbot. “Geographically we’re not that far from L.A., but it can feel like a million miles away.”

While Hollywood has recognized the talent behind the film, which has earned a cadre of Indie Spirit and Gotham Award nominations, San Francisco has also taken note. Says Talbot, “Jimmie gets recognized by half the city and the other half is like, ‘Fuck you, Jimmie.’ ” Adds Fails: “Even though you know you’ve accomplished a lot of things, you still have to have your friends tell you that you’re not shit.”

The irony that the film they made about, in and for San Francisco has taken them out of the city is not lost on the pair. Currently, they are each splitting their time between the Bay Area and Los Angeles. “Being able to go back for our own sanity is something that’s going to be a driving force going forward in our careers,” says Fails. “No city will ever inspire me like San Francisco does.”