Phil Lord and Chris Miller are stepping into territory that few film producers find themselves in: becoming the faces of their movies.

The duo have built a comedic brand with directorial efforts such as 21 Jump Street (2012) and The Lego Movie (2014). But over the past two months, they have been at the forefront of the film world’s consciousness by producing two animated successes — the Oscar-nominated hit Spider-Man: Into the Spider-Verse and this week’s The Lego Movie 2: The Second Part.

The producing duo has been touted in the marketing and singled out in reviews for both projects. (In addition to producing, Lord and Miller penned Lego Movie 2, while Lord received a writing credit for Spider-Man: Into the Spider-Verse, shared with co-director Rodney Rothman.)

“That The Lego Movie 2: The Second Part is even close to as good as the original film is kind of a miracle,” wrote Germain Lussier in his review of the film for io9. “But that’s what writers Phil Lord and Chris Miller do. They take impossible situations (like making movies about 21 Jump Street or Lego bricks, and then make sequels to those movies) and make them not just possible, but maybe even a bit profound.”

Touting producers as the face of a film is not new. ’90s action icon Jerry Bruckheimer is a famous example, as is Tim Burton, who did not write or direct Tim Burton’s The Nightmare Before Christmas. Today, a producer figure like Jason Blum is seen as the guiding hand of the horror entries at Blumhouse. And producers James Cameron and Jon Landau are all over the marketing for next week’s Alita: Battle Angel, which Cameron co-wrote and Robert Rodriguez directed.

Conceptualized by French critics in the late 1940s and early 1950s, auteur theory suggests that the director is the author of a film, that the director is the source of the vision that defines the film’s style. It’s what gives us the notion of “a Christopher Nolan film,” often nonlinear and gritty, and with a layered third act — or “an Edgar Wright film,” often fast-paced, sharp and witty, and deconstructive of genres. But for decades, the theory has been criticized as ignoring the hundreds, or even thousands, of people that work on a film. What is a Martin Scorsese film without film editor Thelma Schoonmaker?

To Tom Schatz, a professor in the Department of Radio-Television-Film at the University of Texas at Austin, it makes sense that Lord and Miller are being pointed to for Spider-Verse and Lego Movie 2.

“They’re the auteur flavors of, if not the month, the moment, and rightfully so,” Schatz tells The Hollywood Reporter. “The Lego Movie is a pretty sharp piece of work, and they’ve developed a pretty strong track record so far.”

Schatz is currently teaching a course on Scorsese, which is a part of his rotation of courses that also covers Alfred Hitchcock and Clint Eastwood, in addition to an American independent film class that focuses on “indie auteurs” like Wes Anderson, the Coen brothers and Alexander Payne.

“I encourage the students to think about just how complicated the notion of authorship has gotten in contemporary Hollywood,” Schatz says. “By the time we get to the end of the semester in any of these courses, but particularly the Scorsese and Eastwood classes, we’re also thinking about [Steven] Spielberg, Chris Nolan, [James] Cameron and those guys.”

Auteur theory encounters a different framework when it comes to animation, and that might also be why Lord and Miller are in the spotlight for films they didn’t direct.

“Some of [Lord and Miller’s] reputation has been built in segments of the industry where the on-set director’s prominence is less pronounced: animation and television,” says J.D. Connor, associate professor at USC’s School of Cinematic Arts. “In animation, credit has always been slightly more diffuse.”

Connor points to Pixar as an example of when credit in animation is directed toward a studio brand as much as a director. But Schatz notes that Pixar has also highlighted individual talents in animation.

“That industry has always been creation-by-committee, until Pixar,” Schatz says. “Brad Bird, with the first Incredibles movie, that was really the first really serious writer-director effort. Pixar has changed the rules of the game in terms of animation authorship. Lord and Miller, I think, are very much a part of that.”

Another part of it may come down to that second segment that Connor highlights: television, where the notion of authorship shifts again.

“In the older model, the TV executive producer-head writer is the auteur of the series and the director is a hired hand,” Connor says.

Consider Game of Thrones creators and showrunners David Benioff and D.B. Weiss. Many of the series’ most acclaimed episodes weren’t directed by them, like “Hardhome” and “Battle of the Bastards,” both directed by Miguel Sapochnik. And yet, Benioff and Weiss are seen as the powers behind the show, laboring to take author George R.R. Martin’s work to a new medium — and even telling his story before he’s able to tell it himself in his still-unpublished final two novels.

But in today’s world, the mediums of film and television are blurring. HBO’s True Detective saw Cary Joji Fukunaga in the director’s chair for the entire first season. Fukunaga did not return for the critically disappointing second season, which cycled through a number of directors, and an argument has waged over if Fukunaga or creator and writer Nic Pizzolatto was the true auteur visionary behind season one’s success.

It’s going the other way, too. In the film world, franchises like the Marvel Cinematic Universe are echoing the seriality of television.

“The film and television industries have cross-fertilized with a vengeance in terms of franchising, where basically, successful films become series,” Schatz says.

Cinematic universes have looked to producer figures, like Marvel’s Kevin Feige and Lucasfilm’s Kathleen Kennedy for Star Wars, to steer the ship. And there’ve been multiple times in recent years where strong producers butted heads with auteur film directors.

Joss Whedon, a recent subject of an auteur theory course at the University of California at Berkeley, had notable creative differences with Marvel executives when working on 2015’s Avengers: Age of Ultron. “It got really, really unpleasant,” Whedon said on the Empire Film Podcast in 2015 about the differences, describing how executives leveraged their wish for the scene of Thor envisioning the infinity stones in a cave against Whedon’s wish to visit Hawkeye’s farm home. “They pointed a gun at the farm’s head and said, ‘Give us the cave, or we’ll take out the farm’ — in a civilized way.” Whedon’s struggles seemingly represented an auteur fighting for his vision.

Lord and Miller’s differences with Kennedy and writer-producer Lawrence Kasdan on Solo: A Star Wars Story ended in something more drastic, the pair being fired as directors in June 2017.

Sources told THR at the time that Kennedy and Kasdan were unhappy with the slow progression of the film and the improvisational style of Lord and Miller — while Lord and Miller, according to a source close to them, felt they had “zero creative freedom” and had to shoot within “extreme scheduling constraints.” Sources told THR back then that Kennedy attempted to take a similar path as Rogue One: A Star Wars Story, which saw Tony Gilroy rework the story and oversee reshoots in cooperation with director Gareth Edward, but that Lord and Miller wouldn’t work in the same way.

“I don’t know what their version of that movie might have been, but it certainly wasn’t ‘hired hand’ storytelling,” Connor says. In that instance, Lord and Miller could be seen in the same light as Whedon — as auteurs struggling against the control of a studio.

But there’s overlooked piece of Spider-Man: Into the Spider-Verse history: Lord and Miller technically were hired hands. According to the filmmakers, Sony and producers Amy Pascal and Avi Arad presented the original idea to them. That’s something that often happens with big-name director projects without many noticing. Christopher Nolan’s Interstellar was a concept originally conceived by producers Kip Thorne and Lynda Obst, and as early as 2006, Steven Spielberg was eyeing to direct.

Schatz has his own story that he tells his students about one of Scorsese’s most famous films.

“When we do Raging Bull, I let them know that that actually was a De Niro project,” he says. “De Niro had the rights to the book, he hired Paul Schrader to script it, and talked Scorsese into directing it.”

But that doesn’t stop Schatz from viewing it as a film from an auteur.

“It’s heralded as a Scorsese film, and rightfully so, in terms of his control of the project once he’s directing,” says Schatz.

Control gets a little more complicated with Spider-Verse, and Connor stresses the job of the film’s three directors: Rodney Rothman, Bob Persichetti and Peter Ramsey.

“The directors are getting a lot of credit, though, especially for things that Lord and Miller didn’t have much to do with, if anything,” he says, pointing to the specifics of the directors’ hands, like the wide range of animation styles.

But Schatz still sees it as part of their oeuvre.

“This new Spider-Man movie is a real reboot, and even with just one of them [credited in writing], it does have that playful, extremely smart sensibility that I think we recognize from other things, particularly the first Lego movie,” he says. “It’s not surprising that they’re using these guys as a way to single out that film and to generate a bit more leverage.”

The Lego Movie 2, directed by animation vet Mike Mitchell, is in theaters now.

Why It's So Hard to Make a Good Toy Movie 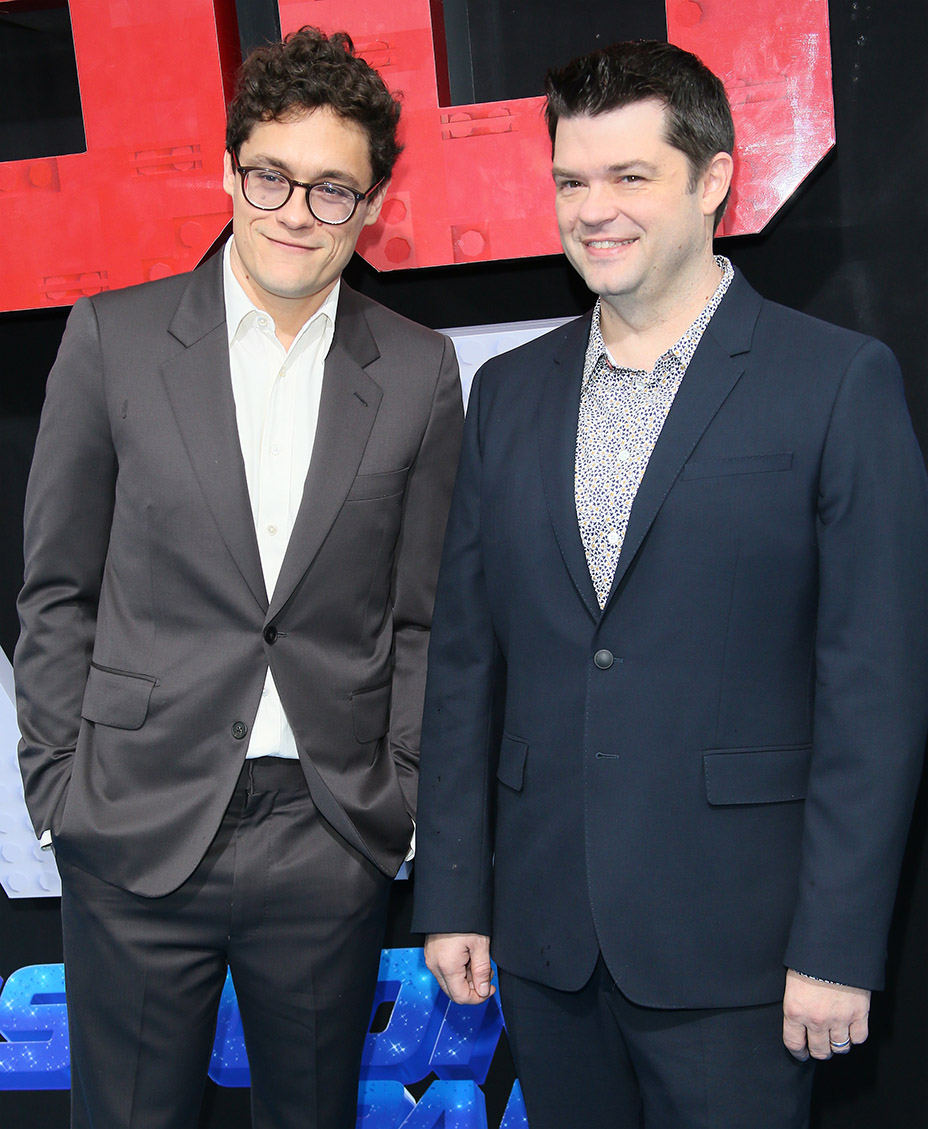