Five years ago, The Lego Movie was an unexpected hit both with audiences and critics, the former attracted by the quick-fire, self-referential humor and an impressive voice cast and the latter wooed by a surprisingly emotional story that dug deeper than a movie based on a construction toy line really needed to.

Warner Bros. has since extended the film franchise with a Batman solo film and one featuring their Ninjago line of characters. Now it brings Chris Pratt, Elizabeth Banks, Will Arnett and the rest of the cast back together for an official sequel, The Lego Movie 2: The Second Part. Set five years after the original, the story sees Emmet (Pratt), Wyldstyle (Banks) and the rest of the residents of still dealing with the fallout of the collapse of President Business (Will Ferrell). When Duplo invaders kidnap Wyldstyle, Emmet and the others have to go rescue her.

This time around, the Lego team is primarily going up against itself and its own expectations. Critics have been helping: The film has a 93 percent score on review aggregator Rotten Tomatoes. Here’s how the film marketing has been rolled out:

The teaser poster released last June presents the mysterious Duplo invader as the adversary of the story, showing Emmet, Wyldstyle and the others in the reflection of the character’s helmet. The copy “They come in pieces” is a nice nod both the nature of the toys and the fact that the story takes everyone into outerspace where there are, to quote Benny (voiced by Charlie Day), “Spaceships!”

In late November the studio released a whole series of character posters offering better looks at who was returning and who was new to this movie, each with the name of the actor providing their voice. That allows Pratt two posters, one where he “is Emmet” and one where he “is also Rex Dangervest.”

All the main characters came together on the theatrical poster, which uses the same copy seen on the teaser but positions them in a triangle formation, separated by a beam of light and with Batman at the pinnacle. They’re all slightly rearranged on an alternate poster, which eschews the colorful approach taken so far for a monochromatic purple and blue color palette.

An IMAX one-sheet features the same collection of characters but adds Wonder Woman and Superman to the mix. The tagline at the top references the hit song from the first movie by promising audiences this one will be “More awesome in IMAX.”

Wyldstyle narrates the opening of the first trailer (10.6 million views on YouTube). Released in June, it introduces us to the Mad Max-like wasteland that is Bricksburg in the aftermath of Taco Tuesday. Despite that, Emmet seems as chipper as ever, cheerfully greeting cyborgs and mutants. A strange new ship arrives and kidnaps Lucy, Batman, 1980s Space Guy and others, meaning Emmet has to go and rescue them. The movie’s humor is made clear to the audience by showing how Emmet is “The Special” despite Wyldstyle doing all the work and by having Emmet pilot a spaceship with a plant in the copilots’ seat, a nice Guardians of the Galaxy gag.

The meta humor is only amped up in November’s second trailer (3.6 million views on YouTube). We get the same basic opening of something crash landing and abducting Wyldstyle. Emmet’s quest to save her brings him into contact with Rex Dangervest, who is an amalgam of a whole bunch of Pratt’s other movie characters, complete with velociraptor sidekick. When the two heroes find who’s behind everything that’s happening they discover characters that are bright and pink and disturbing. It ends with a montage including looks at returning characters like Superman and others. 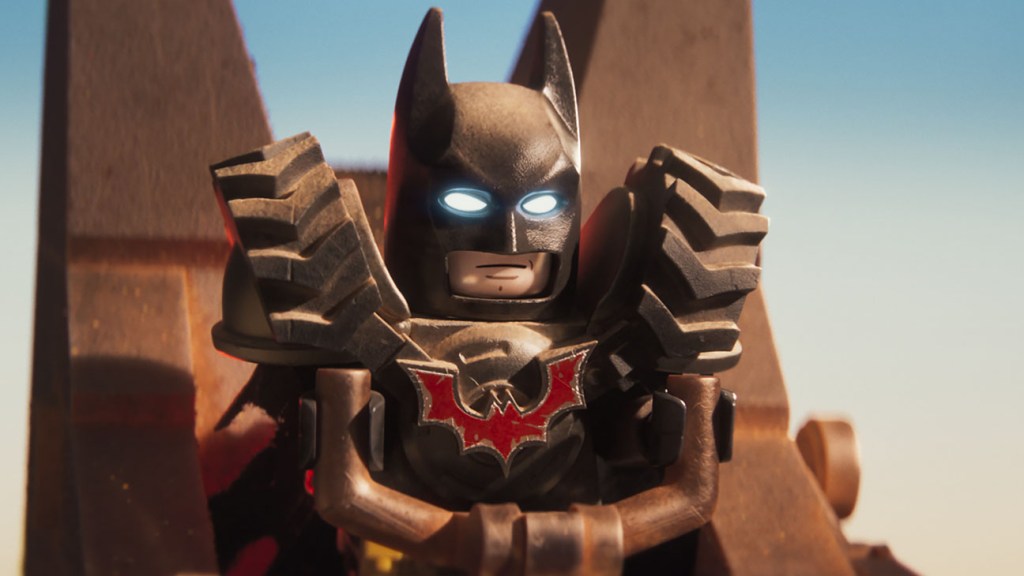 Warner Bros. worked with YouTube to make the original movie free on that platform the day after Thanksgiving last year in a promotion it dubbed “Brick Friday.”

? Discover, which ran a co-branded campaign featuring characters from the movie to help sell the credit card’s late-fee forgiveness feature. That commercial used the company’s long-running format of someone calling a Discover operator who looks and sounds like them, this time showing Wyldstyle calling herself to explain she’s late with her payments.

? Chevrolet, which launched a campaign to sell its Silverado pickup truck. That campaign was launched with a full-size Lego Silverado on display at last January’s Detroit Auto Show. It included a one-minute commercial featuring Emmet building a Silverado from scratch, describing all its features in a way that makes Wyldstyle realize their in a promotional spot.

? Chiquita, which encouraged shoppers to find all the movie-branded stickers placed on bananas at grocery stores and enter a sweepstakes offering assorted prizes.

? Color Me Mine, which offered movie-themed “Kids Night Out” events at locations across the country.

? Visit Denmark, which ran a sweepstakes awarding a trip to the country where Lego got its start.

? HQ Trivia, which promoted a surprise host for the show airing the Wednesday before release and offered movie-themed prizes to players in addition to a $75,000 cash prize.

Other media partnerships also helped bring the movie to the attention of even broader segments of the audience. That included Emmet and the gang invading the “NFL on Fox” studio in January and Queen Watevra Wa’Nabi (voiced by Tiffany Haddish) appearing on a Lego-ized mini-episode of the online show “First We Feast,” where she sampled various hot sauces.

The first TV spot ran in mid-January, showing audiences that all their favorite characters were returning along with some new ones in a story about Emmitt trying to save Lucy from the aliens that kidnapped her. Promoted Tweets and other paid posts on social media boosted the reach of the trailers and other videos while online ads used elements from the trailers and key art to drive traffic to the movie’s website or ticket-buying outlets like Fandango.

The corner of Hollywood and Vine in Los Angeles was host to “The Lego Space,” a recreation of sets and scenes from the movie that offered an interactive experience to visitors and gave them a chance to be among the first to play the movie’s tie-in video game. LEGOLAND Florida ran a sweepstakes awarding the winner a trip to the theme park in Winter Haven, FL.

The movie was part of WB’s CineEurope presentation to exhibitors in June, followed by an appearance by the cast at San Diego Comic-Con in July where they talked about how much fun the movie was to make and showed off the first trailer along with other footage.

In early December a “Holiday Short” was released that had Emmet and Lucy having very different opinions about holiday celebrations, especially in light of the threats they face from the Duplo terror. That was followed in January by a featurette with the cast talking about “The Song That Will Get Stuck Inside Your Head.” The Laker Girls, the dancers at Los Angeles Laker games, performed to that song shortly after it was released.

The first clip from the movie, released in mid-January exclusively by Fandango, showed an extended version of a scene featured in the trailer, that of Emmett blissfully starting his day amidst all kinds of carnage and mayhem. 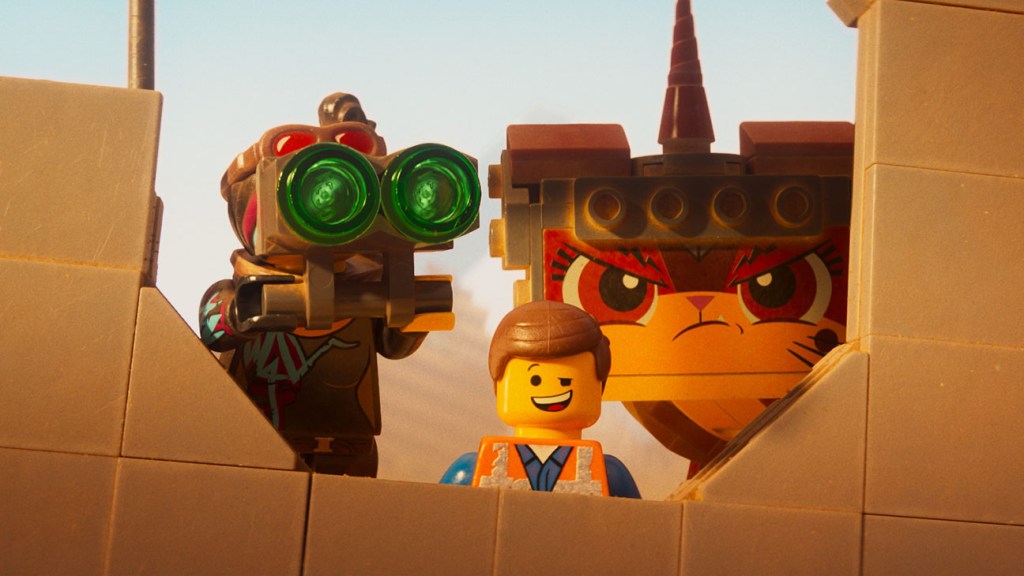 The primary challenge Warner Bros. has faced from the outset of the campaign is to try and surprise the audience yet again. That’s what happened with the first movie in 2014 and with 2017’s The Lego Batman Movie. Since it can’t pull out the same stunt thrice with a known quantity it has leaned into the humor of the story, specifically that involving Pratt’s clueless but lovable and devoted Emmet.

The push is full of jokes about the character, the actor or both but only occasionally mentioning this movie’s story. There’s more effort put into connecting it to the first movie and making sure the audience knows what’s happened in the years since Taco Tuesday happened than in explaining what’s coming next. It’s an approach that seems to embrace quick nostalgia.