When an eminent veteran actor of screen and stage decides to take a late-stage career pivot from starring in traditionally respectable films to starring in films where dramaturgy takes a backseat to punching people, the least we should expect is for those films to be at least halfway decent. So it’d be an exercise in ungraciousness to complain about Liam Neeson’s string of action roles, rooted in his leading turn in Pierre Morel’s Taken back in 2008 and continuing over the past 10 years with two completely unnecessary Taken sequels, a smattering of Taken look-alikes, and occasional intersections between art house and action, a la 2012’s The Grey. For every junk action flick to his credit, he has a gem to match it; for every Run All Night, there’s a Non-Stop.

The better movies in Neeson’s oeuvre as action star tend to be lunkheaded, insubstantial and in a few cases (like Non-Stop) puzzlingly cast, but they work, and the “why” shouldn’t be much of a mystery. Neeson is such a commanding presence that he can lend even dopey, macho action throwbacks the perception of reputability. If watching Neeson save the day is your jam, then January brings good news: his latest,The Commuter, his fourth with director Jaume Collet-Serra, is a cut above the rest. It’s determinedly gritty, sharply made, just serious enough to avoid the cutoff for qualifying as self-serious, and it’s a hoot to watch with a crowd thanks to its one-liners and action beats.

In keeping with the traditions of the Neeson action vehicle, The Commuter has him playing a grizzled ex-tough forced into an extraordinary, dire circumstance in a mundane setting. He is tempted and blackmailed. His family is threatened. He goes on a tear, stops the film’s villains from realizing their nefarious ends and wins back his self-respect. Somewhere in between, he gives the middle finger to Goldman Sachs, too, because Neeson is a hero of the people. But as much as watching Neeson growl his way through dialogue and fistfights is a blast, there’s not much in The Commuter for us to hang onto; your recollection of the film’s set pieces, not to mention the plot stringing them all together, will start dissipating as soon as you leave the theater. It’ll happen slowly at first, and exponentially faster the further you get away from the film.

A highbrow bore might ask why Neeson bothers appearing in movies like this in the first place. Weep for that person, for they’ll never know or understand the distinct pleasure of watching an actor of Neeson’s distinction use a guitar as an improvised weapon in hand-to-hand combat. The better question is why he appears in movies like this that also happen to be totally disposable. Worse, they’re inconsequential, and worse still, they’re all surprisingly formulaic. You can change out the details as you like: Give Neeson a wife and kids, or take them away, or make him a retired cop, or perhaps a CIA agent, or an air marshal, then shove him into an outlandish hostage scenario or terrorist attack on one of the worst days of his life, and presto, you’ve pretty much got the basics down pat. Every once in a while he’ll play a mob enforcer or a doctor or an ex-con, just to freshen things up. 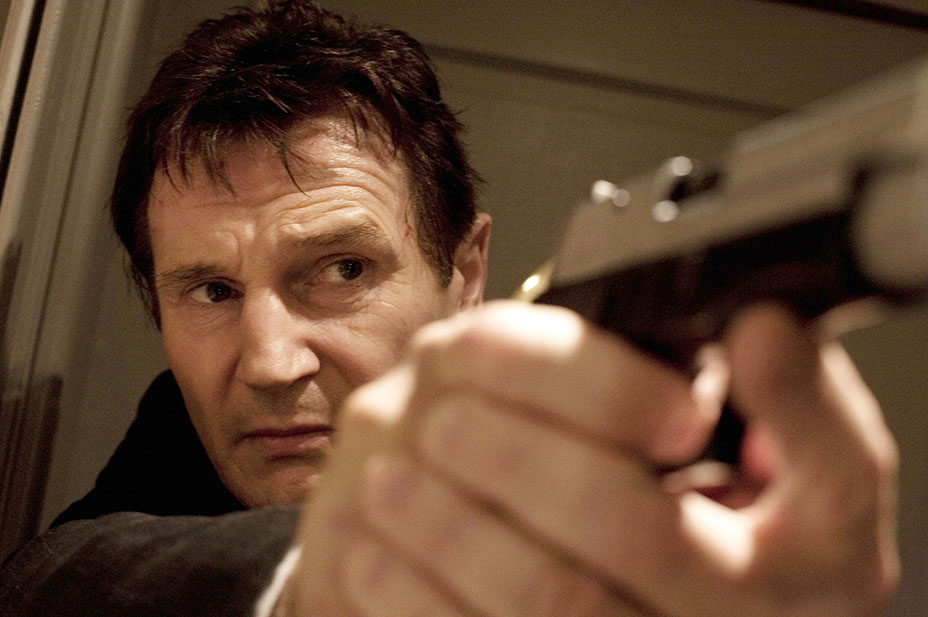 But these narratives almost always play out the same way, even if they don’t always play out with the same efficacy. Not all Liam Neeson action movies are made equal. They’re just made from similar parts used in wildly different capacities, which explains why they’re so often nondescript. He’s assembled a casual sub-filmography of brawny genre entertainments from a handful of uniform plot points. Of course the results are routinely forgettable, “forgettable” meaning “fun while you’re watching, but after 48 hours you won’t remember a damn thing about them.” It’s possible to make a forgettable movie that nonetheless justifies its own production by showing its audience a good time.

With a couple notable exceptions, that describes Neeson’s forays into action across the board, so there’s little use in holding that forgettability against The Commuter specifically: You get the sense that Collet-Serra means to riff on Strangers on a Train, or Murder on the Orient Express, two classic mystery thrillers where locomotives serve as the backdrop, but Hitchcock, Lumet and Christie aside (and heck, why not, let’s throw Branagh in there, too), but he avoids excessive homage. That’s an achievement unto itself. But he also avoids making a movie that’ll last in either popular consciousness or action canon, and if there’s any downside to Neeson’s embracing his inner badass it’s that he keeps choosing projects that are ultimately fleeting. Years from now, we’ll look back at his body of work and think of these movies as a running meme. (That’s pretty much how they’re treated now, after all.)

That’s a shame. Before Neeson was Bryan Mills, he was Oskar Schindler, Rob Roy MacGregor, Michael Collins, Alfred Kinsey, Jean Valjean and Father Fielding; Mills doesn’t besmirch his good name or anything ridiculous like that, but the superfluity of the actor’s post-Taken parts distracts from the kind of actor he is when he’s not kicking ass. He still is that actor — see the brilliant Silence — but the occasional reminder of Neeson’s gravitas, plus his knack for picking movies that leave an impression on their viewers long after they’ve ended, only underscores the temporary pleasures of seeing him solve crimes and beat up anonymous bad guys.