[This story contains minor spoilers for Liondgate’s The Commuter.]

The new conspiracy thriller The Commuter is built around the sky-high concept that star Liam Neeson, playing down-on-his-luck life insurance salesman Mike MacCauley, is a white-collar stiff who’s forced to consider an impossible theoretical question: What if, during your commute home from work, you were asked to identify and implicate a stranger in exchange for $100,000 in cash? Mike initially agrees, since he’s just lost his job — only five years before retirement! — and he doesn’t have the nerve to tell his wife.

Still, The Commuter is, as the title suggests, about an average middle-class American with relatable concerns and priorities. He’d do anything for his family, even read The Lord of the Flies and The Grapes of Wrath with his teenage son. Mike is also defined by his routines. He takes the train into work every day, specifically an imaginary version of the Metro-North’s Hudson line trains (this version  apparently takes multiple stops to reach Yankee Stadium and Harlem). Mike’s a lifer, which should ostensibly make him more sympathetic.

Still, what does a real commuter think of The Commuter?

“I thought it was fun,” Bruce Abrams, my 70-year-old dad, says over the phone after attending Friday night Shabbat services. “I didn’t expect it to be all that serious. I didn’t expect all the dots to connect. And they don’t. But I liked it.”

My dad is a long-suffering commuter. He formally retired from his job as a principal court analyst at the New York County Clerk’s Division of Old Records office four years ago (you can read a 2014 New York Times‘ profile of him here). But he still volunteers there on Fridays, and he still works part-time as a librarian at the College of Staten Island. He also still heroically (and voluntarily) undergoes a commute that would make lesser New Yorkers cry.

To get to the County Clerk’s Manhattan office, at Chambers Street, my dad takes the F train from 179th Street in Queens all the way down to Manhattan. The F line may be notorious to New Yorkers for having the worst delays in the city (according to the inaugural edition of subway journalist Aaron Gordon’s “Signal Problems” newsletter, the F train only had “Good Service,” according to the MTA, 25.5 percent of the time during the week of Jan. 3-10). Nevertheless, my father has no “really strong opinions” about how the subways are being run (into the ground). “I’ve been lucky,” he says, and humbly suggests that he avoids the worst subway kerfluffles because he does not take the F line on weeknights or weekends.

My dad also commutes to Staten Island. He often drives the family car from Long Island to Staten Island. This Odyssean schlep takes about an hour under ideal conditions. But with traffic, it can take almost three hours to get door-to-door, as it did this past Friday (he doesn’t know why it took so long since he left the library at about 2 p.m., well before rush hour). But when Catherine Abrams, my mom, needs the car so that she can attend Manhattan’s Arts Students League, my dad will take the QM3 bus from Little Neck, Queens, to the Staten Island Ferry in lower Manhattan. From there, he takes the S62 bus to the college. That commute usually takes him 120-150 minutes. Neeson has nothing on my dad. 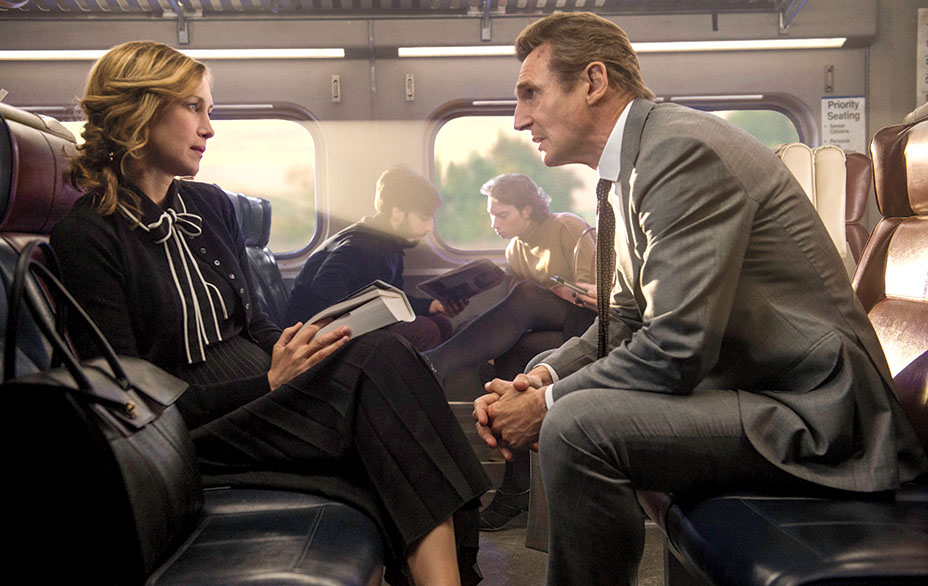 But wait, let’s backtrack for a moment: What did my dad think was so implausible about The Commuter? Some plot contrivances, like how closely surveyed Mike is by a group of criminals who are blackmailing him while he rides a Metro-North train. My dad was also mildly confused by, but ultimately fine with, the notion that Mike is “literate, or at least he reads classic American literature,” though he felt that aspect of Mike’s character wasn’t particularly revealing. Dad also doesn’t believe the mid-film revelation that Mike is actually an ex-cop, though he understands that that twist is necessary to move the plot along. “He seems like a typical office executive up to that point,” he says, adding that he’s thinking specifically of the way that Mike behaves during preliminary pre-train scenes. “The way he’s greeting people in the office, and handling phone calls, and delegating … he doesn’t seem like the type of guy who would spend a lot of time drinking alone at lunch.”

And Mike’s behavior during his imaginary Metro-North commute? Some of the situations on the train are relatable, like how one suspect takes up the seat next to hers with her handbag. This is one of my dad’s major pet peeves. He hates when he can’t find a seat on the Long Island Railroad’s Port Washington train from Little Neck to Penn Station just because some people are too inconsiderate to infer that everybody wants to sit down, especially during rush hour. On the other hand, my dad dismisses the Commuter scene where Mike wades through a dense throng of people just to get to a seat. “On a typical commuter train, there’s not enough space in the aisle to get by. Once people are standing in the aisle, foot traffic stops.”

He quickly comes to his fellow commuters’ defense, though, remembering that his fellow Long Island Railroad (LIRR) commuters once gave him a seat in 2014, after he almost fainted from exhaustion in the aisle of a crowded Port Washington train.

This anecdote is especially striking since my dad generally found Mike to be a nostalgic “throwback” to an imaginary time when commuters were kinder and more accepting of each other. “He’s this white guy living in an affluent suburb. I don’t know if his wife works? I’m not sure. But his wife takes him to the train station. You’d only see that in a suburb years ago. That’s not typical for the types of people you see on trains today.” He adds: “[Mike’s] showing you an aspect of suburban America that was prevalent 40, 50 years ago.”

Mike also reminds my father of “Dashing Dan,” a LIRR mascot that originated in the late ’50s. Dad remembers that Dan was always rushing to catch his train, and was essentially the city’s way of encouraging New Yorkers to take public transportation: “A train is as good as a car,” he paraphrases.

Dashing Dans and Miss Subways were regular presences around New York City’s buses and train back when my dad started commuting in the mid-’60s. He may have grown up in the quintessential Long Island suburbs of Levittown and Roslyn, where driving was residents’ primary means of transportation. But my dad lived everywhere in New York — Park Slope, Astoria, Flushing, and Little Neck — after graduating from Maine’s Colby College. And he’s been taking buses from back when he was a grade-schooler, and he used to visit his grandparents in Brooklyn: My nana drove him to either Hempstead, or Hicksville, the two LIRR stations that were nearest to Levittown. Then he took a LIRR train to Brooklyn’s Atlantic Avenue terminal. Then he hopped on a bus to Flatbush. He would routinely get lost on those old buses. But as usual, my dad turned his mundane life experience lemons into character-building lemonade: “That’s when I learned to ask [the bus driver for] directions before I got on.”

Dad was also struck by the scene where Mike joins a card game that’s already in progress on the train. He remembers when, back in the ’60s, he saw a groups of male commuters playing pinochle on the train. These guys were such regulars that they could leave their pinochle board on the train’s luggage rack, and always find it the next day exactly were they left it. “Maybe because I’m older, but I don’t see that as often,” he says. “Then again, people don’t commute as regularly anymore.”

But what did my dad like about The Commuter? Funnily enough, he singles out the scene where multiple passengers stand up Spartacus-style in order to protect the identity of the character that Mike is tasked with finding (and inevitably killing). He also likes Walt, Jonathan Banks’ supporting character. The name of Banks’ character is probably a reference to Breaking Bad‘s working-class antihero Walter White, which is fitting since Banks is best known as no-nonsense killer Mike on Breaking Bad and Better Call Saul. Dad confesses that he’s always wanted a train buddy like Banks’ Walt, “somebody who’s always cracking wise, and ready with little sardonicisms.”

I remind my dad how Walt ends up in The Commuter: “Oh yeah, that’s the guy who gets hit by a bus!” He pauses. “Yeah. When he gets killed … I was disappointed.” Then he asks me about my day, and our conversation resumes.

When a Disposable Action Flick Is Like Comfort Food