Despite returning to the best-reviewed Terminator film in almost three decades, Dark Fate star Linda Hamilton won’t be back as Sarah Connor. After a quiet box office run of $261 million worldwide for Tim Miller’s Dark Fate, Hamilton isn’t optimistic about her return or this latest Terminator story continuing, even though a trilogy was mapped out in advance.

“I would really appreciate maybe a smaller version, where so many millions are not at stake. Today’s audience is just so unpredictable,” Hamilton tells The Hollywood Reporter. “I can’t tell you how many laymen just go, ‘Well, people don’t go to the movies anymore.’ It should definitely not be such a high-risk financial venture, but I would be quite happy to never return. So no, I am not hopeful, because I would really love to be done.”

As well-received as Dark Fate was — scoring 70 percent and 82 percent among critics and audiences on Rotten Tomatoes — there were a number of die-hard fans who were upset over the film’s opening scene that saw another T-800 Terminator (Arnold Schwarzenegger) gun down John Connor (Edward Furlong) three years after the events of Terminator 2: Judgment Day. But, for Hamilton, it was a necessary story point.

“I don’t think Sarah and John would be there at all if they were still fine and strong. I thought it was a great leaping-off point for my character,” Hamilton explains. “To create a new fuel and fire for Sarah Connor, I thought it was a very good story point. I’m not one that clings to past ideas… I just think it’s much more interesting to launch from a new place.”

In a recent conversation with THR, Hamilton also discusses her bond with co-stars Mackenzie Davis and Natalia Reyes, developing Sarah’s somber backstory and the process of rediscovering Sarah after almost three decades.

I know you don’t buy into a lot of the adjectives that are said about you and Sarah, but the two of you have really set the bar for how multidimensional female characters are written and portrayed in genre cinema. How and when did it first become apparent to you that Sarah had transcended the first two movies?

Within a half a year of Judgement Day‘s release, there was still such a stir about how I looked. At this point, I was going, “Put that down. There was so much else that I did for that part.” (Laughs.) The strength, the build of the body, whatever… had clearly captured the imagination on quite a global level. So that was when I realized that that, at least, was going to linger for a long time. 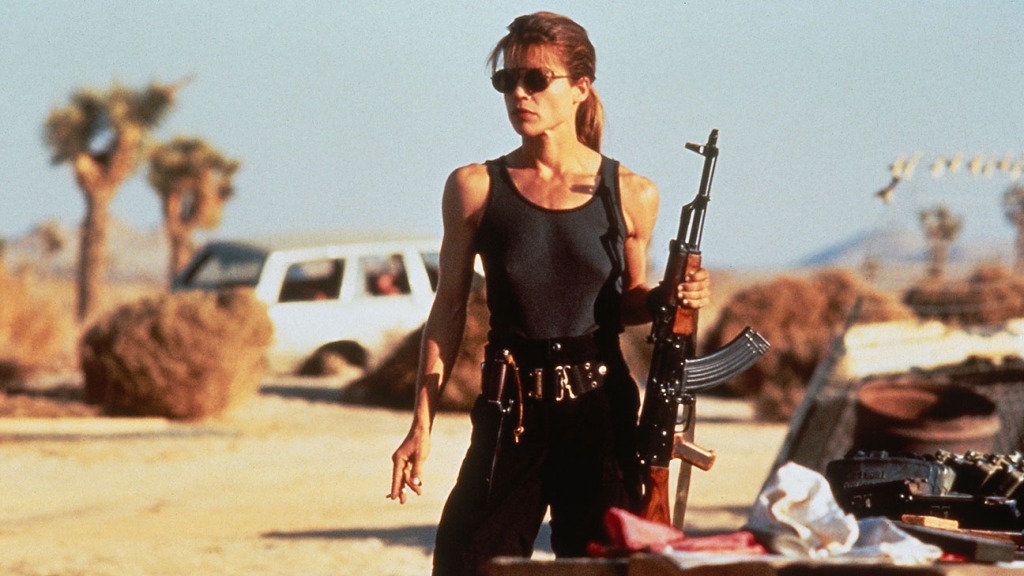 Dark Fate is unique for a genre film because it has three generations of women looking out for each other, and from the behind-the-scenes photos that I’ve seen, it seems like you, Natalia [Reyes] and Mackenzie [Davis] had a genuine bond on set. Was that sisterhood the most valuable takeaway from this experience?

Yes. I’ve never felt as united with my actors that I’ve worked with — ever — until these two ladies. That was a bond forged in fire. (Laughs.) It really took, and we leaned on each other hard. I love them as actors, I love them as ladies and I love them as women that are fierce, intelligent, informed and considerate of the earth. They were just a blessing.

And I think you have to put Tim [Miller] in there too. It was really Tim and the three muses. Tim was very much a part of that relationship. At any given moment, two of us were hugging him, and if there was room for a third… (Laughs.) We were like that, truly. It sounds silly, I know, but we wouldn’t have made it without him. That’s for sure. 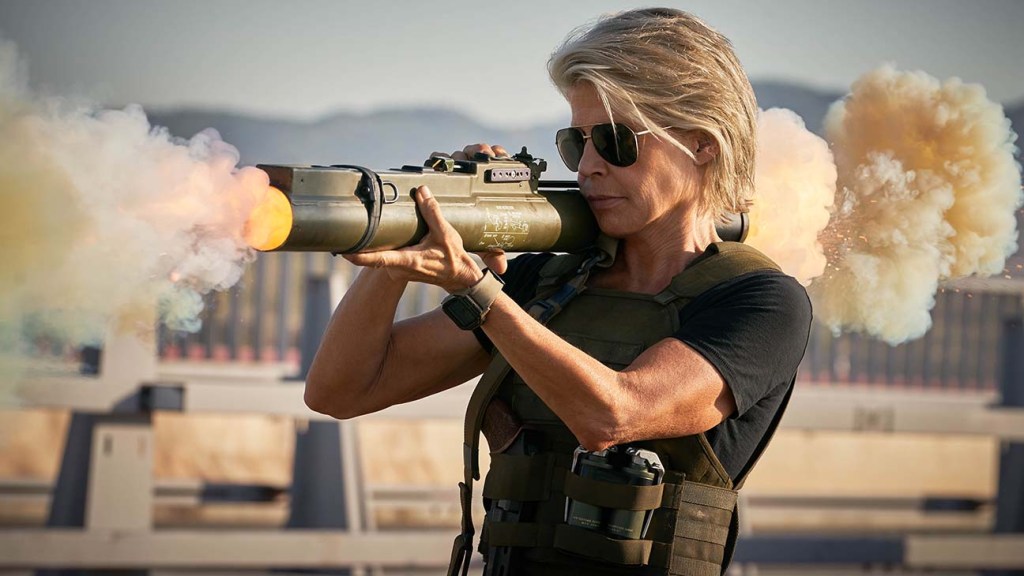 James Cameron’s decision to kill John Connor at the beginning of Dark Fate was very controversial among certain fans, but to me, there really isn’t a movie if Sarah isn’t fueled by her rage and hatred for Terminators. Plus, after five movies with John as a focal point, I think the franchise needed to forge a new path without him. I also tend to believe that Sarah wouldn’t join the new fight if she and John were both alive and well. So where do you stand on the decision to kill John?

That’s a very good point that you just said. I don’t think Sarah and John would be there at all if they were still fine and strong. I thought it was a great leaping-off point for my character. To create a new fuel and fire for Sarah Connor, I thought it was a very good story point. I’m not one that clings to past ideas. Judgment Day is about John, but John wouldn’t exist without Sarah. Then something else will happen, and Sarah will have to die. That is kind of the nature of life, and I would like that to be the nature of franchises, where it’s not just the same story retold each time. I just think it’s much more interesting to launch from a new place.

Once John was killed, Sarah’s life took a pretty dark turn as she hunted Terminators and drank herself to sleep. Given how bleak this backstory is, how deep did you go fleshing out this period of Sarah’s life in order to play her in the present?

I went as deep and as hard as I could with body, mind and spirit for a year before we started. I’ve never gone deeper or darker for so long. I haven’t been acting that much, so a whole year was a luxury to train my body and my mind. While walking my dog, I would figure out Sarah Connor’s walk and go to all of my places of deepest sorrow, regret, guilt and everything that a mother that didn’t protect her son will feel. You have to go there, but I really made sure that I had her locked down before I showed up on set — emotionally.

It did sort of creep into my personality a little bit as we were playing her. That really doesn’t happen, but when you live in such a fierce, dark fighter place, I found myself a couple of times going, “I’m sorry, that’s Sarah Connor coming out.” But when I was taking my first meeting with Skydance, I said to them, “Do you know Mo’Nique in Precious and that scene at the end where her rage comes out in her amazing Oscar-worthy performance? I want that somewhere in this script.” I wanted that level of just bitter truth and rage coming out. I wanted a Mo’Nique moment. So that’s what we were going for. 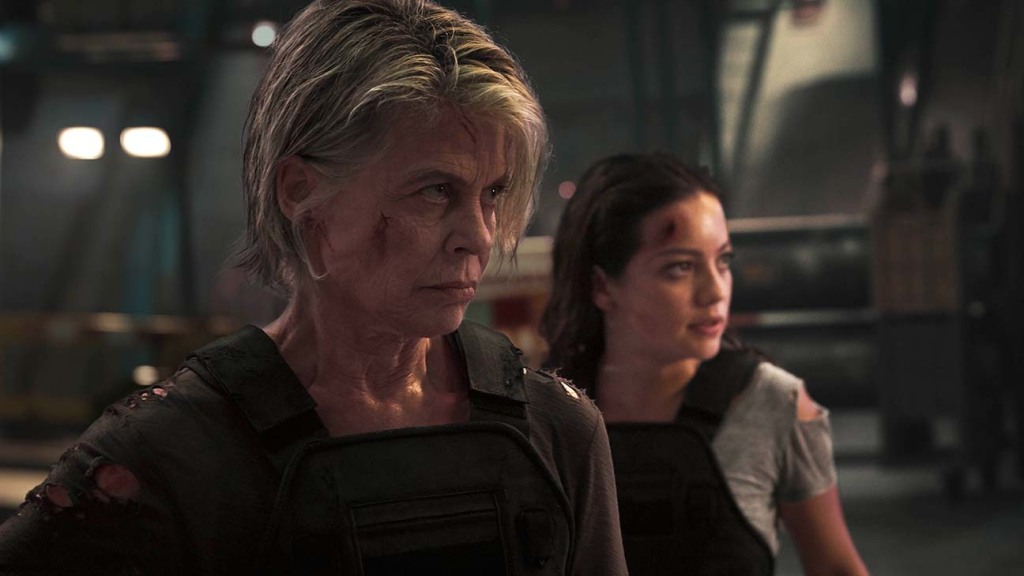 I’ve heard you talk about how the script took a while, especially when it came to figuring out who Sarah was all these years later. To your knowledge, was there ever a point where Sarah sacrificed herself for Dani (Natalia Reyes) and Grace (Mackenzie Davis)?

No, there was no version of that that I ever heard of. It was always Grace being the most human, even though she’s augmented. She was being the real human being in the story with the rest of us having glimpses. The Terminator (Arnold Schwarzenegger) is more human. Sarah Connor has to become more human. But it was always Grace sacrificing herself.

You’ve talked a lot about your reservations in playing the character again after so many years and how you owed her more than anyone else. Was there a specific moment on set when you felt like Sarah again for the first time in years?

It sure wasn’t the first day on set; that was terrible. (Laughs.) My hand was shaking over a closeup of the gun. I was like, “What is going on? This is not Sarah Connor.” So it was not just first-day jitters, as there were so many extenuating circumstances.

I probably first felt like her a couple weeks in, because I had just done so much weapons training, military training, physical training for a year before that, eating nothing that tasted good for a year and doing all of my internal work. So literally the first time I put the costume on for some of our camera tests, I walked out and people were falling down with joy, going, “Oh my God, she’s back.” I had a pretty good blueprint for her by the time I showed up on set.

The Dark Fate reviews were quite positive, as 70 percent of critics and 82 percent of audiences enjoyed the film, according to Rotten Tomatoes. Unfortunately, good reviews don’t always influence the box office. While my fingers are crossed that this story continues, are you at least optimistic about potentially playing Sarah again?

No. Something says to me… I don’t know. I would really appreciate maybe a smaller version, where so many millions are not at stake. Today’s audience is just so unpredictable. I can’t tell you how many laymen just go, “Well, people don’t go to the movies anymore.” That’s not Hollywood analysis; that just comes out of almost everybody’s mouth. It should definitely not be such a high-risk financial venture, but I would be quite happy to never return. So no, I am not hopeful, because I would really love to be done. But if there were something new that really spoke to me, I am a logical person, and I will always consider viable changes.

Terminator: Dark Fate is now available on Blu-ray and digital.