Disney, fresh from finalizing its acquisition of Fox, brings Dumbo to theaters this week. The latest in the studio’s ongoing series of live-action remakes of its animated classics, the movie stars Colin Farrell, Eva Green, Danny DeVito and Michael Keaton under the direction of Tim Burton.

While the film is tracking for a $50 million-plus opening weekend, it is getting mixed reviews from critics, with a 55 percent score on aggregator Rotten Tomatoes and a 55 score on Metacritic.

The story focuses on Dumbo’s relationship with Holt Farrier (Farrell) and his kids, all of whom work for the circus run by Max Medici (DeVito). When Dumbo’s ability to fly is discovered, it attracts the attention of an opportunistic investor (Keaton) who wants to exploit the young elephant’s uniqueness to increase sales.

Here’s how the studio marketed the live-action version.

All we see on the first teaser poster is a rickety wooden wall with a single spotlight offering the shadow of a small elephant, trunk extending up and big ears flopping to the sides. The second poster, released in November at the same time as the second trailer, puts the title elephant front and center, flying toward the camera from the top of a circus tent while the crowd and DeVito are seen in the foreground.

January brought a series of five character posters that offered better looks at some of the major players. A month later, the title character got another poster all to himself with an image showing him looking happy and ready to perform in a circus setting.

Augmented reality posters were placed exclusively in Regal Cinemas locations that, when scanned, unlocked unique images and key art. The Dolby Cinemas poster showed Dumbo at the center of all the other characters, an excited smile on his face. Imax’s poster appropriately focuses on the elephant soaring through the clouds. For Real3D, the poster takes a retro approach, looking like the kind of promotional flyer that might be nailed to a tree in a town where the circus is about to arrive. All three premium formats are included on a one-sheet showing Dumbo leaping over a circus tent.

Disney also shared original posters from various artists, many of which take a minimalist perspective on characters or key moments from the story.

The first teaser trailer (12.8 million views on YouTube) from last June, almost a year ago, is meant to hit all the feels in the audience. A family of circus folk discover Dumbo and take him in. There actually isn’t a lot of the elephant here, save for a few shots of the family loving him and then a quick scene of him flying at the end. Instead the movie is being sold here as a visual spectacle with lots of ornate costumes and scenery that comes from Burton, positioned here as the man behind the first Alice film.

Disney debuted the second trailer (11.7 million views on YouTube) in mid-November during the broadcast of the Country Music Awards on corporate sibling ABC. This one explains more of the story, introducing us to Dumbo and the other members of the circus. When his unusual abilities become clear, he attracts the attention of Vandevere, who wants to make him the centerpiece of a spectacle. There’s a bit of danger and wonder throughout what’s shown here, as Dumbo has to become who he was meant to be with the help of his friends.

Early March brought a sneak peak titled “Prepare for Takeoff” exclusively to Cinemark Theaters that offered a bit of new footage and sold the movie as a big, action-packed dramatic story.

The movie was first officially announced by Disney at its D23 fan convention in 2017. Things went quiet for a while after that, until the studio promoted it to attendees of both CinemaCon and CineEurope in 2018.

Disney released a longform commercial for the movie during the February broadcast of the Grammy Awards. The spot offers a good overview of the story and characters, showing the kinds of adventures Dumbo and his friends will find themselves in the middle of as well as the dangers. Another TV spot focused on the cross-generational appeal the movie has and how beloved the character and story are while another emphasized the grand nature of the story and sweeping visuals.

A short behind-the-scenes featurette from early March focuses on the actors talking about how the story expands on what audiences have seen before and how it sends a message of hope and love that’s needed in our times. Arcade Fire’s update of “Baby Mine” was teased during an episode of ABC’s American Idol at about the same time, with the full video released a week later.

SXSW attendees had the chance to engage with an Accenture-powered interactive poster that used facial recognition to encourage people to mimic a series of expressions modeled by Dumbo on the poster.

Promoted social media posts had some of the movie’s stars encouraging audiences to come out and see the spectacle found in the film. An iMessage sticker pack featuring animated characters was available to download. Along those same lines, Disney created a Sponsored Hashtag on Twitter that put a baby elephant image next to anyone using #Dumbo.

A clip showing Dumbo’s emergence into the circus came shortly after that, followed by a behind-the-scenes featurette with the cast and crew talking about the movie’s visuals and story.

For much of the two months prior to the pic’s release, Disney ran a promotion encouraging social media users to post a selfie of themselves in front of their bookshelves — a “shelfie” — with the company making a book donation to First Book, an educational resources non-profit. Also on the charity front, The Giving Keys created a special “Anything is Possible” pendant necklace inspired by the movie, with the promise that as with all its products, the item was made and packaged by those transitioning from homelessness into the workforce.

The St. Patrick’s Day Parade in Hermosa Beach near Los Angeles featured a Dumbo-themed float and a Dumbo drone that was flown past those enjoying the sun on the beach.

And Spirit Airlines outfitted a plane with the movie’s branding, asking anyone who saw it to post a picture online. DeVito promoted the movie with an appearance on the popular HQ Trivia game show app.

Keaton and DeVito paired up in another video to make sure everyone knew the movie featured a reunion of the two actors with their Batman Returns director as they competed to see who knew Burton best. The filmmaker himself appeared earlier this month at Disneyland to engage with fans, ride the character’s popular ride and more. Burton and members of the cast also showed up at screenings and events in London and Tokyo, along with the official premiere in Los Angeles a couple weeks ago, the latter being sponsored by Accenture and Kleenex. 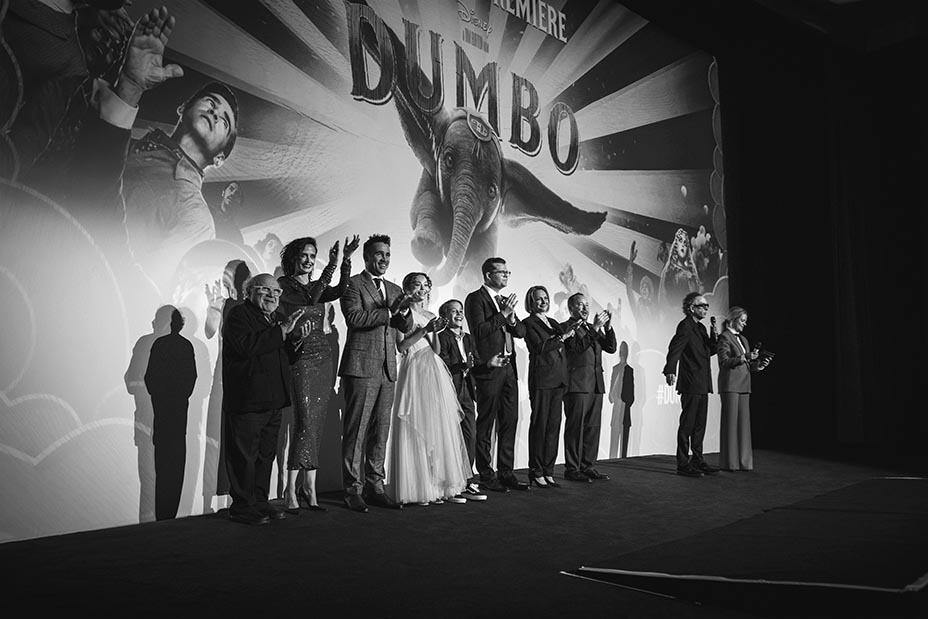 Throughout the campaign, the focus has been on two themes: One, that the movie is filled with amazing visuals and thrills like you’ve never experienced before. Two, that while you know Dumbo and his story, this update offers something new and unique while also being very familiar.

The first point in particular has formed the crux of the campaign. Most every individual element has included mention of how grand the scale of the story is and how singular Burton’s creative vision was to bring it to life. Frequent use of footage, especially in the last few months, showing Dumbo soaring above crowds of circus goers along with dramatic camera sweeps into circus tents all create a sense of majesty, promising audiences an experience that can only be fully appreciated by seeing it on the biggest of screens.

That has meant the story has been moved to the back burner in many ways. The actual story isn’t made clear in much of the campaign. Instead it’s been about the sentimental relationship between Dumbo and his adopted family.