Hugh Jackman is ready to talk about the end of Logan.

Director James Mangold, Jackman and producer Hutch Parker attended a one-night only screening in New York of Logan Noir, the black and white version of the film that will also be available on its Blu-ray release.

The trio participated in Q&A that was broadcast to several theaters around the country, including the Egyptian Theatre in Hollywood, where Heat Vision was lucky enough to snag a sought-after ticket (as well as the limited edition poster given to audience members).

Warning: spoilers below for Logan.

There were plenty of great tidbits discussed during the panel, moderated by MTV’s Josh Horowitz, but the standout  moment was a candid discussion about the ending, which saw Logan (Jackman) sacrifice himself to save his daughter Laura (Dafne Keen).

“Forgive me if I’m wrong, but I don’t think we had decided whether he would die or not?” Jackman asked Mangold about early discussions with how the film should end.

“It was about, I think, earning the right ending. But I think we wanted it to feel over. Meaning, we wanted a sense of a curtain coming down at the end,” said Mangold. “I certainly didn’t want people speculating that we had left a hole open for more moneymaking and bilking and doing. I wanted it to be like, the curtain has come down, we told the story. Just like a regular movie, we’re not leaving something out there. The story is over.”

(For the record, Mangold coyly did answer that an X-23/Laura spinoff could happen, but didn’t offer a timeline.)

Jackman recalled sitting next to co-star Patrick Stewart (Prof. Charles Xavier) at the film’s premiere in Berlin, the first time they’d seen the film. Both actors, who’d been with the franchise more than 17 years, were particularly taken by the film’s final shot — in which Laura takes the cross on Logan’s grave and turns it on its side so it makes an X. 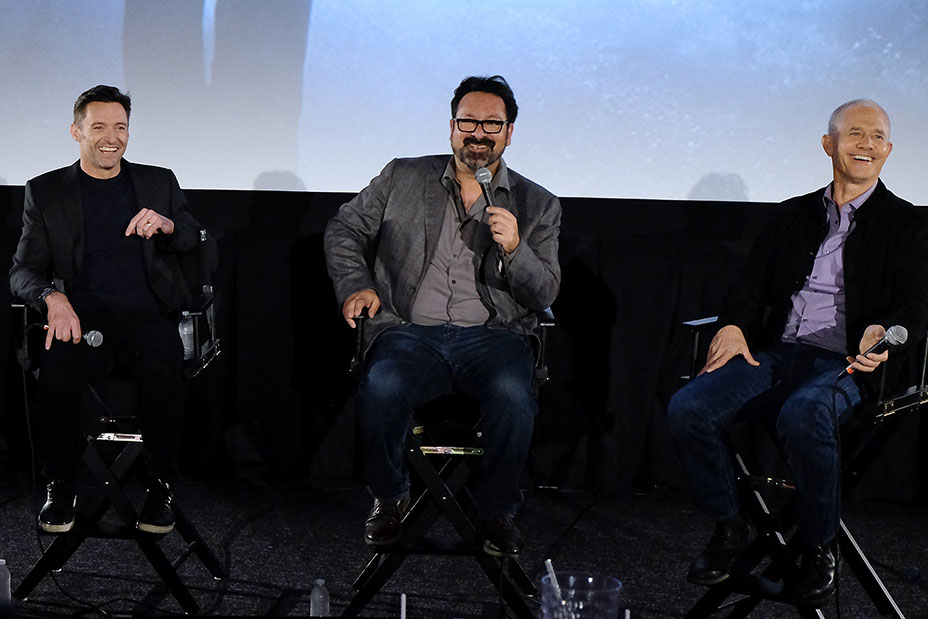 Jackman gave Mangold credit for conceiving of that idea.

“When I read it, I thought ‘that’s beautiful.’ It seemed very poetic on the page. And when I saw it, I cried. I sat next to Patrick Stewart. We saw it for the first time, and both of us wept,” said Jackman.

Jackman said that Stephen Colbert recently told him he’s seen the film three times — and the Late Show host has cried every time when that X came on the screen.

“There’s something so patient and courageous in a filmmaker to allow everything to culminate in that one moment,” said Jackman.

Logan will be released on 4K, Ultra HD and Blu-ray May 23. It is out on Digital HD now. Check out the conversation below:

We’re live with Logan director James Mangold and Hugh Jackman following a special screening of Logan Noir. Get the black & white version of the movie in the Extras. apple.co/Logan