It’s only March, but Logan has already delivered what will likely be the breakout role of the year. In Logan, Dafne Keen’s Laura is both tragic and comic; brutal and heartwarming — and just maybe, the successor to Hugh Jackman’s Wolverine in the X-Men movie universe.

Craig Kyle created the character in 2003 for the animated series X-Men: Evolution, after a Kids WB executive asked if he could make Wolverine a kid (the show featured younger versions of many of the X-Men). The answer was no. But it got Kyle thinking, and he pitched the idea of a young, female Wolverine clone to then-Marvel editor-in-chief Joe Quesada, who loved it.

X-23 soon became a fan favorite on Evolution and also moved to comics. Along with writer Chris Yost and artist Billy Tan, Kyle penned the acclaimed 2006 comic book storyline “Innocence Lost,” which told of Laura’s brutal life raised in a lab where she was trained to be an assassin. The arc served as an inspiration to Logan director James Mangold. Kyle and Yost followed it up with “Target X,” which explored her life after leaving the lab.

At times, the character has generated controversy. Before her launch, fans balked at the idea of a female Wolverine, while others still recall with derision a comic book arc that saw X-23 working as an underage prostitute in the 2003-05 series NYX, which Kyle was not involved in. Recent years have seen her popularity only grow, with Laura taking over the mantle of Wolverine in the comics. Now, with Logan, she’s risen to the next level.

In a conversation with Heat Vision, Kyle shares his Logan spinoff pitch (it’s a dark, with redemption at the end) and discusses why it was a mistake to age Laura up in the comics (“… she was 22 and had a boob job”).

How early did you know Laura would be in Logan?

In 2014, I sat down with James. We had lunch. He had obviously read “Innocence Lost.” At the time, he had not read “Target X,” so I pointed him in that direction. In that first lunch, he said, “The very core of the story, it’s a broken man with an aging and very sick father who discovers he has a daughter that he never knew about.” He had a lot of questions about her. He wanted to know the reasons behind the claw placement. And he actually ended up using that. Patrick Stewart stops Logan in the car and tries to explain the fact that she has her claws that way — and uses the pride of lions as an example. That was both my pitch at lunchtime and in an email later.

What did you think of the final product?

I am so grateful for how he brought her to screen. He has a chance to do what I couldn’t. My pitch to Joe [Quesada] when he said he wanted to put her in a [comic book] title was, “Interview with the Vampire had this great Kirsten Dunst character, who was this young child vampire and she was horrified when she realized she couldn’t age.” To me, the beauty and tragedy of X-23’s continuing story was she leaves the institute when she’s 13. I could have pushed that younger. I could have made it 11. She’s going to continue to grow and mature and evolve, but because they activated her healing factor early, she’s going be trapped in her youthful body for a long time. What I didn’t realize was Joe had a very specific story in mind for NYX.  I didn’t know about NYX. My excitement of having her in a book was all I cared about at that time.

But she was then immediately aged up to 16, and then in Uncanny [X-Men] she was 22 and had a boob job. Those issues are a dark place. I was really hoping we would have a young character, a child, a pre-teen who wasn’t going to be in the dating, the sexuality aspects of the storylines for a long time to come. … It’s just one of those things she’s going to have to carry as she evolves and grows and takes a journey through the Marvel U. But because of the jump in the NYX, that chunk of her storyline couldn’t be told.

Mangold and Dafne both want to do more. What’s your pitch to where this version of X-23 goes next?

We know the kids were created and tested. I’d love to see some of the stories that we told [in the comics], see as much as we can of how she came to be, but then really get into the stories of what she was forced to do and commit. She said she killed people. She said bad people. The bulk of who X-23 and Laura killed in the comic books were bad people, but she did kill some children. She did kill a whole press corps. I think there’s something powerful about watching her go through those horrors without any say and without any ability to not take those actions.

A story I always wanted to tell was, once she’s free and once she’s gone through what she’s gone through, the only way she can have a hope for a future is for her to go back and trace the lives that remained and were harmed by the actions she was forced to commit. You put her on this journey of redemption. She faces the families that lost fathers. The orphans, everyone that was touched by her horrific acts. And she can go through them one by one and face everyone affected by the murders she was forced to commit, if she can get to the end of that road without being killed by those that remain, there’s something on the other side of that. I think it would truly be transformative for the character.

If asked to be involved, would you?

I’d love to be a part of it. I had such an amazing career at Marvel. When I started there were a few of us. There was Avi Arid, my boss Rick Ungar, we had a researcher and a couple of assistants. At the time we were sharing office space with Spectra Star, a kite company that [Marvel Chairman] Ike [Perlmutter] also owned. Those pictures of Hailey [Benton Gates], the original X-23 — one of the guys at the kite company cut me those blades and painted them for me, and I used those for the photo shoot. So I’m very grateful to those guys. 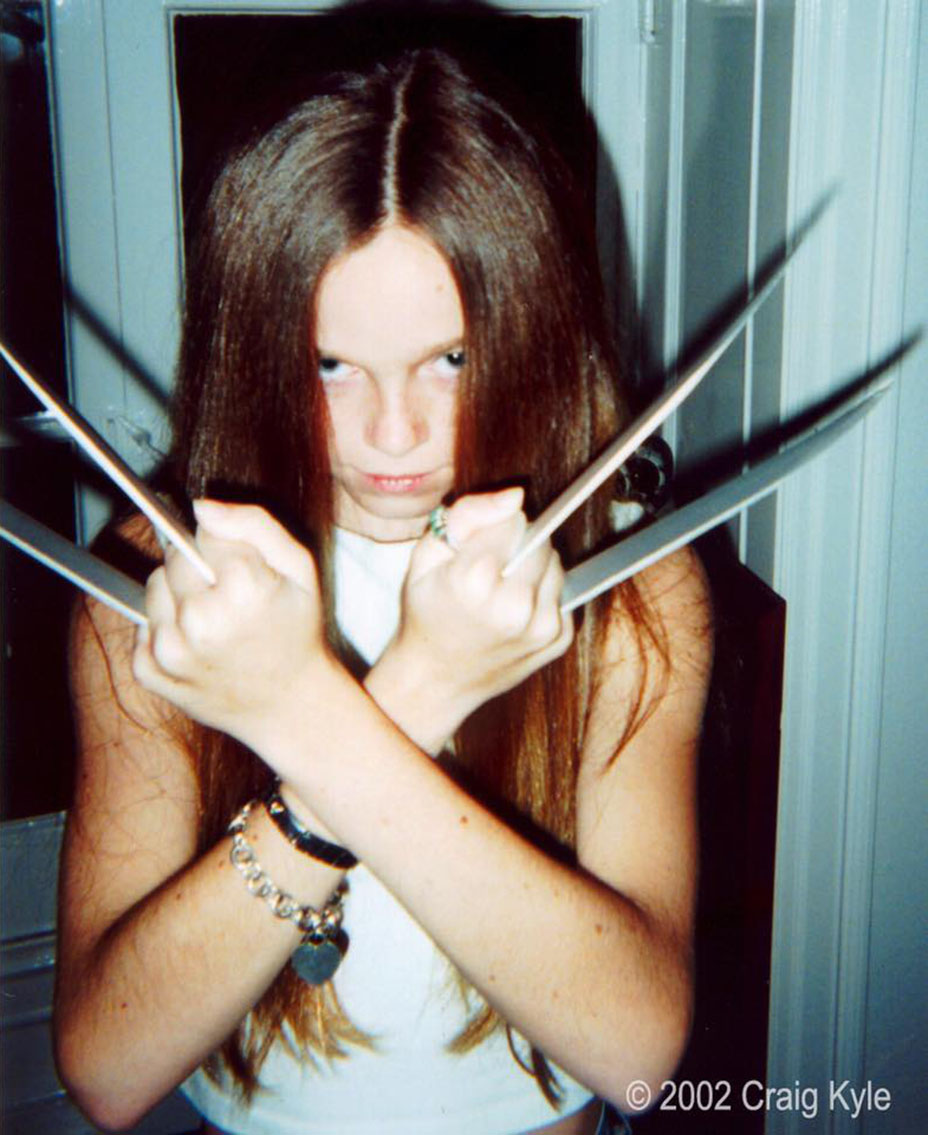 Dafne’s Laura is being hailed as a new kind of female hero. What do you think of that?

Some people are talking about how desperate we are for a good female hero. And man, am I with them. And someone who is not sexualized at all. On X-Men: Evolution, we did one last image that said our show is over. We did a montage of things to come. Sentinels and these dark times to show their journey is continuing. There is a shot of X-23 in the front of the team. Logan is missing, because we are implying he is no longer with the team. She steps into that role. When the costume design came in, it had a big midriff section left. I covered it up. Even back then, I just wanted her to be young and powerful and just rich in character. I wanted people to see what was so wonderful about her and have the sexuality really not be a part of it. With James doing what he’s done, he’s given us a chance to champion her story and love her … without making her a sexpot. I want a hero that my daughter, when she’s old enough to see heads be turned into bologna slices, can get behind of and proud of an excited by. And I think she has a real shot of filling a missing piece. 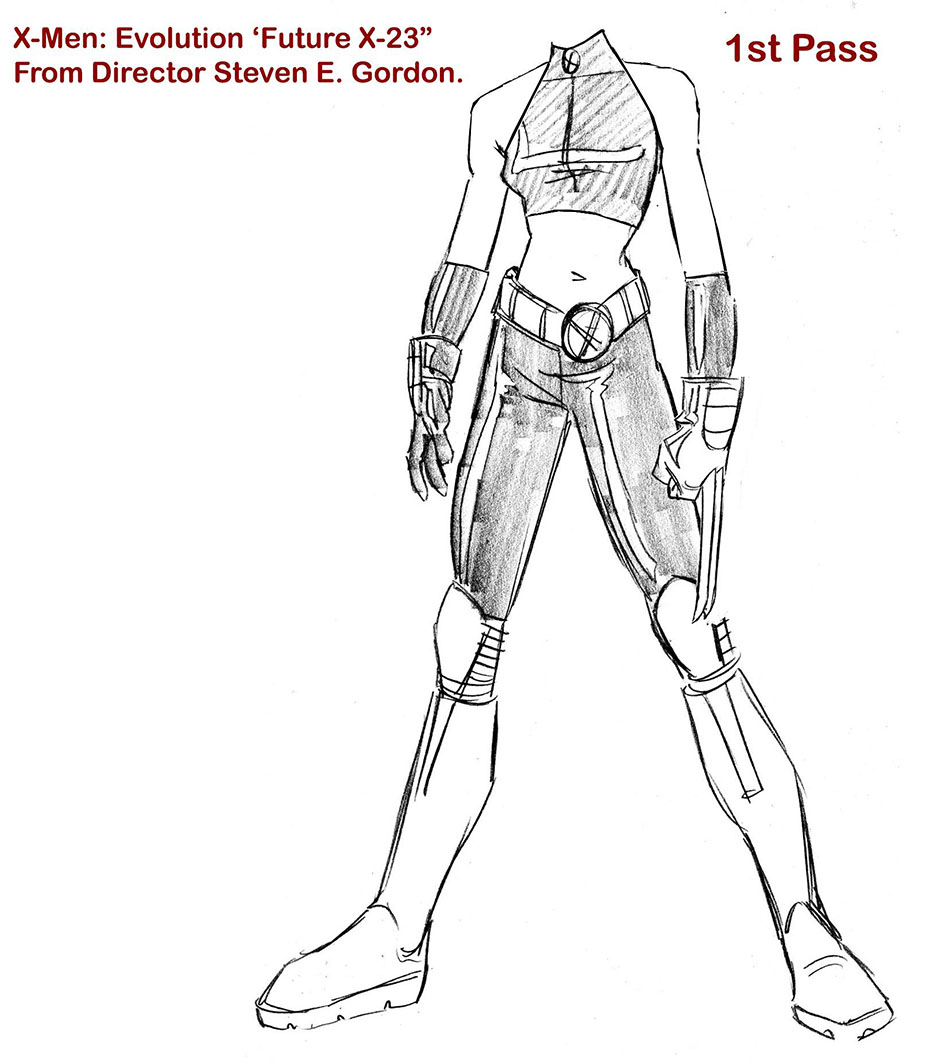 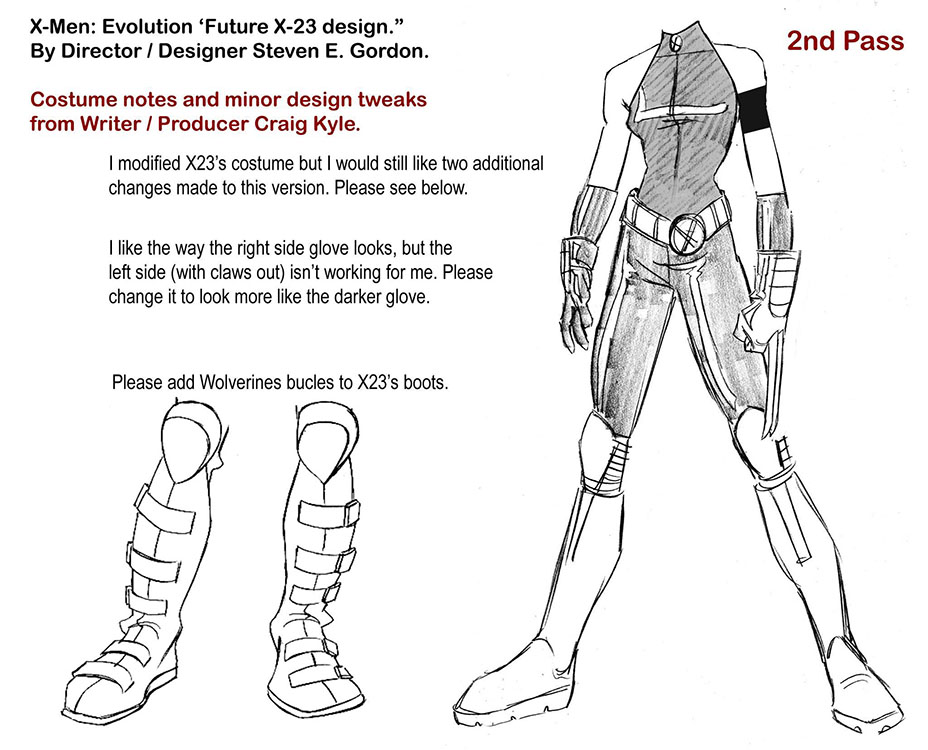 What do you think of Laura taking on the role of Wolverine in the comics?

I was happy when after the “Death of Wolverine” she was going to step into the role. That said, I never wanted her to put on Wolverine’s costume and take his name, because she’s not Wolverine. Wolverine is Wolverine and no one will ever be him. He is this extraordinary, beautiful, perfect thing. I don’t want to take away from him and I don’t want to strip her of her individuality. I love that she’s taken that role. I just wish she could do it in her own costume, that’s all. 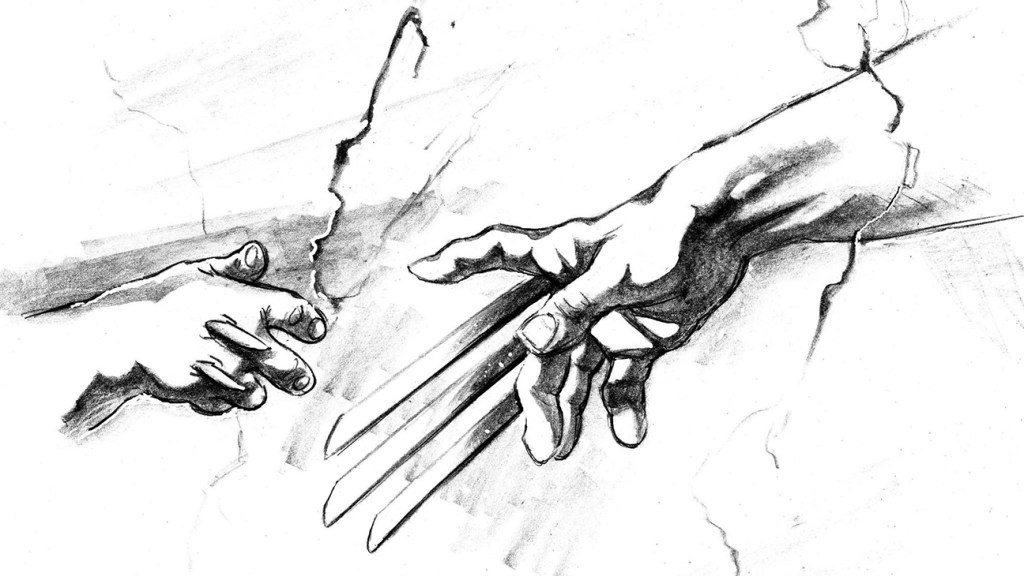