Much of contemporary Hollywood stardom is centered around the idea of being knowable. Now, more than ever before, audiences have the unique ability to pierce the veil of mystique that once made celebrity such a venerated position. Thanks to social media, and the prevalence of increasingly revealing interviews and profiles, there’s a frequent feeling among many captivated audiences and fans that big name performers are familiar, or at least their public personas are. This often leads to a weird sense of intrusive ownership symptomatic of “stan culture,” but there’s often a kind of informal invitation that permits audiences to make assumptions about actors, the projects they’re interested in, the kinds of roles they will or won’t take, and for which preexisting characters they’d be a perfect fit. The component of surprise once afforded to actors like Marlon Brando and Jack Nicholson has become all too infrequent. For this reason, an unknowable quality and the ability to defy expectations, Tom Hardy has emerged as one of the most interesting actors of his generation.

This week not only sees the release of Josh Trank’s Capone, in which Hardy plays the infamous mobster, but also marks the five-year anniversary of George Miller’s masterpiece, Mad Max: Fury Road (2015), starring Hardy as the titular road warrior. Both films provide an opportunity to reflect on Hardy’s filmography, one punctuated by unexpected projects and interesting character choices that frequently find him in the realm of genre film. “There’s an element of danger that’s required to the work,” Tom Hardy said in a 2017 interview with The Hollywood Reporter when asked about the relationship between his public persona and the job he does. This element of danger isn’t simply because Hardy has a penchant for playing dark characters, villains and antiheroes, but because of the way in which he throws himself into a role, with a kind of ego-less abandon.

Hardy’s performance as Alphonse Capone is a perfect example of the kind of danger we’ve come to expect from the actor. It’s a characterization full of grunts, rasps and farts, as the actor takes on the syphilis- and dementia-ridden Capone during the final year of his life. The film, which has received mixed reviews, straddles the line between prestige and pulp, and finds Hardy in his element, taking the Shakespearean pathos befitting a renowned thespian and putting it in a blender with cartoonish comic book villainy. Hardy deconstructs the gangster, creating a dying movie monster surrounded by the statues and bloodshed that represent his better days. There’s an admirability in Hardy’s fearlessness in looking foolish or emasculated. And looking back at his career, it’s these same aspects that have followed Hardy. The actor possesses a willingness to deconstruct the familiar, both in terms of the roles he takes on and his own status as a popular leading man. 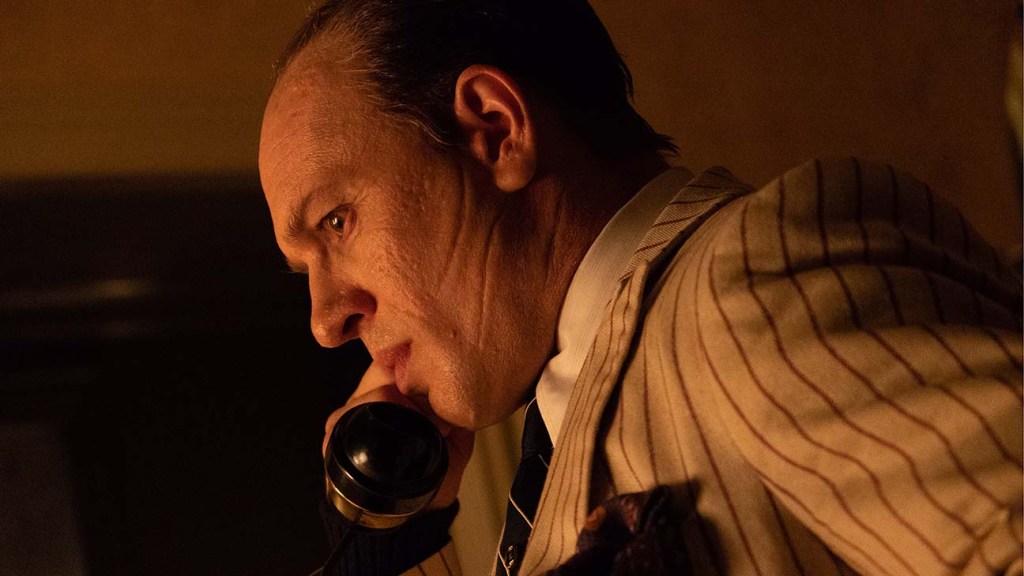 While Hardy first hit the mainstream in Christopher Nolan’s Inception (2010), the actor had been putting in admirable, largely supporting, work on the U.K. indie circuit for years, and first came on my radar in Nicolas Winding Refn’s Bronson (2009), which followed the life of Britain’s most violent criminal through the lens of surrealism and vaudeville theatrics. What’s interesting is despite the list of big-budget films and the Oscar nomination for The Revenant (2015) that have shaped his career over the past decade, the Hardy who covered himself in petroleum jelly as Bronson and the Hardy whose Capone defecates himself, twice, are the same. In the years separating the two performances, there is no sense of an actor who has decided to use his clout to only take certain types of films and only work with specific names. There is no sense of him trying to retain the celebrity of Tom Hardy. In fact, when Hollywood has tried to put him into a box, and package him as a sex-symbol capable of playing an “average guy,” like in the ill-fated rom-com This Means War (2012), which Hardy called a “miserable” experience, the actor has ventured further outside the lines of expectation, taking on film and television projects that have allowed him to break down the seeming boundaries between leading man and character actor.

Looking through his filmography, it becomes clear that Hardy is uninterested in playing average. Even when starring in small dramas like Locke (2013), The Drop (2014), Legend (2015) and awards season fare like Warrior (2011), Tinker Tailor Soldier Spy (2011) and Lawless (2012), the actor has a penchant for playing characters with strange tics, complicated sexuality, and difficult-to-decipher accents. None of these characters feel the same, but they do feel unified by Hardy’s ability to push against the idea that any of them could fit into a “type” and be cast with any number of actors. With Hardy, there’s always going to be something off-kilter, and a bit different from whatever the audience imagined. This has served the actor particularly well when it comes to genre films with fictional characters who already have a fan base and specific expectations for what the character is supposed to be.

Hardy has always carved out a home for himself in genre films, beginning with his Hollywood breakout in Star Trek: Nemesis (2002), in which he played the villain, Shinzon, a clone of Jean-Luc Picard (Patrick Stewart). Even in this early role, Hardy pushes back against expectation, doing little to imitate Stewart’s expressions or mannerisms, instead emerging with his own take that feels both charismatic and unfamiliar. Ten years later and Hardy would hone his ability to play a villain when he took on the role of Bane in Christopher Nolan’s The Dark Knight Rises (2012). With an unforgettable vocal performance, one still prone to well-meaning parody, Hardy took the perceived uber-masculinity of the comic book character and stripped it down, concentrating instead on the aspects of the comics that suggest Bane is a broken child dressed in the trappings of war and revolutions, but hiding a deeply fragile nature, not unlike Bruce Wayne (Christian Bale). As engaging as it was to watch Hardy’s Bane break the bat, the moment in his performance that really sticks out is near the film’s end in which a badly beaten Bane slumps to the floor, wheezing, barely able to form words, and genuine fear in his eyes. This moment of weakness, of humanity, behind a larger-than-life character is a testament to Hardy’s craft and ability to make even his villains pitiable, an aspect he’d return to as John Fitzgerald in The Revenant.

When it came to Mad Max: Fury Road and taking on the character defined for three films by Mel Gibson, Hardy took a similar deconstructive and revealing approach. There’s no imitation of Gibson in his Max, and Hardy doesn’t even attempt an Australian accent, a sticking point for a few fans of the character. There’s a debatable aspect of whether Max is the lead character or if it’s actually Furiosa (Charlize Theron), who receives the majority of the action, emotional beats and lines of dialogue. Even in taking on such an iconic figure as Mad Max, Hardy doesn’t give us the character we expect, but a character that best serves the film. Hardy denies Max a traditional sense of masculinity, best showcased in the scene in which Max offers himself up as a steady foundation for Furiosa to take the shot he couldn’t make. There’s no pedestal upon which the character is placed for Hardy, allowing him to relinquish any need to fulfill expectations beyond those of the film. Even as the title character, Hardy finds his element of danger in essentially becoming a supporting player, a survivor who understands that sometimes the best means of survival is to take a step back.

Search Tom Hardy on Twitter this week and you’ll find a number of accounts puzzled by the actor’s recent career choices, failing to comprehend how the actor has managed to move from working with Christopher Nolan blockbusters to starring in a Marvel franchise (outside of the MCU proper, a bigger deal on Twitter than it is anywhere else), and a VOD project from a filmmaker previously thought to be in “director jail.” In a world where we expect movie stars to have specifically delineated career paths, with the endgame either being playing a superhero or winning an Oscar, Hardy shrinks away from such either-or delineations. Just as the actor was making moves on the prestige circuit, he pursued a role in David Ayer’s Suicide Squad, which he eventually had to drop out of due to scheduling conflicts. This desire to play another comic character, so soon after The Dark Knight Rises, seemed to break all of the alleged rules that come attached to actors these days. Hardy eventually found his next comic book role and broke even more rules in the delightfully retro Venom (2018) in which he played Eddie Brock and his symbiote, Venom. What some fans assumed would be a paycheck role for the actor was instead a passionate display of fandom and an insane performance marked by great physical comedy and vocal work. Tom Hardy may have been in four Oscar-nominated films within the past decade, but there he was, at the height of his career, sitting in a water tank, biting lobsters in half with absolute conviction. What other Oscar-nominated leading man is currently making moves like that in Hollywood?

There’s never any telling where Hardy’s career will lead him, and while so many projects seem dictated by audience desires and fan expectations, Hardy consistently shrugs them off. Even now, while in the midst of gearing up for his next theatrical release, Venom: Let There Be Carnage, the actor is back in the danger zone, trying something new as returning guest on the British children’s series Cbeebies Bedtime Stories. Tom Hardy’s desire to perform work that excites him seems to outweigh any other considerations, and lends itself to a filmography full of constant surprises. Lucky for us, there doesn’t seem to be a genre or format that’s off limits for the actor. While there’s a good chance we’ll see the actor reteam with Nolan, traverse George Miller’s waste lands and battle Spider-Man, it’s equally likely we’ll see him fully invest himself in a project we never saw coming, a reminder of the actor’s rare and elusive nature.