A decade ago, filmmaker Duncan Jones was riding high thanks to Source Code, the 2011 sci-fi movie starring Jake Gyllenhaal that was a critical and commercial success. Jones was in a position to dream up something big for his next project, and he imagined Once Upon a Time in the Future, which would be a sprawling sci-fi film that he hoped would reunite him with his team behind his 2009 cult hit Moon.

Then life took some unexpected turns. Jones’ wife, photographer Rodene Ronquillo, was diagnosed with cancer, upending the couple’s lives. When the two got back to work, Jones ended up spending years making  Warcraft (2016) and then went on to helm Mute (2018). All along the way, that other story stayed in the back of his mind even as it looked less and less likely it’d be funded as a feature film.

Finally, Jones decided a graphic novel might be the best approach, and teamed up with Eisner-nominated writer Alex de Campi, who helped him navigate a medium that was foreign to the filmmaker. The duo ran a successful Kickstarter campaign, raising more than $366,000, which allowed them to bring aboard top artists including Glenn Fabry, Simon Bisley, Duncan Fegredo and Pia Guerra. The result is a stunning, immersive book that in some ways outstrips what is possible to capture on film.

Madi: Once Upon a Time in the Future, available from Z2 Comics, is part of a spiritual trilogy that includes Moon and Mute, and centers on a special-ops veteran whose attempt to survive one last mission ends up with her on the run across the world from everyone she’s ever known. Here, the two writers share their journey.

Duncan, were you in your life when you first sat down to dream up Madi years ago as a potential film?  And Alex, what was capturing your attention as a writer when you wound up joining Duncan on this journey?

DUNCAN JONES: I’d just finished with Source Code, which had been well received, and was eager to work with many of my team from Moon and make a new, bigger original sci-fi. MRC had been inviting directors to work with them doing exactly that; making mid-budget, commercial passion projects.  Seemed like a perfect fit so I started to write Once Upon a Time in the Future with them and it was just… big!  I mean, it was GREAT. MRC knew that, but mid-budget it was not. So we started working out what could be scaled down and life hit my family like a bus. My wife was diagnosed with cancer. Everything kind of stopped, and by the time we were ready to get back to work, Warcraft popped up. Madi would have to wait. And then more life happened, and deaths, and kids being born… it was white-water living.  Rapids. When everything eventually settled, I needed to stay at home, and decided that if I was going to work from home, maybe Madi could be done as a graphic novel. So I began to investigate how it might be done…

ALEX DE CAMPI: I’d always really loved Duncan’s work. And one of the things I enjoy most about comics as a medium is collaborating with other people. Being a writer can be very isolating, and I had spent the previous few years getting big, ambitious projects off the ground. Honestly, it was nice to just dig into someone else’s project, have it not be all on me. And Duncan’s a very generous collaborator; everything was about telling the best story we could. Plus, it was a lot of fun playing around in sci-fi, which is a genre I love but don’t tend to write very much. 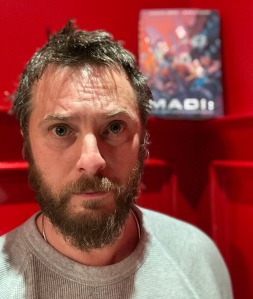 Crowdfunding seems to be a great option for ambitious comics like this. What can you accomplish with crowdfunding that you can’t with a more traditional development process?

JONES: I was initially unsure. I had seen people with varying degrees of success and public profiles going that route and being torn apart for hedging on public money to make their projects. I had already decided I would pay for the book myself up front, which was nerve-wracking, cause it ain’t cheap, but Alex explained how we could use Kickstarter essentially as a shop front and publicity hub, and that I could get behind. It wasn’t long into things that Covid crept up and made the decision to go that route infinity better than any other way we could have done it. Fate smiling on us, there.

DE CAMPI: Honestly? There’s almost nowhere to publish a really ambitious adult graphic novel project that’s going to give your artists a living page rate and allow you to retain all secondary rights. There just isn’t. Everything’s either a closet IP farm or has almost no advance or, in some fun cases, both. There’s a huge gap in the publishing market for the audience that’s coming out of all those middle grade and YA graphic novels into adulthood, and the only place you can make that book right now and pay your people and keep your rights is via Kickstarter —  and even then, only if you’re a fairly big name already. It’s not for everyone; I really enjoy Kickstarter, and engaging with our readers and fans, but I can’t imagine someone like Ed Brubaker doing it, for example. And sure, I’d prefer to just have a generous three-book deal from a trade publisher’s (nonexistent) adult graphic novels department and then just retire, Salinger-esque, to my home to write them — managing the Kickstarter takes a ton of time away from actually writing books, let’s be clear — but alas.

The notion of parenting plays into Moon, Mute and Madi. Though I imagine you both were far more prepared for parenthood than Madi, could you relate to the struggles of caring for a child, particularly as balance your demanding work lives?

JONES: Oh boy… My son, Stenton, came to Berlin with us when we shot Mute. He was two months old. My wife, brave as anyone I know, was determined to face it as an adventure, but he was our first kid. It was a crazy thing to do, but we had fled L.A. after my wife beat her cancer and had gone off to make Warcraft, and that trip had been a hugely beneficial escape for her, from what had been an exceedingly painful year. I was able to make sure she had a job on the Warcraft shoot. BTS stills photographer, and the distraction of the job and opportunity to explore everything, had been a huge tonic for her.  But then my dad got ill as Warcraft was editing and died before the film came out — Mute was hard.  The tonic in that case had been meant for me.  We went from my wife’s cancer treatment into Warcraft, dad getting ill and dying, my son being born, and then straight into Mute to keep me sane.  It was all 100 miles an hour.

And when we got home from Mute and the reviews were so harsh, I still believe undeservedly, well, I just had to stop. We had our daughter.  I took on no work. And when I was eventually ready, I started to putter about with an old flame… with Madi.

DE CAMPI: Whew, as a single mom with basically at least two jobs at any given time? Yes, very much.

I’m not very familiar with the U.K. system but in the U.S., debt — especially student loans — is such a problem and topic of debate. How did the idea to merge mercenaries and debt come about?

JONES: I had a few elements I wanted to tie together right from the start. I knew these two sisters from England growing up, who were my models for Madi and her older sister Rhonna. The older one infallible. A mother hen to anyone in her vicinity, and her sister, a little aimless, looking for danger. Always getting in trouble the older one would have to dig her out of. So there was that… then on the tech side, I had read a number of articles about the new generation machine brain interfaces that was allowing humans to remote control bugs.  Cockroaches… moths. I wondered if you could do it to a human, and why you would? Who would agree to it and to what purpose. That’s where teleoperation of a special forces military unit came to mind. Get an operator behind enemy lines and then have an expert do whatever needs to be done in situ. A medical operation on someone in hiding, hacking a closed system. Whatever reason there might be… and then I started thinking about what happens to tech as it ages out of use, what the military does with dated tech, and how that would be applicable to veterans with tech in them… I’ve lived in the US long enough to know how healthcare works here, even for vets.

I miss the feeling of going to a movie theater. Reading Madi was one of the more immersive storytelling experiences I’ve had in a year (more so than watching a movie at home, even). As cool as it would’ve been to see a Madi feature, does it feel like that intimacy may have been even better in this format?

JONES: Maybe so. It would have been a different thing. Alex is right to say we certainly leaned into the unique story-telling strengths and opportunities of telling Madi in this medium.  And I’ve loved it!  Seeing new pages turn up in your inbox from his Parthenon of the pencil… a bucket list experience.  Though I hope I get to do it again.  There was a serenity working this way that I really enjoyed. 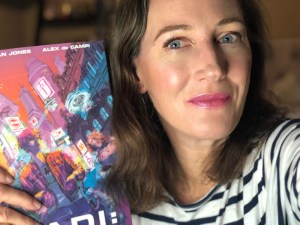 DE CAMPI: One of the things we really tried to do while scripting the book was do things we couldn’t possibly do in a filmed version in terms of specifically graphic-novel storytelling techniques. A graphic novel is also naturally a more intimate form of escapism, because in it, the reader has control of time — vs. in a film, where the director has control of time. A three-minute scene in a film is always three minutes (unless it’s that scene in Basic Instinct, on the VHS you stole from Blockbuster when you were 14). With a graphic novel, you can look at a page for 30 seconds or three hours. You can go back, or you can go forwards. And the way I script and the artist draws can influence how much time you spend on the page, where your eye goes, how fast you tend to read it — but ultimately you and only you control the clock as you read.

This has some of the best comic art I’ve seen in a long time. Has this raised the bar in terms of what you think is possible for both of your storytelling ambitions?

JONES: Ooooh yeah!  Also got me thinking about animation. More J-Squad stories?  What happens next?  So many things to be done, stories to be told.  Just need to buckle down and tell them.  Maybe from home.

DE CAMPI: Oof, I certainly crossed some names off my wish list of collaborators with this book, it must be said. For me, though, every book raises the bar. Every book, I think “well I have to make it better than the one before or why am I doing this.” I’m most conscious of that with Madi with my lettering; I think my lettering in the book is some of the most elegant I’ve ever done.

Have you talked about future collaborations? 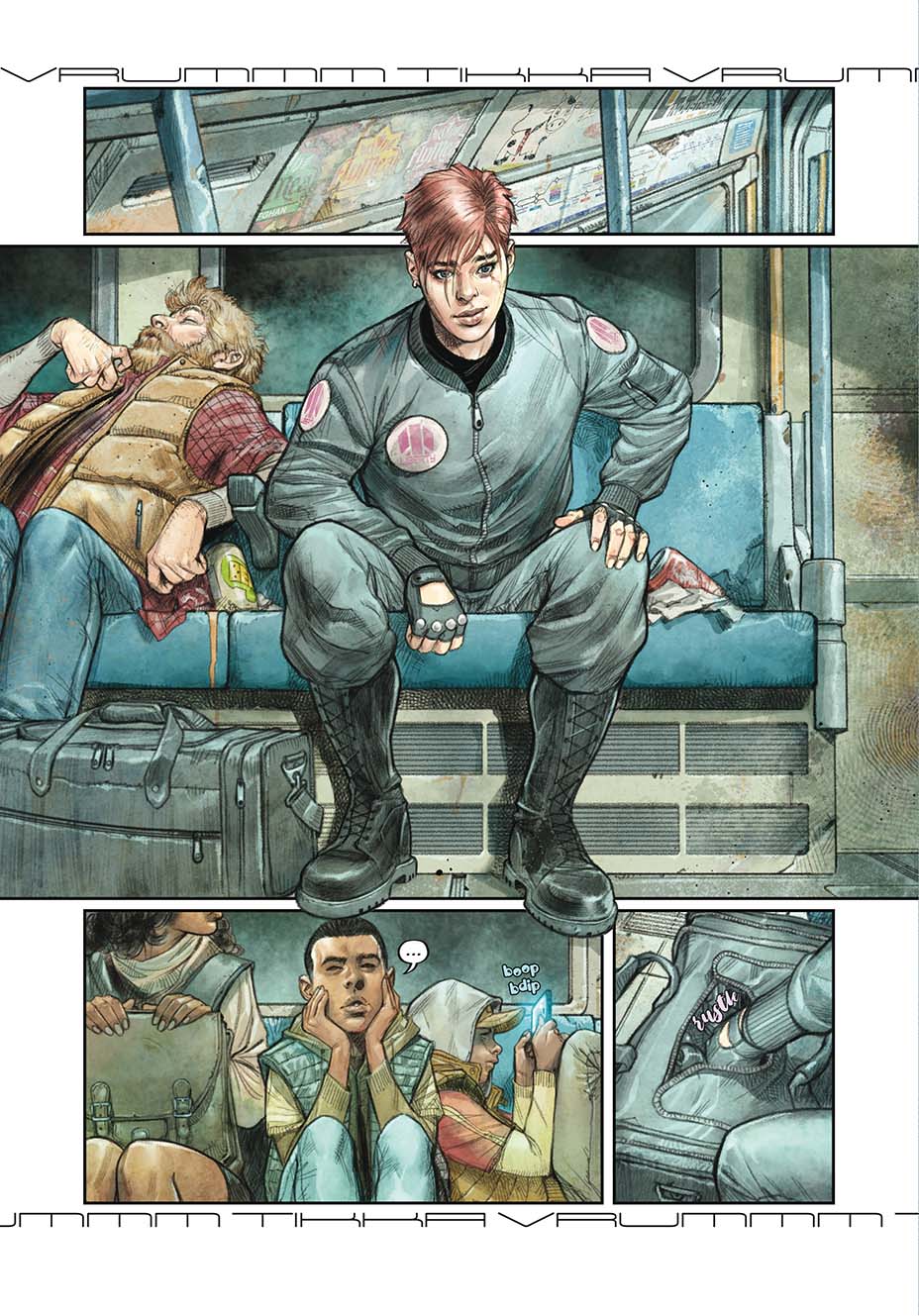