Continue to The Hollywood Reporter SKIP AD
You will be redirected back to your article in seconds
Skip to main content
September 28, 2020 8:00am
Logo text

Games publisher Wizards of the Coast on Monday revealed that long-running strategy game Magic the Gathering is crossing over with AMC’s The Walking Dead for a limited-edition set.

Launching on Oct. 4 to coincide with AMC’s premiere of The Walking Dead: World Beyond, the set will include premium cards that depict iconic characters in the postapocalyptic zombie series, offer unique gameplay and showcase the work of a variety of artists.

“Each of the cards have mechanics that are inspired by either the characters or the elements of The Walking Dead universe that they represent,” Clayton Neuman, vp games and entertainment at AMC Networks, tells The Hollywood Reporter. “And these mechanics are brand new to the world of Magic.”

He goes on to say that while the show obviously takes place in a postapocalyptic world, it has always been about the characters — and therefore the cards focus on the attributes of the characters that they are representing. “With each of the cards in the box, we really took the time to think about what is unique about the characters and how that can translate to a mechanic, when playing Magic, that makes sense, that would be a challenge for players.”

Wizards of the Coast product architect Mark Heggen, who previously worked on the Godzilla and My Little Pony crossovers, adds, “This is the first time that we’re going all the way and designing new cards from the ground up to express outside characters and narrative worlds into the form of Magic cards.”

The preview card of Michonne (portrayed by Danai Gurira in The Walking Dead) below is illustrated by Croatian artist Romana Kendelic, whose portfolio includes many card and board games such as Arkham Horror, Star Wars: The Card Game, Lord of the Rings: The Card Game and Call of Cthulhu LCG.

Heggen says that the team decided to highlight Michonne’s qualities of being a “lone, unstoppable samurai” armed with an iconic survival maneuver in which she uses two walkers to help her stay alive. “That’s the story we want to tell with this card,” says Heggen, who used to work at AMC and has long been a fan of the show. “It’s a really fun way of using mechanics to express these characters in a way that’s really satisfying,” he says.

He goes on to describe Michonne’s ability, when she’s equipped (i.e., she has a weapon), to force an opponent to block her. “So basically she’s able to pick a fight; they can’t ignore her, they can’t get out of the way.”

Throughout the development process, Heggen says, the art direction team focused on creating the look and feel of a Magic card, while representing something that isn’t normally done in the game, which is to show off likenesses of real humans. “We wanted this Michonne to look like the Michonne that people see.”

Neuman recalls that art director Tom Jenkot wanted to pick an artist whose work had an airbrush quality, “because he thought that it really brought out the beauty in the rough around the edges characters.”

The Walking Dead Secret Lair will be available for preorder Oct. 4. View an exclusive preview card below. 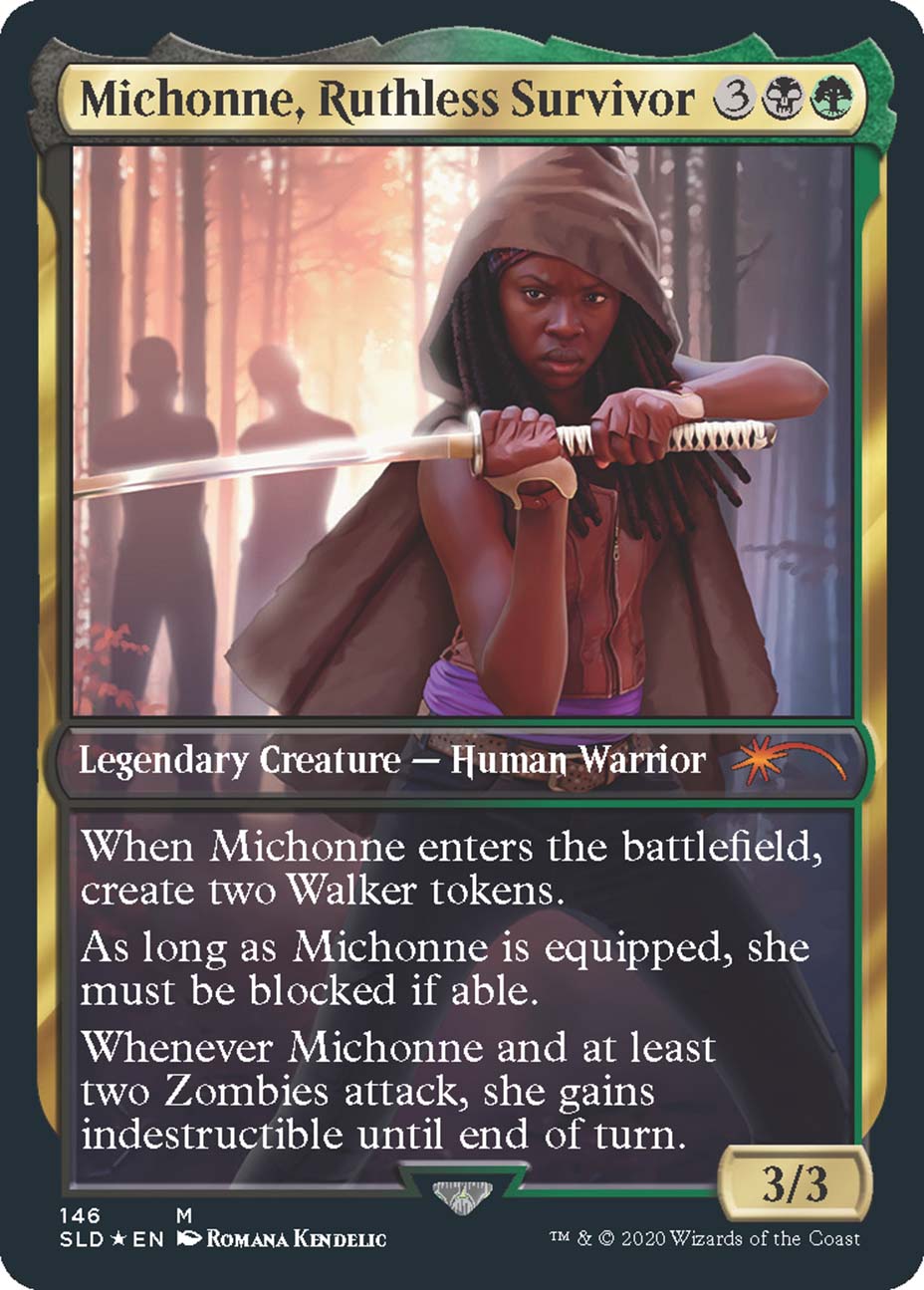