It was the last day of shooting on Another Round and things were just about perfect.

Director Thomas Vinterberg was setting up the scene at the local high school where his daughter Ida attended classes. The whole crew had come out to watch Mads Mikkelsen, who plays Martin, a high school history teacher in a midlife crisis — his job is uninspiring, his marriage is on the rocks — who confronts his disillusion and despair with a surprisingly sophisticated approach to day drinking.

Many of Ida’s friends were there, some playing extras. The sun was shining. It was almost exactly as Vinterberg had imagined it.

After the experience of making two English-language films — the Fox Searchlight-produced 2015 adaptation of Far From the Madding Crowd and the 2018 submarine thriller The Command — the Danish director wanted to get back to his roots. Another Round was set in the neighborhood in Copenhagen where Vinterberg lives. The cast and crew were people he had known and worked with for decades. Alongside Mikkelsen were Vinterberg regulars Thomas Bo Larsen, Magnus Millang and Lars Ranthe, playing Martin’s fellow teachers, all similarly disillusioned middle-aged men who take inspiration from real-life Norwegian author and psychiatrist Finn Skarderud, who suggested humanity would be better off — happier, more creative, more outgoing — if everyone were a little bit drunk. At all times. The quartet put his theory into practice with results at turns hilarious and tragic. 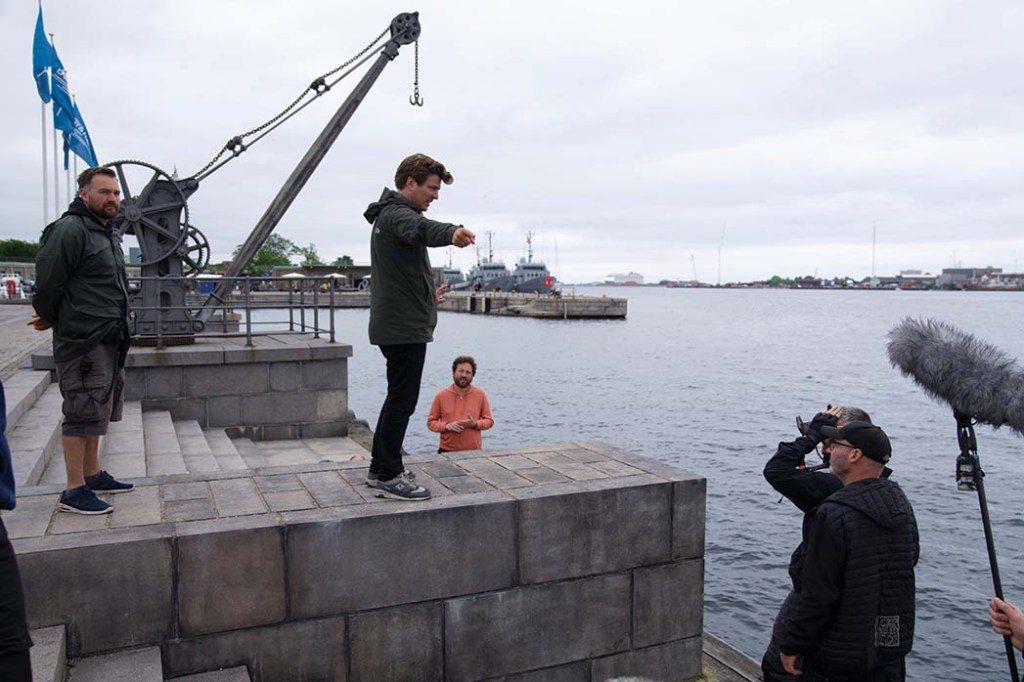 “We talked about making a film about Danish alcohol culture, because it is something very unique,” says Another Round co-writer Tobias Lindholm. “Danes look at America and we don’t understand why you should have the right to carry arms. But if we outlawed alcohol, well, there’d be a revolution.”

Stylistically, Vinterberg wanted Another Round to reflect the bare-bones realism he pioneered with Dogme 95 — the back-to-basics film “manifesto” he authored with Danish director Lars von Trier a quarter-century ago — which eschews special effects, costumes and fancy cinema tricks in favor of handheld cameras and natural lighting, putting the focus on emotionally raw and authentic performances. 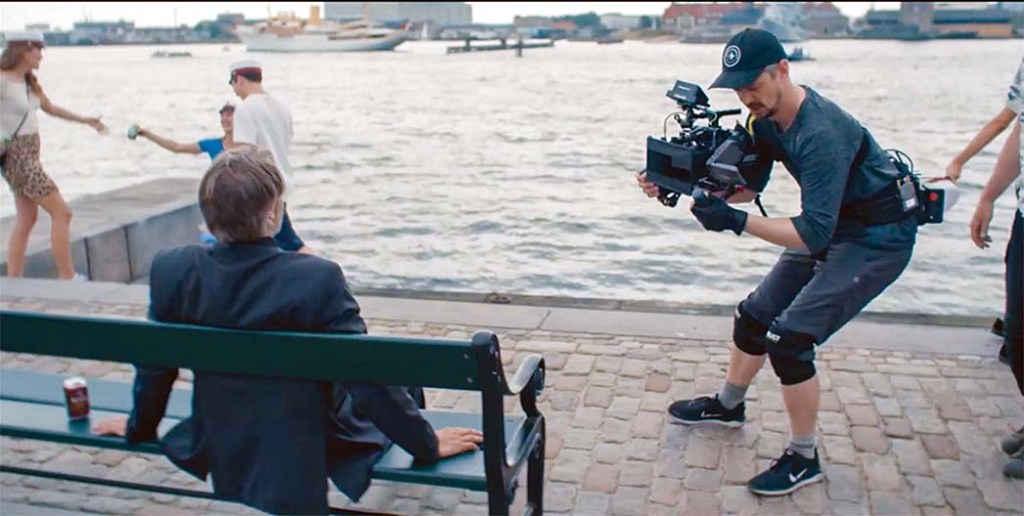 Vinterberg even cast his daughter Ida in a supporting role, playing alongside Mikkelsen as Martin’s concerned teen.

Everything was in place on that final day of shooting, a beautiful summer morning back in 2019. Everything except Ida Vinterberg. Four days into the shoot for Another Round, Vinterberg had received a call. His ex-wife had been driving Ida to Paris to meet up with some friends. There’d been an accident. A man talking on his phone slammed into their car. Ida was killed instantly. She was 19.

Production on the film stopped immediately.

“We shut everything down. The movie was the last thing on our minds. We just tried to figure out how to help Thomas,” recalls Another Round producer Kasper Dissing.

In the midst of his grief, Vinterberg imagined what Ida would think about the film being stopped because of her death. “We were very close, and she was my confidant. We told each other everything,” he says.

Weeks before production began, Ida was on a trip to Africa when Vinterberg sent her the final version of the script. “She wrote me a letter, sending her unconditional love for the project. She said she felt seen by it, that it described her country in the most loving manner, and she told me never to doubt myself as an artist ever again,” he remembers. “Those were big words. That letter was on my mind when I made the decision to carry on.” 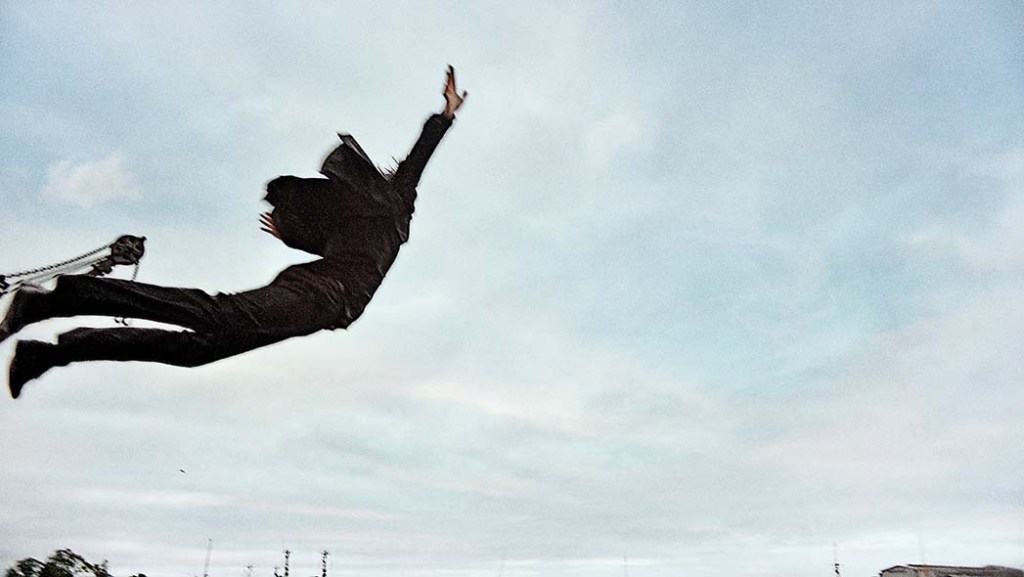 After Ida’s funeral, Another Round restarted production. Initially, co-writer Lindholm stepped in to handle directing until Vinterberg felt able to resume work.

“Thomas told me, ‘Either I can lie in a fetal position for 24 hours or I can spend 12 hours in a fetal position and work the other 12,’ ” recalls Mikkelsen. “The four main actors, we sat down and we agreed we would support him. Together, we’d make this movie as a tribute to Ida.”

The result, which has been nominated for two Oscars, for best international feature and best director for Vinterberg, is a touching black comedy that celebrates life in all its messy glory. Mikkelsen gives one of his best performances in years as Martin — a man on the edge of despair who finds a way back. A drunk dancing sequence in the middle of the movie, at a stage when the four men decide to take their day drinking “to the next level,” is both uncomfortable — things are obviously getting out of hand — and full of joy. 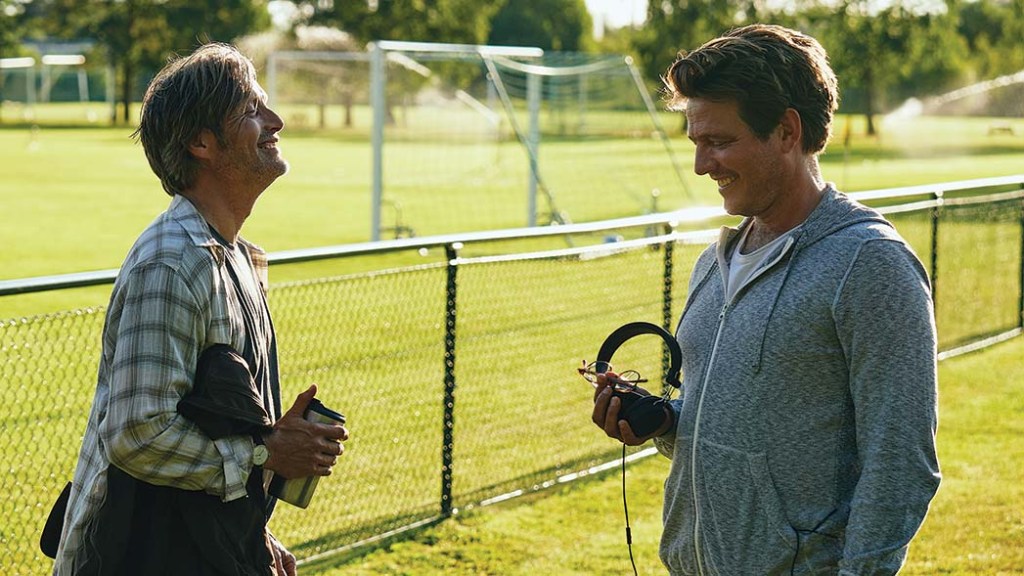 “If you are laughing watching it, I think it’s probably because those four guys tried really hard to make their director laugh at a moment in time when he didn’t think it was possible,” says Vinterberg.

Lindholm says finding the balance between the light and the dark — making a movie about alcohol excess that wasn’t The Hangover or Leaving Las Vegas — was the hardest part of the writing process. Passing pages back and forth with Vinterberg, the script shifted from straight comedy to kitchen sink drama and back again.

“Our early drafts were very funny, very entertaining. But we promised each other total honesty. If we want to show the positive sides of alcohol, we have to be honest about the negative consequences of alcohol,” says Lindholm. “So we’d go in a more socially realistic direction.”

Adds Vinterberg, “But every time we’d clean it up, sober up the story, we’d kill it. Eventually we realized we had to keep the script untamed. To go on this wild, bumpy ride, rather than making a straight drama or straight comedy.”

For co-star Larsen, a recovering alcoholic now seven years sober, that combination was exactly the appeal. “It shows the dark side of alcohol, but it was also honest about the euphoria you get when drinking,” he says. “My friends in AA loved it because it wasn’t finger-wagging.”

But getting four actors to deliver an honest depiction of extreme intoxication was no easy task. 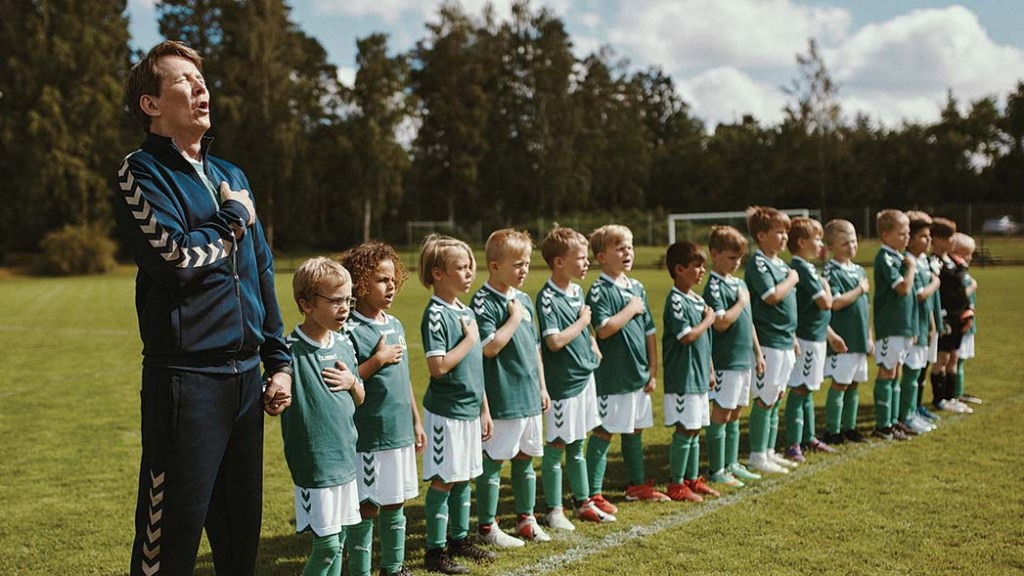 “Playing slightly drunk? That’s easy. But playing really, really drunk? Then you’re into the Chaplin area — bumping into things, falling over,” says Ranthe, who plays music teacher Peter in the film. “It’s really fucking difficult to give a realistic performance that doesn’t tip into slapstick.”

Vinterberg had his actors watch videos of marathon drinking sessions on YouTube. “The Russians were the best; it’s insane how drunk they get,” says Mikkelsen, still awestruck. “That inspired us.” Mikkelsen, Ranthe and Millang also did a week of “drunk boot camp,” testing different levels of intoxication with Vinterberg filming their decline. “There’s a whole science to the different levels of being drunk,” says Millang. “What happens with your language, with your movements, is completely different when you have a blood alcohol level of 0.05 compared to 0.08 or 0.10.”

There was no drinking on set — “We decided to do the mature thing and actually act,” notes Mikkelsen — but the training broke down barriers of embarrassment and ego. “It was a big part of getting us to throw away our angst and anxieties and just go for it,” says Ranthe. “Especially after the accident, we all thought: ‘We have to be courageous and go as far as we can, for Thomas. And for Ida too.’ “

Notes Vinterberg, “All our barriers came down. Both myself and the actors, we lost our filters.”

With a four-and-a-half-hour rough cut assembled by Laura Skiöld Osterud and Tanya Fallenius, co-editors Anne Osterud (Laura’s mother) and Janus Billeskov Jansen worked with the director to find the balance between drama and comedy. They experimented with tempo, speeding up scenes to emphasize the characters’ glorious intoxication, slowing things down when events take a darker turn. The first time Martin slips into the school toilets for a midday drink — a scene that could have played as deeply tragic — was given a lighter spin when Osterud added an onscreen blood alcohol meter that ticked up with the first sneaky sip.

The handheld lensing from cinematographer Sturla Brandth Grovlen also helped reflect the mood of the characters, balancing calm with chaos in the first (sober) scenes of Martin in the classroom — Grovlen’s camera trembles, uneasy in its skin. After a few drinks, as the alcohol smooths out the sharp edges around Martin’s life, the camera movement becomes freer, more fluid.

“I shot on a Alexa Mini, which is very lightweight. I don’t have to have the camera on my shoulder, I can hold it in front of my body, I can stand on my toes or squat down,” says Grovlen. “Thomas lit everything 360 so I could point the camera wherever I wanted. I had complete freedom.”

Martin’s liberation comes in the film’s final scene. The excesses of the drinking experiment have ended in tragedy and death. Martin is at a low ebb, but with a glimmer of hope: He’s received text messages from his wife that hint they could reunite. As the teachers are sharing a final toast in honor of the departed, their graduating students pass them outside at the harbor, dancing and celebrating as the song “What a Life,” by the Danish band Scarlet Pleasure, plays. The teachers rush out and Martin, who we’ve been told took jazz ballet lessons in his past, is goaded into joining the dance. At first, his movement is uncertain, tentative. He stops halfway through to sit down and check his phone, take another sip of beer. Then he’s up again and there’s no stopping him. Mikkelsen, 55, who was once a professional dancer, throws himself into it, leaping over benches, sliding across the cobblestones. It’s clear this dance is Martin seeing a second chance, and he intends to seize it.

“The dance was always in the screenplay, but I didn’t know how we were going to pull it off, in a realistic film, to have such a magical dance number,” says Lindholm.

“How can we keep it from becoming some kitsch Bollywood scene? That was the question,” notes Vinterberg. “Both Tobias and Mads were very hesitant.” 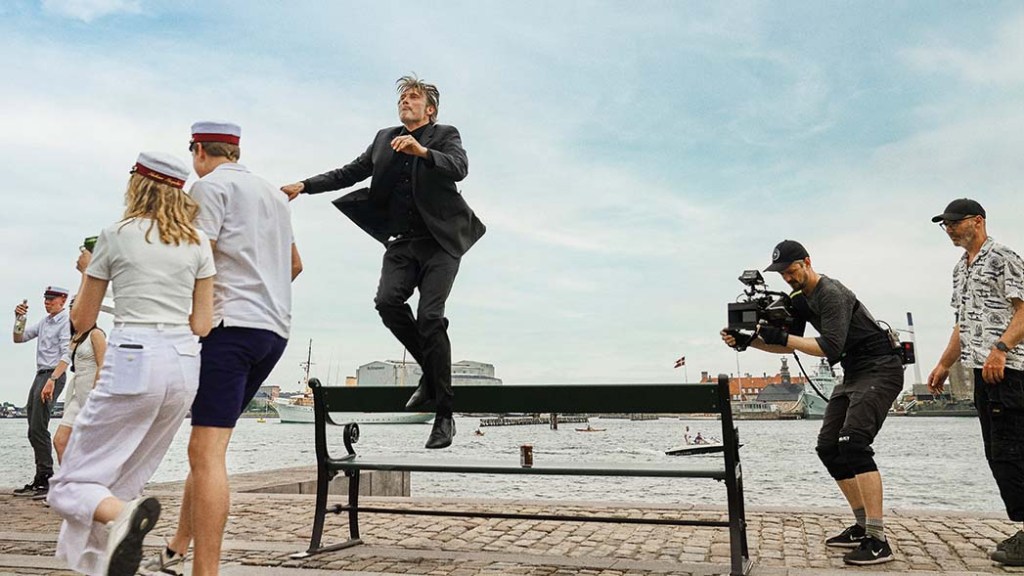 Mikkelsen recalls, “I didn’t want it to come across as pretentious. But Thomas was adamant. He showed me the letter his daughter wrote — this was before the accident — where she said she couldn’t wait to see me dance. So that settled that.”

Mikkelsen, Vinterberg and choreographer Olivia Anselmo designed a dance that mirrored Martin’s story. “He’s nervous at first, he’s scared to start,” says Vinterberg. “After a few steps, he retreats and sits down. Then he goes to his friends and starts again. Finally, he surrenders. It becomes a moment of ecstasy.”

“We shot the dance over two days, with no body doubles, no camera tricks. Everything you see is Mads,” notes producer Dissing. Recalls cinematographer Grovlen, “The whole time, I was worried about his slick costume shoes on the wet cobblestones. But Mads is such a great dancer. It was a gift. We didn’t need any magic tricks. Just Mads.”

Adds Vinterberg: “By the time we came to shoot that scene, all our barriers were down, all our layers of protection were gone. We weren’t in a position to discuss or argue. We’d lost everything anyway. Mads just did it. He just danced.”