For director Lee Isaac Chung, the most stress-inducing screening of Minari was not the movie’s packed Sundance Film Festival world premiere, but rather a post-Thanksgiving dinner showing in his Los Angeles living room.

Minari is based on Chung’s childhood move to Arkansas, where his family lived in a trailer on the land on which his father, who emigrated with his mother from their native South Korea, hoped to build a farm. Throughout writing and production, Chung decided not to tell his family that his movie pulled from large swaths of their lives. Still, his parents were “piecing it together,” he says, as he told them bits of the plot and asked questions about their work as chicken sexers (the practice of determining the sex of a chicken after it has hatched). “They thought I was doing some exposé about them,” he remembers of the time, adding that he couldn’t bring himself to admit to his parents that the film was about them. “They were stressed about it and I was stressed about it.”

It wasn’t until the movie was in postproduction — 10 months after Brad Pitt’s Plan B signed on to produce, seven months after indie studio A24 greenlit the project, and two months after the Oklahoma shoot wrapped — that Chung came clean. As almost any little brother would do, he sought counsel from his older sister. “She was quiet for a while. Then she was like, ‘You are right, you shouldn’t tell them. They’re going to kill you,’ ” says Chung with a laugh. A plan was devised, and that was how the filmmaker ended up crowded onto his couch with his family, all visiting from Colorado, to watch an early cut of the film. 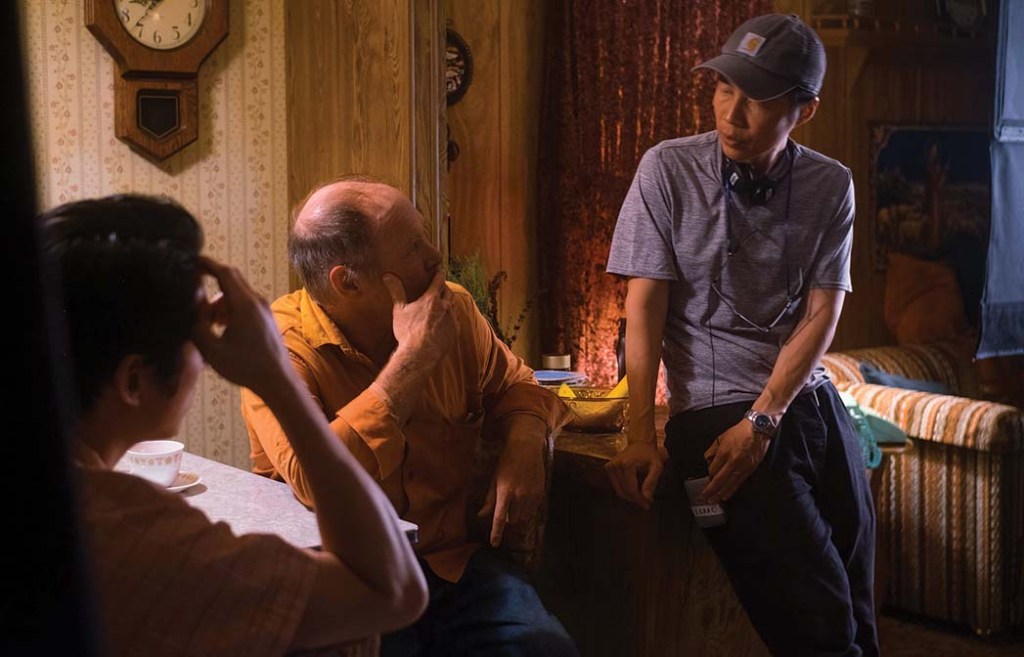 As his mother and sister laughed and cried, Chung nervously took note of his father, who sat quietly. “At the end, all he said was, ‘Good movie.’ And then he walked out to gather himself,” says Chung, who apologizes as his voice cracks while recounting the moment. “He came back and we hugged for five minutes. I think he felt that I understood him.”

This was the spirit in which Minari was made. Intentionally composed mostly of Koreans and Korean Americans, many the children of immigrants, the cast and crew of the movie seized on the industry’s invigorated reverence for authenticity and representation to create a new type of American story — their own. Or, as star Steven Yeun explains it, “This is probably the first time something like this could have been made. Second-generation [kids] — a lot of millennials, mainly — are in positions where they can create things like this.”

It was in 2018 that Yeun, who had made a transition from fan favorite on The Walking Dead to prolific indie actor, signed with a new agent, CAA’s Christina Chou, who mentioned that she also repped his cousin. “And I was like, ‘What are you talking about?’ ” he says. The actor then remembered Chung, a first cousin of his wife whom he occasionally crossed paths with at family weddings. Yeun, who had seen Chung’s 2007 drama Munyurangabo in theaters, read Minari, and not only did he sign on to play Jacob, the film’s patriarch, but he also committed to executive produce — his first producing credit. 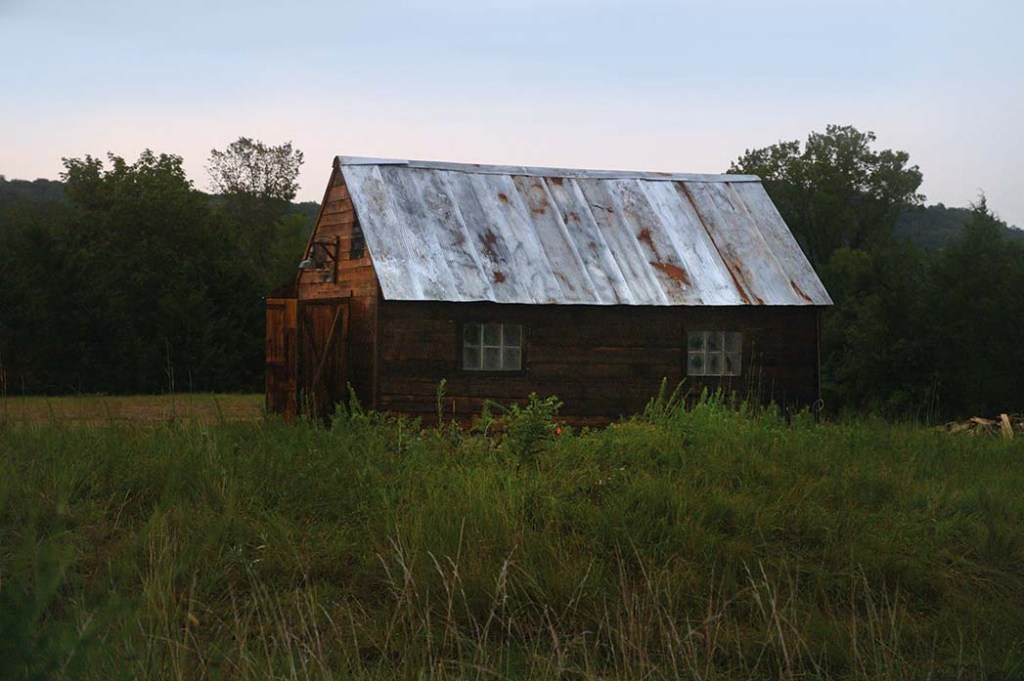 “After Okja I got sent a lot of, you know, Asian material, and I hadn’t read anything that resonated with me,” says Plan B producer Christina Oh. It was at the top of 2019 that Yeun, whom she worked with on the Bong Joon Ho-directed Netflix movie, sent her Minari. The story’s central family felt familiar to her personally (Oh also grew up in the ’80s as the child of Korean immigrants), but, as a producer, she knew these characters were unfamiliar to Hollywood. “That authenticity is something we strive for,” she says.

These initial machinations, while coming together quickly, were happening half a world away from Chung, who had relocated to South Korea to teach university courses on film history and documentary film. “I was an art house guy, making little, not-much-happening films,” he explains of his career, which has included Cannes and TIFF selections but no overtly commercial work. He had begun to plan his second career as a professor when he received a call from a very confident Oh, saying, “Dude, let’s do it,” as she outlined a summer shooting schedule and talked about finding financial partners in A24. “While it is a very American film, the majority of the film is in Korean,” says Oh. “We thought, ‘Who are our partners that would be willing to take a risk?’ ” The answer came with the beloved indie studio that worked with Plan B on Moonlight and was readying to release The Farewell, Lulu Wang’s family dramedy that is in both English and Mandarin. 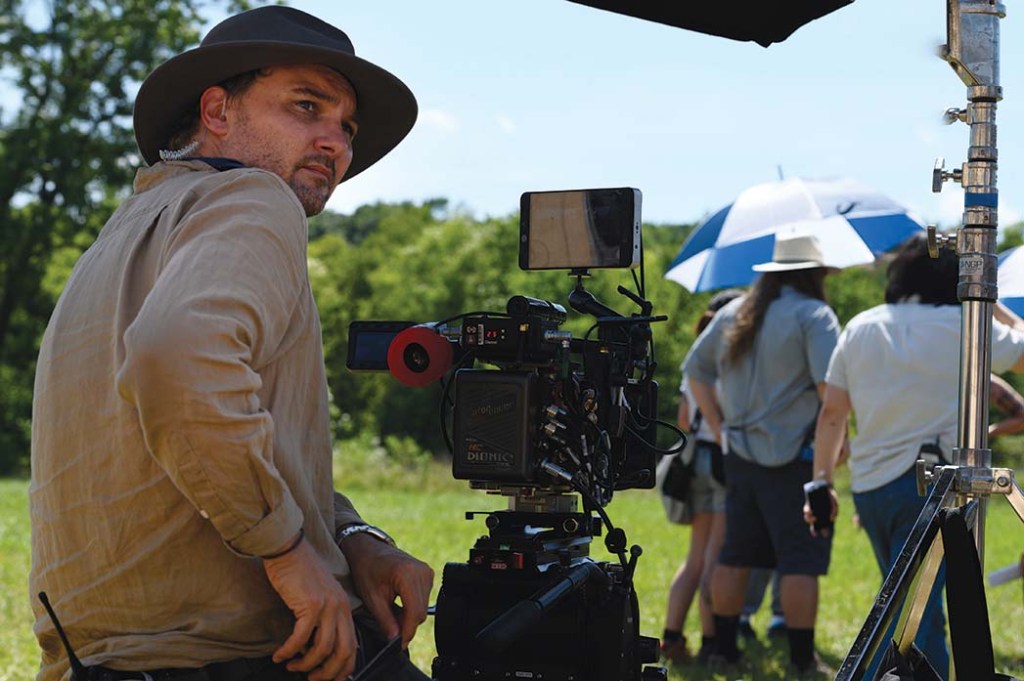 The go-ahead from A24 came in April 2019, with a location scout starting immediately in hopes of making a mid-July start that would allow production to avoid the Great Plains’ tornado season. Arkansas, where the story takes place, did not have the existing production infrastructure that a movie of Minari‘s budget required. And while Georgia, Hollywood’s favorite tax haven, was considered, at the time the state’s controversial anti-abortion Heartbeat Bill kept the filmmakers away. This is how the production landed squarely in Middle America, shooting outside Tulsa, Oklahoma, at the foothills of the Ozarks.

Shooting on location meant that almost every set piece, prop, costume and support staffer would have to be found or built, within the movie’s budget, which came in under $10 million. Since much of the film takes place in a cramped mobile home, production designer Yong Ok Lee found herself haggling with a remodeled trailer home salesman who advertised on local television in Tulsa. “The people who run that place thought she was out of her mind,” jokes Chung. Lee rummaged through rows of mobile homes, Frankensteining together a late-’70s single-wide by pulling lighting fixtures from one mobile home, a carpet from another and siding from yet another to create the movie’s central set. 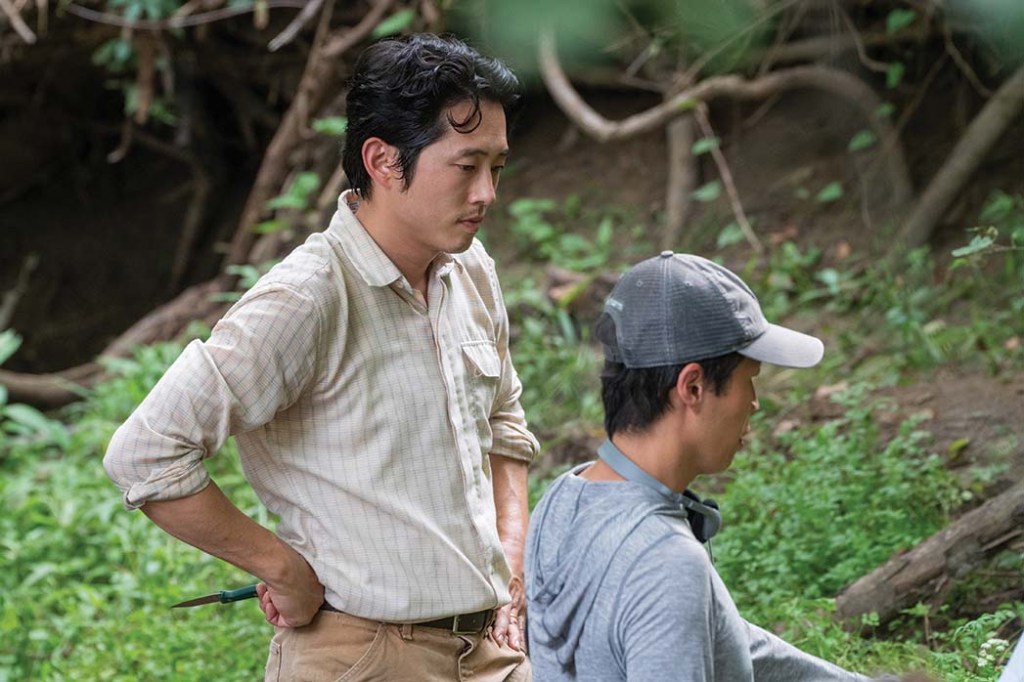 Minari is an ’80s period piece, but not of the Day-Glo leg-warmer variety. Costume designer Susanna Song was tasked with finding clothes that could populate a low-income household in a color palette that would not overwhelm the film’s natural exteriors. An abandoned Oklahoma department store called Bayouth’s that closed in the late ’90s, with all its product still inside, proved vital. “There was a film of dust over a lot of things. My assistant actually found a rat hanging off a dress,” Song says with a laugh of horror.

After roughly four weeks of prep, production was able to start in July, with the trailer driven to an empty field amid working farmland. The good news about making the July start date was that tornados weren’t a concern; the bad news was that temperatures averaged in the high 90s. And the trailer, which could not be air-conditioned during filming without compromising sound, would be even hotter during takes, sometimes reaching into the low 100s. “Film shoots generally don’t smell good,” offers Chung. “With the accolades the film has been getting, we joke if they would be saying these things if they knew what that trailer smelled like.” Because there were no multiples of the vintage wardrobe, Song, who made sure not to dress the cast in polyester, was doing laundry every night. (Chung’s wrap gifts to the production were T-shirts emblazoned with a trailer home and the phrase “Livin’ the Dream.”) 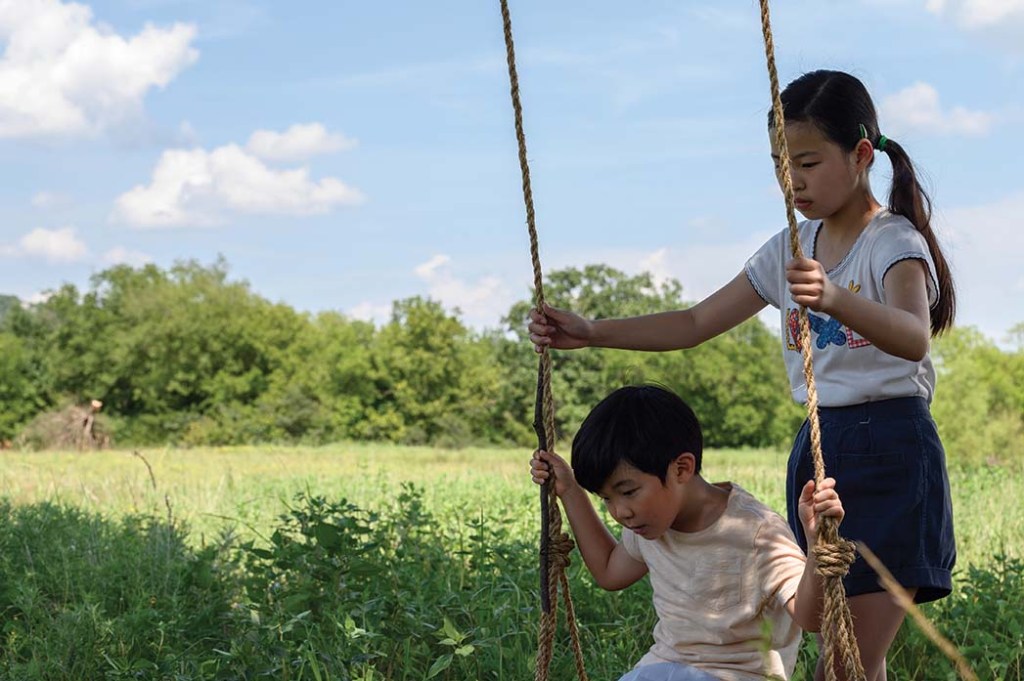 Outside of the mobile home, the shoot’s largest set was a barn that needed to be built and then, in the movie’s climax, burned to the ground. With cinematographer Lachlan Milne, Chung fought to actually burn down the barn, explaining to nervous producers, who were hoping to use digital flames, that “this is not a film with car cases. This is leading up to a devastating moment, and it needs to be a spectacle.” Adds Milne: “It needed to be visually tragic.”

A local pyrotechnics expert was brought in, and the barn was scored to allow for a controlled collapse. Milne ran around the periphery of the flames with a handheld camera, while keeping the cast at a safe distance as the burn grew in size. For Yeun and co-star Yeri Han, who plays his resilient onscreen wife, Monica, the scene, which came at the end of a 25-day shoot, was a welcome catharsis. “I just stared at the fire, watching all of [Jacob’s] work being burned to the ground, and I looked at Yeri and she was sobbing,” remembers Yeun. “To have an immersive experience was incredible.” 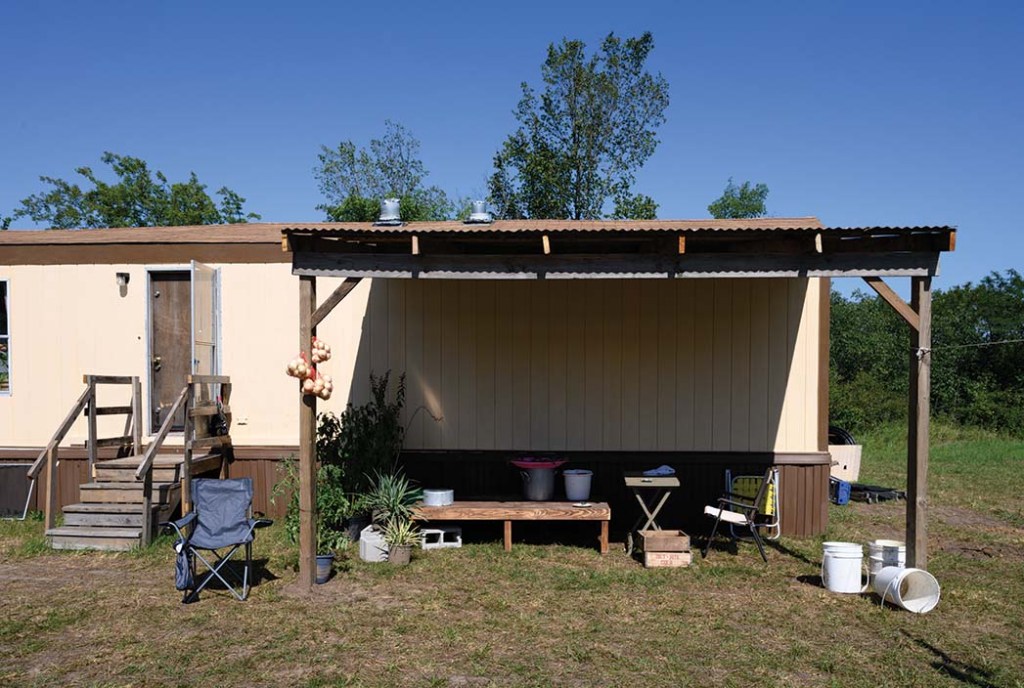 In order to make a Sundance deadline, editor Harry Yoon began assembling an edit on the first day of production, cutting dailies as they came in from set while marveling — and sometimes crying — at how much of his own life he recognized in the film. “It gave me a sense of pride and optimism to see Asian Americans working at this level,” he says.

At Sundance, Oh, Yeun and Chung had their parents stay in a condo together. Less than a year after their first phone call about Minari, the filmmakers all sat together in the Library Theatre with the mothers and fathers who had inspired so much of their work. “It was loaded,” remembers Yeun of that first screening. Unlike that festival audience, many who watch Minari will not be able to do so in theaters when the movie is released Feb. 12, a disappointment the filmmakers are honest about. “There was something so infectious about the laughter and the tears, and that immersion with the film is something we tried to create,” says Chung. “These people are bigger than we are.” 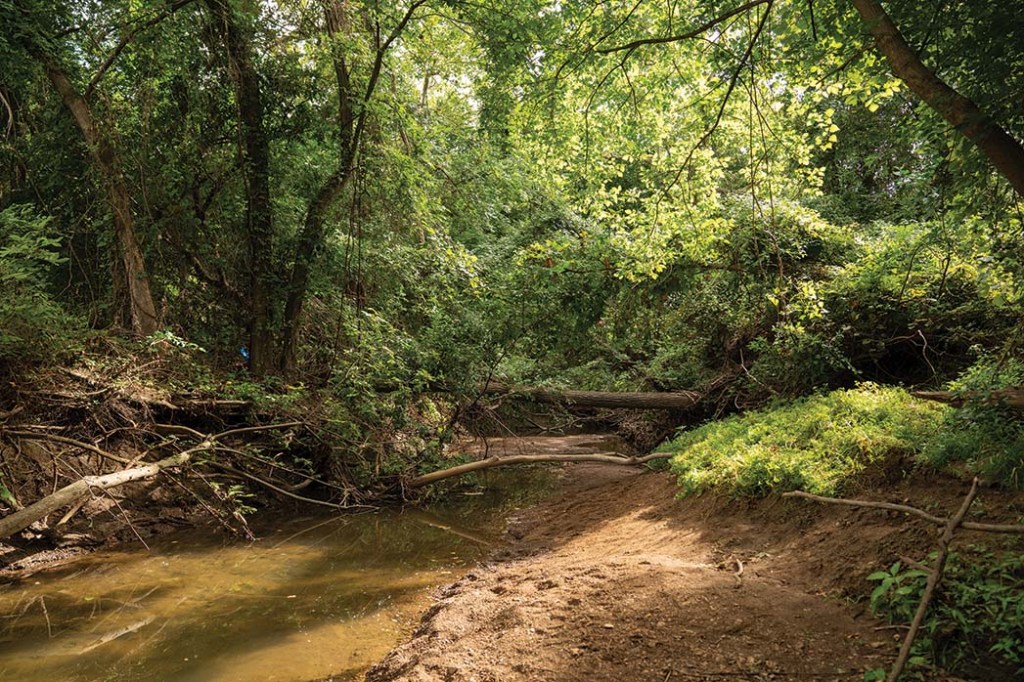 Parasite‘s best picture win came one month after Minari won both the Grand Jury Prize and the Audience Award at Sundance, suggesting that both audiences and Hollywood possess a willingness to scale “the 1-inch-tall barrier of subtitles,” as director Bong described it in his Oscar speech. Still, many feel the movie is being held to outdated industry standards, having been classified as a “foreign-language film” by the HFPA for Golden Globes consideration, despite the fact that it was financed by American money and shot entirely in the U.S. The decision generated considerable backlash, with prominent industry figures like Wang, Phil Lord and Daniel Dae Kim calling for a reclassification of the film.

Nevertheless, for the filmmakers, the hope is that Minari portrays an America that has been around for decades, if not onscreen. “We want to be an expansion of what Americanness is and already was,” says Yeun. “It’s pizza with kimchi.”

Inside the Golden Globes' 'Minari' Controversy