After he finished his most recent film, 22 July, about a family caught up in right-wing extremism and the domestic terrorist attacks in 2011 in Norway, Paul Greengrass was plagued by a question. “The world is so bitterly divided,” Greengrass says he asked himself. “What is the road out of this going to look like for our children?”

To find the answer, Greengrass ended up looking backward, to a story set in post-Civil War Texas, the backdrop of his latest film, News of the World. The British director, best known for the visceral action of his Jason Bourne movies and the tension of his fact-based thrillers like United 93 and Bloody Sunday, didn’t want to make another movie exploring the darkness like 2018’s 22 July. “I wanted to make a film about hope, restitution, what the road to healing looks like,” Greengrass says, speaking via Zoom in January from his home in Suffolk, England, accompanied by his Labrador retriever, Dolly.

Cannes Flashback: In 2004, Tom Hanks Charmed and Disarmed the Press

News of the World, which is based on the 2016 novel by Paulette Jiles, offers one version of that road. The Western, which reteams Greengrass and Tom Hanks after their 2013 best picture nominee Captain Phillips, stars Hanks as Capt. Jefferson Kyle Kidd, a former member of the Confederate infantry who now makes his living traveling town to town reading newspapers for an audience. When Kidd becomes the reluctant caretaker of a young girl (newcomer Helena Zengel) who had been stolen by Native Americans as an infant and must be returned to her family, the two develop an unlikely kinship. 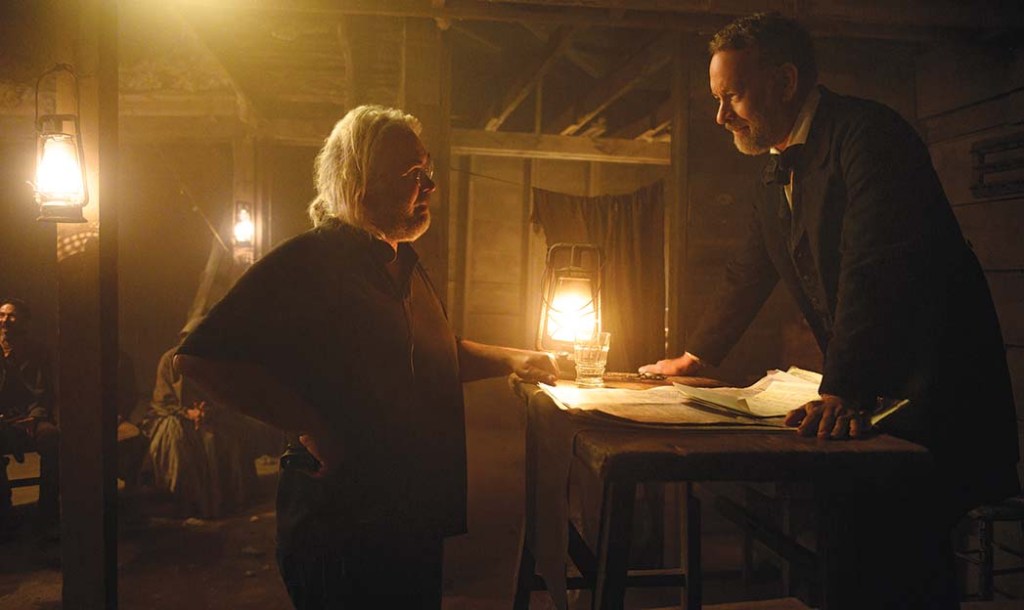 For Hanks, according to his Playtone producing partner Gary Goetzman, much of the allure of the film was in playing a storyteller bringing news to a hungry public. “The idea of someone going around and being the post-Civil War version of CNN absolutely touched him,” Goetzman says. Screenwriter Eric Roth had recommended the book to Hanks, and Playtone set up the film with then-Fox 2000 president Elizabeth Gabler, who enlisted Greengrass. When Disney bought Fox and shuttered the label in March 2019, “Suddenly, there was this enormous corporate restructuring of our industry, and here’s our little film in the middle of it,” Greengrass says. “You think, ‘Oh, we’re just going to be swamped.’ ” But within weeks, Universal had picked up the film and, by September, a 53-day shoot in and around Santa Fe, New Mexico had begun.

When Greengrass wrote the script with Lion screenwriter Luke Davies, he made a decision to keep the story’s biggest traumas — the captain’s war years and the girl’s childhood violence — off the screen. “I didn’t want to tell it with flashbacks,” Greengrass says. “What we learn about what happened to those characters, I wanted us to learn from them as they face up to it.” Greengrass also wanted to be sure not to make Zengel’s character too modern or smart-alecky. “Melodrama, which is what the flashbacks would have been, and cute choices, which making her sassy would have been, would have taken away from the profundity of the journey.”

Among the most daunting tasks was finding an actress who could play the little girl, Johanna, who was to have been born to German-American parents and raised by the Kiowa tribe. Producer Gail Mutrux saw Zengel, now 12, in the 2019 German drama System Crasher and sent the film to Greengrass. “I thought, ‘Well, she’s the real deal.’ You could tell immediately,” he says. “So it was always going to be her. I didn’t even bother to look anymore.” Zengel learned some lines of the Kiowa language for the audition, but it was her ability to communicate nonverbally that impressed Greengrass. “That character was in many ways very tough because I needed to really talk with my eyes and show my emotions,” Zengel says. “I could speak, but [Kidd] wouldn’t understand me.” Zengel, who has her own horse at home in Germany, was comfortable with the film’s many scenes of horsemanship, but there were signs on set that she was new to the business. “One time her microphone was hot, and it was quite early on, and they were sitting on the wagon as we were setting the shot, and I suddenly heard her say, ‘Tom, does everybody on an American film set swear all the time?’ ” Greengrass says.

Dorothy Whitehorse Delaune, an elder of the Oklahoma Kiowa who also appears in the film, taught Zengel, Hanks and Greengrass the Kiowa language and advised the film on the portrayal of the tribe, which hadn’t been depicted in a Hollywood movie since the 1950s. “I learned the culture, the language, their way of thinking, their way of moving, the way they would behave,” says Zengel. “I asked them about their history, with the white people taking their land. It was very interesting for me to hear their version of what really happened and what they went through.” 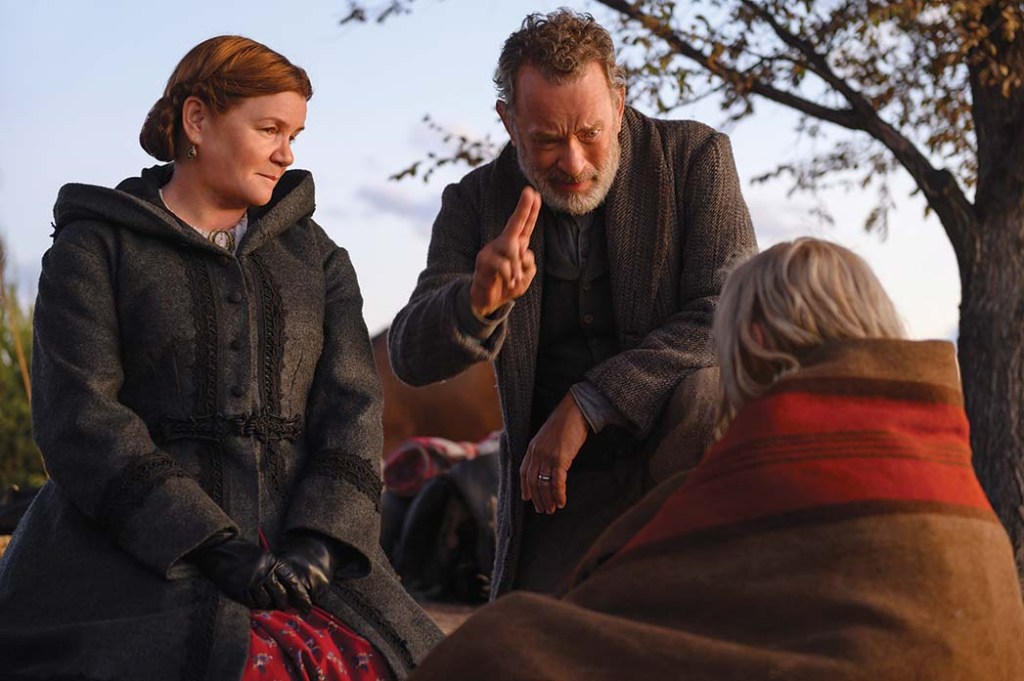 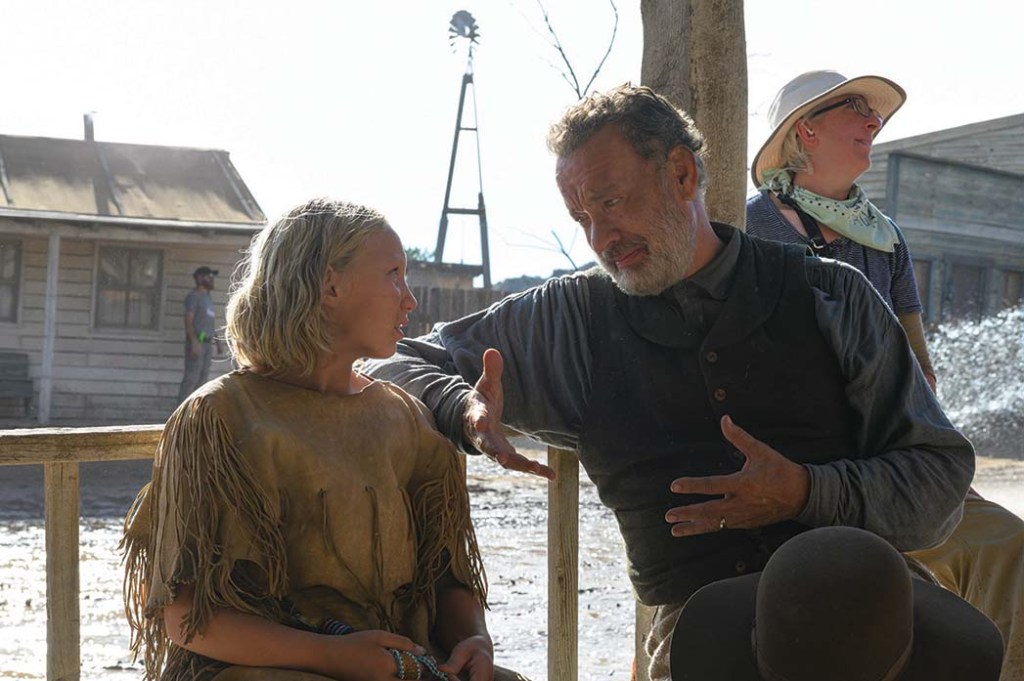 News of the World is the first Western for both its director and star. Greengrass, who explored John Ford’s legacy in the 2017 Netflix docuseries Five Came Back, considers this feature a version of Ford’s The Searchers in reverse — whereas in The Searchers, John Wayne is looking for an abducted girl, in News of the World, Hanks is bringing her home. “You feel the giant footprints of all those great Western directors — but Ford most of all — when you’re making a Western,” says Greengrass.

By way of visual inspiration, Greengrass shared with director of photography Dariusz Wolski a handheld black-and-white 1964 Pier Paolo Pasolini film called The Gospel According to St. Matthew. The goal was to bring a more classical approach to Greengrass’ signature dynamic, handheld camerawork. “I believe in simplicity,” Wolski says. “We didn’t use cranes. We didn’t use any fancy equipment. It is kind of nice to restrain yourself.” The film is shot handheld — but not obviously so. “Dariusz is known for his beautiful cinematic work, whereas mine tends to be much more first-person,” Greengrass says of Wolski, who has shot several Ridley Scott films, including The Martian, as well as the Pirates of the Caribbean series. “We were pushing and pulling each other in an interesting way. It didn’t take long before it felt both like mine but also classically shaped and given some air to breathe to have what a Western needs, which is a sense of place and landscape.” 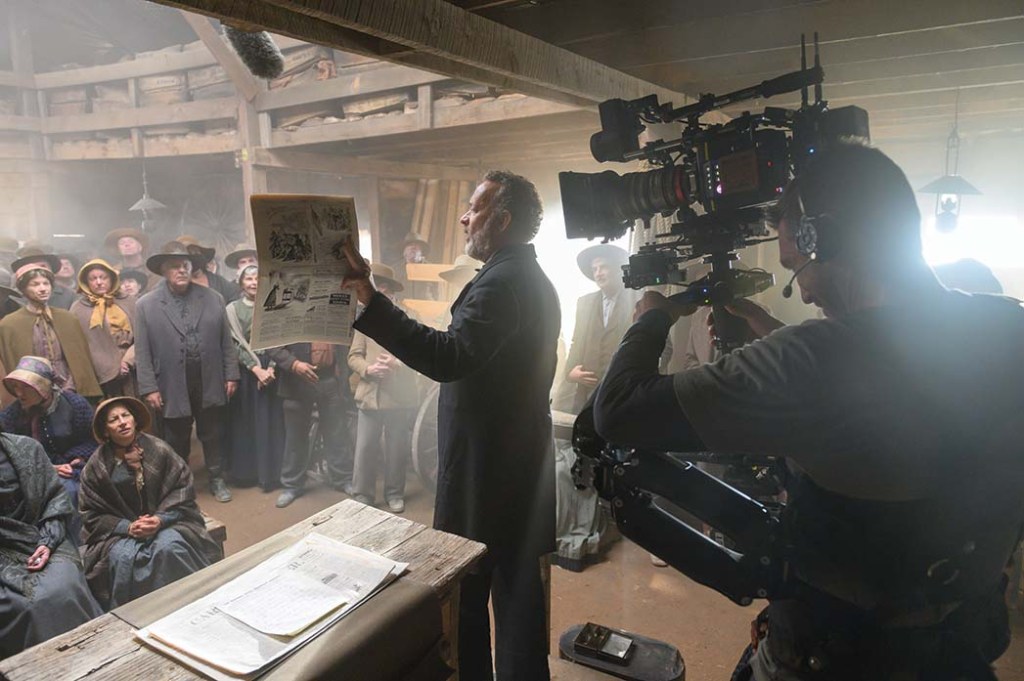 Among the biggest challenges were the terrain (for one shootout scene, the cast and crew had to climb ropes to get into position) and rattlesnakes (there was an on-set snake wrangler). Hanks took to the environment more than anybody, according to Wolski. “He comes on the set with a little chair, sits down, and we’re waiting for stuff,” Wolski says. “At some point, I said, ‘Tom, it’s going to be a while. You can wait in your trailer.’ He said, ‘I’ve been in trailers all my life. Look at this. It’s beautiful here.’ He has a little umbrella, sits on the chair, and he’s super happy.”

Production wrapped in December 2019, and Greengrass and his editor, William Goldenberg, had finished the director’s cut of the film and were preparing to screen it for Universal in mid-March when the seriousness of the pandemic sunk in — as it did for many — through the news of Hanks being sick in Australia. “I just got a call at like 6:30 in the morning,” Goetzman says. “Tom said, ‘Hey man, I got coronavirus.’ It was like, ‘Whoa.’ “ 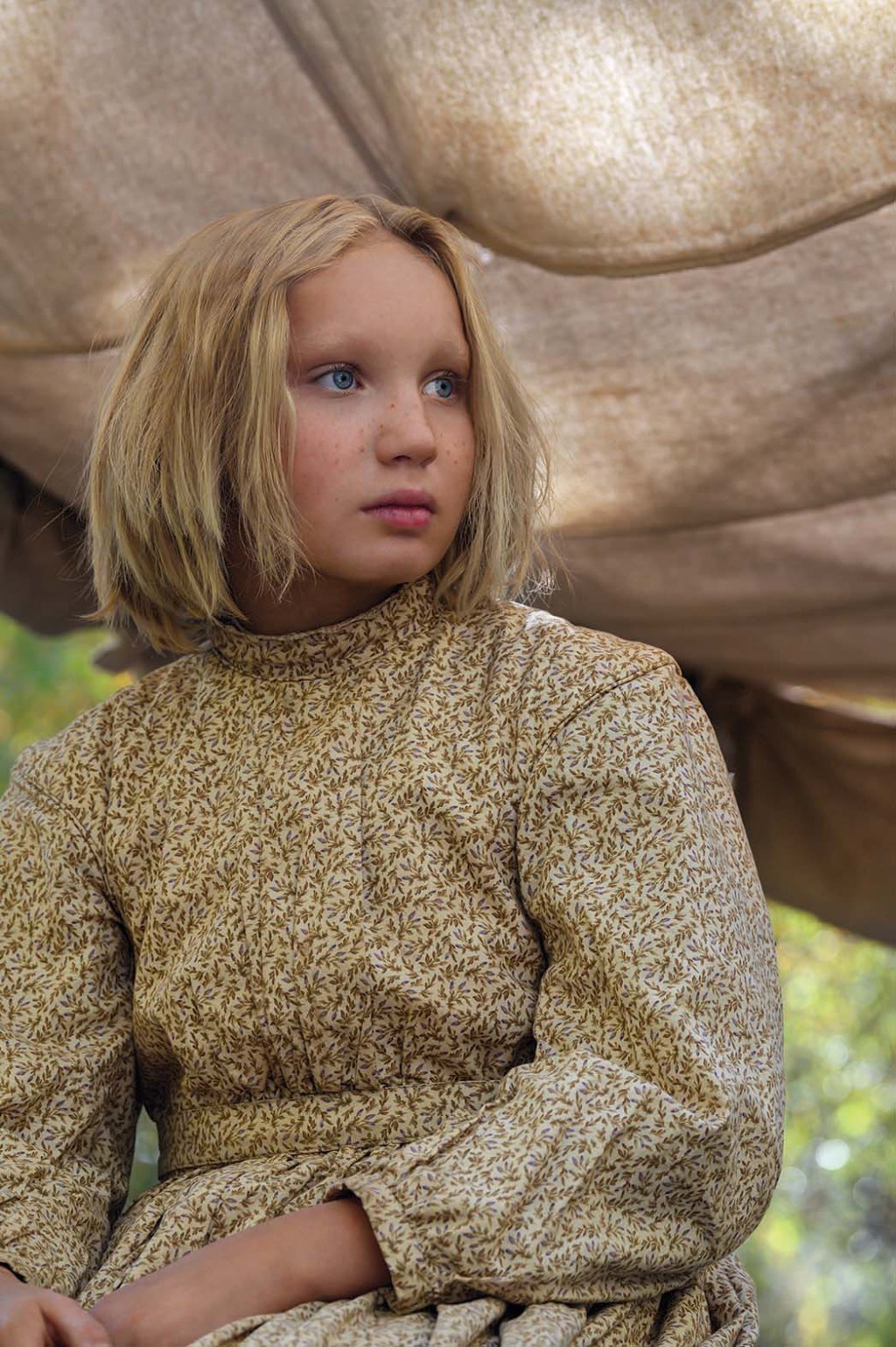 The edit proceeded remotely using software called Evercast, and once Hanks had recovered, he was able to do some looping. “We were aiming to be subtle, to have no giant Hollywood tropes in terms of their relationship,” Goldenberg says of editing the scenes with Hanks and Zengel that make up the majority of the film. “We wanted you to see it and feel it as much as you heard it.”

News of the World was always scheduled for a Christmas theatrical release, but as the pandemic worsened and theaters in major markets stayed closed, Universal adapted, still bringing the film to the theaters in the U.S. that were open but with a shortened window before it was available Jan. 15 on premium VOD and internationally on Netflix. “The truth is, there are no good choices, are there?” Greengrass says. “I didn’t want to wait a year, because I felt the film was speaking to now.”

Like Hanks’ captain, Greengrass intends to find his audience in a difficult time. “It was, in the end, about a bloke who read stories, and that’s what we do for a living,” he says. “At the time of this tremendous, churning, global uncertainty and chaos and grief, and all the rest of it, this movie’s threaded its way through. We tell our stories in difficult times and hope for better times to come.” 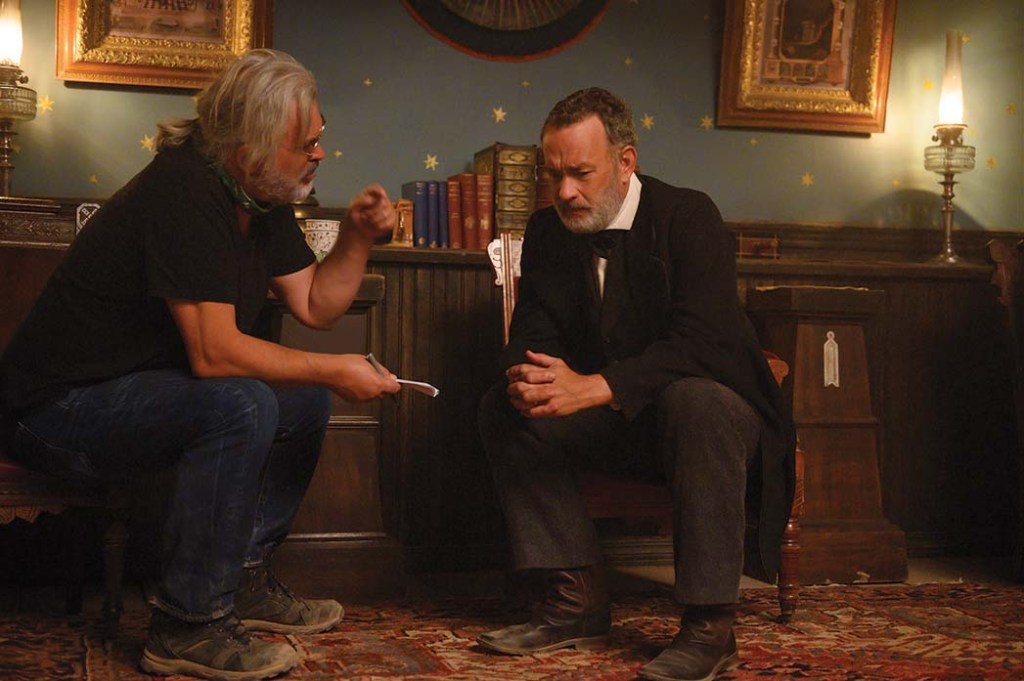