On the day of the 2018 Indie Spirit Awards, Frances McDormand, Peter Spears and Chloé Zhao converged at McDormand’s Los Angeles apartment to discuss collaborating on a film. McDormand and producer Spears had recently optioned Jessica Bruder’s book Nomadland, a nonfiction ode to baby boomers forced to live in campers as a result of economic hardships, and Zhao was their first choice to direct. Later that day, McDormand would win a best actress Spirit Award for Three Billboards Outside Ebbing, Missouri, while Spears’ Call Me by Your Name was facing off against Zhao’s The Rider for best picture. But on that cool March morning, there wasn’t a hint of competitiveness.

“She was wearing overalls,” Zhao recalls of her first impressions of McDormand, 63. “She’s very fashionable and she made that overall feel like a whole trend. Just looking at her, the iconography of Frances McDormand, whether it’s a police uniform or overalls — my mind was going 1,000 miles an hour of what would [Nomadland protagonist] Fern look like. Could we create another iconography through her?” 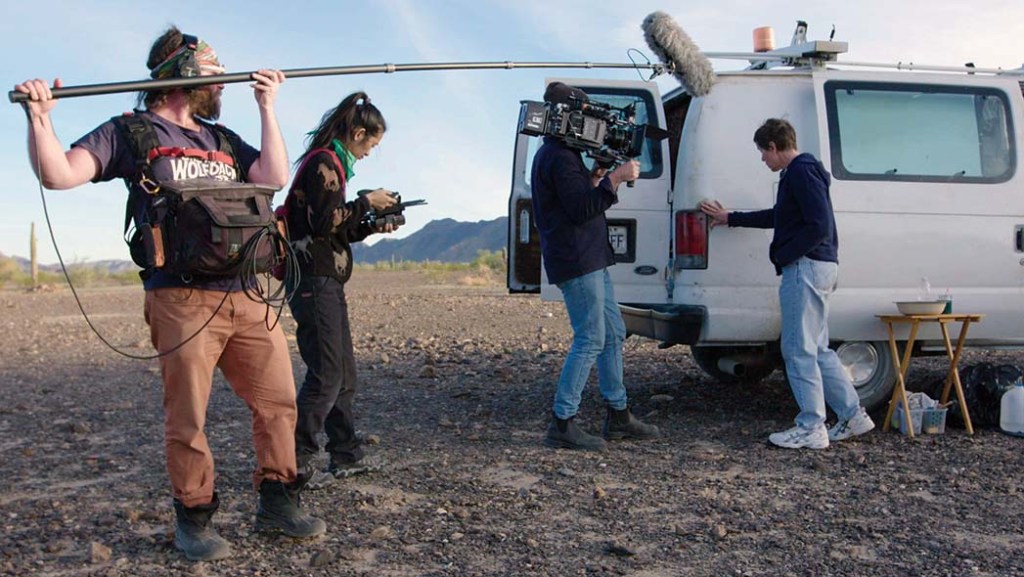 While McDormand may have set the stage with that outfit, the fact that the women were like-minded about the material sealed the deal. “Immediately, it was very much Fran and I realizing that we have a lot in common, that the things that attracted us to the book are very similar,” Zhao adds. “We realized we wanted the same things.”

Within six months, Zhao, McDormand and Spears hit the road and embarked on the $4 million to $6 million Searchlight film’s five-month shoot. The unconventional road trip movie coiled through punishing landscapes in five states — Arizona, Nebraska, Nevada, California and South Dakota. The cast comprised a few professional actors like David Strathairn, McDormand’s longtime neighbor, mixed in with the real people who populate Bruder’s book. At the center is McDormand’s Fern, a woman left destitute by America’s throwaway attitude toward the aged, and her relationship with the road. 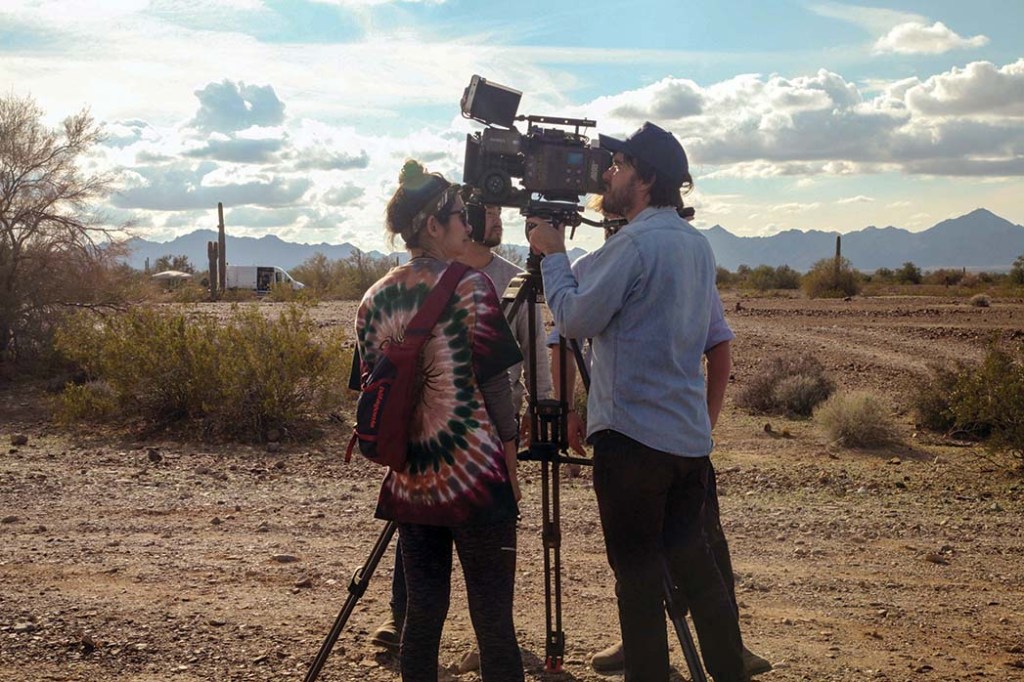 The Nomadland journey actually dates back well before that March 2018 meeting. Bruder began reporting on the nomadic senior phenomenon in 2011 and wrote a 2014 cover story for Harper’s that introduced such real-life characters as Swankie, Linda May and the movement’s guru, Bob Wells. The Harper’s piece served as the basis of her 2017 book, Nomadland: Surviving America in the Twenty-First Century, which caught the attention of a literary agent at UTA, where McDormand is represented by Spears’ husband, Brian Swardstrom. McDormand and Spears teamed up to option the book while it was still in manuscript form.

Just as the book was about to be published in September of that year, McDormand slipped out of a Toronto Film Festival press junket for Three Billboards, for which she would later earn her second best actress Oscar, for a screening of Zhao’s contemporary Western The Rider. “She called me immediately and said she thought she might have just seen a movie by a director that we should strongly consider for our movie,” Spears recalls. 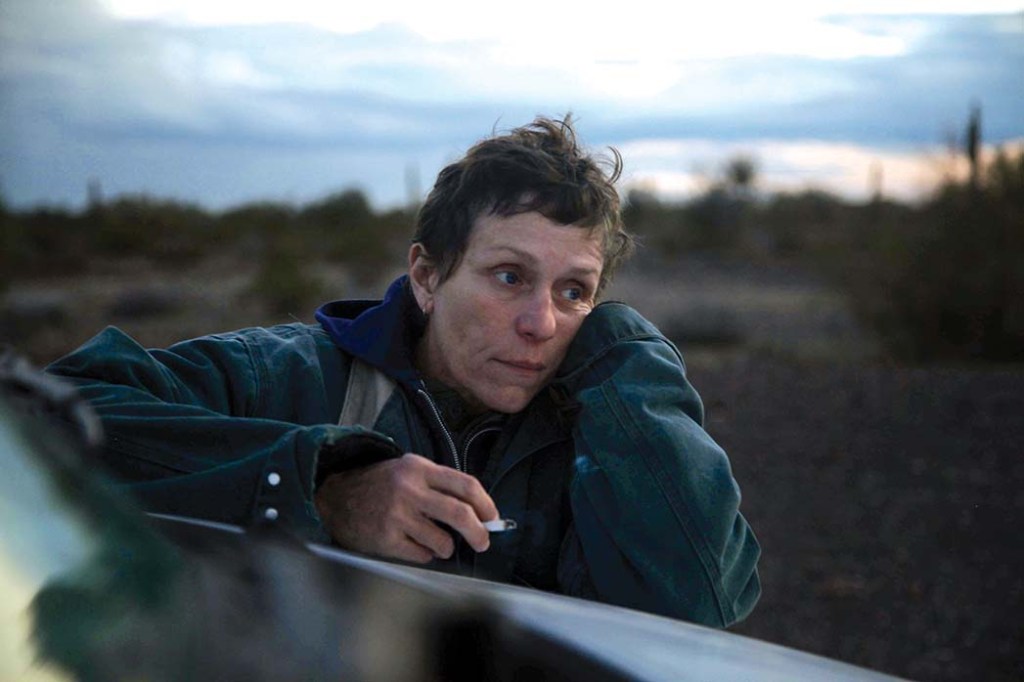 Zhao, 38, a Beijing-born, London-educated filmmaker, had been itching to make a road movie set in the American West, but says, “I wasn’t familiar with what the road meant to people of Fern’s generation, and that took on a whole different meaning. A whole way of life was disappearing for that generation, and that intrigued me.”

Once Zhao signed on, she began working on a script. Or, more aptly put, a non-script. “I don’t really ever feel like I had an artifact that was a script,” says McDormand. “We had scenes that were written, but it was much more of a blueprint, I think, for Chloé than it was a script per se. Not a script like a traditional script.” Working with nonactors, she explains, “I was always trying to be like, ‘Oh, maybe I can help. Maybe I can say something and help them talk.’ And what Chloé really needed me [to do] was just to be quiet and be there and be a part of the architecture of the scene.” 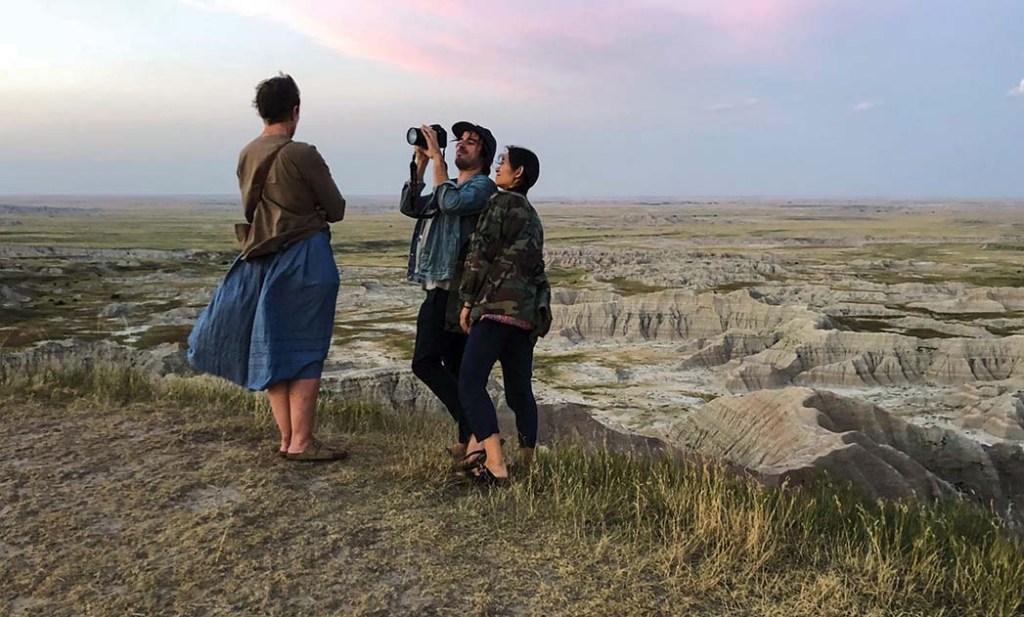 Weather dictated how the shoot was planned, considering the extremes in the American West. The first scene took place in Badlands National Park. Zhao insisted on South Dakota as the first stop, given her preference for the September light there, having shot Songs My Brothers Taught Me and The Rider in the state during that month ­— both with Nomadland cinematographer Joshua James Richards at her side.

While the badlands offered a familiar backdrop for Richards, the Arizona wasteland tested his sanity. “The smooth desert was a challenge over a period of time,” says the British cinematographer. “Staying at a Best Western Hotel every night, you know, with a gas station next door and trying not to drink yourself to sleep.”

On another film, the experienced actors might have retreated to their tricked-out trailers, while the nonprofessional actors likely would have sequestered themselves, but the two groups banded together seamlessly. “Chloé created for everyone, actor and nonactor alike, a space that was based on patience, compassion and just curiosity about the lives of everyone,” says Spears.

In March 2020, just as the novel coronavirus pandemic hit, Zhao began editing the film. It was a tricky proposition given that she was also in postproduction on the Marvel movie Eternals, so she alternated between the two films.

By then, Zhao was seeing her vision near completion. A relative newcomer, with just two features under her belt, she’d successfully steered it alongside McDormand, a legend and at the top of her craft, who herself sometimes ceded control of the material that she’d first championed.

“You’re seeing a movable object meets unstoppable force,” says Richards of the McDormand-Zhao dynamic. “As a result, it’s fireworks. But it’s also two human beings, two incredibly talented, powerful women, and they were both dedicated to telling this story. Watching how they were able to navigate that collaboration was really inspiring. It crossed cultural lines and it crossed generational lines.”

Rebecca Keegan contributed to this report.

Chloe Zhao on Finding a "Delicate Balance" While Editing 'Nomadland'