When the house lights came up after a performance of Kemp Powers’ One Night in Miami, producers Keith and Jess Wu Calder realized the play they’d just seen was the perfect source material for a film. “Pretty much the next day we tracked down Kemp,” Keith says of his initial excitement for the project after seeing the 2013 production at Los Angeles’ Rogue Machine Theatre that earned three L.A. Drama Critics Circle Awards. At the time, he says the Calders were drawn to “discussing and finding ways to deal with [civil rights struggles in America] in ways that can be entertaining but also open people’s eyes to structural and institutional problems.”

Powers’ play fit squarely within that mission. Taking place Feb. 25, 1964, One Night in Miami brings together four Black icons at the intersection of politics, sports and pop culture — boxer Cassius Clay, activist Malcolm X, pro football star Jim Brown and soul singer Sam Cooke — who really did spend that evening together hours after Clay stunned Sonny Liston to capture the heavyweight championship of the world. (Sports Illustrated would call the bout the fourth greatest sports moment of the 20th century.) What those men discussed that night is lost to time, but Powers’ play imagined what they may have talked about, taking into consideration both their celebrity and the crossroads each man faced at the time. Clay would announce the following day that he was a Muslim; weeks later, he would officially join the Nation of Islam and change his name to Muhammad Ali. Brown, who would carry the Cleveland Browns to the NFL championship 10 months later, would set his sights on a new career after making his acting debut in Rio Conchos, coming to theaters that October. Cooke, having already released a string of hits as well as launching a label and publishing company, had just recorded the most important song of his career, “A Change Is Gonna Come,” which would solidify his legacy after he was shot and killed at a Los Angeles motel in December. And Malcolm X, about to usher his young, famous disciple Ali into his religious movement, would a month later leave the Nation of Islam; he would be assassinated almost exactly a year later. 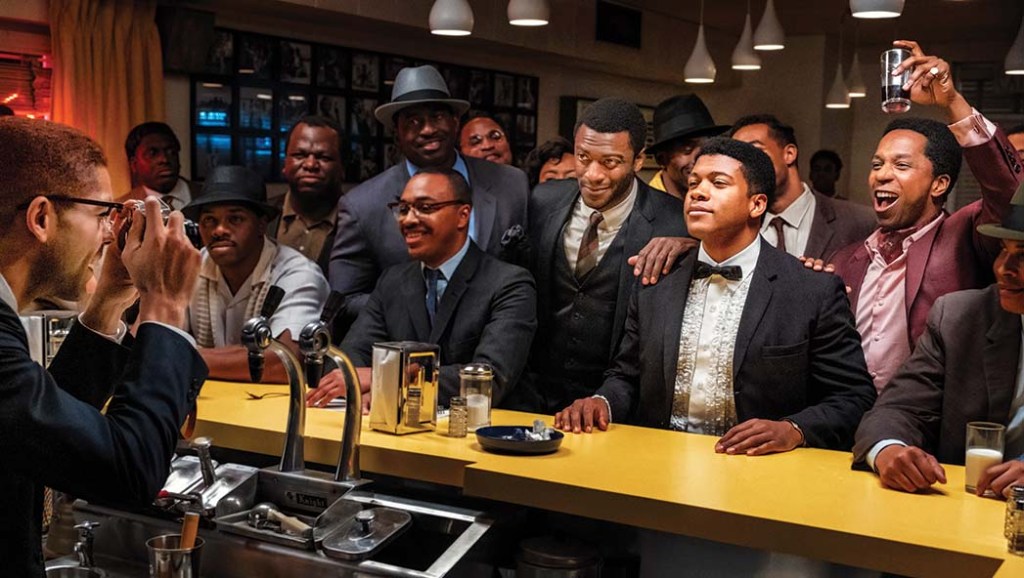 The Calders and Jody Klein of ABKCO, which owns the rights to Cooke’s music, partnered to bring Powers’ vision of that night to the screen, tapping the playwright to adapt it himself. “Being a screenwriter, someone comes to you with a book and says, ‘What would be your take on this?’ That’s how I wanted to treat my own play,” Powers says. With a script drafted — and its four characters breaking free from the confines of the single room at the famed Hampton House motel and lounge in Miami — the film next needed a director suited to pull the project together.

For Regina King, the four men at the center of the story weren’t just historical figures — they felt like men she knew. “I have never gotten an opportunity to see Black men written the way I see Black men in my life,” the Oscar and four-time Emmy winner says of Powers’ screenplay. “Kemp was so smart in using the voices of four of our most iconic people in their respective fields, in our history, and humanizing them.” 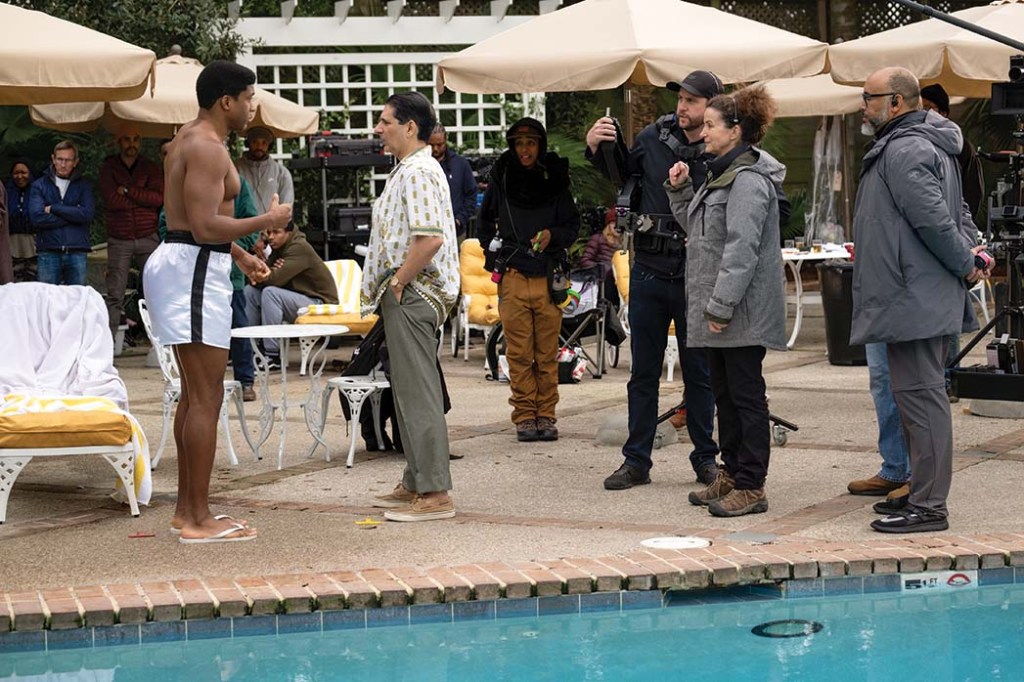 King was in Georgia shooting HBO’s Watchmen, and months later she would win a Golden Globe and an Oscar for If Beale Street Could Talk. With two of her career’s most lauded roles at the top of her résumé, she was on the lookout for a script that would become her feature directorial debut. She first met Powers over a Skype call. “She’s described it like she was auditioning,” Powers says, “but in that moment I was like, ‘Please do this movie.’ “

Though best known for her roles in front of the camera, King was hardly a first-time director; among her helming credits are episodes of Scandal, This Is Us and Insecure. But the chance to direct a feature brought not just the responsibility of leading a production but the freedom to execute her own vision from beginning to end. “I was aware that I was going to have more control, that I was going to be able to tell the story that I wanted to tell,” she says. 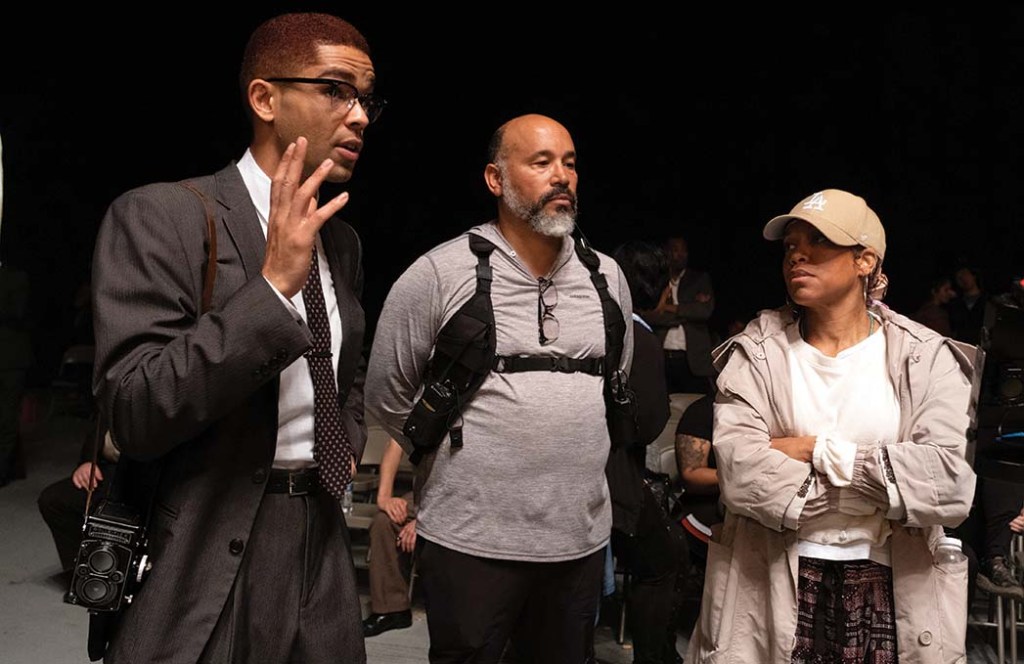 Helping King visually tell that story was cinematographer Tami Reiker, known for her work on Lisa Cholodenko’s debut feature, High Art, as well as Gina Prince-Bythewood’s Beyond the Lights. Reiker brought to her first meeting with King a lookbook of historical photos with rich, saturated colors, plus black-and-white images from street photographer Garry Winogrand. “We both had this vision of a very colorful, rich, saturated film,” Reiker says.

Also proving himself to be an essential member of the team was production designer Barry Robinson, tasked with re-creating some very famous locations — New York City’s Copacabana, London’s Wembley Stadium and, most importantly, Hampton House. The Green Book-listed motel became a flash point for the civil rights movement in segregation-era Miami. And while Powers’ screenplay moves beyond Malcolm X’s room, much of the film takes place at Hampton House. 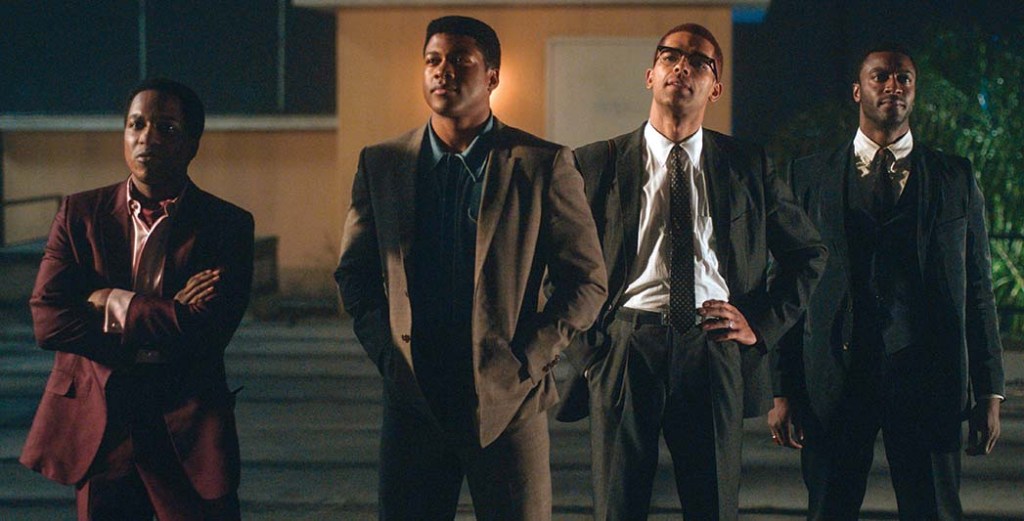 A replica of the motel suite was built on a makeshift soundstage at a community center in New Orleans, where the bulk of the film was shot. The set had to be bigger than a motel room out of practicality; not only would the four actors be maneuvering around the room, delivering pages of dialogue, but so would the camera crew. “We didn’t want the camera to be static,” Reiker says. “We wanted it to feel immersive, like you’re in this conversation.” There were fly-away walls to provide space for wider shots, but scenes that featured the room’s four walls and ceiling required strategic design. “Production designers are a little bit like magicians,” Robinson says. Hiding behind the artwork were strategically placed holes that would allow for the camera to act — quite literally — like a fly on the wall.

Even though One Night in Miami is a period piece, which meant striving for accuracy, it’s still a performance-heavy film. It would only be as good as the actors who anchor it. The four stars — Kingsley Ben-Adir (Malcolm X), Eli Goree (Clay), Aldis Hodge (Brown) and Leslie Odom Jr. (Cooke) — all arrived directly from other projects to the set in January 2020, and there was no rehearsal period. “With no prep time, Regina had to bring these four disparate personalities together,” Powers says. 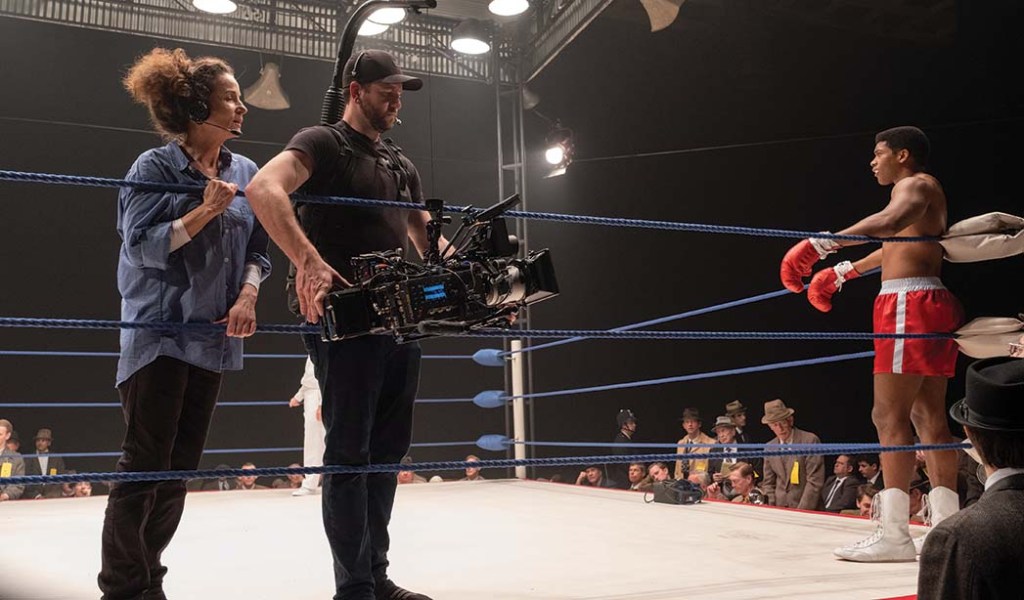 King notes, “Actors have different ways of communicating. How I communicate with Kingsley is different than how I may communicate with Leslie. It was important to figure that out quickly so that you can have that shorthand when you’re in the trenches.” For Jess Wu Calder, the energy that King cultivated on set strengthened the actors’ performances. “It’s a very masculine story,” she says. “To have a female perspective from the director’s chair brought a vibe you wouldn’t get otherwise.”

After the bulk of the film was shot, production was set to finish in Los Angeles. But this was in mid-March, just when COVID-19 lockdowns went into place. Months passed. And with the Black Lives Matter movement soon exploding across the country in the wake of George Floyd’s murder, the film only became more relevant. In July, it was one of the first projects to resume production in Los Angeles. “We so wanted to finish our film,” King says. “When you have that energy going into it, that does relieve some of the anxiety.” 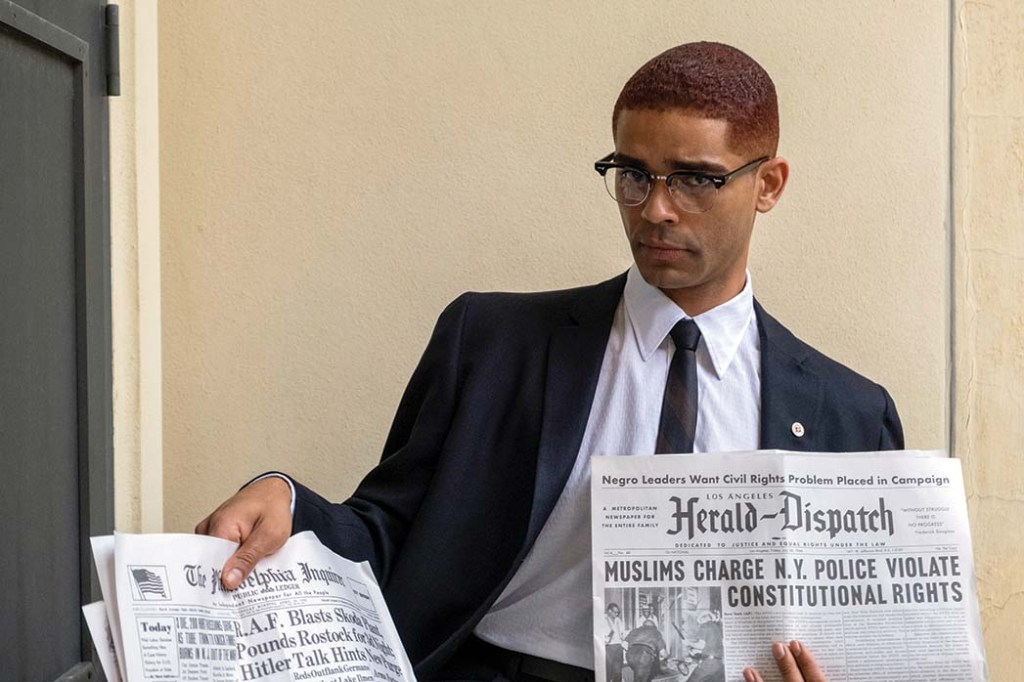 Protests also gave One Night in Miami new urgency. “The public conversation caught up to the movie rather than the movie changing the public conversation,” Keith Calder says. The discussion Malcolm X and Cooke have in the film about the importance of using a public platform for social good was one that many Americans were having among themselves — and it’s a conversation King hopes her film proves can be dramatic, yes, but also vital despite its complexity.

“It’s absolutely a philosophical debate,” she says. “Hopefully the audience sees that this film understands there is not a right or a wrong [side]. Both actually exist.” 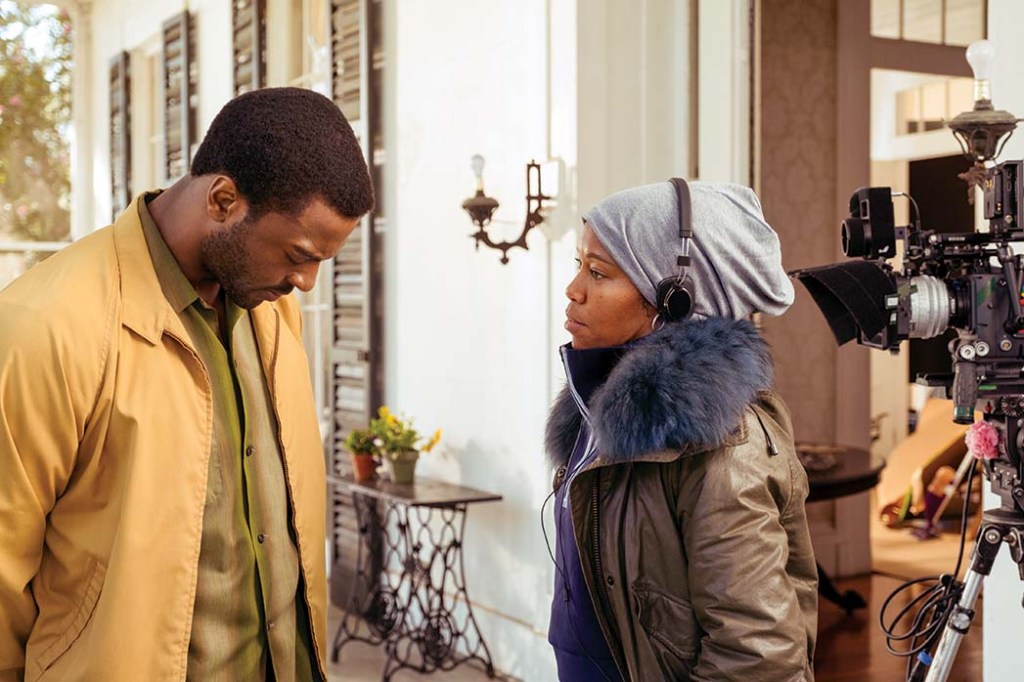