Promising Young Woman began as a single scene rattling around inside Emerald Fennell’s head. It went something like this:

A drunk woman is sprawled out on a bed, when a young man starts removing her clothes.

“What … what are you doing?” the woman asks, her words slurring.

She waits a beat and then asks again — except this time she’s upright, starring him straight in the face, pronouncing each word clear as day: “I said, what are you doing?”

That kernel of an idea would become Fennell’s directorial debut, a darkly comedic, subversive play on the revenge thriller genre. Carey Mulligan stars as Cassie Thomas, a med-school dropout who spends the bulk of her free time at bars, pretending to be fall-on-the-floor drunk, until some guy inevitably brings her back to his place and a version of the scene Fennell envisioned plays out. It is all, the audience learns, part of Cassie’s compulsive desire to avenge the rape of her best friend. 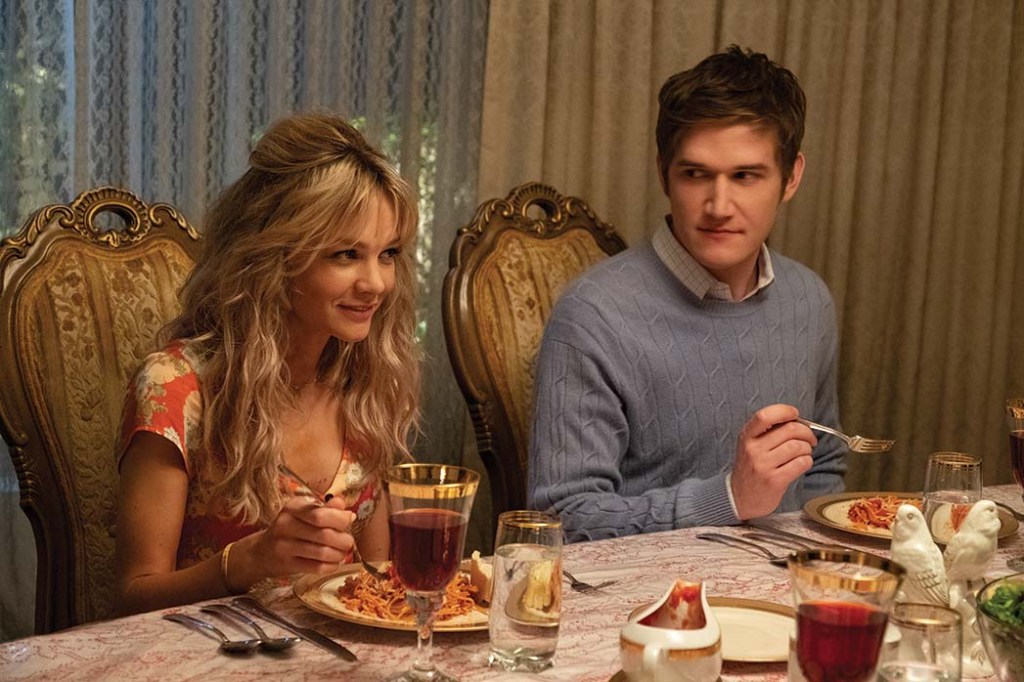 “I had been thinking a lot about rage, particularly the ways that rage manifests itself in women,” says Fennell, a 35-year-old Brit whose résumé also features Killing Eve, which she wrote and produced, and The Crown, in which she acts (as Camilla Parker Bowles). With Promising Young Woman, she found herself eager to play with the idea that men who are perceived as “good guys” are also capable of bad behavior.

Bo Burnham, who signed on to play one of those “good guys,” was struck by what Fennell was attempting to pull off with her first feature. When the #MeToo movement first centered on clear serial harassers like Harvey Weinstein or Bill Cosby, the vast majority of men and women seemed to be on the same page. But as the cultural discussion progressed and grew more nuanced, “it felt like heterosexual men [got all] stiff-armed and went, ‘Whoa, whoa, whoa. What are you saying? I’m not Harvey,’ ” says Burnham. “This movie rightfully extends that conversation and says that there are real gradient levels of being complicit and culpable, and it needs to be talked about and examined.” 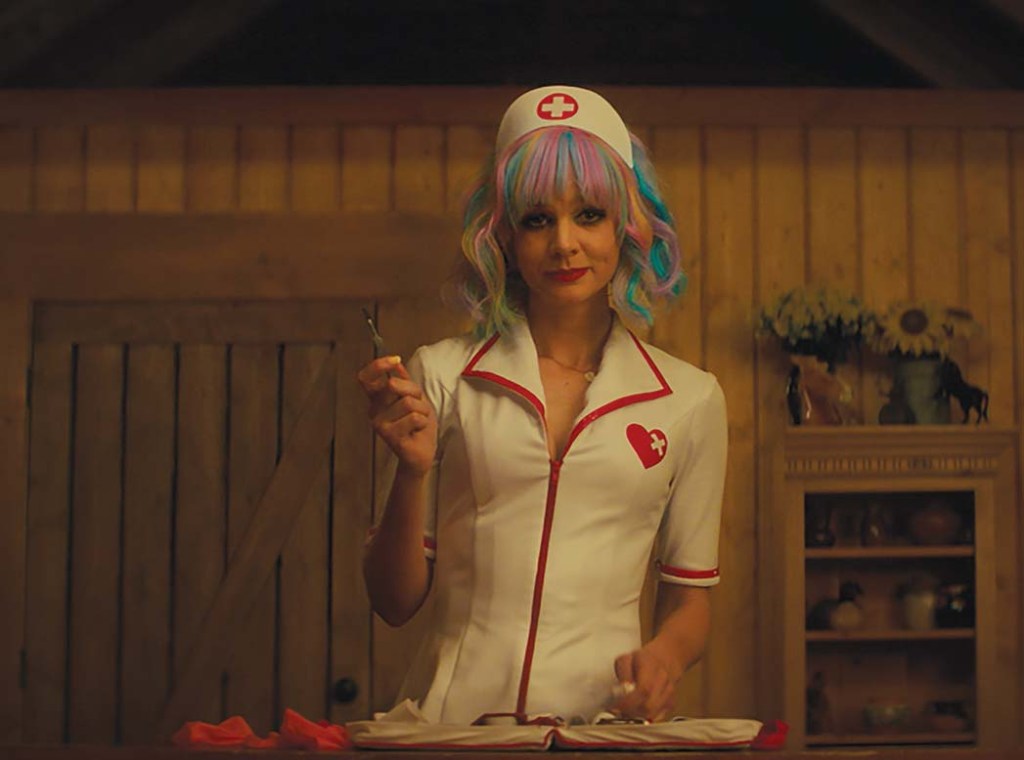 At the same time, Fennell wasn’t interested in making “a film about a woman in a gray cardigan staring out of the window.” No, she wanted unbridled femininity oozing from her lead, from bright red lipstick to multicolored nails. Let people underestimate her, she reasoned. It was the dichotomy Cassie personified — appearing harmless and docile from the outside, but simmering with rage on the inside — that was at the very core of the film.

“Emerald always talked about the movie being a beautifully wrapped piece of candy,” says Mulligan, “except when you open it and put it in your mouth, you realize it’s full of poison.”

Fennell, who made her filmmaking debut with the short Careful How You Go, starring Phoebe Waller-Bridge, began pitching Promising Young Woman to potential buyers in 2017. Unsurprisingly, a dark comedy about rape was not for everyone.

“A lot of people had a very particular idea of how serious things ought to be discussed, so there was some resistance,” says Fennell. Others wanted to commercialize the movie, sanding down the edges to make it into the kind of revenge film Fennell was trying desperately to subvert. But the execs at LuckyChap, a production company that counts Margot Robbie as a principal, and later at FilmNation and Focus Features, understood exactly what she was trying to do and, even better, applauded it.

With backers in place, she could find her Cassie. Robbie, who was now on board as a producer, might have seemed like the obvious choice, which is exactly why she and Fennell never even considered it. “The most delightful thing about Promising Young Woman is that it takes you by surprise, and I just felt like I wouldn’t be that surprising — me doing these kinds of things with people’s perception of who I am and the characters that I’ve played,” Robbie recently told THR. “Carey Mulligan, however, is an actress that has this air of prestige around her. Throw her in Promising Young Woman and people’s minds get blown.” 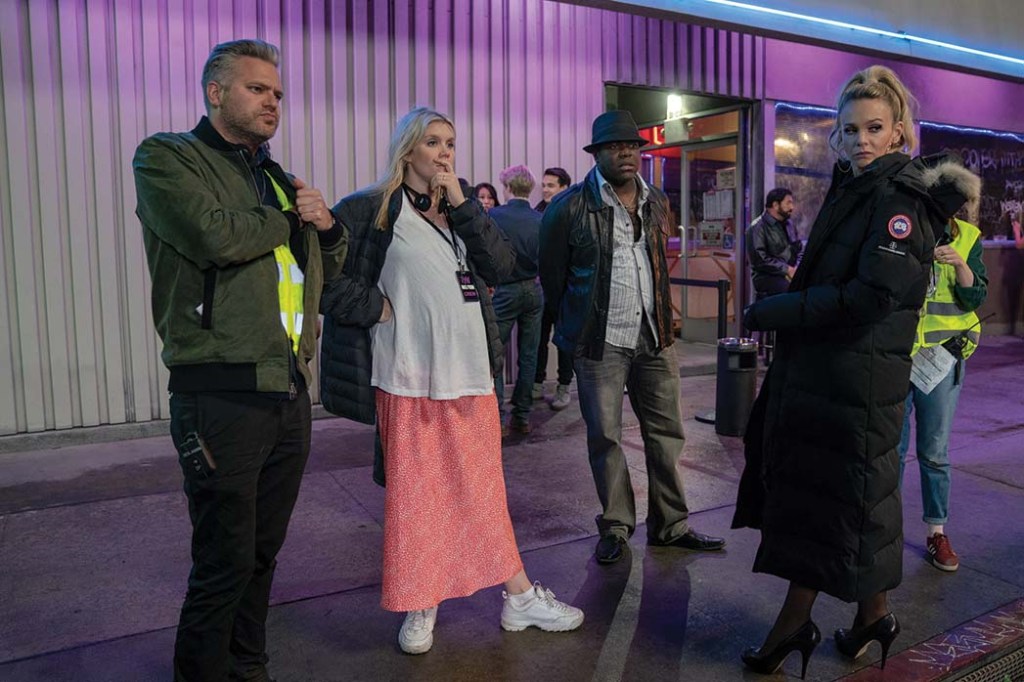 Mulligan, who’s best known for her period work in movies like An Education and The Great Gatsby, was at the top of Fennell’s list because she believed she could properly ground the role. “There is a temptation, particularly with female protagonists at the moment, to make them ‘badass’ and ‘whip-smart’ and all these sorts of things,” says Fennell. “And I really felt that Cassie needed to feel absolutely like a real person.” It was only later, some two weeks into filming, that Fennell would learn that she and Mulligan had worked together before. In fact, the two shared screen time in a 2006 episode of the British procedural Trial & Retribution. Mulligan played a murder victim and Fennell one of her friends.

As luck would have it, Mulligan wanted a break from all those period dramas. She didn’t know what exactly she was after until Promising Young Woman landed in her inbox. “I was completely floored by it and also terrified,” says the actress. “But I loved that it was funny and scary and sad and that Cassie was not inherently a likable protagonist who was doing everything right.” She couldn’t sign on fast enough. Soon after, Fennell sent over her neon-drenched mood board, which featured images from To Die For, The Virgin Suicides and Sweet Valley High, and a playlist of pop anthems from artists like Paris Hilton and Britney Spears that Fennell had on repeat as she wrote the script.

For the film’s coterie of poorly behaved men, Fennell knew she wanted actors who were known for playing the “nice guy” — Adam Brody of The O.C., Max Greenfield of New Girl, Chris Lowell of Veronica Mars. And for the more prominent role of Ryan, a charming former classmate turned pediatric surgeon who sweeps Mulligan’s character off her feet for a good portion of the movie, Fennell was convinced Burnham was the only choice. She needed someone audiences would buy as a more evolved leading man. That way, when she’d twist the knife later in the film, revealing — spoiler alert! — a more sinister side to him, viewers would be properly stunned.

Once Los Angeles was chosen as a filming location, Fennell was able to round out the cast with a slew of familiar faces, including Alison Brie, Laverne Cox, Connie Britton and Molly Shannon. “I don’t think that would’ve happened had we asked these people to get on a plane,” says producer Ben Browning of FilmNation. Since the script had called for a generic-looking town, they simply needed to avoid filming recognizable L.A. landmarks or accidentally catching a palm tree in the frame. 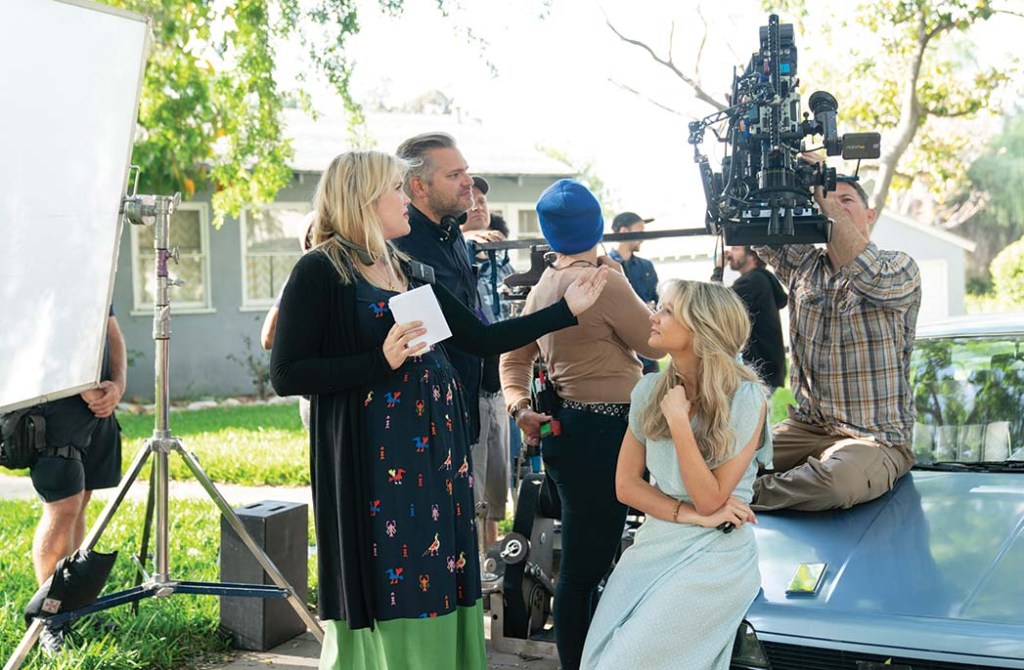 Cameras began rolling in spring 2019 for what was only a 23-day shoot. Budgetary constraints factored into the timeline, but so did Fennell’s pregnancy. The writer-director, who was in her third trimester at the time of filming, had informed the other producers a few months ahead of production. “We were all excited, of course, but, you know, shit got real,” says Browning. “Suddenly, we had a real biological imperative to get the movie done.”

Given the heaviness of some of the film’s subject matter, it became important to Fennell and her star that the mood on set be as light as possible. “We had fun,” says Mulligan, which is not to suggest that any of it was easy. In fact, having to repeatedly play drunk filled the actress with dread. “Here we go again,” she remembers thinking when she signed on, having had the experience on her 2018 film Wildlife. Then Fennell offered relief, explaining that Cassie is not actually drunk — she’s only playing drunk. And since Cassie’s also not an actor, it would be perfectly reasonable for her to do bad drunk acting.

Fennell had advice for the actors who came through to shoot the bar scenes (and their unnerving aftermath) as well. She told them to think of themselves as their own romantic leads in the film. “It was like, ‘This is the beginning of a romantic comedy and you’re the nice guy who just saved this girl from your skeezy friends and you’re going to sleep together and then you’re both going to wake up and — oops! — neither of you are going remember what happened last night,” says Fennell, describing the beginning of more than a few rom-coms.

But nothing would compare to the challenge of shooting one of the film’s final scenes, where Mulligan finally confronts her friend’s rapist (played by Lowell). The scene ends with a life-and-death struggle between Lowell’s character and Cassie. Mulligan easily could have used a body double, but — again, spoiler alert! — she insisted on filming her character’s death herself. (She’d later insist that she stay on set after her character’s demise, watching the others finish filming as if, she jokes, she were “a weird ghost.”) Mulligan and Lowell had been trained by stuntmen who’d helped choreograph the tricky scene, which involved him holding a pillow over her face for a staggering two and a half minutes without the camera cutting away. Turns out that’s how long it would realistically take to suffocate a woman, which Fennell learned from her father-in-law, an ex-cop. 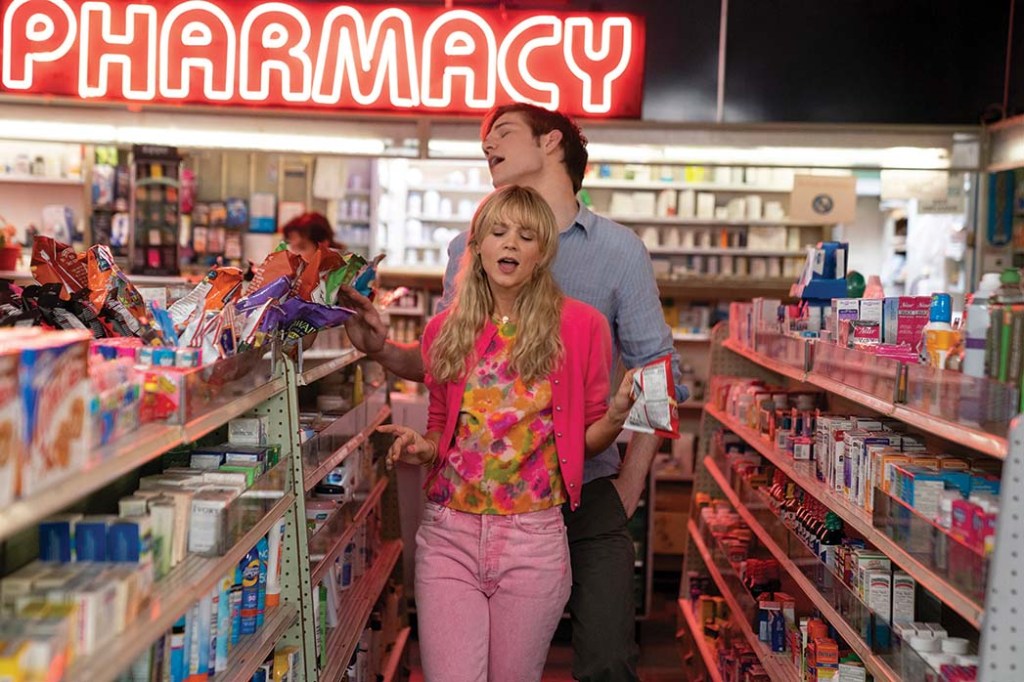 They did two takes without any issue and then, on the third, Mulligan mistimed when she was supposed to move her face to the side. Suddenly, she found herself unable to breathe. “I was like, ‘Oh fuck, I can’t get out of it,’ and I started feeling a little bit panicked,” she says. She ultimately threw up a hand signal, letting Fennell know they needed to cut, and then burst into tears. Fennell recounts the experience with horror too: “I just remember looking around, and everyone in the crew, every single person, just had hands over their mouth.”

Three weeks after Promising Young Woman wrapped, Fennell gave birth to a baby boy. Her other baby made its debut at Sundance a year ago this month, where it garnered widespread raves. Fennell didn’t know it then, but that Park City showing would be the only time she’d see it in a theater full of people. “And it was a film that we made so specifically to be watched communally,” she says, acknowledging just how much she’d wanted viewers to squirm in their seats, not knowing exactly whether they should be laughing or crying. Her hope now is that the film — which, care of the pandemic, had a limited theatrical release in late December before moving to premium video-on-demand earlier this month — still sparks conversation. “I hope they talk about it with people afterward,” says Fennell. “But I’d just be delighted if they watched it at all.”