Pete Docter felt something was missing in his life. The Pixar veteran had risen to the top of the animation world, having won Oscars for his innovative, heartfelt work in 2009’s Up and 2015’s Inside Out, but, he admits, he found himself thinking, “This isn’t really making everything all fulfilled and settled. It’s not like everything has come into place, even though I’m very lucky to have the success that I’ve been a part of at Pixar.” He began asking himself, “How am I living my life, or is there a way in which we should be living?” And as he pondered those questions, the spark behind his new feature, Soul, was ignited.

Pixar’s 23rd animated feature — because of the pandemic, the $150 million production skipped theaters, debuting Christmas Day on Disney+ — stars Jamie Foxx as the studio’s first Black protagonist, Joe Gardner, a middle school band teacher in Harlem who aspires to be a professional player in a jazz band. When Joe accidentally dies on the day of his big break, he enters a spiritual realm. There, he meets the personifications of human souls yet to be born as he explores the world of the Great Before, desperate to find a way to return back to Earth.

Initially, Joe was conceived not as a jazz musician but as an aspiring actor who gets his big break starring in a revival of Death of a Salesman, says Mike Jones, who helped develop the story with Docter. But when they landed on the idea that the character would have a passion for jazz, they knew the character needed to be African American. Says Docter: “We didn’t set out to make an African American story. It grew organically out of the subject matter.” But he also knew they would need a lot of help, adding that “this was our first Black protagonist, and you know, Pixar has been cited in the past for a lack of diversity.” For starters, they reached out to Kemp Powers, the playwright who has yet another contender this awards season, One Night in Miami, which he adapted for the big screen from his own play. He joined the Soul team as a writer in the summer of 2018 and was given the additional role of co-director a year later. “There was an immediate connection with him,” producer Dana Murray remembers. “He related to Joe in so many ways. He was middle-aged, grew up in New York — he grew up in Brooklyn, but, you know, he says Brooklyn’s the better borough.” 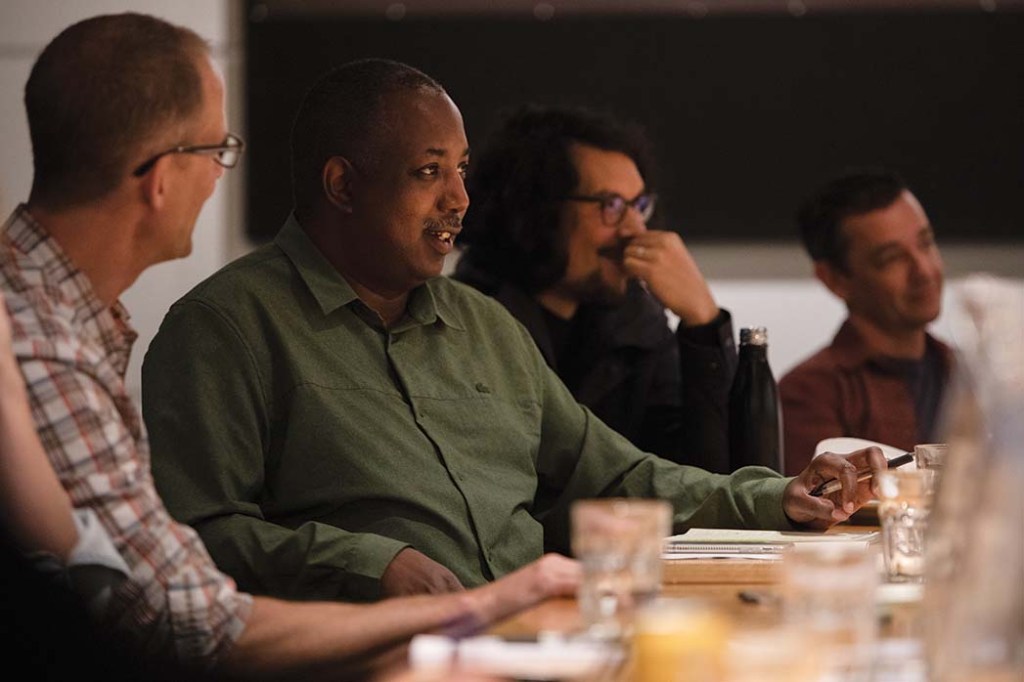 The production also recruited a larger team of consultants. “Our head of diversity and inclusion, Britta Wilson, is a great partner in helping us set up the cultural trust — that’s our internal trust at Pixar which consists of [an inclusive group including] Black employees,” says Murray. They also sought contributions from outside voices, including Jon Batiste, who wrote the jazz compositions featured in the movie, voice castmembers such as Daveed Diggs and Questlove, and Oscar-nominated cinematographer Bradford Young, who was a consultant on the film. 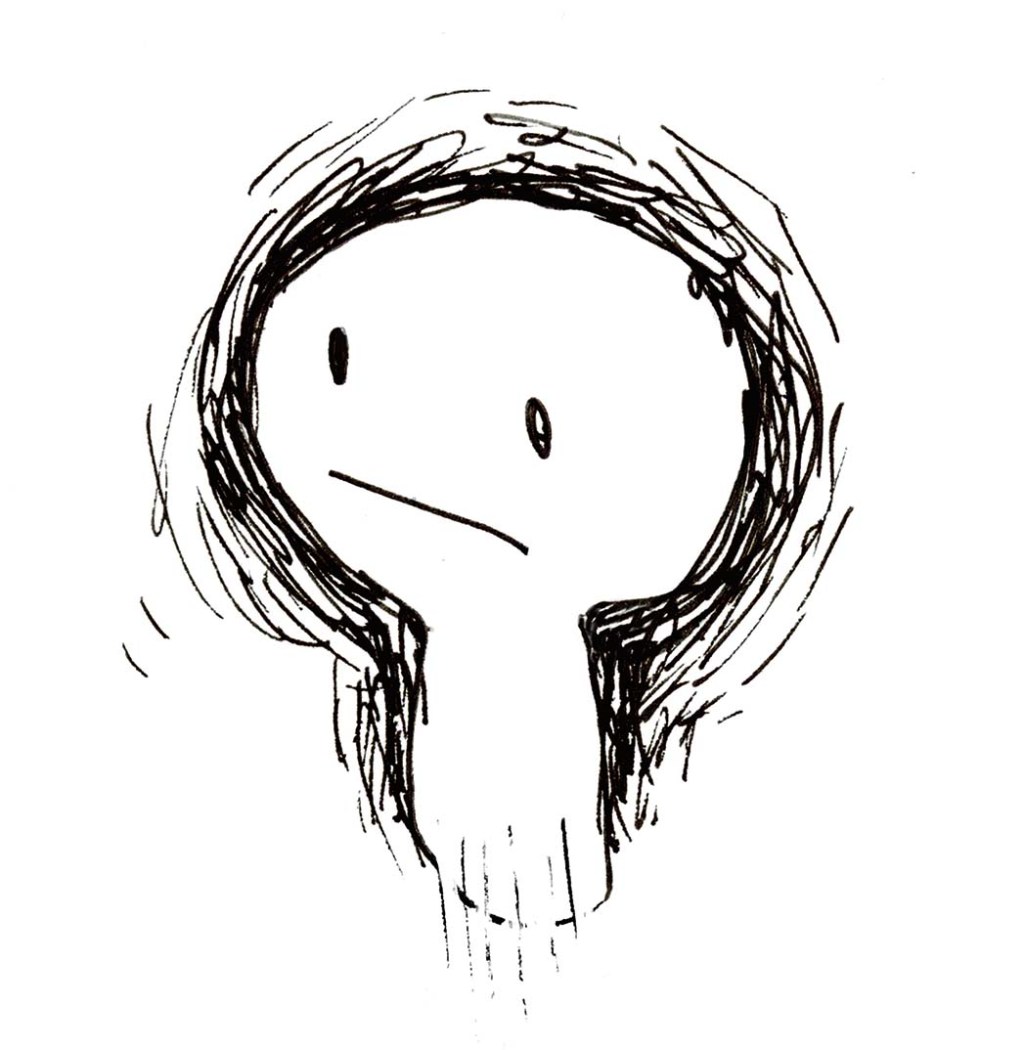 Docter says Foxx was the “obvious choice” to voice Joe. “He brings so much humor, and also he’s a musician and a pianist and actually went to music school. His voice just fit perfectly.” For his part, Foxx says he related to Joe’s joy in performing. “His dream is to one day play with [fictional jazz legend] Dorothea Williams,” he says. “It’s like a basketball player who wants to play in the Garden. I was born with a similar spark — I came out singing and telling jokes.”

In the film, Joe is assigned to help aimless soul 22, voiced by Tina Fey, find her spark. “Having a female voice felt right,” says Docter. “And we wanted somebody who could really be a kind of a snarky teenager, who’s kind of like, ‘Yeah, I know all this already.’ Tina’s incredibly intelligent, a smart writer and worked out perfectly.” 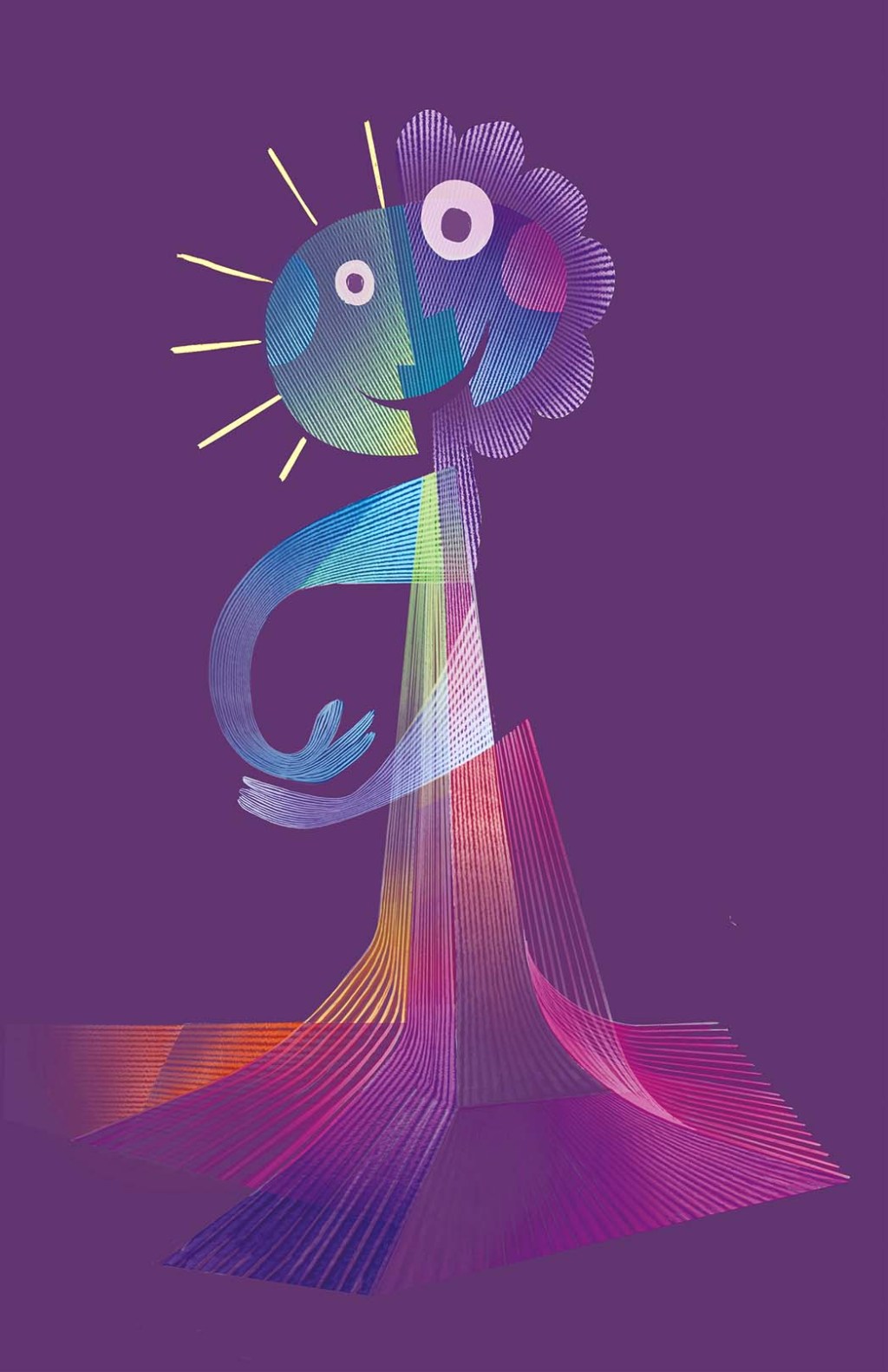 Adds Jones: “We came up with the idea that in order for these two souls to really discover what it means to live that fulfilled life, they need to go to Earth, and Joe needs to see somebody live his life as it is, and 22 needs to live the life that Joe feels is rather mediocre, not fulfilled. Once we hit upon that, the foundation was laid.”

The fantasy aspect of the film presented a sizable challenge, and to tackle it, Docter leaned heavily on what he learned making Inside Out — largely set inside the mind of a young girl, peopled by characters representing emotions from joy to anger. “There were a lot of very abstract ideas,” he says. “And the thing that we learned was that you have to make it physical, you have to show it through action and [be] visually clear. Like anger is a feeling, and we’ve heard from so many parents who have said, ‘My kids are able to talk now about their feelings because they’ve seen this guy who looks this way and acts this way.’

“Physicalizing things, it’s what animation does really well,” the director continues. “And it was a very clear directive from that film that we tried to apply in this one, that you can take these abstract ideas and bring them to life and really dramatize them.”

So the animators asked themselves, What should a soul look like? “We wanted to keep the souls pretty plain because it was in living that you would actually acquire the personality,” says character designer Daniel López Muñoz. “[The character] 22 is basically a circle with a little body attached to it and a little flick of hair on the top. But it’s the circle that carries most of her features. We [mimicked] a material that you can see through. It was in a way colorless and colorful because it could reflect light. We infused some line work into the character so that she would have a very diverse quality on her surface.”

As imagined by the Pixar team, the Great Before includes Personality Pavilions, individual buildings where new souls go to receive their personalities (Aloof Pavilion looks like a nose pointed up in the air); the Hall of You, a museum-like space where mentors share their life experiences with new souls; and the Hall of Everything, a collection of everything on Earth that inspires new souls in search of their spark (look closely for Easter eggs in this environment, such as Pixar’s Pizza Planet truck).

To prepare them for a world where the souls would one day live, production designer Steve Pilcher says the Great Before had to be simple — “but it can’t be so simple that it doesn’t have sophistication to it.” 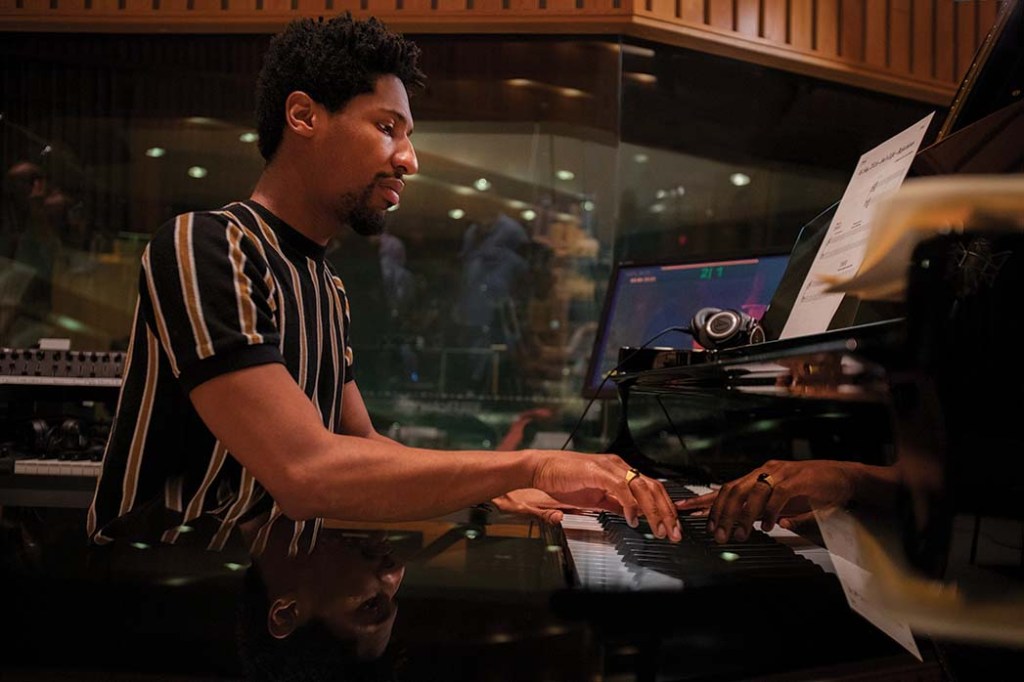 In contrast, the movie’s New York setting offers a vibrant, realistically detailed environment. The filmmakers visited jazz clubs such as the Blue Note and late night pizza stops like Two Boots for inspiration. Powers brought in details to scenes like those set in the barbershop — “the longest relationship you have outside of your partner, your wife or your kids might be your barber,” he says. And in a subway scene there’s even a Hitchcock-like appearance by a character resembling Pixar regular John Ratzenberger.

With music playing such a key role in the film, Batiste composed original jazz compositions for the New York scenes, while composers Trent Reznor and Atticus Ross provided a score offering a contrast between the real world and the Great Before. “Most of the initial discussions were about these various different ethereal realms and what they might feel like and what they might look like,” says Reznor. 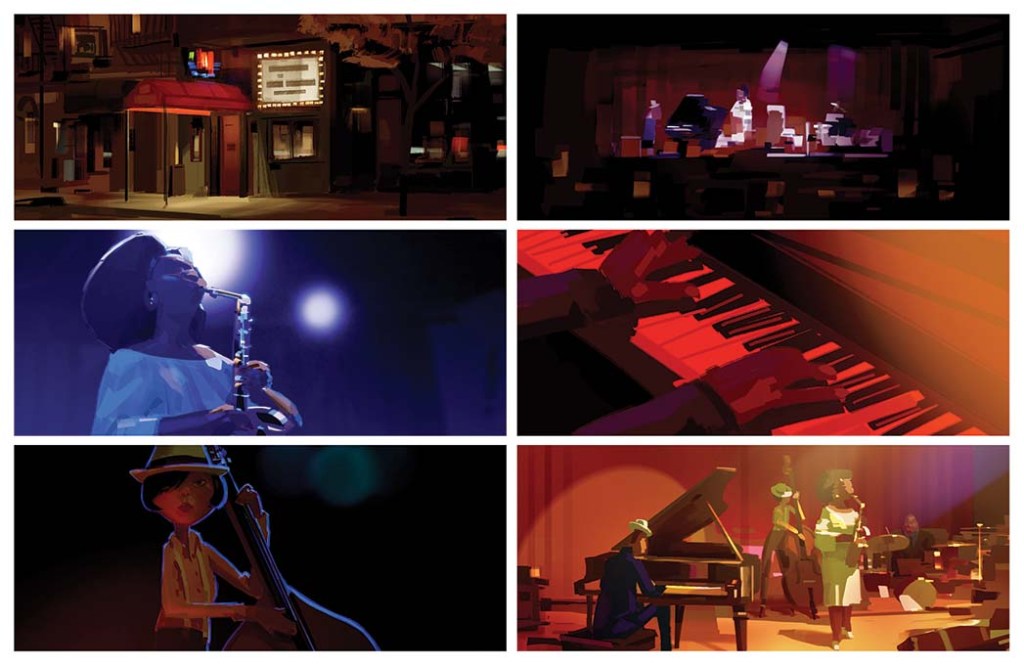 Joe enters the afterlife on a walkway, with a musical cue that Ross says was written to be “somewhat ominous, but it shouldn’t be terrifying [and] also shouldn’t be too comfortable or too pleasant because there is a question of, ‘Am I dead?’ We thought as a general approach if we made [the Great Before] sound kind of like everything, it should sound familiar, it should sound foreign, it should have real-world sounds as part of the DNA.”

In the end of what began as a very personal quest, Docter, 52, who would be promoted to Pixar chief creative officer during the production, discovered a lot of himself in Joe, who’s tall and lanky like Docter himself. Testifies López Muñoz: “I don’t know if that was a deciding element for Pete, but it helped the team at least because they know Pete. He can be very serious, but at the same time he can be very comical.”

Reanimating Pixar: How Pete Docter Steered the Studio Out of Scandal