[This story contains spoilers for episode four of The Mandalorian, “Sanctuary.”]

There’s a new soldier in town, and her name is Cara Dune. Episode four of The Mandalorian, “Sanctuary,” directed by Bryce Dallas Howard, finds the Mandalorian (Pedro Pascal) and Baby Yoda seeking refuge on a new planet, Sorgan, in the Outer Rim, one seemingly safe from the Bounty Hunter’s Guild and the remnants of the Empire. In terms of scale, the fourth episode is the biggest of the series so far, with writer Jon Favreau and director Howard taking a page from Akira Kurosawa’s Seven Samurai (1954). But instead of seven warriors helping farmers protect their land from bandits, there are only two: the Mandalorian and former Rebel soldier Cara Dune (Gina Carano). The odds appear to be against them, but Han Solo’s famous quote seems applicable here: “Never tell me the odds.”

While we’ve gotten a sense in the previous three episodes about what members of the deposed Imperial Command are up to, at least in terms of it being mysterious and nothing good, we haven’t gotten a strong sense of where the New Republic stands in all of this. Cara Dune, who at first finds herself at odds with the Mandalorian when he suspects she might be a bounty hunter, and thoroughly kicks his ass, sheds some light on the situation. Although there’s no shortage of dark-haired leading ladies in Star Wars, Cara Dune immediately sets herself apart from characters like Leia (Carrie Fisher), Padme (Natalie Portman), Rey (Daisy Ridley), Jyn Erso (Felicity Jones), Rose Tico (Kelly Marie Tran) and Qi’ra (Emilia Clarke). She’s not a politician, a spy, a Jedi or a reluctant leader. 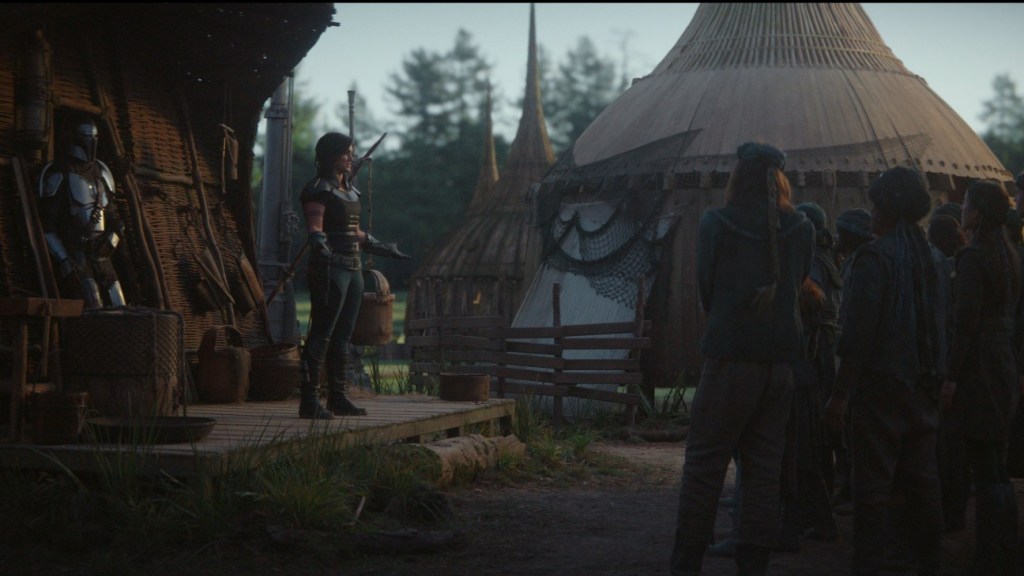 The human women of Star Wars, as distinct and engaging as they each are, are not infrequently tasked with proving themselves among their male counterparts, with refined skills that ensure their survival in a galaxy that seems to have an overabundance of men. Dune immediately dispenses with these prior notions with a physicality and presence that exudes the kind of battle-hardened blunt force we typically see reserved for male characters in this franchise, or at least for female Force users. This may not be a surprise for those who have followed Carano’s career, but it does feel unique within the canon of live-action Star Wars heroes. Undoubtedly having a woman director, the second in the history of Star Wars‘ live-action properties following Deborah Chow in the previous episode, underscores Dune’s distinction. But beyond being the galaxy’s very own Rambo, Dune’s role also broadens our look at the political and social situation of the galaxy.

After the fall of the Empire, rebel soldiers like Dune were tasked as bodyguards and security forces for the politicians who made up the New Republic. That not having been the job she signed up for when she sided with the Rebellion, Dune left to seek out adventure and conflict as a mercenary along the fringes of the galaxy. One of the core themes of The Mandalorian has been displacement. The list of characters without a home, or who have found their homes in jeopardy, continues to grow. And while the collapse of the Empire was a good and necessary thing, it has created a power vacuum in the far reaches of space, and there is a certain lawlessness that lends itself well to the unsubtle parallels drawn between the galaxy at this stage and the American West during the construction of railroads.

Return of the Jedi (1983) leaves off on a note of victory, and a sense of balance. But it has become increasingly clear through The Mandalorian that this wasn’t the case. If Imperial officers were displaced, then so were rebel soldiers, now left without a war to fight. Dune is, seemingly, a soldier through and through, and has found herself without a war to fight and eagerly anticipating the next battle. It would seem, at least going by her perspective, that the New Republic didn’t exactly have the best response in terms of how to employ its army after the war, or how to look outside of the Core and into the Outer Rim. This concern with politics and policies is what led to the collapse of the Republic following the Clone Wars. And given the Imperial threat rearing its head, complete with an AT-ST that gives a good fight in this episode, and the seeming lack of awareness or concern from the New Republic, it’s easy to see the road through which these stragglers banded together to form the First Order.

Beyond the direct political perspective Cara Dune presents and the further variety she offers to the role of women in this franchise, she’s also the first character outside of the Mandalorian and Baby Yoda who feels like a substantial character with her own story and long-term potential. She feels like the kind of supporting character that Star Wars was built on all the way back in 1977. She’s not Han Solo in terms of personality or past, but in terms of having a storied past and an arc, she seems like a key piece to the makeshift team, and possible family, that the Mandalorian has given himself to in his decision to rescue Baby Yoda. Although she bids the Mandalorian and Baby Yoda farewell at the end of the episode, stills from the season suggest her return soon enough. (Carano herself has confirmed she is shooting season two currently.) And good thing too, because she might be the key to understanding how the New Republic allowed the First Order to become what it is by the time of the sequel trilogy.

Is Baby Yoda the Future of 'Star Wars'?

'The Mandalorian' and the Slower Pace of 'Star Wars'