To bring Jon Favreau’s Star Wars-themed The Mandalorian to Disney+, the VFX team combined a new virtual production pipeline with classic techniques used in the original Star Wars trilogy. That included the decision to forgo the CG character route and bring the adorable character called The Child — best known to fans as “Baby Yoda” — to the screen with the help of puppeteers.

Season one was shot at Manhattan Beach Studios, across three stages and the backlot. A large wraparound LED screen onstage displayed completed set extensions to enable the filmmakers to shoot scenes in camera. This virtual production system, which shared similarities with the one developed to make Favreau’s The Lion King, uses a real-time gaming engine (in this case, Epic’s Unreal Engine) to display the environments on the screen. “Wherever the camera moved, the background on the LED screen moved accordingly,” explains VFX supervisor Richard Bluff, of lead VFX house Industrial Light & Magic, adding that this was possible through the use of the real-time game engine combined with proprietary software developed at ILM.

The VFX house effectively created the environments that would typically be added in postproduction, but did so during preproduction, with input from department heads in cinematography and production design so that they could be ready for shooting. “A lot of the environments were built and modeled from scratch by artists on the computer,” Bluff explains. “Other times we went out and photographed a sky or landscape that appears as a backdrop behind CG geometry, or it was scanned data.”

He adds that before production started, “you would often have Jon Favreau, [director/executive producer] Dave Filoni, the DPs, VFX and production designer with the headsets scouting virtual locations. We could decide in the environment where we believed the physical stage would exist. Once those choices were made, the additional work was done to help visualize the lighting. Once that was achieved, it was turned over to ILM to take it to a photoreal, finished level [for filming].” 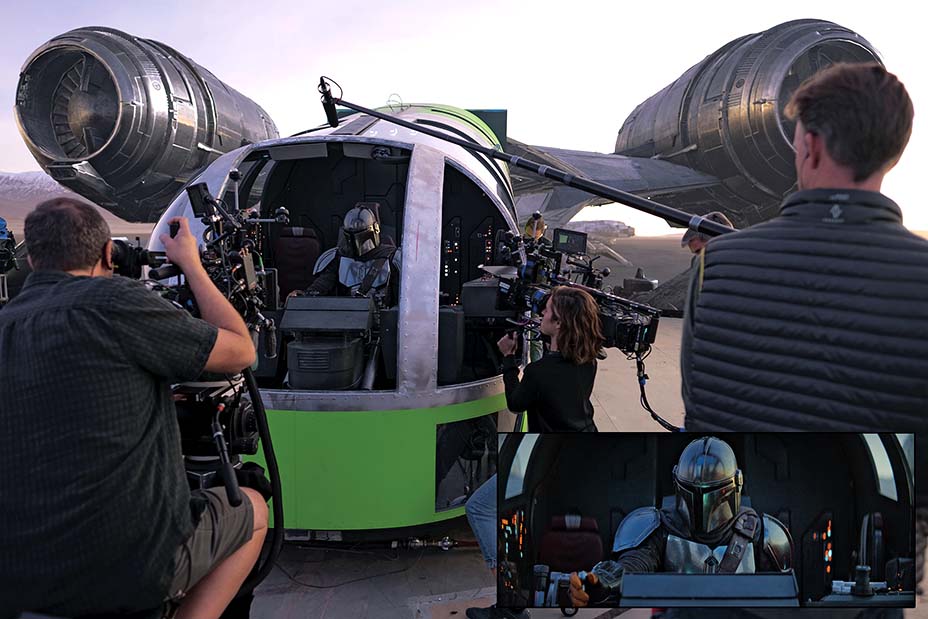 Character work ranged from the rhino-like CG Mudhorn to the breakout star, the wide-eyed Child, which started out as a planned reference puppet to give actors an eyeline on set. But in the end, a puppet built by Legacy Effects was used for most of the final shots. “We had two versions,” Bluff relates. “One was animatronic and required up to five puppeteers if we had to move the eyes, head and arms.” The other was a “stuffy” that could be held in the background when it was out of focus.

Additionally, a fully CG version of the character was created at ILM for “the rare occasion that we needed CG for the performance. It had to match the puppet exactly.

“We were all taken aback by how well he was received,” Bluff says of Baby Yoda, adding that the cast and crew were enamored of The Child even before the series debuted.

Another way the team captured the “handmade” look and feel of the original Star Wars saga was the use of miniature spaceships, shot with a new motion-control rig developed by ILM VFX supervisor and chief creative officer John Knoll. “We felt it would give us the charm of the original movie.”

The Netflix drama’s third season includes a heartbreaking episode centering on the 1966 collapse of a coal-mine spoil tip, or mountain of waste, in Aberfan, Wales, which claimed the lives of 144 residents, mostly children. Some live action was filmed in Wales, and additional scenes used greenscreen and were shot on a set at Elstree Studios in London. VFX supervisor Ben Turner says the team studied archival material and topography to simulate the slide and scenes of the aftermath.

The Showtime drama’s final season was primarily set in Kabul, Afghanistan, but many of the live-action scenes were filmed in and around Morocco. The VFX team added a “wraparound view” of Kabul’s defining mountain range to the shots, explains senior VFX supervisor Rocco Passionino of Zoic Studios, the lead VFX house for the series. A splinter unit in Kabul shot a series of images of the mountains, and Zoic Studios stitched together the footage, enhancing it with matte paintings.

The Man in the High Castle

The finale of Amazon’s alternate history series includes an attack on an armored train. The base of the track was built, then CG was used to complete the track, create the train and depict its destruction. “We had a digital vehicle that had to be built [inside and out] in a way that was destructible,” explains Lawson Deming, senior VFX supervisor at Barnstorm. “Because when it flipped, it had to be destroyed.” Interior shots were filmed on a moving platform with an LED background

On the Set of 'The Mandalorian': How Jon Favreau Brought the First 'Star Wars' Live-Action TV Series to Screen