June is Pride Month, and this year sees something new in terms of how comic book publishers are participating in the event, with both DC and Marvel releasing extra-length anthologies showcasing LGBTQIA+ talent and creators for the first time in an attempt to highlight each company’s commitment to diversity.

As unlikely as it may seem, the decision by both companies to release Pride specials for the first time in the same year isn’t a continuation of the ongoing slugfest between the two biggest comic publishers, but a coincidence brought on by editorial forces inside both DC and Marvel pushing to increase diversity in each company’s output.

“Every year is the right time for a DC Pride anthology,” DC editor-in-chief Marie Javins tells The Hollywood Reporter, “but cultural moments like Pride and AAPI Heritage months are ideal opportunities to get energy behind stories in the Pride anthology or [May release] DC’s Festival of Heroes — they’re on everyone’s radar already, leading to creativity and excitement.”

Heat Vision Download: What to Watch, Play and Read in June

The 88-page Marvel’s Voices: Pride has its roots in the Marvel’s Voices program, which launched as a podcast in 2018. That expanded a one-off anthology in 2020, and this year into a number of standalone anthologies, each spotlighting different groups, starting with Marvel’s Voices: Indigenous Voices in November 2020 and February’s Marvel’s Voices: Legacy, timed to Black History Month.

“So in a sense, Marvel’s Voices: Pride was sort of inevitable,” says editor Sarah Brunstad. “We were seeing this desire for untold stories and Pride was a natural next step. We knew pretty early on that we’d do a Pride anthology.”

The release is, Brunstad explains, “both a showcase and a celebration, with a mix of new and established talent, so it was a little bit of a balancing act to make sure everyone got to do something unique and personal.”

That includes using creators who hadn’t previously worked for the publisher.

“I tried to get a mix of people I would call ‘icons,’ like Allan Heinberg and Kieron Gillen — never mind their blushes, I can see them now — along with people who would be new to the mainstream comics fans, like Claudia Aguirre and Jen Hickman. Those were people I’d been keeping track of for quite a while, and getting to debut them in Pride was really special,” Brunstad says.

The 80-page DC Pride anthology also mixes established and upcoming talent, including James Tynion IV, Mariko Tamaki, Vita Ayala and Rachael Stott. According to DC senior editor Chris Conroy, the project “honestly just came down to folks in the company standing up and saying ‘We want to do this, and we see a fun way to do this, here’s a plan.'”

“It takes individuals like Andrea Shea, the remarkably talented lead editor on DC Pride, to bring people together across departments and disciplines to come up with a plan,” DC editor-in-chief Javins says. “I’m delighted and proud of the work our writers, artists, and editors are doing to expand the DC Multiverse with these new stories keyed to cultural moments, as well as their efforts to honor the characters and stories that have come before.”

“It doesn’t hurt that we’ve got more LGBTQIA+ folks working here at DC than we’ve ever had before, which means more voices and more expertise,” Conroy adds. “I started at DC in 2005, and it’s been really, really gratifying to see this community grow here.”

Stories in the DC Pride issue were handled by different editors, in close communication with each other to avoid overlap.

“Editorially, we knew we’d want stories with our earliest, pioneering queer characters, Extraño and Pied Piper, and that we’d want to highlight our newest creations as well, like Dreamer,” Conroy says. “Sometimes talent told us what they wanted to do, and sometimes we came to them with a pairing we were hoping for. Pretty much everybody we talked to was an enthusiastic yes, and pretty much everyone got to play with the characters they love, too — it’s nice when things just click, it was really smooth sailing all the way through.”

Dreamer — the Supergirl character played by Nicole Maines in the CW’s Supergirl — actually makes two appearances in the issue; in addition to her comic strip debut (written by Maines herself), she is also one of a number of LGBTQIA+ characters from DC’s television series to feature in profiles featuring comments from the actors who play them onscreen. The decision to include such features, Conroy explains, is “to demonstrate that when you do great work in comics, and you prove to people that these really compelling, complicated queer stories have an enormous amount of life in them, then you’re going to reap the benefits of that kind of storytelling in other mediums.”

Marvel’s special features no such profiles (to date, there is a paucity of queer characters in the MCU), but the publisher instead offers reprints of significant panels in the queer history of the company’s publishing enterprises, including 1992’s Alpha Flight No. 106, in which the hero Northstar comes out, becoming the company’s first out character.

Northstar’s announcement came a year after DC first had a character reveal themselves to be gay — villain-turned-hero, the Pied Piper, who came out in 1991’s The Flash No. 53 — although it had been years since the introduction of Extraño, a gay hero who wasn’t able to use the term to describe himself for decades, who debuted in DC’s 1988 miniseries Millennium. The publisher was also introducing trans and gender non-comforming characters around the same period. Rebis debuted in 1989’s Doom Patrol No. 19, and Legion of Super-Heroes revealed that long-running supporting character Shvaughn Erin in 1992’s Legion of Super-Heroes No. 32.

“One of the things that I love most about DC’s Pride initiative is that it’s not just about doing new material, to make up for a lack of representation — we’ve got a deep backlist of LGBTQIA+ storytelling that’s ready and waiting for readers, and this initiative can elevate it,” Conroy says. “When we announced the one-shot and offered it for sale, we made a point of also highlighting a selection of library titles like Batwoman: Elegy and Suicide Squad: Bad Blood, or our Young Readers titles Harley Quinn: Breaking Glass, Poison Ivy: Thorns, ad You Brought Me The Ocean. It goes way beyond even the titles we highlighted there; series like Sandman were breaking ground in this regard all the way back to the 1980s.” 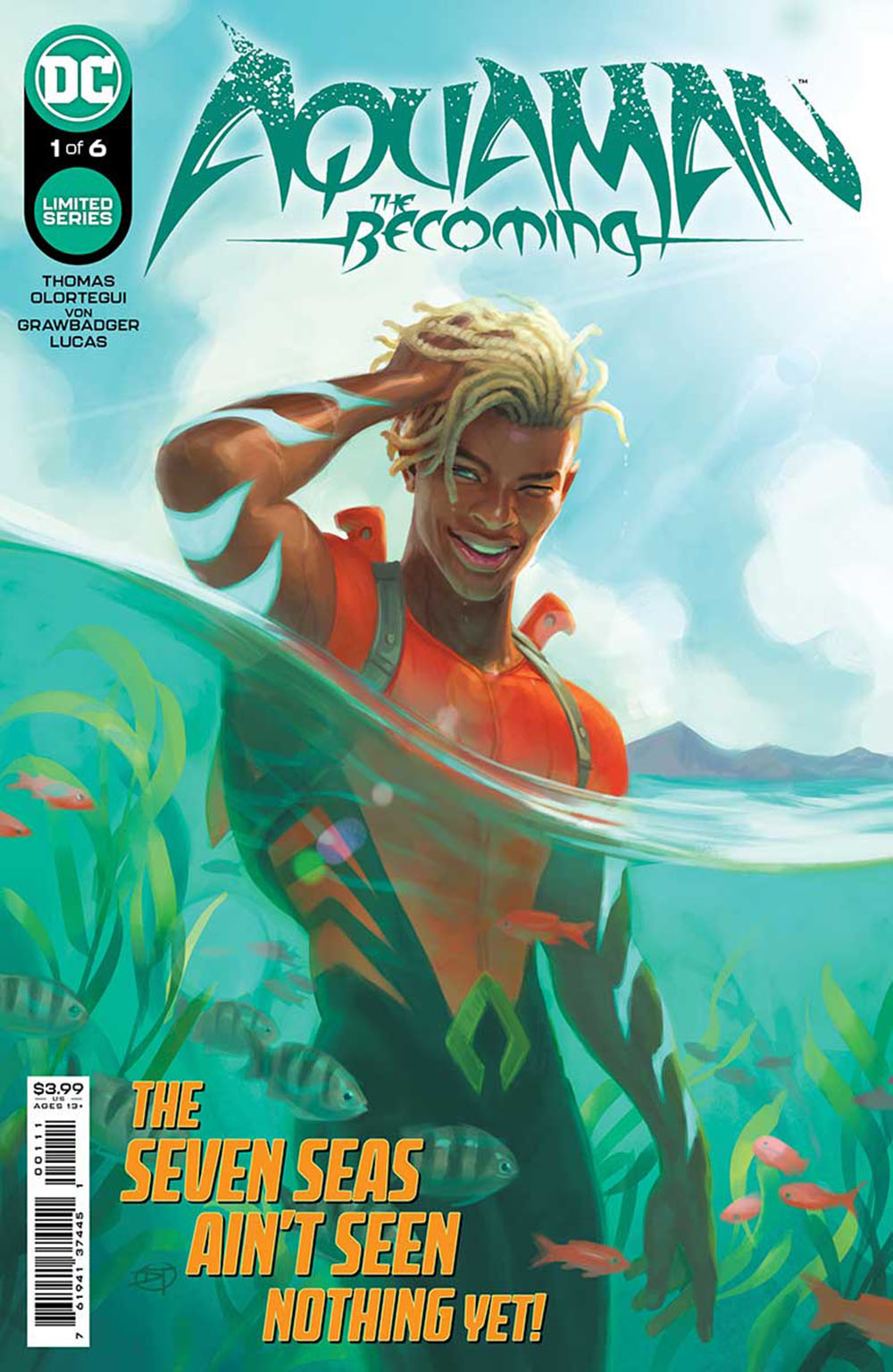 Indeed, DC’s Pride anthology is just one in a number of releases tied to the DC Pride label; the miniseries Crush & Lobo launched last week, and it will be joined in September by Aquaman: The Becoming, a new series by Brandon Thomas and Diego Olortegui, with covers by David Talaski, and starring Jackson Hyde, who’s previously appeared in earlier Aquaman comics as well as the Young Justice animated series. (THR can exclusively reveal the cover, above.)

“DC also has The Low, Low Woods and Exit Stage Left: The Snagglepuss Chronicles for readers who are not necessarily looking for DC’s superheroes but are still looking for great stories with LGBTQIA+ characters,” Javins points out. “These books didn’t publish in June, but Pride Month is a great time to introduce them to a new audience. We want readers to pick up books like The Other History of the DC Universe or Batman at any point in the year and read stories featuring Black characters, Asian, LGBTQIA+, and more within the pages, because great inclusive stories are not limited to cultural moments.”

At Marvel, there’s no such attempt to co-ordinate or brand LGBTQIA+ content, although sources close to the publisher point to the Black Cat series — featuring the former Spider-Man villain who has recently been revealed to be bisexual — and the upcoming United States of Captain America miniseries as featuring future queer content, alongside the Star Wars and X-Men franchises, both of which feature LGBTQIA+ characters — although, ironically, the X-Factor series which features Marvel’s first openly gay hero Northstar is cancelled with this month’s issue.

Response to the two publishers’ efforts has been mixed; DC’s Pride initiative has been generally well-received, with the June 8 release of the Pride anthology seeing the title described as being a “joyous, emotional celebration of the LGBTQIA+ community”, and offering readers the opportunity to see themselves on the page in a way they, sadly, are rarely able to. While the announcement of Marvel’s anthology was similarly applauded, preview pages have been criticized for language surrounding trans characters, even as the apparent removal of Loki from Pride branding has raised fan concerns.