To be a hero, one doesn’t necessarily have to wield a mythical hammer or fire photonic blasts from their hands. A hero’s superpower can just as easily be making a positive difference in the world they live in. Marvel Entertainment hopes to show this through the Disney+ series Marvel’s Hero Project, which will share stories of 20 kids across the country who are just as heroic as those they’ve looked up to in comics and onscreen.

Premiering Nov. 12 when Disney+ launches, each week the company’s first non-scripted reality series will follow the journeys of young heroes, culminating with Marvel sharing their stories through a custom comic book that places these kids into the Marvel Universe. (Comics will be available digitally for free after each episode airs on Marvel Unlimited and the Marvel Digital Comics Store.)

“All of these kids exhibited traits and the features that make a classic Marvel superhero,” Sarah Amos, vp development at Marvel Entertainment, tells The Hollywood Reporter.

“Seeing these kids light up when they see themselves on a cover made the entire project worth it,” says Steve Wacker, vp creative and content development at Marvel. 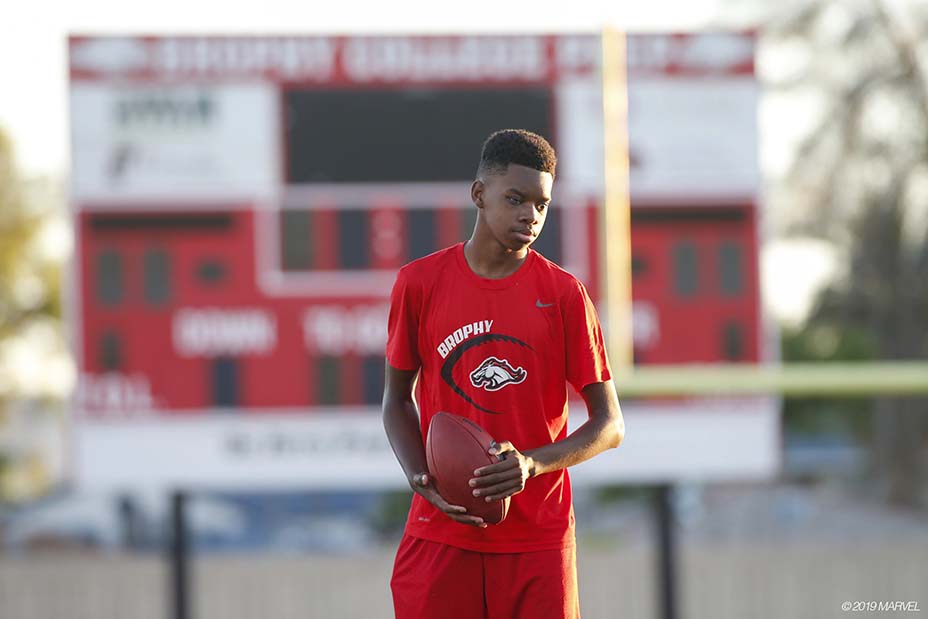 Coming from a passionately athletic family, Adonis Watt’s eagerness to get in the game and play football began at an early age. It has never waned, even after he lost his eye sight at age 5 and was diagnosed with a rare condition of congenital glaucoma. What could have been a threat to his athletic dreams transformed into an opportunity for both Adonis and his family.

As his mother Veronica Watt, a former NFL cheerleader, tells THR, “He would not let it go. People ask me, ‘Are you afraid that he plays football?’ and I say, ‘I would be afraid if he came to me and said, “I don’t want to play.” Then I would be scared.'”

Adonis made national headlines in September 2018 by scoring two touchdowns as his high school’s running back. While humble about his achievements, the athlete tells THR that his motivation to stay on the field comes from his “love for the game.”

As for joining Black Panther and Iron Man in the Marvel Universe? “It’s cool that Marvel decided to pick real kids out here … and make them public figures,” Adonis says.

Adonis’ comic features the 15-year-old as as the “Unstoppable Adonis” who has both athletic strength and increased senses. Marvel also ensured Adonis could take in his story by printing his comic in braille.

“It’s the first time we’ve ever done a full-length story in braille,” Wacker tells THR. “That was certainly a moment that felt special for us.” 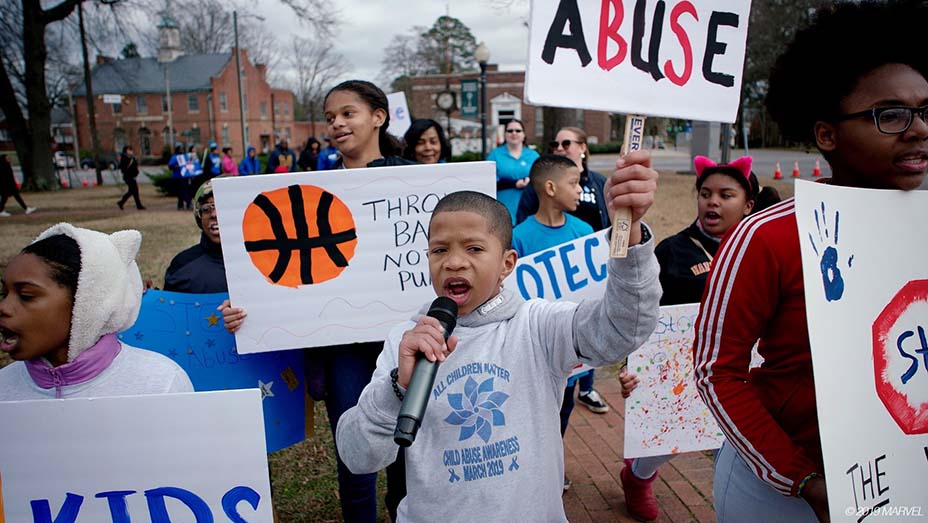 Becoming a social activist could seem challenging for an 11-year-old, but Elijah Lee took on that challenge after learning a classmate had suffered abuse.

This has led to him hosting sermons and organizing child abuse awareness marches in his hometown of Roanoke Rapids, North Carolina. State Senator Erica Smith has attended an event organized by the young activist. “I really wanted kids to understand that no matter where you come from, you can still make a change,” Elijah says.

“There is nothing about Elijah that doesn’t make you smile,” Amos adds. “He is a kid who truly understands his purpose and is here to help other people. He has such compassion and a light inside of him.”

That light is vibrantly portrayed in Elijah’s dedicated Marvel comic, in which the youthful activist is turned into a “human torch” who brightens any room with his motivational words and positive outlook.

“I really love the details of the comic,” Elijah says. “The front cover has me with a yellow light behind me. That really meant a lot to me because it showed I’m a kid who has empathy for things, who sees when there’s a problem. … That helped me understand that you don’t have to have super strength or a magical hammer to be a superhero.”

When asked what he thought of Marvel’s Hero Project and the possibility that other children could follow in his social justice footsteps, Elijah says, “That really is an amazing feeling. All of the kids on the show, including myself, our main goal with doing these big things is not only to bring awareness … but to help inspire other kids. We’ve all had obstacles but no matter what, you can make change.”

“I feel like because I’m different, I have the ability to teach people,” says 13-year-old Jordan Reeves in her episode on Marvel’s Hero Project.

Jordan gained national fame for her glitter-shooting prosthetic arm (appearing on shows like Shark Tank and The Rachael Ray Show). The invention, dubbed “Project Unicorn,” came about following a trip to a limb difference camp in San Francisco.

Jordan has since become an advocate for young children with limb differences, raising awareness and offering support through a non-profit she co-founded with her mother, Jen.

“I think the best part about it all is getting to meet people,” says Jordan, noting the favorite aspect of her work is “meeting the little kids” as well as having a community that helps and supports one another.

Marvel, inspired by Jordan’s inventiveness, illustrated a lab similar to the Black Panther character Shuri’s own setup in Wakanda. When looking over her honorary Marvel comic, Jordan says a friend of hers noted one unique detail.

“The mannequin that has my hero outfit also has a limb difference,” Jordan says, adding how excited she was to see she had her own “really cool, hideout lab.”

If she ever had such a lab in real life, Jordan explains she’d easily “come up with something to get rid of pollution.”

“Other than that, I’d make a lot of fun stuff,” she adds. “All I am trying to do is spread joy and positivity. That’s one of the big things that everyone can do.”