Whatever the box-office fate of The Meg — Warner Bros.’ $150 million summer shark tentpole — it’s been sold to the public over the last several months with tongue placed firmly in cheek.

Director Jon Turtletaub told The Hollywood Reporter in an interview that the goal was simple with the film: “I probably wanted to be a moviemaker because of Jaws, so truthfully, I set out to make the second-best shark movie of all time. And I hope we did it.”

The movie follows Jonas Taylor (Jason Statham), a rescue diver who’s still dealing with the emotional and professional fallout from an incident years ago where he aborted a mission after seeing what he said was a 70-foot shark. Now he’s pulled back into the water when his ex-wife and others are trapped underwater and he’s not the only one who’s seeing the giant prehistoric beast.

Here’s how the studio rolled out marketing for the film.

An aerial shot shows the gargantuan scale of the shark being hunted from above as dozens of people on the water scatter in their inflatable devices and small boats. Its size is meant to appear even larger than what’s seen by virtue of the decision to cut off the back half, making it look like the frame can’t even fully contain it. The pic’s tongue-in-cheek attitude is conveyed in the copy, which reads “Pleased to eat you.”

The next poster has the Meg as the apex predator, coming up from below to eat the regular-sized shark that’s trying to eat a diver who’s heading to the surface. “Chomp on this” is the tagline here.

After that is another poster that takes the perspective back to the air, this time showing a single figure on an inflatable raft as the Meg’s open mouth comes up from below the surface.

There were also posters showing Statham swimming away from the Meg’s giant gaping maw and one that shows the shark’s mouth biting down on some sort of capsule, a helpless human stuck inside.

For the exhibitor-specific posters, each one continues to emphasize the massive scale of the shark. On the Real 3D one-sheet, we seen its jaws in the background as a small dog tries desperately to swim away. A dog is also seen on the Dolby poster, but here we get a straight recreation of the Jaws one-sheet as the Meg approaches from beneath. The Imax poster has the shark breaking through the water as a small boy watches on the beach. 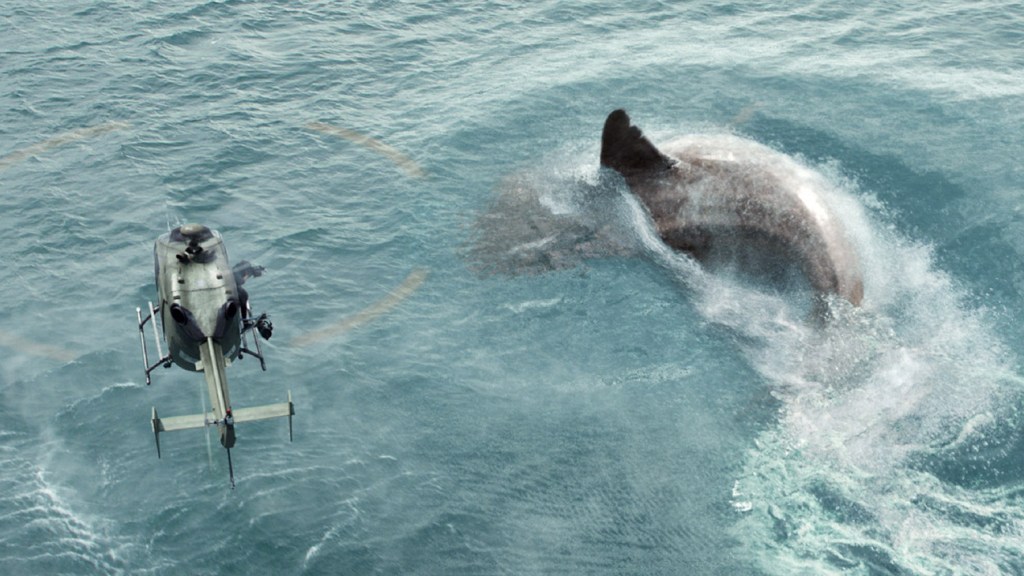 In April, we’re introduced to the monstrous shark in the trailer (20.3 million views on YouTube) when it hovers outside a huge window and scares a young girl by trying to bite through the glass. When everyone investigates and realizes the bite radius indicates a huge creature, they try to figure out what’s happening and what could have caused it. Eventually they realize it’s a megalodon that’s still alive and roaming the seas, threatening inhabited areas. So the team has to hunt it down and kill it — because that’s what humans do.

In June, Warner Bros. released an official “fan reaction” compilation (790,000 views on YouTube) showing people watching the trailer and talking about how they were going to be there on opening day to see the insanity that’s on display. That’s a clever attempt at tapping into the YouTube creator community by offering recognition of that community, as well as everyone else who shares their original videos there. 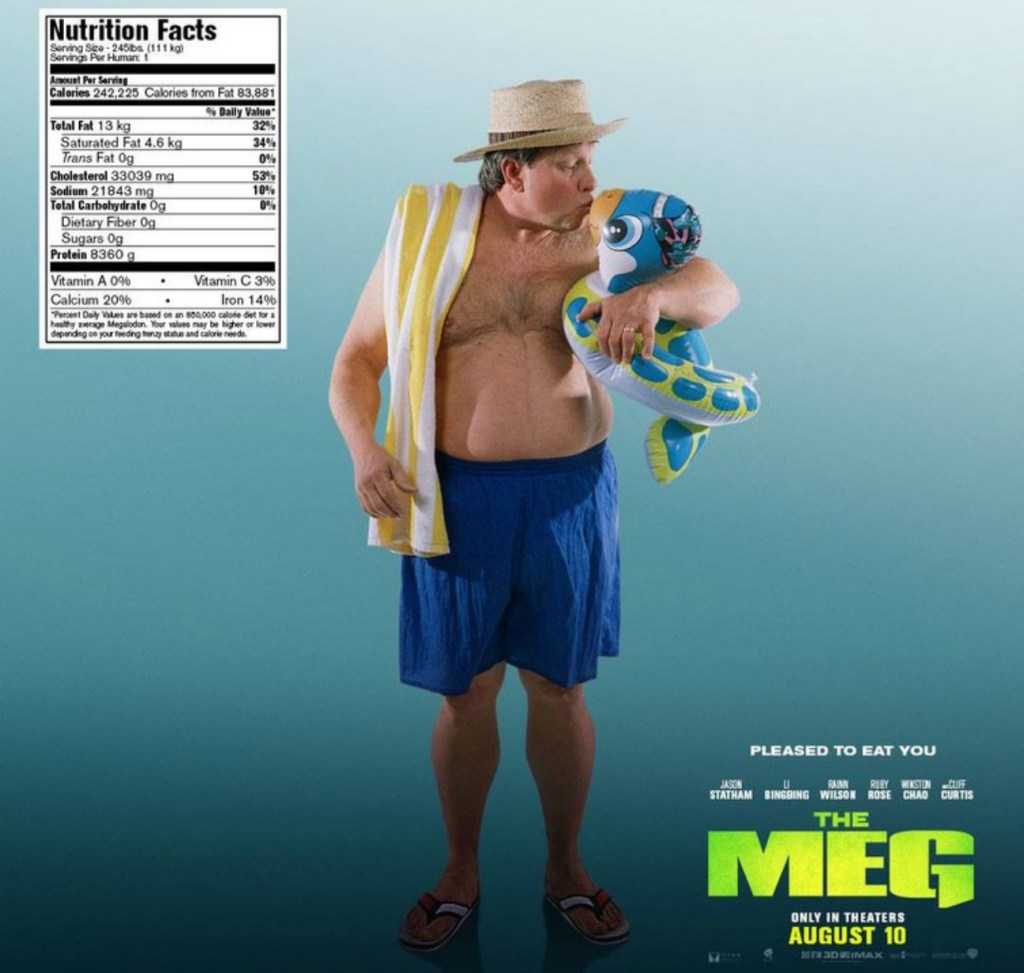 TV advertising began in late June with a spot titled “Carnage” that skipped some of the tongue-in-cheek humor of the full trailer and just sold the movie as the story of a giant prehistoric shark terrorizing beachgoers.

The pic was among those Warner Bros. promoted at San Diego Comic-Con by placing the name and key art on the bags given out to convention attendees. There was also a massive reproduction of the title shark’s gaping mouth that people could stand within and have their picture taken.

A series of promotional images used photos of beachgoers and swimmers of varying body types and placed “Nutrition Facts” labels next to them to make it clear they were very much on the menu for the massive shark.

In late July, a “submersive” VR experience was taken to select locations that allowed visitors to strap on a pair of goggles and head underwater with the creature. An online version of that experience was shared as a 360-degree video that viewers could swivel around to get a full look at the dangers lurking in the water. And theater standees let you get inside the beast’s jaws to take a picture.

In the days before release, The Meg was also advertised via pre-roll video on the popular HQ Trivia app. The promotion marked the first ad placed in the time before the episode of the game loads and was not skippable by the audience.

? Discovery, which helped create the VR experience as part of its promotions for its own VR app. The film was also given several shout-outs by the network during “Shark Week.”

? Johnny Rockets, which offered a “Movie Meg-a Meal” that was supported with a short commercial.

? Noovie, which offered an exclusive behind-the-scenes look at the pic that compared it to Jurassic Park and other “big creatures we thought were extinct” movies.

? Monster Jams, which created a new vehicle in conjunction with Discovery dubbed “The Megalodon” that toured stadiums.

This week, Warner Bros. hosted a special screening of The Meg on Lake Travis near Austin, Texas, complete with beach art and branded inner tubes for swimmers to use. 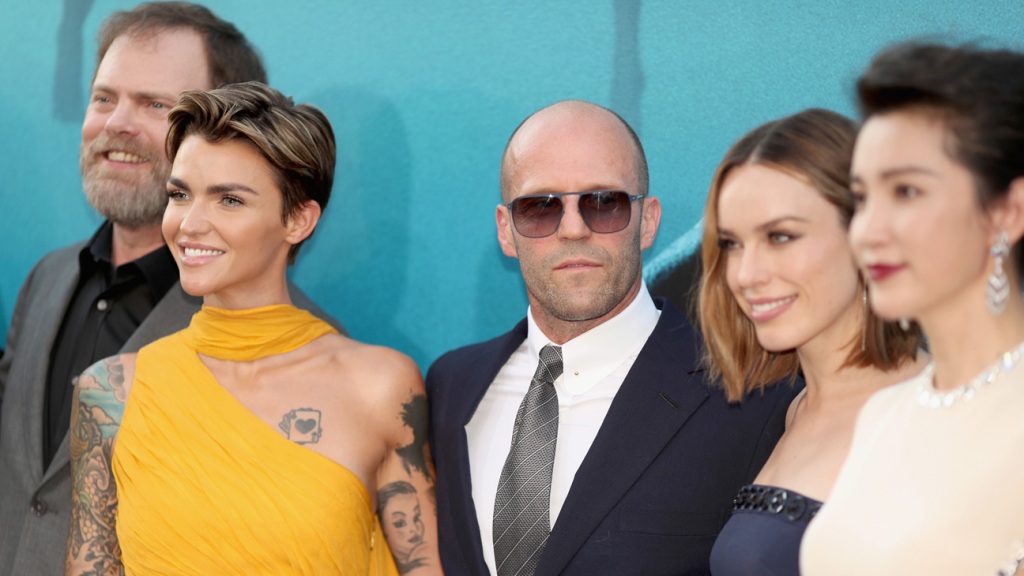 Warner Bros.’ marketing for The Meg seems to hark back to an era when summer movies were fun, sometimes even silly escapism. Based on the campaign, this is exactly the kind of product that fits the mold of a popcorn movie — something that you go see because the theater has air conditioning and looks like it might be kind of fun.

That tone more or less marks the end of the summer movie season as we get closer to younger audiences returning to school and studios clean out a few titles before moving into the more serious awards-season fare. There’s a pretty open field in terms of new releases, meaning The Meg will compete primarily against the third weekend of Mission: Impossible — Fallout, which continues to rack up strong showings.

How "Massive" Promotion Built 'Jaws' Into a Summer Blockbuster