In September 2017, four-time Oscar nominee and Golden Globe winner Michelle Williams shocked the Internet when reports surfaced that she was in talks to star alongside Tom Hardy in Venom. After all, just seven months earlier, Williams’ performance in Manchester by the Sea was being recognized at the 89th Academy Awards. With an acclaimed dramatic actor and arthouse luminary like Williams making the leap to the comic book genre, Venom suddenly had the curiosity and the attention of moviegoers who don’t frequent the theater for every entry in the genre.

The film also marked Williams’ first role following the birth of the #MeToo movement, and the star pushed to have her character, Anne Weying, reflect the current era.

“When we started making Venom, I said to the director, Ruben [Fleischer], that I know I can’t exactly wear a #MeToo T-shirt, but that’s the feeling that I want in this movie,” she tells The Hollywood Reporter. “There’s a scene where I came up with the line, ‘I love you, but I love myself more.’”

While Venom (opening Friday) is a surprise to just about everyone, Williams’ career trajectory has been headed in this direction since Manchester by the Sea. In July 2016, Williams joined Fox’s crowd-pleasing musical, The Greatest Showman, in order to cleanse her palate.

“After doing something like Blackbird on Broadway for six months, I needed to go do The Greatest Showman. It’s good for my brain to do something that works different aspects of myself,” she says.

In March 2017, Williams’ path toward the mainstream continued as she received top billing in Ridley Scott’s All the Money in the World. In May 2017, she was confirmed for a comedic supporting role in the STXfilms comedy I Feel Pretty. With Venom’s announcement a short while later, it became evident that Williams was ready to take on more studio films while challenging herself via new genres.

Below Williams sits down with THR and expands on her decision to join Venom, as well as the recent deviation in her career.

Most people would surmise that an actor of your caliber has been offered a myriad of comic book movie roles, especially in this current marketplace. Since Venom is your first comic book movie, what were the deciding factors that led to your commitment?

The truth of it is, it came down to Tom Hardy. He’s so talented and so committed. He also makes unusual choices in a moment-to-moment, scene-by-scene kind of way. So I thought that he would be an exciting guy to get into the ring with. I thought it would be fun to play with him, and it really was. 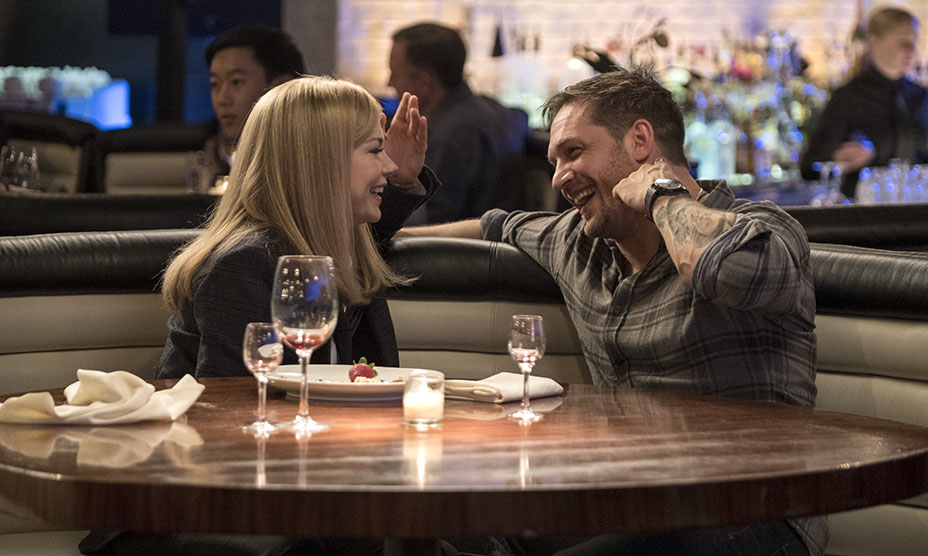 You’ve been an integral part of some of the best dramas since the mid-2000s. However, in 2018, you made a comedy, I Feel Pretty, and now a comic book movie in Venom. Were you looking to shock the palate, so to speak?

I wanted to see if I could expand my range a little bit, and also have some fun. The things that I truly love to do most are not fun, and a steady diet of them wouldn’t be good for me. After doing something like Blackbird on Broadway for six months, I needed to go do The Greatest Showman. It’s good for my brain to do something that works different aspects of myself. Making I Feel Pretty, I laughed a lot, and that’s really not what’s happening on sets like Manchester by the Sea or Blue Valentine. They’re not really a chuckle. It’s nice to go to work and not bleed all over everyone.

When you commit to a project, how much of your decision is instinct versus weighing what you’ve done so far?

It’s kind of an instantaneous thing that really happens in the moment. Sometimes you read a script and it’s so overwhelmingly good, or the character is so overwhelmingly alive, that you think, “I will do anything to make this movie. It doesn’t matter if it’s in Siberia. It would be my honor.” Sometimes your decision is made like that, and those are the easiest ones, really. Sometimes you take in other considerations, such as the director or work you’ve done in the past. I wish there was always a clear, artistic line, but at a certain point, you have to square with the fact that you’re getting older, you live in the world and you have needs. In my twenties, I wasn’t cognizant of retirement, the housing market or college tuition; I just did whatever the fuck I wanted to do. Now, I sometimes do what I want to do, but I also have to make decisions that take care of my family. So the decision-making is all over the place. It used to be one thing, but now it’s many things. 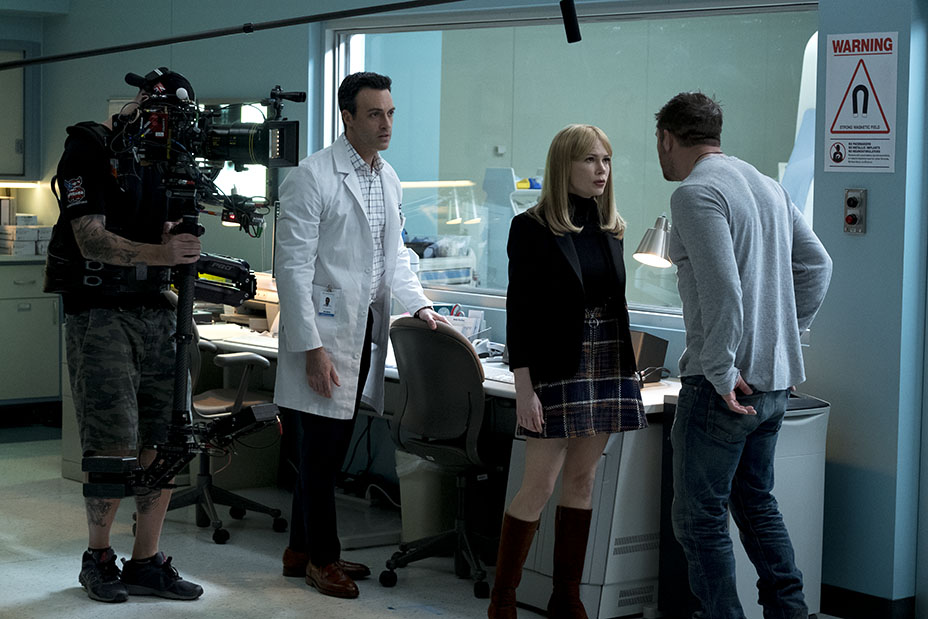 When you’re acting in a heightened world such as Venom, are you hyperaware of this so that it bleeds into your performance, or do you approach the material like it’s any other story you’ve told?

You try to be aware of the world. When I work with somebody like Kelly Reichardt (Wendy and Lucy, Certain Women), I really try and understand what films she’s drawn to and what kind of world she’s drawing so I can become the best inhabitant of it. You need to know the flavor of the world so that you don’t throw it off by having the wrong tone. So, as much as you try, it’s hard in a movie like Venom, since most of it you don’t see until it’s done being generated by a computer and designer.

Since you’ve been drawn to independent film for most of your career, you used to be asked quite often about making blockbuster films. Usually you’d express reluctance without ruling anything out. With Oz the Great and Powerful and Venom now in the books, will you continue to welcome these massive films?

I’m a person who’s drawn to making small films with a small group of people. They have a kind of intimacy and understanding of each other that feels like a family. It’s my favorite place to work; it’s the safest place for me to take risks. But as I’ve gotten older, I’ve wanted to see if I can take that feeling and trot it out into a larger arena. Can I feel safe enough to take risks with a lot more people watching? So that’s been a little exercise for me. The smaller movies are more me; those are the movies I like to see. If I get to see a movie, it’s probably going to be something microscopic or foreign. That’s just my taste. But these kinds of movies open up other opportunities and possibilities in your life. Some people say, “Take one of these movies, and it’ll be even easier to make Kelly Reichardt movies.” Kelly Reichardt had a movie that she wanted to get going this fall. I didn’t have a huge part, but I was going to be in it. She couldn’t get the funding for it, which boggles my mind. If Venom is a big hit, maybe it’ll make it easier for a filmmaker like Kelly to get her movie made. I don’t know. So, smaller movies have my heart, but bigger movies like Venom are enticing because they’re new and fun to me. 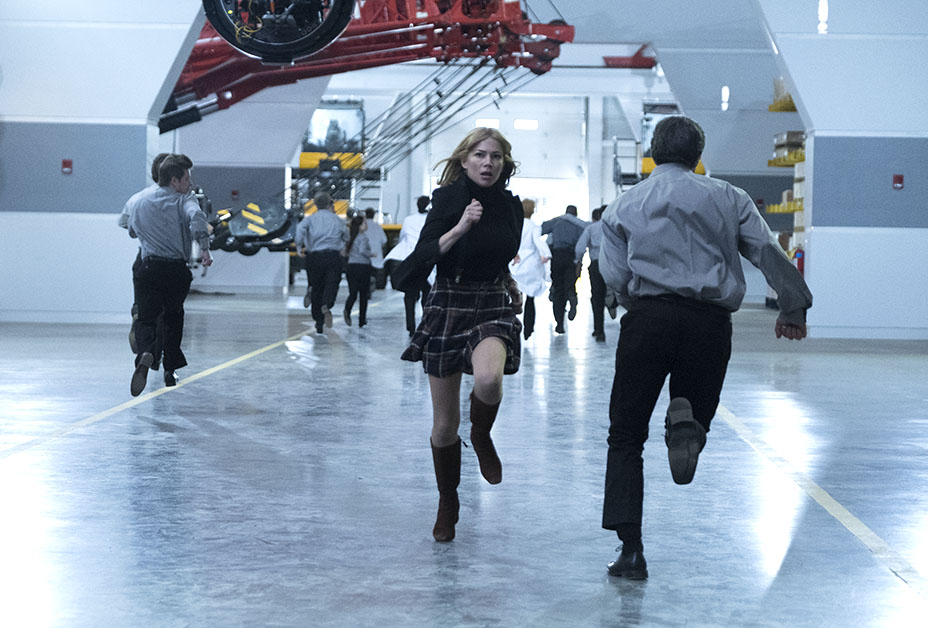 You’ve been acting since you were a teenager. Are you still discovering new aspects of your acting ability that surprise you?

Because I’ve been doing it for so long, I do make some gains in areas. I feel a kind of expansion and release, as well as a new ability in certain pockets. But then, I also run up against the wall of my own ability –– time and time again –– which is the thing that keeps me really interested in acting and really wanting to act. When I feel my own inability, I want to push through it and get better. That desire to get better is what keeps me going.

You started filming Venom in October of 2017, right as the #MeToo movement rocked Hollywood and the world alike. Did the movement influence your choices for Anne Weying?

Hugely. When we started making Venom, I said to the director, Ruben [Fleischer], that I know I can’t exactly wear a #MeToo T-shirt, but that’s the feeling that I want in this movie. There’s a scene where I came up with the line, “I love you, but I love myself more.” There’s this kind of self-love that all the women that I know are trying to go through right now. That includes questions such as: How do I be easier on myself? How do I love myself more? How do I accept myself more? How do I ask for that from the world and from men? First I’m going to treat myself better, and then I’m going to ask that you treat me better. I really wanted those thoughts to be brought out through Anne’s character in whatever ways possible. With her wardrobe, I wanted her to be in suits. If she was in a skirt, I wanted her to be in suspenders. As we’re asking for equality, I just wanted the story to have constant nods to the male-female interplay that is happening now.

Now that you’ve made a comic book movie, do you want to try your hand at playing a superhero someday, perhaps an antihero, especially now that more and more female-led comic book films are getting the green light?

Yes, it’d be really fun. This is a great place to explore feelings and stories of epic proportions. When these films are good, they can provide such a fun outlet for that, both for the actors who make them and the audiences who watch them.

Most franchise films require a commitment for multiple films. If x, y and z happen, are you also signed on for several films in the Venom universe?

Yes, that’s the deal with these movies. If they’ve got a good one that people like, you’ll be making them for the next decade. (Laughs)