[This story contains spoilers for Midsommar]

The maypole resides at the center of the field as an unmoving and ineffective anchor for the young women unmoored by their dance, a pattern of steps and spins that bring them round and round. The women, all dressed in white with flowers in their hair, bump and crash into each other within this dizzying dance. While one by one they fall away, tumbling to the earth beneath them, Dani (Florence Pugh) remains upright, rooted by a force within her, a force made all the more powerful by this place, this stage of ritual and expectation. Her inhibitions slip away, as does her fear, as intoxication leads her, round and round, to circle a feeling long denied to her: belonging.

Ari Aster, who shook horror fans last year with Hereditary, once again explores the relation between horror and home in Midsommar. Hereditary explored that theme inside a small family unit, one so closely tied together by blood and trauma that its members couldn’t see the wrongness of it all until it was too late. Midsommar takes us outside, and like Dani, we are positioned at the borders of the makeshift family unit that makes up the commune of the Harga in Sweden. The “private rituals” that made up Aster’s previous film are still present, but rather than happening in the background through the vague workings of magicks, they happen right in front of the characters with a transparency both alarming and inviting.

It’s difficult to not see the similarities between Midsommar’s opening and the end of the first act of Hereditary. Florence Pugh fully commits to her powerhouse performance as Dani within the film’s opening minutes as she is wracked with grief over the death of her family, all wiped out in an act of murder-suicide by her sister. Dani’s howls of utter anguish echo those of Annie (Toni Collette) in Hereditary, their trauma sharing the same audible similarities as the sound of their names. Dani’s grief drives a further emotional wedge between her and her boyfriend of four years, Christian (Jack Reynor), who lacks the conviction to break up with her out of fear that he might want her again in the future and find her unavailable. Out of guilt, Christian invites the broken Dani to go with him and his friends to Sweden to visit the ancestral home of their mutual friend Pelle (Vilhelm Blomgren). And so, Dani, Christian, Pelle, Mark (Will Poulter) and Josh (William Jackson Harper) head to Sweden for what becomes a harrowing, darkly comedic and inevitable story of breaking up and moving on. 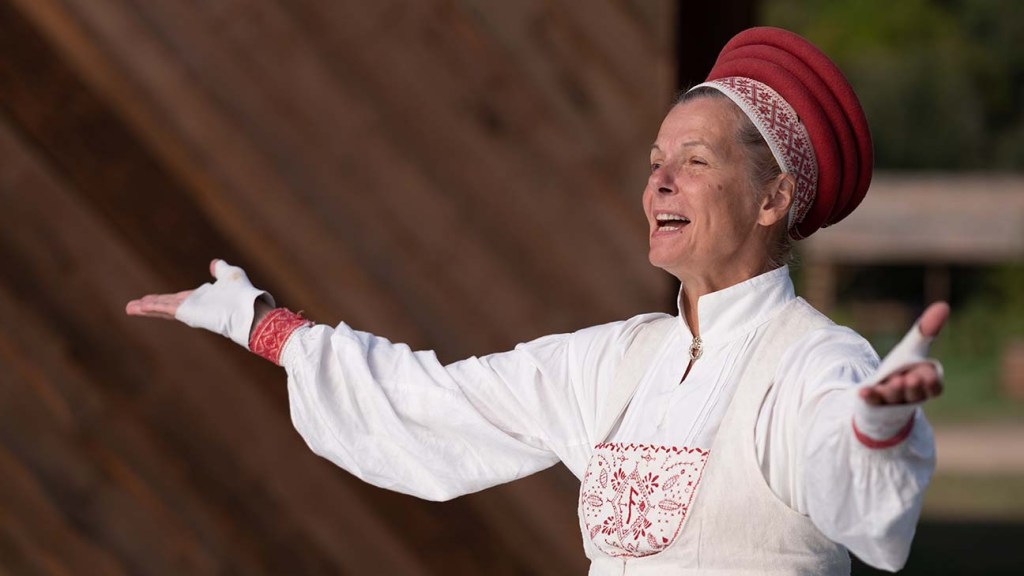 In an interview with The Hollywood Reporter, Aster said Midsommar, beyond being his take on the breakup movie, “is very much a fairy tale.” That sentiment echoes an earlier one shared with Vulture in which Aster described the film as “a Wizard of Oz for perverts.” Those are perhaps somewhat strange descriptions for a film that has been described as one of the best horror movies in recent years. But fairy tales have a wealth of horror — of disguised witches, of blood rites made on the tips of needles, of animalistic transformations and of realizations that there’s no place like home. Aster sticks to the fairy tale format throughout Midsommar, not only in terms of narrative structure, but also characters who serve as allusions to classic archetypes. Dani is the poor (emotionally so) maiden who travels to a faraway land and discovers her royal birthright. Christian is the inept prince whose failures lead to an animalistic transformation. Mark is the jester, whose foolishness is his demise. Josh is the wizard whose quest to acquire more knowledge comes at a deadly cost. And Pelle is the noble knight, the servant of the Harga, who rescues the fair maiden Dani and ensures her place on the throne.

Within this fairy tale we see the eventual fates of these characters foreshadowed by the pagan artworks and tapestries that adorn the lodgings of the Harga. The narrative heritage of the film is present in nearly every scene. It’s not just the Swedish folklore and traditions that Aster studied, alongside those of Germany and England, that make their mark on Midsommar and tease the eventual fortunes of its characters. Also present are more modern folklores, those stories committed on film and referenced both directly and indirectly. Aster spoke to THR, about a number of his cinematic influences, including Alain Resnais, Michael Powell, Emeric Pressburger, and Douglas Sirk. Notably none of those filmmakers would be considered horror directors, although Powell notably directed proto-slasher Peeping Tom (1960), and The Red Shoes (1948), written by Pressburger, which is psychologically horrific in its own right. While Aster doesn’t consider himself a horror filmmaker, preferring not to be boxed in, he has made no secret of the impact of horror on his filmmaking.

Aster, speaking to The Verge in 2018, said “I exhausted the horror section of every video store I could find,” from a young age. Whether intentional or not, Midsommar is populated with references and allusions to horror films. Most apparent of course is The Wicker Man (1973), Robin Hardy’s musical-influenced exploration into pagan horror and the failure of Christianity.  Tobe Hooper’s sun-soaked nightmare The Texas Chainsaw Massacre (1974) is also accounted for in a scene in which the monstrous inbred oracle, Ruben (Levente Puczko-Smith), channeling Leatherface (Gunnar Hansen) wears Mark’s face. And in the final scene, Dani’s cries of anguish shift to elation not unlike Sally’s (Marilyn Burns) as she rides off in the truck away from Leatherface but presumably forever changed by the encounter. Dani’s emotional and mental instability, made worse by her mate being seduced by a pale, red-haired woman is a similar scenario to John Hancock’s Let’s Scare Jessica to Death (1971). That film ends with the titular Jessica (Zohra Lampert) confessing “Nightmares or dreams? Madness or sanity? I don’t know which is which,” and it’s those same sentiments we see across Dani’s face at the end of the film. Yet for all of its horror, there is an undeniable beauty to Midsommar, not only its setting, but in its definition of home.

Where Hereditary, by way of Peter’s (Alex Wolff) perspective, explored paganism as something sinister, Midsommar approaches it as a benevolent power, at least when seen through Pelle’s explanations. While the nature-driven and life-renewing festival becomes a woodshock for his American friends, Pelle presents it as home, a place of belonging where family is not bound by genetics and relationships are not one-sided affairs. “Does Christian feel like home?” Pelle asks Dani, fully knowing the answer and drawing her further into the Harga. There is the direct reading of this, but also a secondary one that reflects the rightness of paganism through the wrongness of Christian. Christian can be looked at as a metaphor for Christianity as seen by the Harga. He’s self-serving, driven solely by his own opportunity for reward and often only acts on Dani’s behalf out of guilt for his sins. The subtle persecution Christian puts her through, the tiny spears he jabs into her side, position Dani as a martyr in their relationship when she has the potential to be so much more. Neither Christian the man nor Christianity the practice, which he exemplifies, are right for Dani. He and it are not home. But the Harga, driven by an empathetic connection in which they literally echo each others’ cries of pain, are the home she’s been searching for. 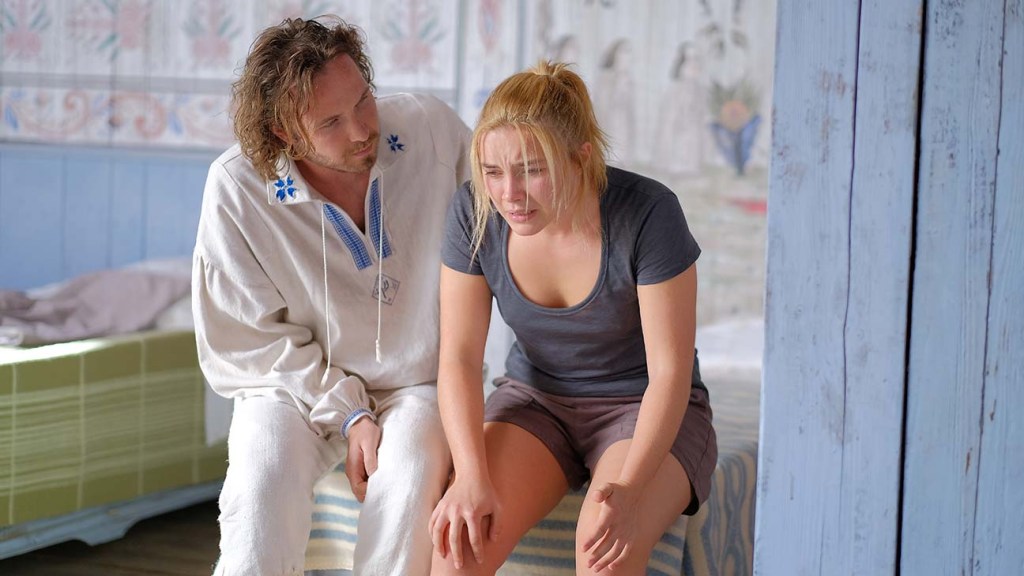 As Dani’s relationship with Christian is further strained as he displays an increasing lack of empathy and investment in his relationships with her and his friends, she begins to feel a greater connection to the commune. The horror that she experiences isn’t a result of what’s happening around her at the commune, but of the aftereffects of what she experienced back in America, and the baggage, including Christian, she has brought with her. So as we feel the shock of the rituals, and are overcome with nausea from the sight of heads splitting open like overripe fruit, mushroom trips that cast viscous shadows over the world and sexual practices that serve as the foundation for this community, we find ourselves in the same headspace as Dani’s traveling companions, rather than Dani herself. Dani isn’t imprisoned by this place, rather she becomes freed by it, aided by her dance around the Maypole and being named May Queen. There’s a moment earlier in the film where Mark asks if they’re going to stop in Stockholm on the way to the Harga. Pelle reminds him that Stockholm is in the opposite direction. Of course any mention of Stockholm creates some conscious connection to Stockholm syndrome. Yet, Harga, in its opposite placement, doesn’t become a place of forced captivity for Dani. The empathy that she finds stems from a genuine sense of being welcomed and feeling a real sense of connection.

Hereditary was built on the ritual of crowning a king, Paimon, a demon in need of a male host. The reward the coven sought for this act was one of earthly riches and wealth. Midsommar is the queen to Hereditary’s king, yet the placement of the crown is more satisfying. Although both films utilize matriarchal rituals, only Midsommar has a matriarchal result. Dani’s rise as May Queen isn’t demonic, and arguably it’s not even supernatural. It’s one built entirely on intense human emotions, and the ability to rid herself of her “worst affekts,” namely the grief over the loss of her family and her attachment to Christian. Her reward isn’t one of material goods, but emotional comfort found in a new family, one that removes her from the crossroad she was nailed to and firmly places her within a ceremonial circle, renewed and unbroken.