Continue to The Hollywood Reporter SKIP AD
You will be redirected back to your article in seconds
Skip to main content
July 2, 2019 10:46am
Logo text

A year ago, Ari Aster put himself on the horror map with his feature debut, Hereditary, a film that divided critics and audiences and would become one of the most-talked-about genre films of 2018. Now Aster is unleashing Midsommar, his follow-up offering, centered around a Swedish midsummer tradition that unravels into a psychological nightmare.

After receiving his MFA in directing from the American Film Institute Conservatory in 2010, Aster gained visibility from his thesis film The Strange Thing About the Johnsons, a dark melodrama involving an incestuous relationship between a father and son. He went on to direct several shorts, among them Munchausen, a Pixar-inspired montage film starring Bonnie Bedelia and Rachel Brosnahan that featured a mother who makes her son sick because she doesn’t want him to leave her and go off to college.

Amid post-production on Hereditary, Aster found himself already in pre-production on Midsommar. “It has been a crazy two and a half years, I haven’t had time to process it,” he tells The Hollywood Reporter. With two feature films in the can, the director has been hailed as a rising star in horror, though he has said he does not consider himself a horror filmmaker.

Directed by Aster from his original script, Midsommar stars Florence Pugh, Jack Reynor and Will Poulter, with cinematography by Pawel Pogorzelski, a returning recruit from Aster’s previous jaunt and a fellow AFI graduate of the cinematography program.

Ahead of the film’s release on July 3, THR spoke with Aster about his literary, cultural and historical influences, as well as the way he approaches his work with a sense of cynicism and a bleak sense of humor.

You’ve described Midsommar as a breakup movie that unravels into a folk horror nightmare. What are the serious relationship-themed fears that you felt compelled to explore within the framework of an existential horror film?

In a lot of ways, Midsommar and Hereditary are both existential horror movies. They’re dealing with fears that have no real remedy; questions about death and whether you can really know the people closest to you. We open the film by having this woman be thrown into a very serious existential dilemma where she is rendered — in one fell swoop — an orphan, and inherent to the film’s trajectory, the story is very much a fairy tale. At least, that’s how I see it. I wanted to present a dynamic in which neither party is awful to the other one, but they’re absolutely wrong for each other. By virtue of the fact that we’re aligned very clearly with one character in the film, the other is immediately reduced to an antagonist. Even if you consider the extremes of the movie, he’s sort of hinted as a villain despite the fact that most people should be able to put themselves in his shoes and have probably been in a relationship where they have been callous to the other person or created distance in a way that’s not different from what Christian does in the film.

What sort of literary, historical and cultural references did you draw upon?

I did a lot of research into Swedish folklore and midsummer traditions, as well as traditions that have nothing to do with midsummer, [some] native to Germany and England. I especially did a lot of research into different spiritual movements, and those were in some ways the richest well that I drew from. Beyond that, I was thinking about different fairy tales and visual artists like Joel-Peter Witkin, who was on my mind when I was working with the prosthetics artist on the corpses. And I learned the runic alphabet. 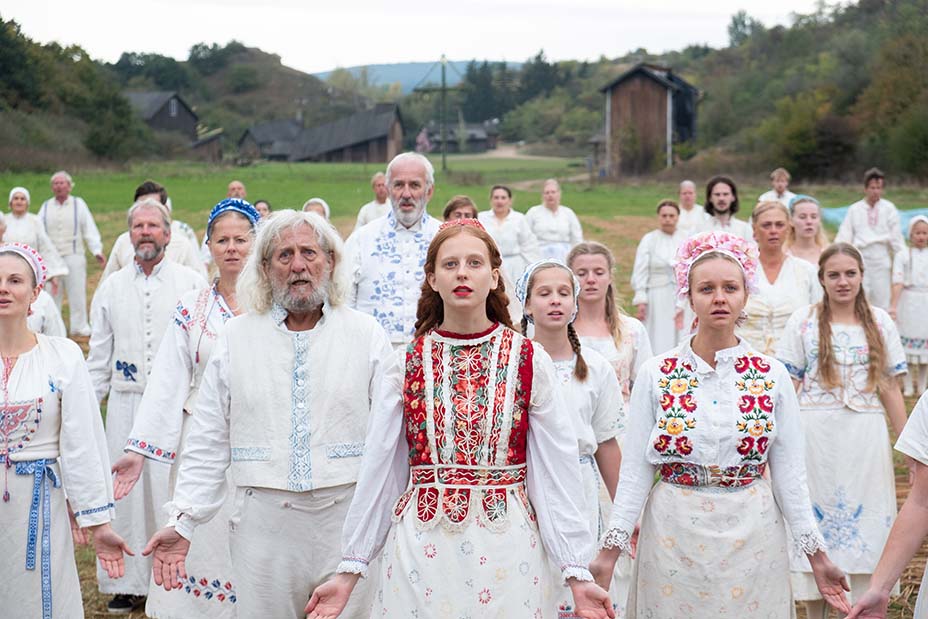 Who are some lesser-known directors you admire and reference for their ability to provide psychologically jarring cinematic experiences that really say something about the human condition?

A director who was great with dramatizing the psychology of his characters was Joseph Losey; he deserves more credit. And he’s not lesser-known, but I haven’t really talked about him much — Alain Resnais is really good at finding a cinematic language for his characters’ psychological states, especially through montage, but also through mise-en-scene. He’s somebody who I have been thinking about a lot. I’m a big lover of melodrama, and I do see Midsommar as a contribution to that tradition of taking characters’ inner states and then matching the world of the film to what’s happening inside. It’s tied to expressionism in a way. This is nothing new for me to point to [Michael] Powell and [Emeric] Pressburger or Douglas Sirk, but those are filmmakers that I’m always thinking about. I’ve also been thinking about John Sturges a lot lately. You know, a film that I’ve been thinking about a lot is one by Larisa Shepitko called The Ascent, which is a brilliant Russian film. Another filmmaker  is Elem Klimov — I know a lot of filmmakers feel the same way I do about Come and See, which is a perfect movie. I also really love a film of his called Agoniya (Rasputin), and I found myself thinking about that as well. It should also be mentioned that he and Shepitko were married.

As well as being a cinephile, you also consume art in a big way. Who are some artists that challenged you to consider the relationship between tone, color and story?

There were a lot of artists who I was thinking about when we were working on the production design of this film, and many were theosophical artists, just because I saw a lot of ties between theosophy and the world we were building here. Frantisek Kupka was one. When I came back to New York after shooting the film, there was an exhibition of Hilma af Klint, and she was incidentally someone who we were talking about a lot while we were developing the film. I mentioned Witkin earlier; he’s a photographer who’s very married to the macabre and works a lot with real corpses. Sometimes actors pose as corpses, but very often he works with [actual] dead bodies. He marries the beautiful with the grotesque in a really striking way. I also was able to commission a work from one of my favorite contemporary artists, Mu Pan, a modern [Hieronymus] Bosch. His painting opens the film; it’s a mural on two wooden panels that open like curtains. 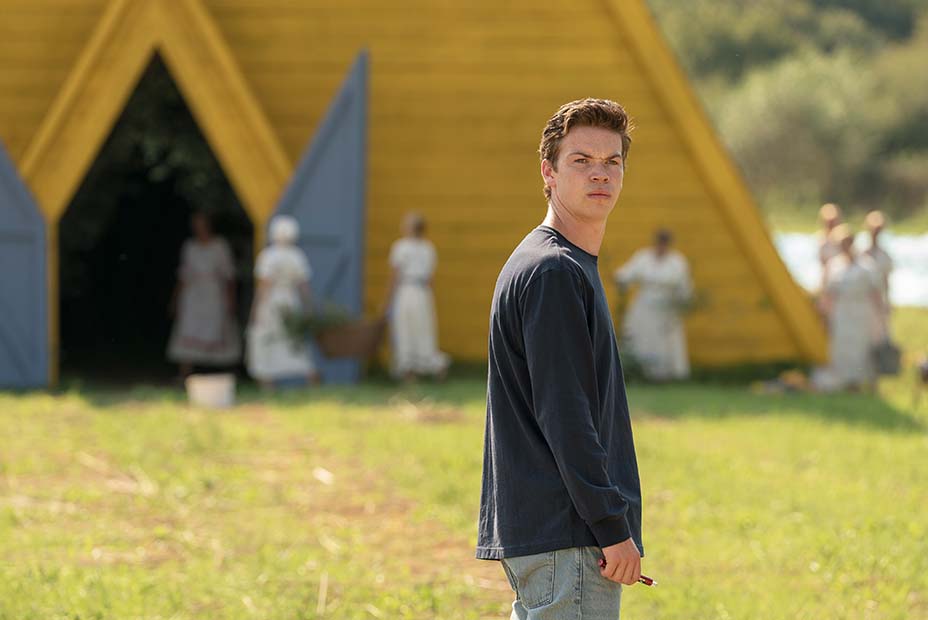 You’ve said that you don’t identify as a “horror director” and that you don’t have a specific mission as a filmmaker, though you do seem to be exploring  a certain off-kilter tone and visual style that is memorable for its unusual qualities. Do you approach stories from a particular mindset or worldly perspective?

I approach many things with a certain cynicism, and I have a very bleak sense of humor. I see Midsommar as a dark comedy, if you really just consider the arc of Dani [Pugh]; there’s something comic about where the movie ends. With these last two films, I did want to take suffering seriously, and for them to have a certain weight. And I definitely try to approach everything from a place of character, though if you go back to my shorts, that wasn’t always true. I sometimes approached things in a more clinical way when I was playing with medium. I don’t have a mission, as you said, but I’m compelled by images and tones. I find myself chasing feelings when I’m making films. I like the idea of telling stories through color; almost treating stories like music and feeling your way through it. (Pauses) It’s very hard to expound without sounding like a bozo.

Oh, I just remembered another filmmaker who I think is really great at depicting people’s psychological states, and that would be Kim Ki-young, who did The Housemaid. He’s a Korean filmmaker.

And Shohei Imamura is another filmmaker I really really love, especially his film Profound Desire of the Gods. He’s great at mirroring high and low art, and he makes these elegant and immersive exploitation films that are beautifully considered and epic in scope. I think he was [Yasujiro] Ozu’s assistant, and there’s a tradition in Japanese cinema of filmmakers serving as other filmmakers protégés and then going on to explode what their mentors were doing. There couldn’t be two filmmakers more unlike each other than Imamura and Ozu.

I’ll regret not coming up with more.