In Minari, Soon-ja (Yuh-Jung Youn) moves in with her daughter’s family in Arkansas, where her grandson complains that she’s not like other grandmas.

“They bake cookies! They don’t swear! They don’t wear men’s underwear!” David nags at Soon-ja, who in his view is coarse instead of cuddly, preferring to watch pro wrestling and chug Mountain Dew over softer, more stereotypical pursuits.

That same countercultural spirit could describe Youn herself, the Korean screen legend who was writer-director Lee Isaac Chung’s only pick for the role of Soon-ja. Making her American film debut exactly 50 years after her first movie (Kim Ki-young’s 1971 psychosexual thriller Woman of Fire), the 73-year-old’s dynamic and ultimately heartbreaking performance as a grandmother like no other has earned her a slew of accolades on the awards circuit, culminating in a frontrunner position for best supporting actress at the Academy Awards.

“I’m just a very challenging person, maybe,” Youn says, in English, of her career-long attraction to unconventional characters and scenarios. Adds Korean cinema scholar Kyung Hyun Kim — a professor of East Asian Studies and Visual Studies at UC Irvine who also co-produced one of Youn’s films, 2010’s The Housemaid — “She always went against the grain of the chaste womanhood in television and movies. As Korea was coming to terms with modernity [in the late 1970s], out of a period of really dark dictatorship that required women to sacrifice themselves, she was completely the opposite. She’s been the most maverick of actresses.” 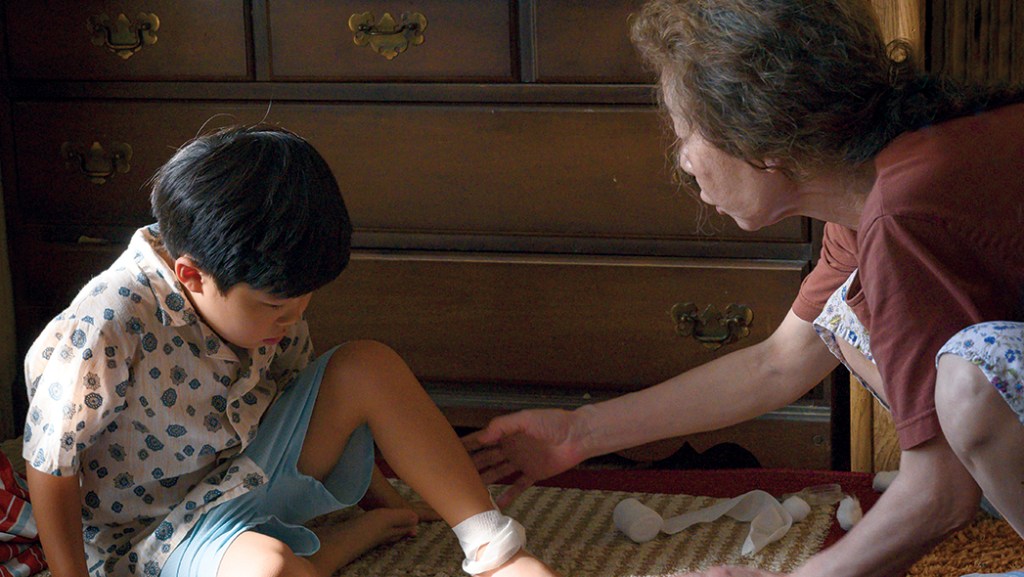 Despite her clear gift for the craft, Youn says she turned to acting out of what she characterizes as necessity, or lack of options, more than once in her life.

The first time, she was not yet 20 and failed to clear the bar on the nationwide college entrance exam to get into one of Korea’s elite universities. “It was very shameful. I felt so sorry asking my mother for tuition to go to a secondary college, so I was looking for a job,” says Youn, whose father had died earlier.

While touring a television station, she was offered a gig at a game show to stand next to the emcee and hand out prizes. A director at the station encouraged her to test for the drama division, which she did reluctantly, having no training in acting. “That’s how I became an actress,” she says with chagrin. “Most talent, they see some movie or theater work and fall in love, but not me. It’s a very shameful story.”

After a handful of TV dramas, Youn landed the lead in Woman of Fire, the second installment of Kim Ki-young’s infamous Housemaid trilogy. The iconoclast director (“At the time, I didn’t know he was a genius; I just thought he was very weird,” says Youn) had the then-22-year-old exploring her range as an eager country girl who takes a job serving a bourgeois family, discovering her sexuality, enduring two rape sequences — and, in one experience Youn still remembers viscerally, handling live mice. 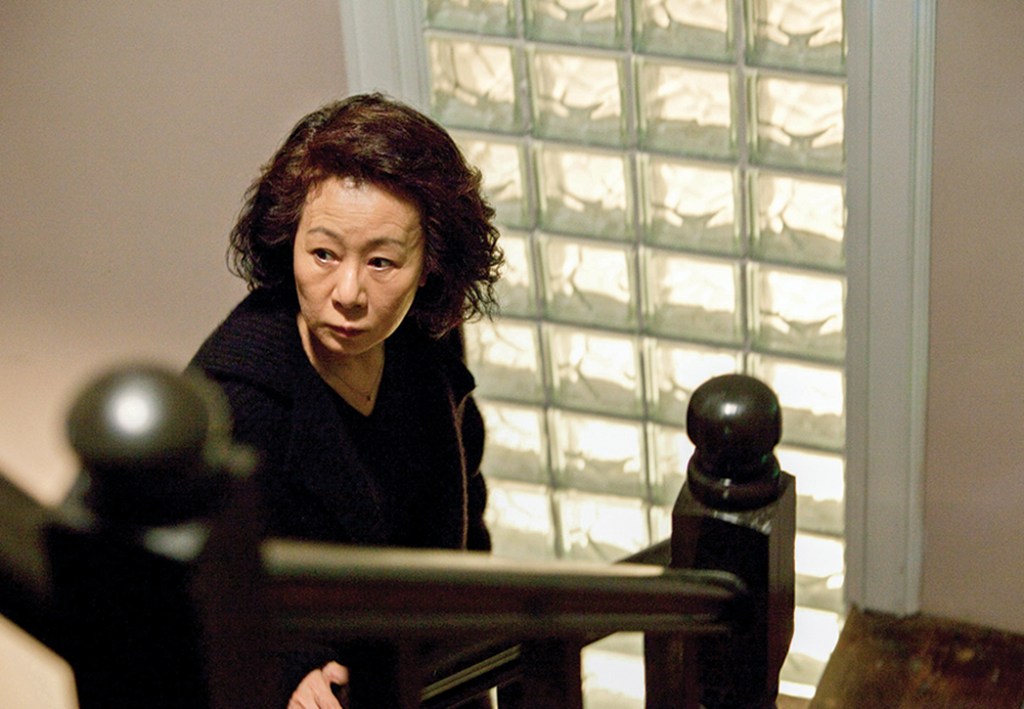 For her efforts, Korea’s Blue Dragon Film Awards nominated Youn for best new actress, and as the likely recipient, she was urged to attend. She didn’t win that category. “Oh my goodness, they lied to me,” Youn told herself. An industry nobody amid a sea of strangers, she tried to sneak out of the venue but a guard stopped her. “You should not be going out in the middle of the ceremony,” he reprimanded, so she slunk back to her seat. And then her name was called for best actress.

The second time Youn “became” an actress was in her 40s. A decade-plus prior, she had shot to the top of Korea’s entertainment scene through her gutsy, unorthodox roles onscreen and her equally idiosyncratic persona. At 28, she had married playboy singer-songwriter Cho Young-nam, and as a celebrity power couple their wattage was magnified — until it very suddenly blinked out altogether upon their immigration during the mid-1970s to the U.S. Youn gave birth to two sons, immersed herself in her evangelical church in St. Petersburg, Florida, and considered herself effectively retired from that brief chapter in her life in which she had been a movie star half a world away. “In my time, if you want to get a leading role, you were not supposed to marry because the male audience would like to imagine you’re not,” she says. “So because I got married, that means nobody would use me.”

But life — and perhaps destiny — had other plans. After 10 years of marriage, the couple divorced, and the newly single mother of two, now back in Korea, once again found herself at a crossroads after a significant personal setback. She still owned a house in Florida, and she considered returning there. “Should I work for Publix as a cashier?” she wondered. “Then I found out the minimum wage was something like $2.75 an hour. I thought, ‘I cannot raise my boys. I cannot pay my mortgage. I don’t have any skills. What can I do?’ ”

Her friends recommended that she return to acting, but she was unsure of her bona fides. “Nowadays, all [actors] graduate from film school, but I don’t have any actor training,” she told them, but her friends reassured her that what made her different was an asset, not a liability.

Youn restarted her career at the bottom, taking small supporting roles in television dramas. “Some people said, ‘Wow, Youn Yuh-jung is playing that small part, that’s terrible,’ ” she recalls of the reception at the time from the public — those who remembered her, that is.

“But I am the one who needed the money. That’s why I did all those roles, whatever came to me,” she says, raising her voice in defiance. Reflecting on those dark years, Youn says she grew depressed but threw herself into her work, running her lines over and over again and discovering the nuances in each inflection. She emerged feeling confidence on the set for the first time: “That was the turning point I think I really became an actor.”

Beginning with Kim, Youn has been a muse to several generations of Korea’s auteur filmmakers, fearlessly throwing herself into their creative visions, whether it’s disrobing at age 65 for a sex scene in Im Sang-soo’s The Taste of Money (in which she plays a rich woman who takes revenge on her cheating husband by bedding his assistant and having his mistress killed) or nearly getting herself set aflame when Chung let Minari‘s climactic barn-burning scene run a little too long. 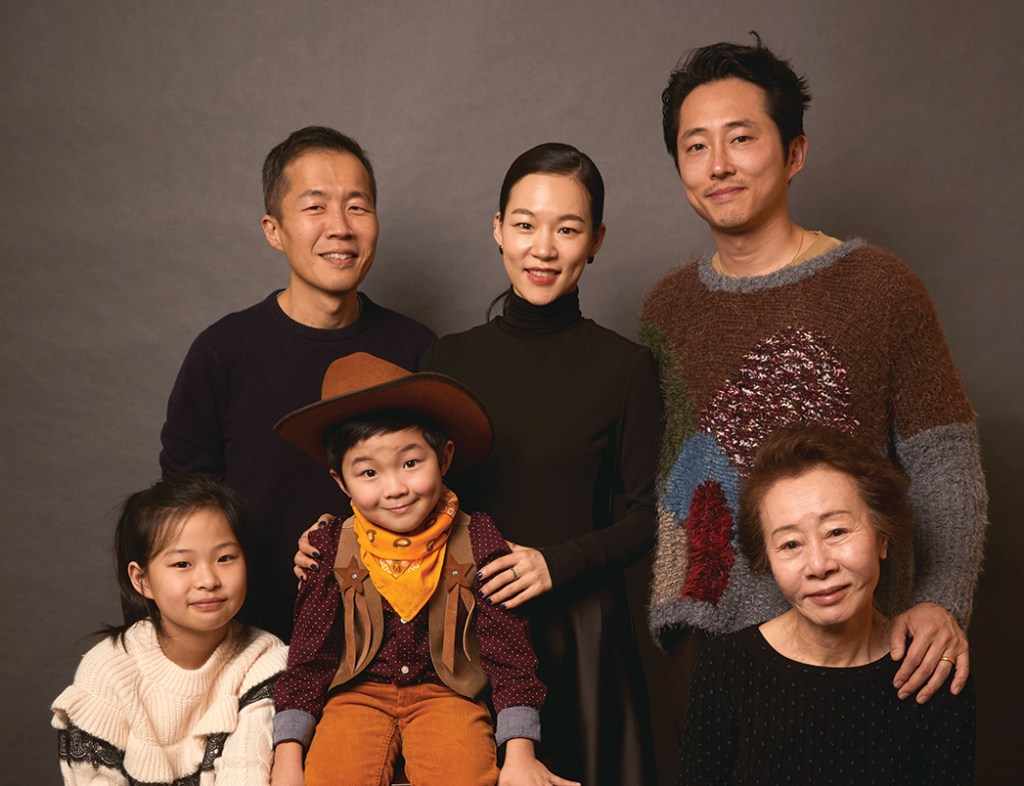 “I’m a very old-time actress. My principle is that until the director says ‘cut,’ I should go on,” she says with a laugh. “So I kept trying to put out the fire [per the scene direction], and he’s not yelling anything. It turns out Isaac forgot to say ‘cut.’ “

Chung was perhaps in part mesmerized by Youn’s performance in his autobiographical drama, although by design it was not an impersonation of his own real-life grandmother. “When we were making the film, I just knew internally that what she was doing is masterful,” he says. “I hoped people would take notice.”

They obviously have, and now Youn finds herself having defied the odds a third time, a septuagenarian Korean actress who finds her prospects brighter and broader than ever, although she modestly demurs that the only Western roles she’d be eligible for are “Korean immigrant lady who cannot speak fluently,” while also noting that ageism against actresses is a persistent and universal condition. Still, she already is shooting another Hollywood production: the Apple TV+ series adaptation of Min Jin Lee’s acclaimed novel Pachinko, a multigenerational, globe-spanning epic about a Korean family that will feature Youn’s character as the protagonist at the center of the story.

Not bad for an actor who never meant to become an actor — and remain one. “If I was in this business without that [hiatus] period, I’d probably hesitate,” says Youn, speaking specifically of tackling the racy content in Taste of Money, but her words could just as well apply to the entire arc of her journey. “But I’ve been through much difficulty in my lifetime, so I felt like it was nothing. I’m just playing somebody else. I became a very daring woman myself.”

'Minari' Broke New Ground for Storytellers of Color, But Creatives Don't Want to Be Pigeonholed