In writer-director Channing Godfrey Peoples’ debut feature, Miss Juneteenth, Nicole Beharie stars as Turquoise Jones, a single mom to teenager Kai (Alexis Chikaeze) living in a suburb of Fort Worth, Texas. Balancing two jobs, Turquoise does her best to set high standards for her daughter, hoping Kai will stray from her own path and go off to college and seek a career. What will set Kai on that path (or so Turquoise believes) is the local Miss Juneteenth pageant, an event that honors the historic day — June 19, 1865 — when enslaved people in Texas finally learned about the Emancipation Proclamation two years after the fact. The pageant also earns the winner a college scholarship, a prize that Turquoise herself won as a teen when she was crowned Miss Juneteenth before her unexpected pregnancy derailed the future she envisioned for herself.

“I thought I’d be playing a dolled-up former beauty queen,” Beharie tells THR of her initial reaction to the script. The role would turn out to be much less glamorous. “I remember being under the sweltering Texas sun, in my Daisy Dukes and cowboy boots. There was no powder, no gloss, no lashes. Turquoise was unadorned — she wasn’t the pageant mother I had in mind.”

Beharie, known for her work on Fox’s Sleepy Hollow and as Rachel Robinson, the wife of Chadwick Boseman’s Jackie Robinson, in 42, herself was raised by a single mother after her parents’ divorce, and she saw a familiar spirit in Turquoise, describing her as the type of woman for whom “no one is rolling out the red carpet.” Beharie admits that stepping into a no-frills role — exacerbated by the indie film’s tiny budget — was her first challenge. “Channing would often say that everything in the film needs to feel like it’s past its expiration date,” Beharie says. “I want to survive as a Black woman and actress, and there’s some dissonance there for me. I had to embrace all of my wabi-sabi,” she says, speaking of the Japanese aesthetic that values imperfection. “This movie is asking you to hold your gaze on people [who live on] the periphery, leading simple lives.” 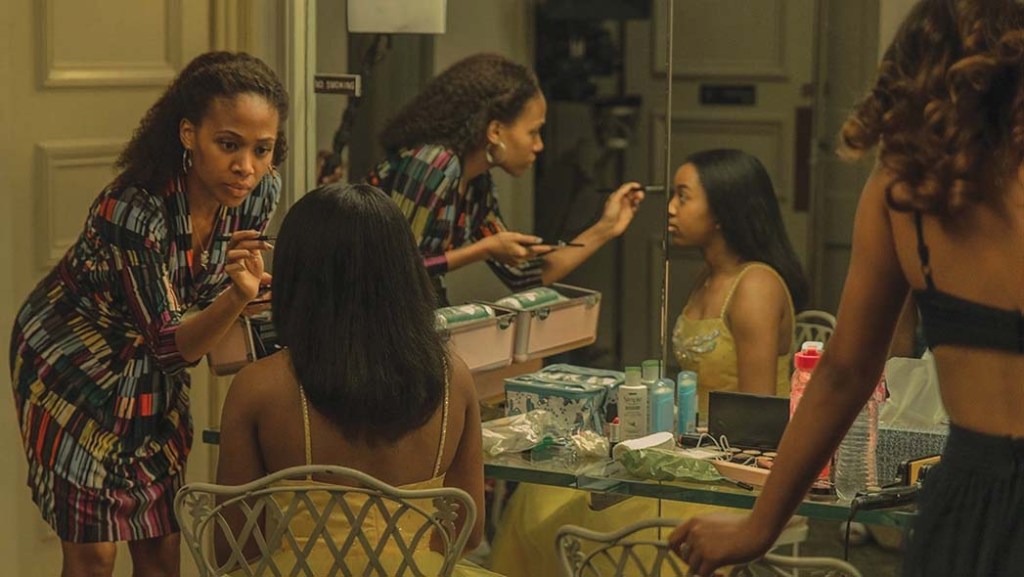 Miss Juneteenth is a slice-of-life film about the Black community in Fort Worth; it’s lacking in manipulative melodrama or big moments in which adversity is overcome. Turquoise puts in a lot of work to prepare Kai for the pageant, even if the latter seems less interested in the experience than the former. Circling the pair throughout the film are their friends and neighbors portrayed mostly by first-time local performers. Beharie, who moved around as a child before her parents’ divorce while her father was in the foreign service, connected immediately to the film’s collective elements, inspired by the director’s own upbringing. “This is a love letter to her community and to the women in her community, specifically,” she says. “I have never experienced that kind of small-town feel like when I was down there in Texas.”

One of the film’s major themes centers around Juneteenth as a symbol for freedom. “I feel like many people had never even heard of Juneteenth until this past year,” Beharie says, admitting that she also wasn’t familiar with the holiday until signing on to the film. The protests in the wake of George Floyd’s police killing last summer forced, in Beharie’s view, many Americans “to see the reflection of that hidden history in the present day.” Juneteenth is a celebration of emancipation after the fact — when freedom was technically earned, but not provided in realistic terms. “When the movie was released last June, we had communities questioning: What is freedom? Are we there yet? When do we get our full citizenship? What does it mean to be a citizen, and what are our rights?”

But for Turquoise, the Miss Juneteenth pageant represents a personal emancipation: She sees it as Kai’s ticket into a part of society closed off to them. It doesn’t come easily. In one scene, Kai is ridiculed by the pageant’s organizers for not knowing the difference between salad knives and dinner knives, alienating her further from the other young women who feel more at ease. “You have to play by these particular codes in order to survive,” Beharie says, noting that requiring the best from everyone may actually stifle the greatness that some can offer. “Those things that are supposed to be the ticket to freedom in some ways are restrictions of who you are allowed to be — or they may ask you to negate parts of yourself and your creativity.”

Miss Juneteenth received near-universal critical acclaim upon its release and has earned awards buzz after Beharie won a Gotham in January for best actress. But the win and the film’s fortuitous release on what may have been the most important Juneteenth in modern memory simply reiterate for Beharie the importance of storytelling through art — and telling stories about those who go unnoticed: “I keep thinking of the phrase, ‘Don’t look away. Don’t avert your eyes.’ ”