“Like all mothers, I think my kids are fabulous. But mine really are,” says Polly Draper with a laugh.

The thirtysomething actress is, of course, talking about her actor sons Alex and Nat Wolff, who appear with Mom in Stella’s Last Weekend, which Draper also wrote and directed. The comedy (opening Oct. 12 via Paladin in New York and L.A. before expanding the following week) revolves around brothers who reunite at their childhood home to put their beloved dog, Stella, to sleep — and are blindsided when they discover they are in love with the same woman.

“I knew that I could probably get the movie made just based on their steam,” Draper says of 23-year-old Nat (The Fault in Our Stars) and 20-year-old Alex (Hereditary). Fred Roos, who has produced all of Francis Ford Coppola’s movies, financed the film, which shot in 2017 in New York, where Draper lives with her jazz pianist husband Michael Wolff, the film’s composer.

Draper, 63, was doing parent-helmer duty well before it became a 2018 trend: Lea Thompson directed daughters Zoey and Madelyn Deutch in The Year of Spectacular Men and Peter Hedges cast son Lucas in Ben Is Back, which is garnering awards buzz after its Toronto premiere, as is Rashida Jones’ doc about Dad Quincy. But the Emmy-nominated Draper previously created The Naked Brothers Band for Nickelodeon, which she directed and starred in opposite Nat and Alex from 2007 to 2009 (Dad was music adviser for the hit series, which also spawned a movie and video game).

“It makes sense,” says Draper of the growing number of Hollywood parents directing their kids. “In this case, I was writing [Stella’s Last Weekend] specifically for my kids. In Peter’s case, he was writing specially for Lucas. I think that we know what our kids are capable of, and it’s usually a lot more than they’re allowed to show in other people’s work.”

That is a point echoed by Alex. “She understands my strengths best,” he says. “Every one of my actor friends will work with her on their auditions or movies and she’ll always make them better.”

As to whether it was easier directing her sons now than when they were 6 and 9, Draper doesn’t hesitate. “Oh, my God, night and day,” she says. “When they were little kids, they would say things like, ‘Mom do I have to do this take? Can I go? I was right in the middle of a pinball game.'”

As a bonus, the family adopted the film’s titular dog before production started. In one scene, Draper’s character and Nat’s try to get Stella stoned, and in the process Mom and son get high together. But that generation gap would never be bridged in real life. Jokes Draper: “Anytime I’ve ever tried to get stoned, I hallucinate.” 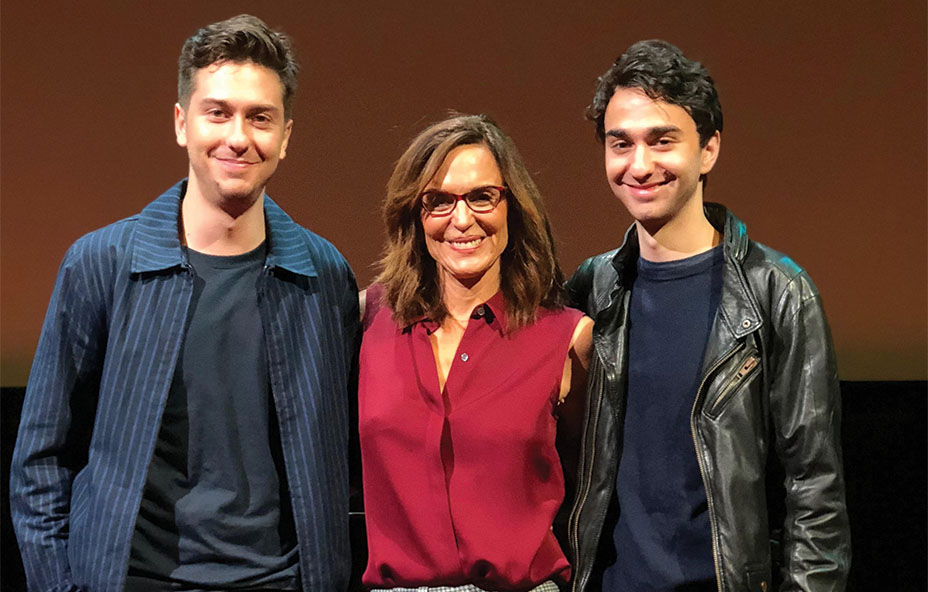