In late October, European governments — in Germany, Italy and France — shuttered movie theaters, again, amid a rise in COVID-19 infection rates. In the U.S., New York has allowed most theaters in the state to reopen as of Oct. 23, but New York City cinemas remain shut. It’s a similar story in Los Angeles, where a rise in average daily new coronavirus cases makes it increasingly unlikely that L.A. county theaters will be allowed to reopen soon under California’s safety guidelines.

Film distributors and exhibitors, battered by the first COVID-19 lockdown in early March, had hoped the worst was behind them. Outside the U.S., box office returns in countries that had reopened have been climbing steadily — albeit from a lower level, the result of restrictions on theater capacity in most places. Warner Bros.’ Tenet has topped $340 million globally, while such indie releases as After We Collided ($48 million) and Greenland ($34 million) arguably have overperformed, thanks in part to the lack of competition from studio titles, most of which have moved to next year. And, in Japan, the animated Demon Slayer the Movie broke opening weekend records Oct. 16-18 en route to a $102 million haul in the country.

Now everyone is preparing for a cold winter. Governments say theater closures — and re-closures — are necessary in order to stem the spread of the coronavirus. Like restaurants, bars, clubs or gyms, cinemas are an indoor area where large groups gather and thus are potential COVID-19 hotspots.

But the future of moviegoing might not be entirely bleak. Early research into how the novel coronavirus spreads, and the risk of infection in closed spaces, suggests that all indoor entertainment is not created equal. “I think we can look at going to the cinema as being, compared to other indoor activities, quite safe,” says Hendrik Streeck, a professor of virology and the director of the Institute of Virology and HIV Research at the University of Bonn in Germany. “There has not been, to my knowledge, a single incidence where a cinema was the site of a superspreader event.”

Notably, countries where cinemas did not close during the pandemic — including South Korea and Japan, which employed some social distancing — have not seen reports of that kind of event at a movie theater. Nor have there been any in countries such as Great Britain, France or the U.S., where cinemas were initially shut down and allowed to reopen.

Just because no one has traced an incidence of COVID-19 infection to a cinema, however, doesn’t mean it’s never happened. Or couldn’t happen. On Oct. 28, when Chancellor Angela Merkel introduced new lockdown measures for Germany, affecting all public entertainment venues including theaters, she said they were necessary because in “75 percent of cases” it’s impossible to determine where a person got infected. Germany’s track-and-tracing system is among the best in the world, and the country has a government-backed contact-tracing cellphone app, yet it still has only a 1-in-4 chance of determining where a superspreader event took place. 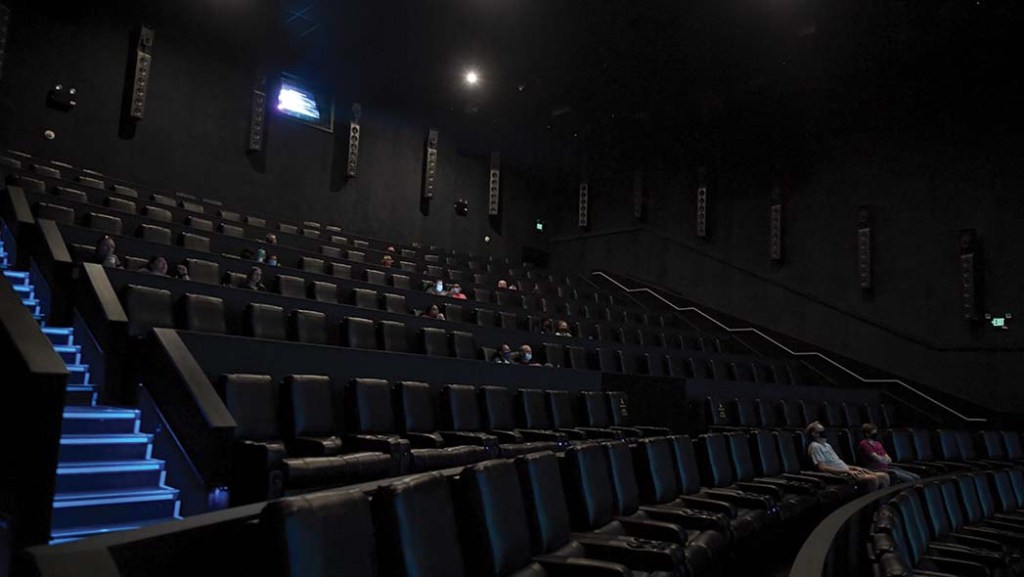 Scientists can point to several probable factors for why cinemas may be a less risky COVID-19 environment. People are most likely to become infected by droplets coughed or sneezed by someone nearby. That’s why social distancing and wearing masks are key to reducing transmission. But behavior matters too. Talking expels droplets. Talking loudly, singing or shouting expels even more. “You don’t tend to yell, sing or talk loudly in a movie theater,” notes Streeck. “You mainly sit quietly, facing forward. That behavior reduces the chances of viral spread.”

Ventilation also is important. A study undertaken by Berlin’s Hermann Rietschel Institute, on behalf of local exhibitors group HDF, found that even if movie theatergoers did not wear masks, the amount of aerosol — the concentration of those infectious droplets — they inhale would be “just 0.3 percent” of what they’d suck in if working in an office. “Cinemas are big, voluminous spaces, and they typically have very good ventilation systems, which greatly reduces aerosol concentration,” says Anne Hartmann, the research associate at HRI who conducted the study.

Cinemas, however, aren’t likely to be exempted from new lockdown orders. “We know you can’t be 100 percent assured that there is zero percent chance of transmission,” says David F. Goldsmith of George Washington University’s Milken Institute School of Public Health. But Goldsmith — who was a medical adviser on the CinemaSafe program, the COVID-19 theater safety guidelines developed by the National Association of Theatre Owners — claims that going to a theater is “just as safe” as going to “a grocery store” if moviegoers “are wearing masks, separating at least six feet and using hand sanitizers.”