In the Oscar-nominated documentary My Octopus Teacher, filmmaker Craig Foster explores the remarkable relationship that he forms with an octopus while free diving in an underwater kelp forest in South Africa’s False Bay. But he wasn’t the only one to be moved by this unlikely bond between man and cephalopod: Foster’s friend and cinematographer Roger Horrocks found the experience to be profoundly moving.

“Obviously, there was a great deal of trust [from the octopus] with Craig,” the DP says. “I was never there without Craig, so my instinct was that this trust was transferred onto me. That obviously enabled us to get the material, because some would never come out of their holes. I mean, she was quite phenomenal in that regard.”

The relationship between Foster, who had reached a point of exhaustion from work and found renewal through diving, and the sentient invertebrate was one that Horrocks marveled at, even though his interaction with the pair was intentionally limited. “I didn’t really want to get involved too much in that relationship. I felt that it was really between Craig and the octopus,” he explains. “There’s the scientific kind of gestalt, which says that there’s the strong line between animals [and] humans, and they’d be fundamentally different. My experience has taught me otherwise.”

Foster and Horrocks had worked together previously on several docs, including Discovery’s Into the Dragon’s Lair, about papyrus caves in Botswana, and — notably — they teamed on an octopus sequence for BBC’s Blue Planet II. “I wanted to do some sequences in the South African kelp forest, and I had kind of an idea of a story, but it wasn’t powerful enough. Craig mentioned the behavior of the octopus, where it hides in shells and protects itself from sharks. And that really was the start of us working on the Blue Planet sequence. We amassed massive archive material because we were doing so much time in the water. It was out of that archive that we were able to make Octopus Teacher.”

To lens the underwater footage in the doc — directed by Pippa Ehrlich and James Reed and available on Netflix (Foster served as producer) — Horrocks used his go-to Red Dragon digital camera with a Nikon 1755 lens. “On the Super 35 sensor, it kind of gives you about a 24 to 70mm coverage, which is really optimal,” he says. “We can’t change lenses underwater, so that kind of gives you enough of a wide [shot], but then also that ability to get in tighter to get the coverage that you need for characterization.”

Foster, meanwhile, used Panasonic’s smaller Lumix Tough waterproof camera. “Even though we were shooting on different formats, we were collaborating in terms of style, and that really helped to create a coherent visual look,” Horrocks relates, adding that, unlike Foster, he used scuba gear during filming. “I would have just missed too much if I’d been free diving [as Foster did].”

Their diving site, not far from Cape Town on South Africa’s southwestern coast, presented its own set of hurdles. “It’s very shallow and very surge-y, so trying to keep the camera steady was always going to be a challenge,” Horrocks says, adding that weather and safety constantly factored into their shooting schedule. “We had to shoot it over quite a long period of time to pick the good days.”

This also meant they had to work quickly, often seizing short windows in which the waters were at their calmest and the light was just right. But, he says, their patience frequently paid off: “[It’s] such a spectacular environment that when the light was right, even a locked-off shot or a steady shot just looked absolutely phenomenal.”

While safety was always a concern, the Emmy-nominated Horrocks — who apprenticed with underwater cinematographers Didier Noirot, a longtime Jacques Cousteau collaborator, and the BBC’s Doug Anderson — laments that during his time shooting at False Bay, he never encountered one of the region’s great whites in the kelp forest. “Craig actually has encountered a great white shark swimming in that area,” he says. “We unfortunately never got the chance. I would love nothing more than to film a great white shark in the kelp forest. I think, as a general rule, they know that you’re not a seal, but I have a huge amount of respect for them. They certainly get your heart going when you see them.”

That’s not to say My Octopus Teacher is devoid of sharks, which posed challenges beyond mere safety. At one point in the film, the octopus is hunted by smaller pyjama sharks, forcing both filmmakers to grapple with their roles as documentarians, especially given the unusual bond that had developed. “Craig speaks about it very well in the film, and it really is something that one struggles with,” Horrocks says of shooting oceanic life. “It’s very, very difficult not to try to intervene. I must say, I’m finding it harder and harder not to get involved.” 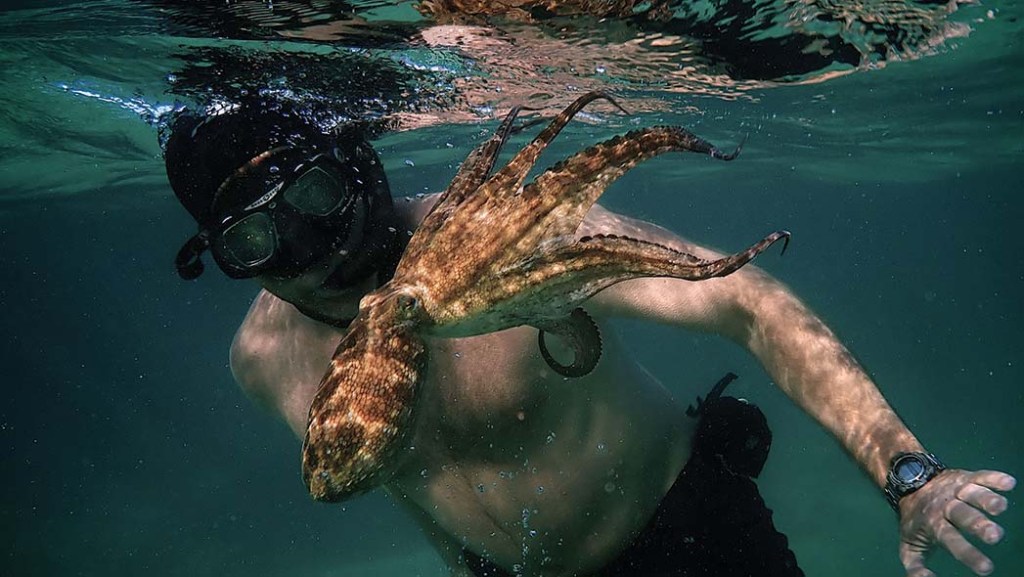